Taking a different look at how U.S. copes with coronavirus 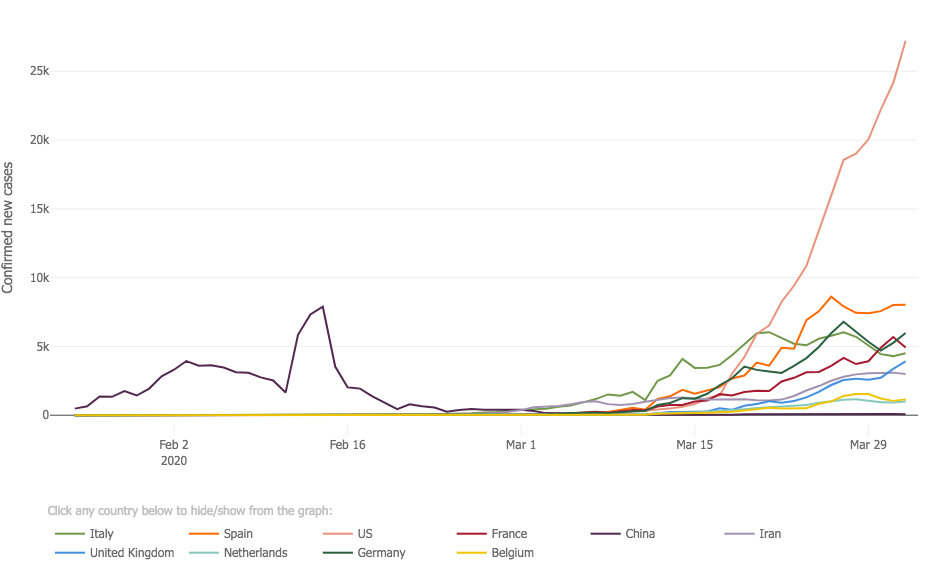 This graph represents the five-day moving average of daily confirmed new cases of SARS-CoV-2 in the world among the 10 most affected countries. According to this graph — which looks solely at raw numbers — the United States is exploding in new cases compared to the top nine other countries. But does this data paint the whole picture?
Courtesy of Johns Hopkins University & Medicine
Support Local Journalism

There are now more than 1 million confirmed cases of people infected with SARS-CoV-2 — the virus that causes COVID-19. And by nearly every news account available, when it comes to accusations of a country that's handling it the worst, fingers are pointed directly at the United States.

That's not surprising. A quarter of the world's confirmed cases — some 246,000 as of Thursday — were confirmed right here in America. In terms of raw numbers, that's more than any other country. In fact, it's more than No. 2 and No. 3 on the world chart — Italy and Spain — combined.

Yet, how is the United States coping with the virus so far? Obviously, numbers say a lot. As do shortages in supplies, hospital beds, and a death toll that continues to tick higher and higher, adding more and more families that have been touched by the worst of the coronavirus.

But numbers don't always tell the whole story.  In fact, a lot of the discussion about how high the number of cases are in the United States is leaving out a key fact — the United States is the third largest country in the world, in terms of population, and it's being compared with countries that are a fraction of its size.

Sure, 246,000 is 246,000 more cases than anyone would want to have in the United States. But calling America the "epicenter" isn't exactly accurate, at least when such numbers are examined in a different context.

According to Johns Hopkins University & Medicine, as of Thursday, these were the 10 countries with the most confirmed cases of SARS-CoV-2:

The United States is sixth on that list, with 0.075 percent of the population confirmed infected. That's less than 8/100ths of 1 percent of America's population.

The country among those 10 with the worst rate of virus infection? Spain, with its 112,065 cases, accounts for 0.24 percent  — nearly 4 times what the United States has accounted for so far.

If the above list is re-arranged to account for percentage of population infected, it actually becomes this:

The first confirmed cases in Spain came nine days after the first cases in the United States, according to Johns Hopkins. Yet, for the United States to reach the same percentage of its population infected as Spain, it would need to add another 540,000 cases.

New cases are exactly what many observers are playing close attention to. If new cases begin to drop, it could suggest a country might finally be getting a handle on the pandemic.

As of Thursday, April 2, these were what Johns Hopkins listed as the top 10 countries in terms of growth rate.

But once again, when population is taken into account, the list changes dramatically.  China remains at the bottom because zero is zero. But the United States, even with nearly four times the new cases as Spain, falls to No. 3 on such a growth list, with Spain at the top.

Belgium, with its 1,384 cases, might be No. 8 in overall numbers. But in terms of population percentage, that small European country is actually No. 2.

Keep in mind — these are all still staggering numbers, and SARS-CoV-2 remains a very deadly virus, with more than 53,000 deaths worldwide.

But it's always good to ask questions about numbers, and to ensure when some numbers are compared to others, that they are done in a way that's fair to each other. The United States could indeed overtake the rest of the world at some point in terms of how much of its population is infected. But it's not there yet.