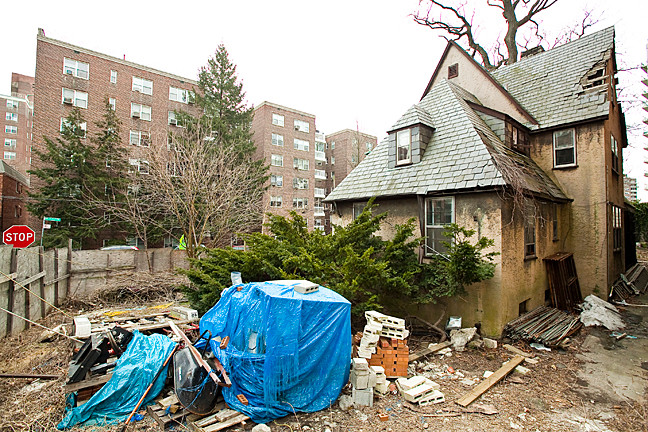 Neighbors say the only residents at this home on West 238th Street and Blackstone Avenue are raccoons, skunks and vermin, creating worries about health effects.
Marisol Díaz/The Riverdale Press
By Ashley Helms

While walking her dog on a recent morning, Gladys Gonzalez expressed disgust at the dilapidated state of a vacant stucco home at 620 W. 238th St. She said raccoons, skunks and vermin have taken up residence at the house, adding that she has observed the critters roaming the property from her apartment terrace across the street.

Following months of complaints from neighbors about the house, the Department of Buildings (DOB) issued an Environmental Control Board violation on March 27 to indicate the property does not comply with city construction codes. The applicable building permit had expired in 2010.

A company called Blackstone 238, LLC currently owns the property. The DOB said the owner has until May 6 to admit the violation and certify a correction, or the owner must appear before the Environmental Control Board on May 16.

The property was previously owned by Josh Neustein, a Riverdalian who was deemed the city’s worst landlord by then-Public Advocate Bill De Blasio in 2012 for the open violations in Mr. Neustein’s buildings. But Mr. Neustein said he sold the property in December.

“We’re out of [ownership] and don’t have any information. I think the new owners planned to knock it down and build something nice there,” Mr. Neustein said in a phone interview.

According to the sale deed provided by Mr. Neustein, Blackstone 238, LLC bought the property for $990,000. The city register finalized the document on Jan. 29.

Assemblyman Jeffrey Dinowitz, who lives near the house and has urged the city to evaluate the property since July, said that if a developer bought the property with the intent of rehabilitating it, the developer should probably tear it down and start from scratch.

“It looks very slum-like in its appearance,” Mr. Dinowitz said. “It doesn’t seem there is any enforcement taking place here.”

Amy Neustein, who described herself as Mr. Neustein’s estranged sister, said she would like to see the city take over the house. She added that neighbors could be at risk, and that curious children or a family pet that jumped a protective fence around the property could be killed if the house collapsed.

“Neglect is an understatement,” Ms. Neustein said. “The whole thing is preposterous.”

Neighbors said they think the house is beyond the point of no return.

Bernie Feeney, who lives nearby the property, said he often sees rats surrounding the house. Mr. Feeney believes that there is not much, if anything, that can be done to salvage the home.

“I would bet they’re going to tear [the property] down,” Mr. Feeney said.