Dinowitz grabs early lead, but fate up to rankings 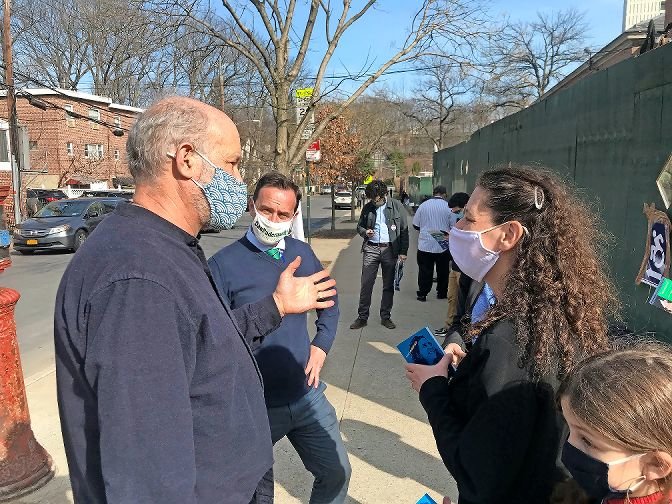 Jessica Haller and Dan Padernacht talk to an early voter outside of P.S. 81 Robert J. Christen on Tuesday afternoon in an election where fewer than 10 percent of eligible voters showed up. Haller and Padernacht both finished behind Eric Dinowitz and Mino Lora in the first round of tabulation in the ranked-choice special election to see who will fill Andrew Cohen’s final year on the city council.
MICHAEL HINMAN

Claiming we are a slush fund of tens of thousands of dollars is idiotic and ridiculous. This sounds to me like a move of a failing campaign struggling for an issue.”
Ben Franklin Club president Michael Heller
By MICHAEL HINMAN

It’s now Eric Dinowitz’s race to lose, although he’ll have to wait three weeks or so to find out if he’s going to be the area’s next city councilman.

Dinowitz, son of Assemblyman Jeffrey Dinowitz, captured more than 40 percent of top choices in a race where less than 10 percent of eligible voters participated in. That’s not enough, however, to score an outright win, meaning this race now moves into ranked-choice counting.

Once all the absentee votes are received in the coming weeks, the city’s elections board will start the process of elimination, beginning with retired New York Police Department detective Carlton Berkley. Then, one-by-one, each of the candidates with the lowest vote total after every round is eliminated until there are just two candidates left.

Mino Lora, a non-profit executive director out of Spuyten Duyvil, would need a minor miracle to catch up to Dinowitz. But it could happen — if voters who selected Jessica Haller and Dan Padernacht first ranked Lora higher than they did Dinowitz at a significant rate.

Haller had joined Lora to convince voters to make them the top two choices. If that move was successful, Dinowitz could find himself with a much more narrow win at the end — or even possibly in second place behind Lora.

If the Queens special election race that ultimately elected Selvena Brooks-Powers to the seat previously held by Donovan Richards is any preview to what might happen in this race, we may not know a final result until April 15.

Yet, even that race hinted the initial count might be a strong indicator ofhow the race will shake out. On election night Feb. 23, Brooks-Powers had just a 200-vote lead over Pesach Osina. But once the additional rounds were over, Brooks-Powers added more than 1,000 votes, while Osina tacked on just under 200.

The rest of the candidates were ultimately eliminated in reverse order as well, revealing the initial top five would be the final ranking in that race.

Whether that will happen in this particular race is still yet to be seen.

In the days leading up to Tuesday’s final balloting, Haller hit Dinowitz with her version of a “November surprise.” She filed an official complaint with the New York City Campaign Finance Board charging that both Dinowitz and the Benjamin Franklin Reform Democratic Club were not fully disclosing in-kind contributions and expenditures related to the race to fill Andrew Cohen’s former seat.

“Any political organization in New York City may endorse and financially support a candidate so long as it follows the campaign finance laws and rules,” Haller wrote in a March 10 letter to the board, which she released on social media a week later.

“Unfortunately, the Benjamin Franklin Reform Democratic Club has refused to publicly disclose its finances. This lack of transparency creates a real risk that the organization’s bank account — partly financed by the father of its endorsed candidate — is being used illegally as a slush fund to provide tens of thousands of dollars worth of free services in the form of office space, mass mailings, posters, leaflets, phones, etc., to the Eric Dinowitz for Council campaign in the shadows, and without knowledge of regulators, voters, or the media.”

Haller is attempting to shine some more light on what has been an ongoing discussion for years on the role of political groups like the Ben Franklin Club plays in elections, and how much it should be disclosing through public campaign finance filings.

In fact, The Riverdale Press has reviewed these publicly disclosed contributions to the Ben Franklin Club, finding that it has received just under $280,000 from political candidates since 2010. A quarter of that has come from Eric Dinowitz’s father, Assemblyman Jeffrey Dinowitz, who has paid out nearly $65,000 to the club from his campaign coffers over the past decade.

Candidate contributions to the club have fallen in recent years, especially after some of the biggest payers were voted out of office and replaced with lawmakers who aren’t as friendly with the Ben Franklin Club. State Sen. Alessandra Biaggi, who defeated Klein in 2018, has publicly withdrawn from the club, while U.S. Rep. Jamaal Bowman — who upset Engel last year — has never had a formal relationship with the club.

Haller claims the Ben Franklin Club has provided far more services to back the younger Dinowitz’s city council campaign than the $1,400 cash payment his campaign has reported.

Dinowitz, however, took to social media last week, calling Haller’s complaint “another day and another lie.”

“Jessica, the CFB rejected this because it’s not true,” Dinowitz tweeted.

A spokesman for the campaign finance board says the agency doesn’t comment on complaints, instead referring a reporter to its procedures on how complaints are handled. The agency “reviews and responds to all complaints,” according to that procedure, and if the campaign finance board “determines that the complaint does not merit investigation or is not in substantial compliance with complaint filing requirements, the board will notify the party complaining its rejection.”

A request for comment to Dinowitz’s campaign on what he was basing his claims the agency rejected the complaint, was not returned last week.

Haller later told The Press there were no lies in her complaint.

“The letter is an investigation into possible violations,” she said. “That the (Ben Franklin Club) has not disclosed its finances is true. That there is great risk of impropriety is also true. That the relationships are intertwined is well-documented. And true.”

Michael Heller, president of the Ben Franklin Club, said he was not aware of the complaint until a reporter shared it with him last week.

“Claiming we are a slush fund of tens of thousands of dollars is idiotic and ridiculous,” Heller said. “A rental payment has been made to the club, for a specific time frame, for campaign purposes, and that’s it. This sounds to me like a move of a failing campaign struggling for an issue.”

Whether Haller’s campaign is indeed struggling is yet to be seen. The city must wait for all absentee and overseas ballots to arrive before it can implement the additional rounds of vote counting as part of the ranked-choice system.

The process involves eliminating the lowest vote-getter, and then counting their next available choice. This continues until there is just two candidates left, and one achieves a true majority.

Election officials said this count should be completed sometime in early April.

The winner of this special election will fill the final year of Cohen’s term. The former city councilman resigned his seat at the end of last year after being elected as a Bronx Supreme Court judge.

No matter what happens here, anyone looking to represent this area on the city council — including Tuesday’s ultimate winner — must turn around and compete in the June primaries. The Democratic winner of that race is expected to cruise to an easy victory in November, and then serve on the council until the end of 2023.

All of Tuesday’s candidates except Kevin Pazmino are expected to run in the June Democratic primary, joined by social worker Abigail Martin and political organizer Marcos Sierra.

Martin already has raised more than $41,000 for the race, giving herself a significant head start not just among those who competed in the special election, but also Sierra, who has raised just $6,300 so far.

Not declaring victory just yet

Lora seems to already have her attention redirected to the June primary.

“Whatever the final outcome is once ranked-choice analysis is done, it’s clear they will come at us even harder in the June primary,” Lora said in a statement Tuesday night. “It’s also clear that we ran the strongest campaign, and we look forward to having the support of the other candidates as we fight to win the June 22” primary.

Dinowitz, however, told The Press Tuesday night that he wasn’t declaring victory just yet.

“We have to wait for the absentee ballots to be counted, but I feel very good about the numbers that came in,” the former school teacher said. “We had a broad coalition of support throughout the entire district. We have a plurality of support everywhere.”

Dinowitz wouldn’t comment directly on the slim possibility Lora could get enough lower-ranked votes to give him a serious challenge in a few weeks, but said he leaves his fate to the ballots that have been cast.

“That’s the work I’ve done as a Democratic district leader, to make sure voting is easy and accessible,” Dinowitz said. “We need to make sure every vote is counted, but until that happens, I am not declaring victory until everybody’s voice is heard.”