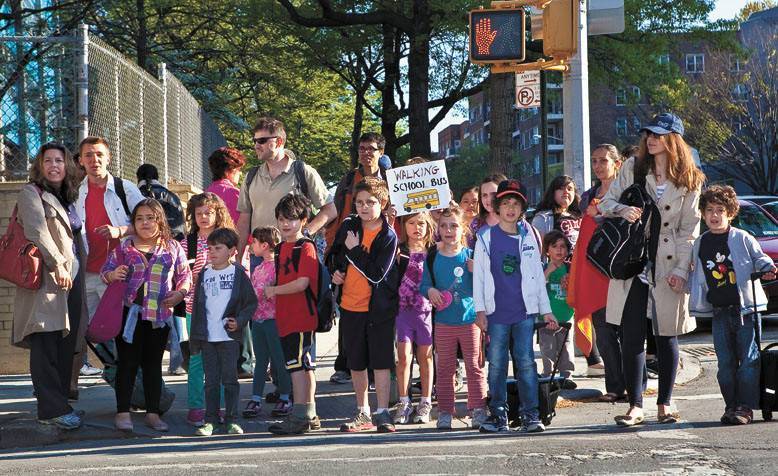 Students and parents flood the corner of 236th Street and Independent Ave on Walk to School Day in April 2012.
Marisol Díaz/The Riverdale Press
By Maya Rajamani

Seven schools in District 10 in the northwest Bronx made Comptroller Scott Stringer’s list of the city’s 59 most overutilized facilities, including P.S. 95, the Sheila Mencher School, on Hillman Avenue.

The Department of Education (DOE) failed to reduce or adequately monitor overcrowding in schools from 2010 to 2012, a new audit by Mr. Stringer’s office has found.

In the Bronx, the July 8 audit found 36 percent of schools were overutilized in the 2010-2011 school year — a figure that did not budge the following year, in keeping with a lack of progress citywide.

The comptroller’s office used the DOE’s own data and method for determining overcrowding, which compares actual enrollment to building capacity for each school

“We see District 10 as an extreme example of what’s happening around the city,” said Leonie Haimson, executive director of Class Size Matters, which advocates for smaller class sizes in schools.

The audit also faulted the DOE for the way it deals with overcrowding, saying the department fails to maintain and document policies, procedures and implementation and accused the DOE of using “misleading” statistics.

The report said in the 2010-2011 and 2011-2012 school years, the DOE’s “Blue Book,” which compiles school utilization statistics, did not account for students attending classes in trailers near their schools. The audit said that resulted in inaccurately reflecting the amount of space each school offered, making authorities underestimate the need for additional space.

While the comptroller’s report focused on the last two school years during the Bloomberg administration, Community Education Council (CEC) president Marvin Shelton said the problem has persisted for the past eight years.