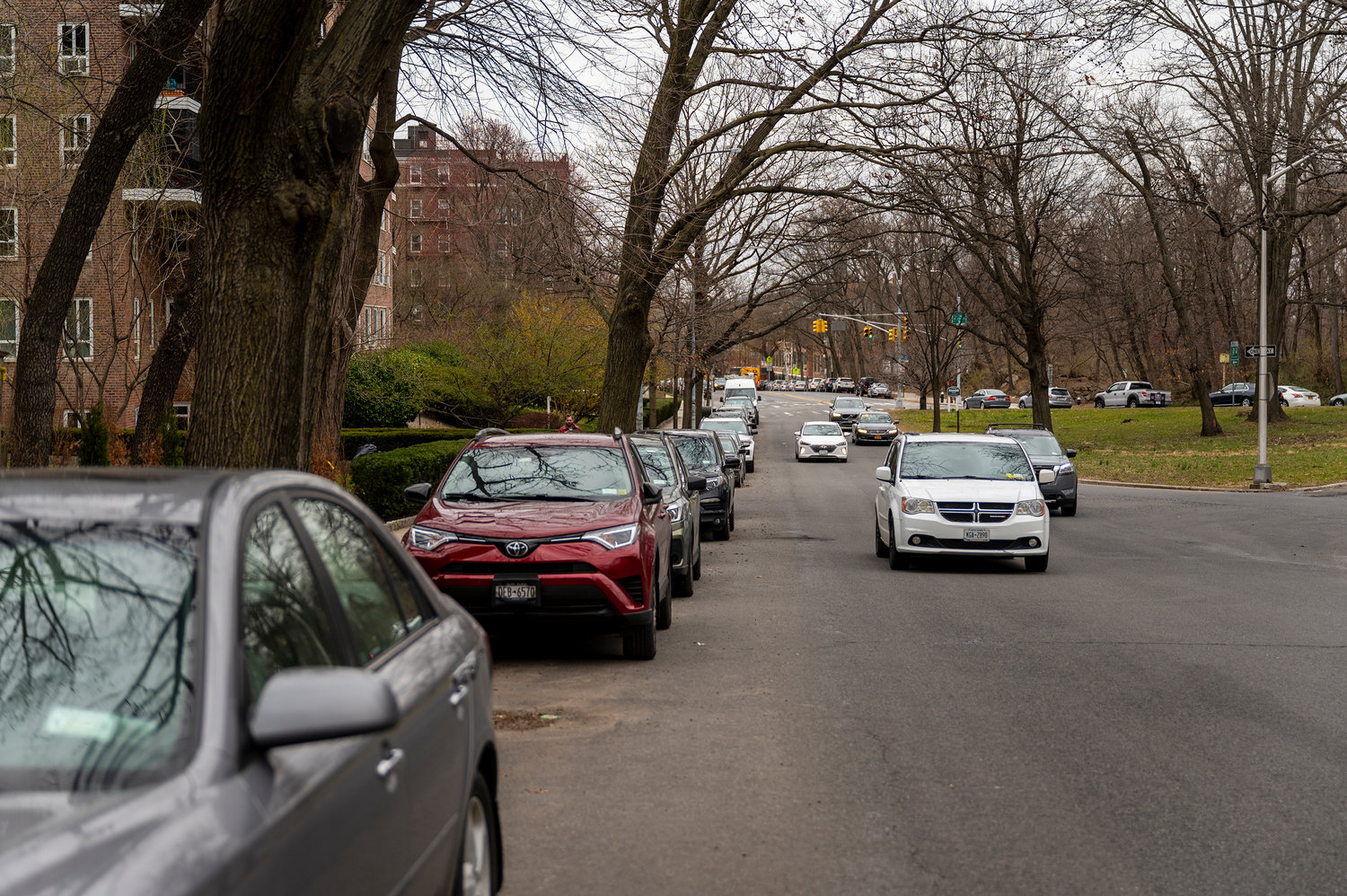 Some areas on Riverdale Ave seem almost impossible to either share a lane or take one away. If bike lanes are added on West 254th Street the road will be extremely tight. As traffic goes southbound and a slight merge of the highway to Henry Hudson Parkway is no shy cry away.
Hiram Alejandro Durán 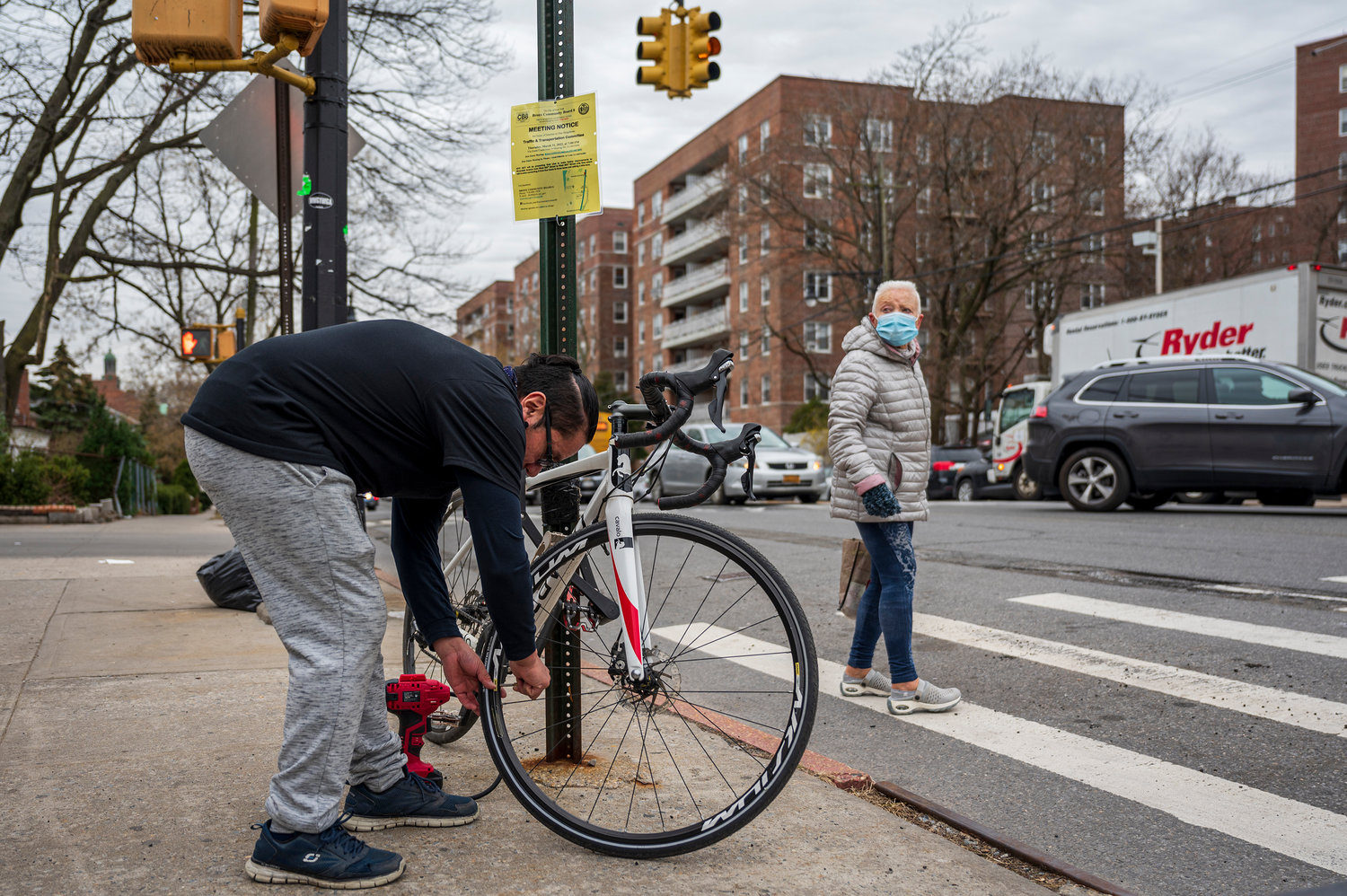 On Riverdale Ave there are very few cyclists in the area. If the DOT does through with this plan there is a chance that some might ride their bike to work and feel safe doing it.
Hiram Alejandro Durán 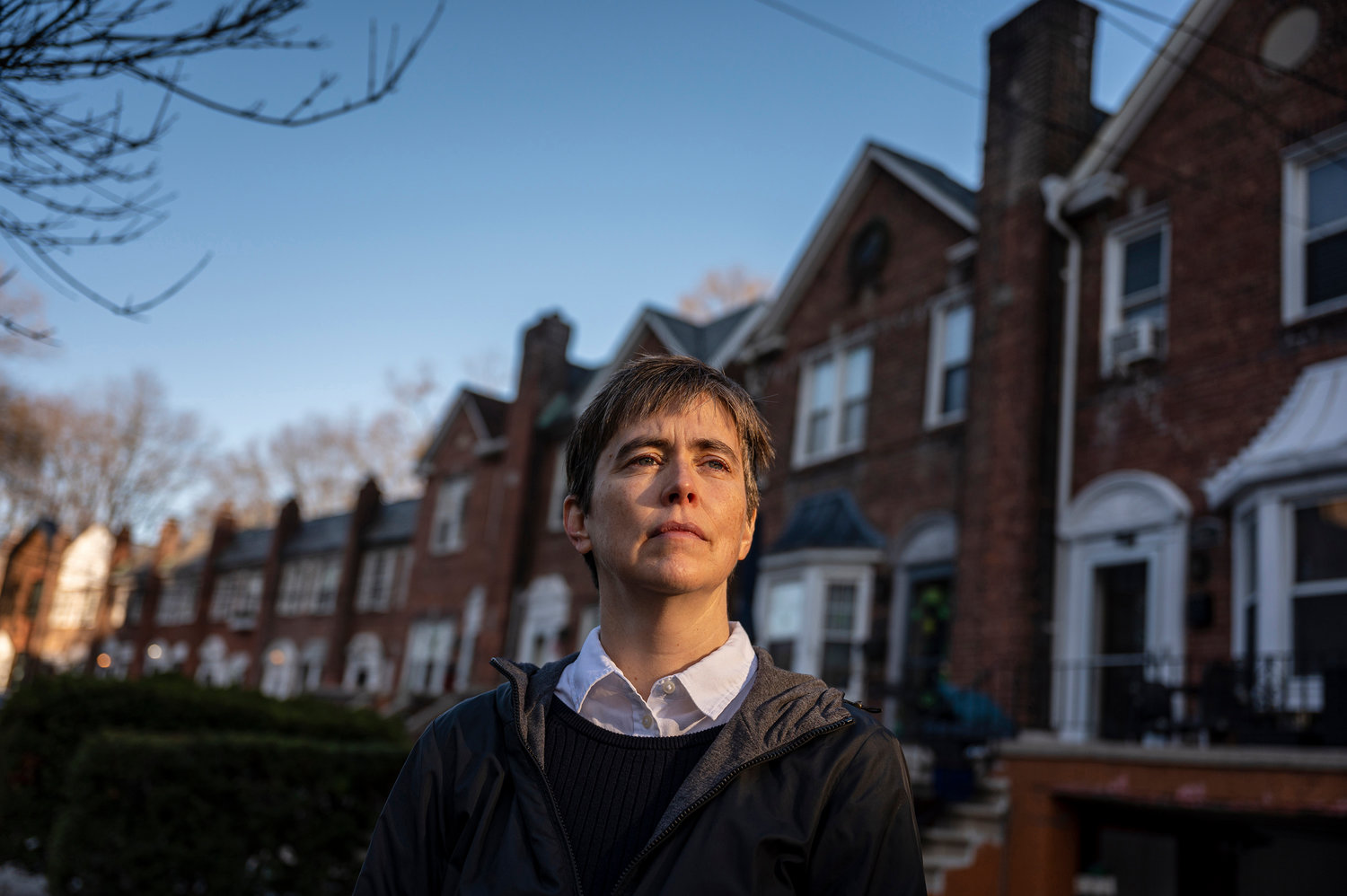 Deb Travis is a pro activist on cyclists because she believes it promotes health and slow down global warming. Travis is not extremely upset about the new proposal but being the Traffic and Transportation chairperson she still considers if the DOT would be fare in situations like this.
Hiram Alejandro Duran 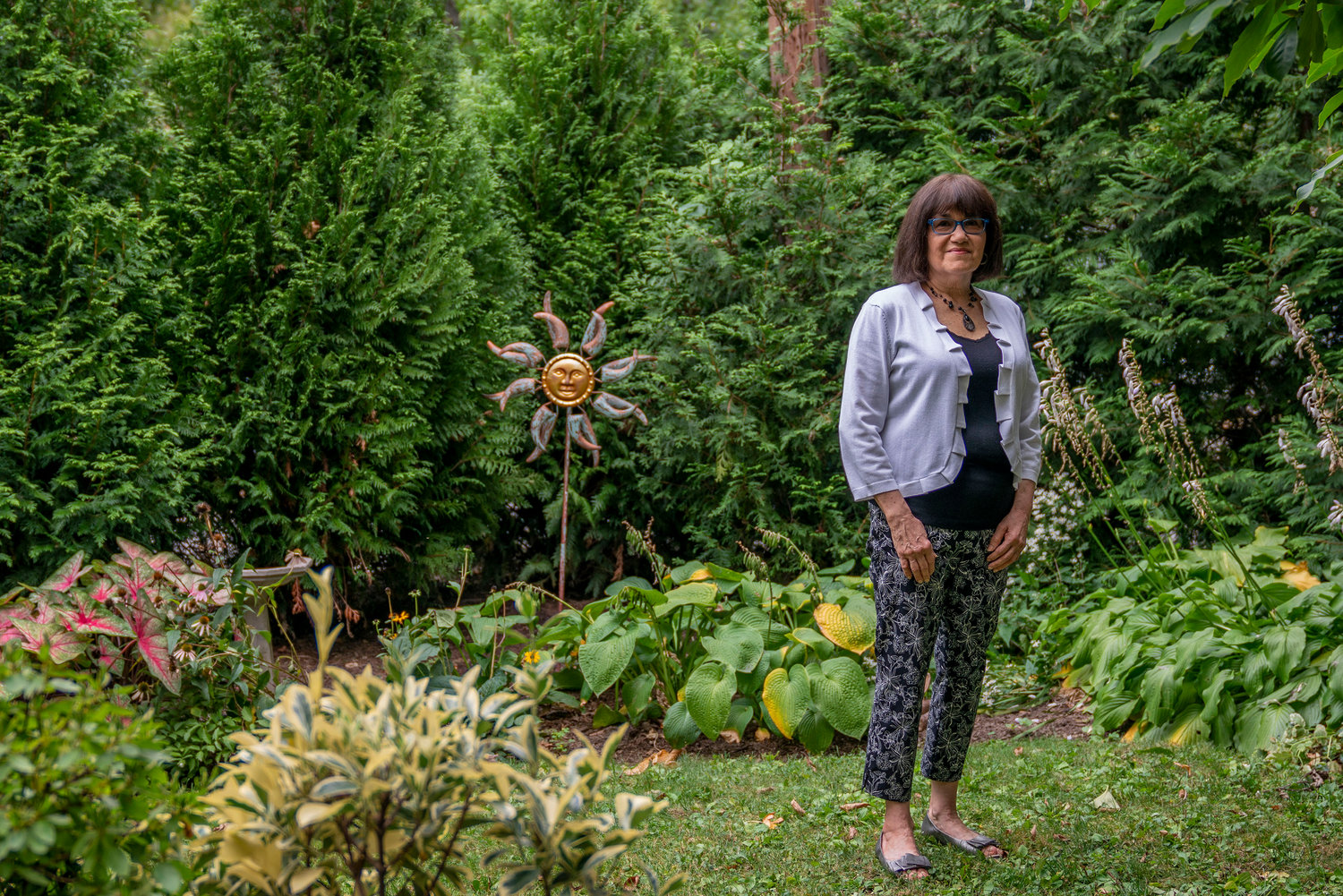 Laura Spalter has been on the board for more than 20 years and has been very vocal on a road diet. She asked the department of transportation a few times if she can see their plan on this project — they supposedly showed her a “plan” but it only a fib.
Hiram Alejandro Durán
Previous Next
By STACY DRIKS

The city’s transportation department has dredged up a six-year-old plan that would eliminate a travel lane on the very busy Riverdale Avenue between West 254th and West 263rd streets in the name of traffic safety.

Assemblyman Jeffrey Dinowitz and Councilman Eric Dinowitz blasted the DOT for its lack of transparency regarding the plan to make the road more narrow with the addition of a bicycle lane.

At the same time, there have been charges made by residents who believe members of the former North Riverdale Merchant Association and its current iteration — the Riverdale Main Streets Alliance — were privy to the DOT plans while the Community Board 8 was not.

Assemblyman Dinowitz is confident the alliance has seen the plan.

“People there have done good work. I’m not out to criticize them,” the Assemblyman said. “But I know they had it because they gave copies to various people.”

Dinowitz and his councilman son took to social media calling out DOT for what they said was the agency’s lack of transparency. They argued DOT had shown a short presentation to the community board to demonstrate what their plan was in the past. Now the department is giving the community the cold shoulder.

In the tweet, the Dinowitzes’ impression was that DOT engaged with a select organization — which they did not name — that favored the plan. At the same time, the civic organization is the cheerleader at the meeting.

The original 2016 plan had been proposed by the merchant group, which included former project chair member Christopher Rizzo.

A firm called VHB and the Association worked together on what they called the “Smart Growth Plan,” funded by the New York State Energy Research and Development Authority. Among others, they pitched for the additional bicycle lane.

The growth plan believed it was “undesirable” to have two travel lanes. They wanted a turning lane to replace the unwanted cars needing to turn left.

When the community board heard about the proposal, some members couldn’t believe that the transportation department had taken the alliance’s proposal seriously. The committee wanted to understand how DOT would create such a plan on their street that is the “main artery” of the area.

However, DOT denied the requests to show their plan to anyone, including CB8, which operates in an advisory capacity.

The DOT support system is said to be larger than others might think. However, despite leading the drive for the “road diet” on Riverdale Avenue in the past, Rizzo says he has not seen the new plan either. Although on March 21, the DOT — along with elected officials — received a letter from Rizzo.

“I understand that some community members do not believe these facts or, conversely, believe that Riverdale Avenue is singularly different from the hundreds of places nationwide where traffic calming and road diets have worked,” Rizzo wrote. “The burden of proof is on them, not the DOT to show them why,”

Rizzo, an attorney, claims the law requires DOT to implement traffic calming measures, and should as soon as possible. He cited facts where a “road diet” can reduce accidents by up to 15 percent.

“I want to be very clear — they (the alliance) did nothing wrong,” Councilman Dinowitz said. “This is about the Bronx DOT and their unwillingness to work with the local community board.”

When the news got out, some CB8 members were furious with DOT because, after repeated requests to prepare for the meeting, the department refused to share details with the board.

Eventually, Assemblyman Dinowitz met with DOT, hoping the department would finally share their plan. As of Tuesday, the city agency had yet to do so.

“They presented data yesterday, which I already knew,” the Assemblyman said. “Both in the (morning) and (afternoon) rush hours, the traffic coming southbound is probably close to double the traffic going northbound.”

In the past, the DOT created a two-directional travel lane with a bicycle lane, and there have been rare sightings of bikers nearby. The same could happen on Riverdale Avenue under what is believed to be in DOT’s proposal because it’s not a bike-friendly area.

“The idea is you really got to start someplace,” Travis said. “Bike lanes are always controversial. What I think over time is that there is no negative impact for bike lanes.”

Cyclists feel safer riding their bikes when there’s a lane in their midst, Travis added. However, many others think the feeling of safety is defined differently.

“Nobody wants to shop, dine, walk, park or stroll along a street that feels unsafe or unkept,” Rizzo wrote in his letter

So far there, only conjecture about the plan exists. Including from CB8 chair Laura Spalter.

“It’s a bike lane to nowhere,” she said.

A DOT spokesperson said the agency is “encouraged by the elected officials’ enthusiasm to review our proposal to improve safety along Riverdale Avenue.”

The Rev. Brian McCarthy of St. Margaret of Cortona-St. Gabriel Church opposes the bike lane, telling The Riverdale Press that the bike lane would be a hazard to drivers who want to use their parking lot. It is an accident waiting to happen.

The church isn’t the only parking lot to worry about. The apartment buildings that offer garage parking and a handful of other lots on Riverdale Avenue will have to take more caution than they would generally have to.

“I do have concerns,” P.S. 81 principal Anne Kirrane said, admitting there is already enough traffic build-up during that time.

The principal is unaware, however, of how bike lanes operate in front of the schools. Still, Kirrane says she’s not looking forward to finding out.

Assemblyman Dinowitz is angry because DOT has heard neighbors fear changing the streets could make them more the community expressing immense evidence that the roads would be dangerous, and the DOT rebuffed that idea.

He also claims the only thing he can think of them adding paint to the ground is financial reasons. The amount of money needed to create a turning signal might be scientifically different than painting the ground.

The Assemblyman says he has tried multiple times to implement traffic changes in only turning lanes with a turning signal so the northbound traffic can clear before the light turns green.

“I do have a concern that when you reduce two lanes into one lane,” Dinowitz said, “you cause traffic.”