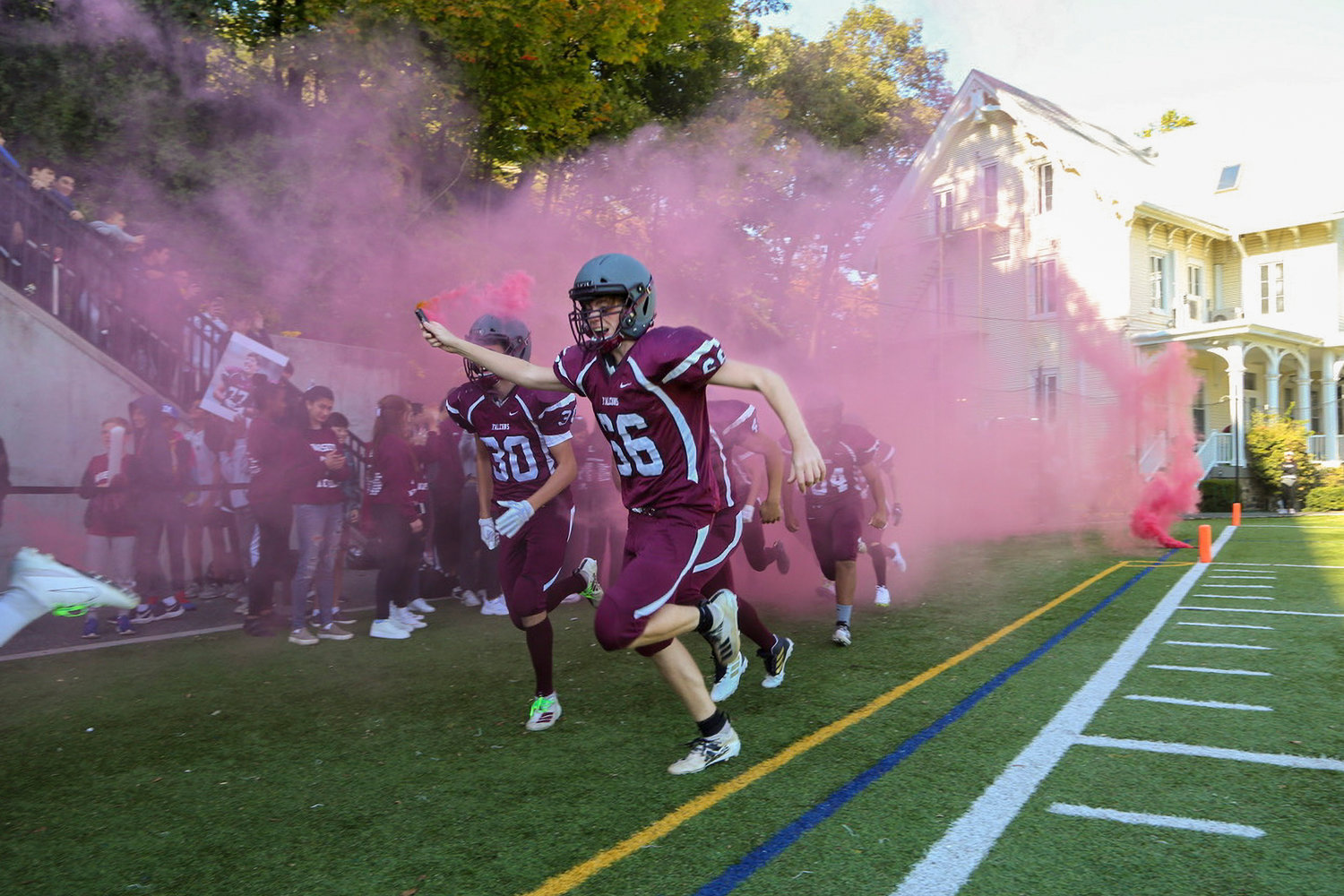 At 170 pounds, Grant Schwartz isn’t exactly a giant when it comes to being a lineman for Riverdale Country School’s football team. But when it comes to giving back to causes he cares about, Schwartz’s heart is giant — which likely explains why he was recently one of nearly a dozen high school football players in the tri-state area recognized for having the heart of a champion,
Courtesy of Grant Schwartz
By PETE JANNY

Saying someone has the heart of a champion is not a compliment that should be taken lightly. After all, not everyone is worthy of such an effusive description.

One Riverdale Country School football player has taken the meaning of that metaphor to a new level after being honored for his example both on and off the field.

Grant Schwartz isn’t your typical high school athlete. His interests go beyond simply competing on the gridiron. One might find him launching a business venture or some philanthropic cause. He also finds himself on Riverdale’s lacrosse team in the spring.

Yet, it’s not the touchdowns he scores or the assists he makes that’s leaving a mark. Instead, it’s Schwartz’s sportsmanship and consistent work ethic. And it’s that very reason he was recently nominated for USA Football’s Heart of a Giant Award — a weekly series where high school football coaches nominate players who best exemplify qualities of “commitment, teamwork, will, character, and dedication.”

Each week, fans go online and vote for one of 10 players who attend tri-state schools in New York, New Jersey and Connecticut. Schwartz was part of Week 4 voting that gave him a chance to earn a $1,000 grant for his school. From there, one finalist is chosen based on video submissions to get an additional $4,000, and a trophy.

“I always loved playing football, but I never thought I was an award-winning football player,” Schwartz said.

Schwartz has a middle school teacher to thank for encouraging him to take on a contact sport in the first place.

“One day he told me I should come out to play for the team and he was very insistent,” Schwartz said. Back then, he was reluctant to play sports. But this teacher was the right motivator.

The teacher’s vote of confidence was the first step toward Schwartz becoming the player he is today — a 170-pound lineman and Riverdale captain. He can’t help but chuckle at his undersized stature compared to other linemen — a light-hearted quality he possesses as a team leader.

“It’s been a fun and interesting challenge because it’s about finding a balance between being relatable and understanding, but also pushing kids to get the most out of them,” Schwartz said. “At the end of the day, we are a football team, and I want to help everyone get better. Finding that balance has been the most challenging, and also rewarding, part.”

Being a lineman requires a firm grasp of the fundamentals, and much less attention paid to any football stereotypes about size or positional fit. Schwartz is used to drowning those narratives out by now.

“I’m 170 pounds, but I play center and defensive end as well,” Schwartz said. “I think it’s tough, but it forces me to focus more on technique and gaining leverage as opposed to using brute strength.”

The layoff from football and normal life in general throughout 2020 gave birth to another experiment for Schwartz. This endeavor included enlisting the help of a friend to launch the first-ever fantasy lacrosse platform called Flow Fantasy — a creation combining Schwartz’s love of coding, lacrosse and philanthropy.

“I think football taught me that because you come out to the field every day and no matter how you’re feeling you have to put in the work to get the results,” he said. “I think that is a perfect corollary for working on a technology project.“

All proceeds earned from sign-ups are sent to the Native American Education Fund to honor the origins of the sport.

“Lacrosse was created by Native American people,” Schwartz said, “but it’s seen today as a white affluent sport played by people like myself.”

He’s involved in other pursuits too, including organizing a student-run hackathon and being recognized multiple times at the Riverdale Film Festival for his off-kilter comedic works. For Schwartz, these are simply more ways to have fun — which, in turn, fuels the heart of a champion.

While Schwartz and his teammates may be in the waning days of their football careers, that doesn’t take anything away from the goals of wanting to win and grow closer together in the process. It all goes back to the name of the team’s online group chat, “Football is Family.”

“We all know that we’re not going to play college football or professional football,” said Schwartz, who intends to focus more on history or economics in college. “I always think about why I play football. I do it for the brotherhood and for the family. Without a full and complete effort from everyone on the field, you’re not getting anywhere.”

“That’s why, especially in football, family is everything,” Schwartz said.

The voting period for the Heart of a Giant Award already ended, so now  Schwartz can sit back and enjoy the rest of the ride, like finishing off the football season and coming closer to finally making a college decision.

Schwartz has given football everything he has, and one thing is for sure — no one can take that away from him.

Wolverines get ‘physical’ in playoff win over Jefferson