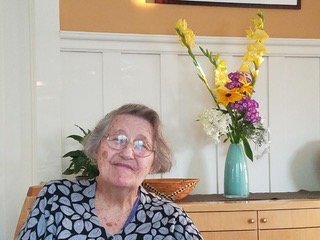 Doris Angele Durand Redmond was a lifelong resident of Riverdale, passing away on Jan. 2, 2022. She was 92.

She had great interest in the arts, including fine arts, architecture, and theatre. She was a lifelong learner and avid reader, enjoying international travel with her sister, Odette Anderson. She spent many volunteer hours at St. Gabriel Church, including 25 years as the school librarian. She thoroughly enjoyed picking out books and encouraging children to read.

When her mother was a resident of Schervier Nursing Home, she volunteered there for 10 years.

She attended countless basketball and ice hockey games, and served as a den mother and Girl Scout leader. She was a chaperone on many school trips.

She also enjoyed giving out-of-town visitors grand tours of New York City. The Metropolitan Museum of Art was a favorite destination. She also loved going to the ocean and spending time upstate with her son, Charles.

She nurtured deep friendships, and with a close circle of friends, studied spirituality and the human condition. She was a kind and generous friend.

She was a loving daughter, sister to Odette, mother, grandmother to Michael Pontillo (Jen), and great-grandmother to Ashley, Emily, Lindsey and Kayleigh. She also was a beloved aunt to cousins across the country.

She abided in love throughout her life, and spent the last four years in Portland, Oregon, with her daughter Nanette (Joe).

She brought a loving presence to all she met. She will be greatly missed.

She was preceded in death by her husband Charles, daughter Patricia, and son John.

A funeral Mass will be held at St. Gabriel Church on Thursday, March 10 at 10 a.m.