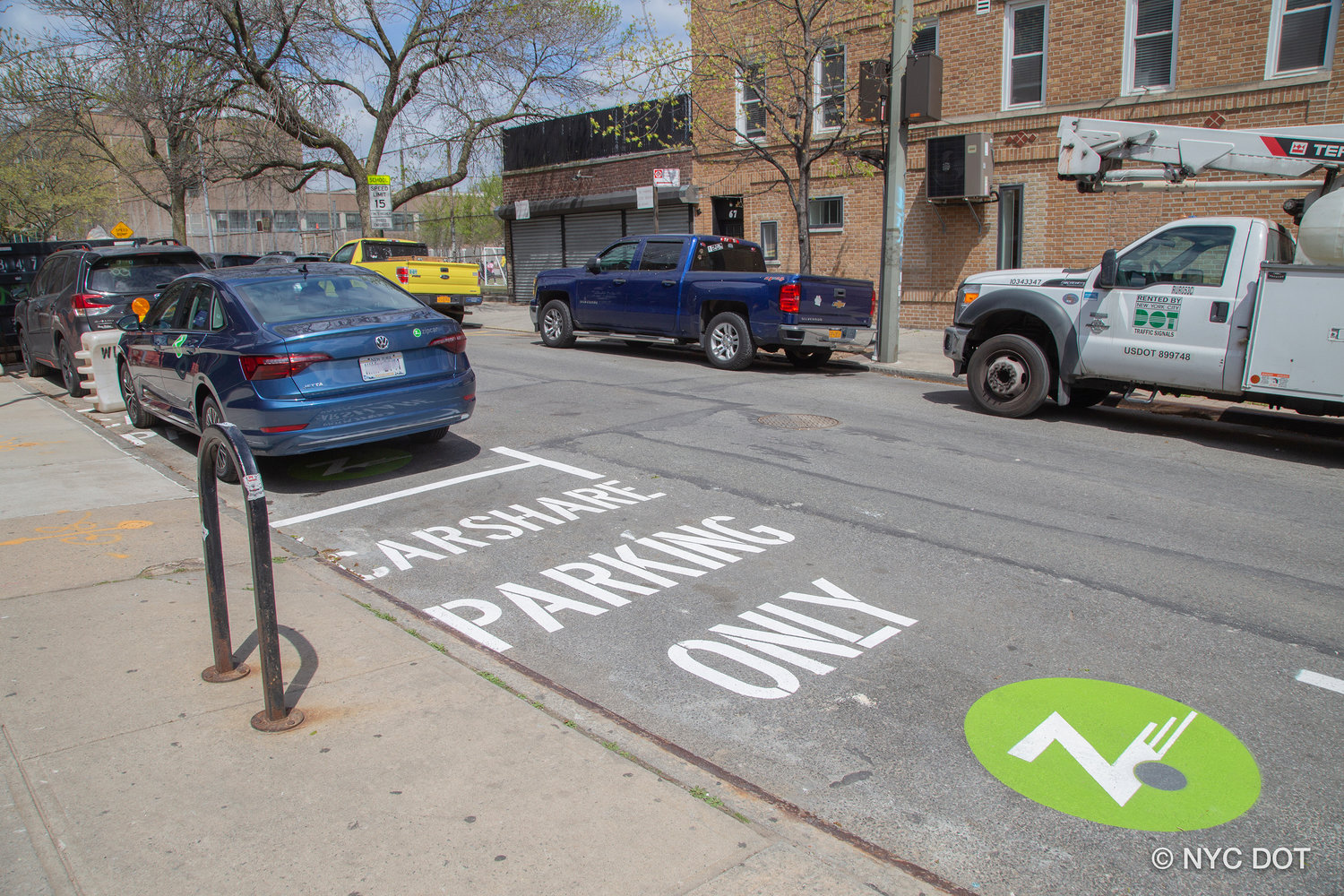 Sometime next year, Zipcar will join three sites in the northwest Bronx in partnership with the city’s transportation department. Within each site, two parking spaces will be used, and the DOT will charge the company an annual fee of $475 per permit. The car-sharing company can charge as low as $11 per hour or $83 per day on select models.
Courtesy of New York City Department of Transportation
By Stacy Driks

Hal Dorfman says he loves Riverdale but won’t hesitate to use his feet to walk out of it if car-sharing services are allowed to take up valuable parking spaces.

During a community board meeting on Nov. 17 Dorfman expressed his opposition to the idea of allowing popular growing carsharing programs to gobble up two parking spaces up on Arlington Avenue.

Yet, he is not the only one. Many community board members and chairs at that meeting shared a similar opinion. Officially, the CB8 voted against the plan. But it is too late as permits have already been granted to the companies.

“I love this city, I was born here, and I intend to die here, I don’t want to give my spots to people, period,” Dorfman said.

Car-sharing provides on-demand short-term access to a shared fleet of vehicles through a membership for an hourly or annual fee. It began as a two year-pilot program with the city Department of Transportation that was launched in 2018.

Throughout the pilot, the DOT partnered with the University of California Berkeley and conducted three customer surveys.

Stevie Feig, the transportation department city planner, said the university found that for every one shared vehicle, four personal vehicles were either not purchased or sold. The point is the such services state they are good for the environment.

However, these surveys were conducted by the applicants, not independent entities. Some CB8 committee chairs were not impressed by the data and surveys show.

The partnership aims to help residents gain fast and easy access to their fleet of vehicles while reducing the number of cars on the street and decreasing greenhouse emissions.

“The agency tells you they are hoping that people give up cars. I hope to will the lottery, but I never succeed,” said land use committee chair Charles Moerdler.

Getaround spokesperson Adrienne Moretz said the company tried to aim for locations near public transportation and bike lanes while meeting the city’s transportation department criteria, which she called rigorous.

She said that means the spots needed to be on a permanent parking lane with alternate side of the street parking, which the companies are responsible for cleaning. Other criteria did not allow the site to be located 250 feet from a house of worship, schools, firehouses, and police stations.

Initially, the agency provided nine locations to the community board, explaining these are the locations that would be participating.

However, to everyone’s surprise — the agency cut it down to four. Those locations are 4652 Manhattan College Parkway, 3536 Cambridge Ave., 3600 Irwin Ave.and 2785 Arlington Ave.

Stephanie Coggins of Riverdale was relieved that Independence Avenue was taken off the list.

Feig said the original list was outdated as it came from data through its pilot program two years ago.

The companies are giving the city $475 as an annual fee per permit to keep their permanent parking space that can be renewed the following year or new sites, which would be about $40 per month.

Glenwood Parking Services on 630 W. 246th St. charges a monthly fee of $225. While according to IPark, Century Parking charges $31 per day.

David Gellman, CB8 budget committee chair, doesn’t have a dog in this fight as he has his own garage. However, he wonders if public garages thought the payment was not worth it.

While there are many garages in the northwest Bronx, Councilman Eric Dinowitz doesn’t believe there was enough outreach from thecompanies.

“I know the outreach is just an email, a voice mail, or a text that wasn’t responded to,” Dinowitz said.

The councilman argued explaining more could have been done.

Zipcar has an equity and outreach plan focusing on affordable vehicle access. During the transportation department pilot program, they partnered with NYCHA locations to place their vehicles nearby.

Moerdler said the program could possibly do permanent damage to building affordable housing in the community.

“If you have an area where you want to build affordable housing that sits within the category of people who make $50,000 or less, not $185,000 a year. We have to have parking for people who live in those houses or facilities,” Moerdler said.

As the city’s transportation department is retrieving payment, they expect the companies to clean their permit site, including 15 feet before and after, for alternate side of the street parking.

Getaround chose Cambridge Avenue because it is one block from a bus stop and half a mile from the train station, which can be a 15-minute walk.