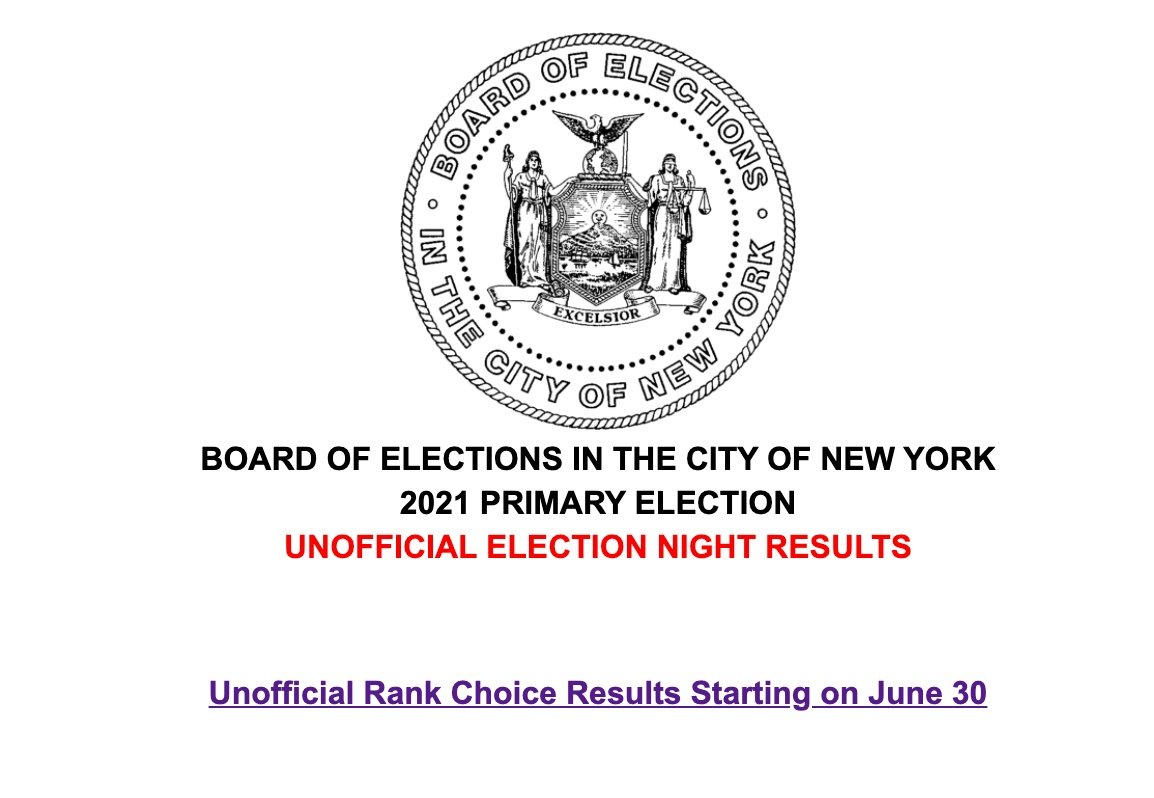 The city's elections board is expected to release preliminary ranked-choice counting results later in the day Wednesday, after a mishap with tens of thousands of test ballots caused the agency to release erroneous results Tuesday evening.

Although absentee ballots can not yet be counted, elections officials tabulated ranked choice results for a number of citywide races on Tuesday, including the mayoral and city comptroller race.

Brooklyn borough president Eric Adams maintained his lead for the Democratic nomination to succeed Mayor Bill de Blasio after 11 rounds, but had a small lead over Kathyrn Garcia. On the comptroller side, Brooklyn councilman Brad Lander led Democrats in that race, but also saw his lead narrow by council Speaker Corey Johnson.

But by late Tuesday evening, the elections board removed those results online, and later announced on social media it would have to retabulate the votes. That's because some 135,000 test images left over from pre-election preparations were still in the system and were included among the counts. It's not clear if those votes favored any particular candidate, or how much it skewed results.

"Board staff has removed all test ballot images from the system, and will upload election night results, cross-referencing against election night reporting software for verification," the elections board told its social media followers.

Some of the candidates used that same platform to speak out about the counting mishap.

"The Board of Elections' release of incorrect ranked-choice votes is deeply troubling, and requires a much more transparent and complete explanation," the Garcia campaign released on social media. "Every ranked-choice and absentee vote must be counted accurately so that all New Yorkers have faith in our democracy and our government."

Maya Wiley, who had been eliminated in the penultimate round of counting leaving just Garcia and Adams before finding out the results were flawed, called for more transparency in the counting process.

"This error by the Board of Elections is not jsut failure to count votes properly today, it is the result of generations of failures that have gone unaddressed," Wiley said, in a statement. "Sadly, it is impossible to be surprised. Last summer, BOE mishandled tens of thousands of mail-in ballots during the June 2020 primary. It has also been prone to complaints of patronage.

"Today we have once again seen the mismanagement that has resulted in a lack of confidence in results, not because there is a flaw in our election laws, but because those who implement it have failed too many times."

In his own statement, Adams acknowledged the reporting error, but encouraged voters not to get discouraged with the election process.

"Today's mistake by the Board of Elections was unfortunate," Adams said. "It is critical that New Yorkers are confident in their electoral system, especially as we rank votes in a citywide election for the first time."

Even when the elections board releases the revised results, they won't be finalized for at least another week — or two — while absentee ballots are collected and counted.

Wednesday's counts could also give preliminary ranked-choice counts in the city council races too, including the one in the district currently represented by Eric Dinowitz. He leads after preliminary counts, and short of a miracle from the Mino Lora campaign should win re-election.