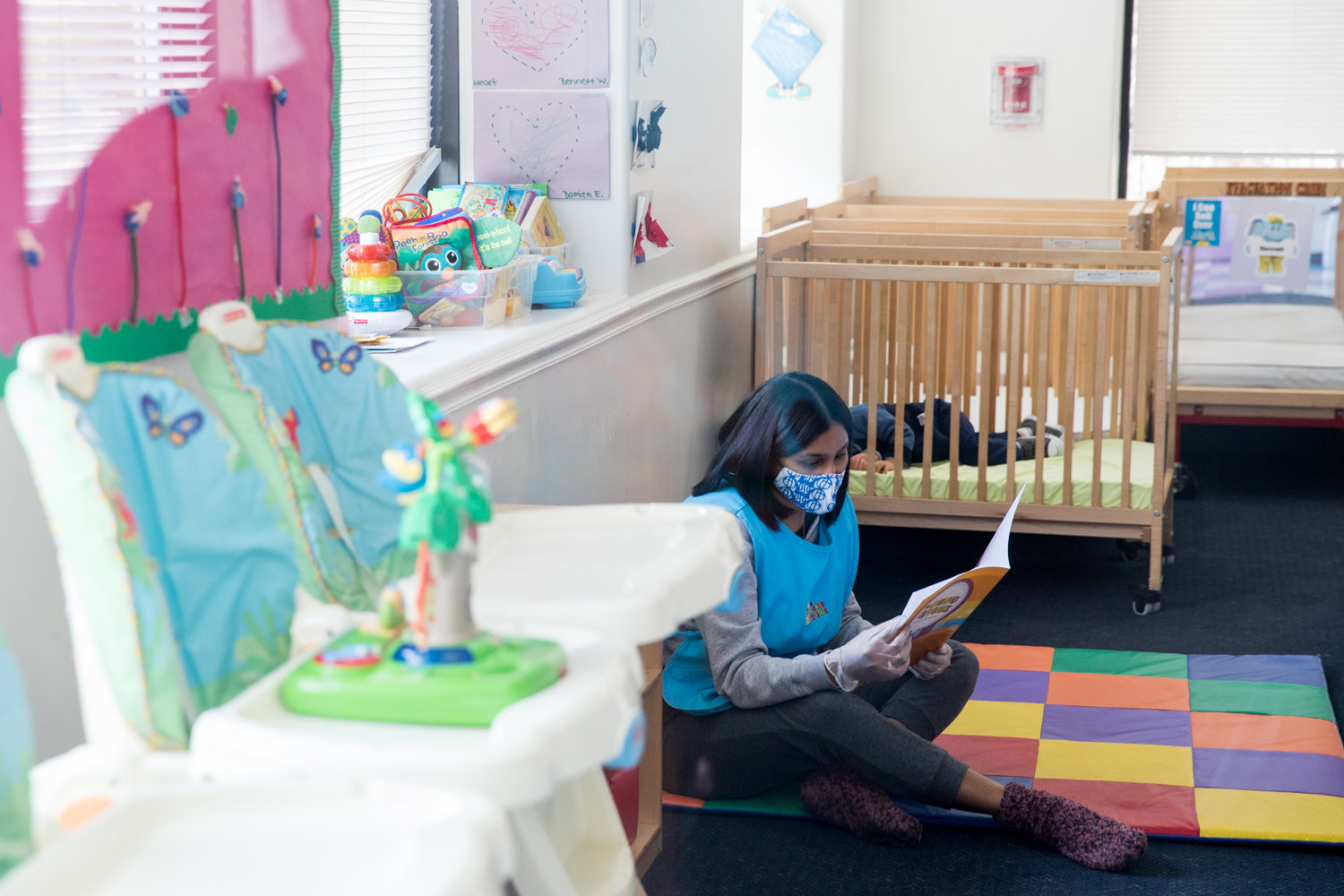 Lipsy Garcia, a teacher at The Learning Experience, looks through a book while children take a nap. The early childhood education center has retooled its services to provide day care for the children of essential workers during the coronavirus pandemic.
JULIUS CONSTANTINE MOTAL 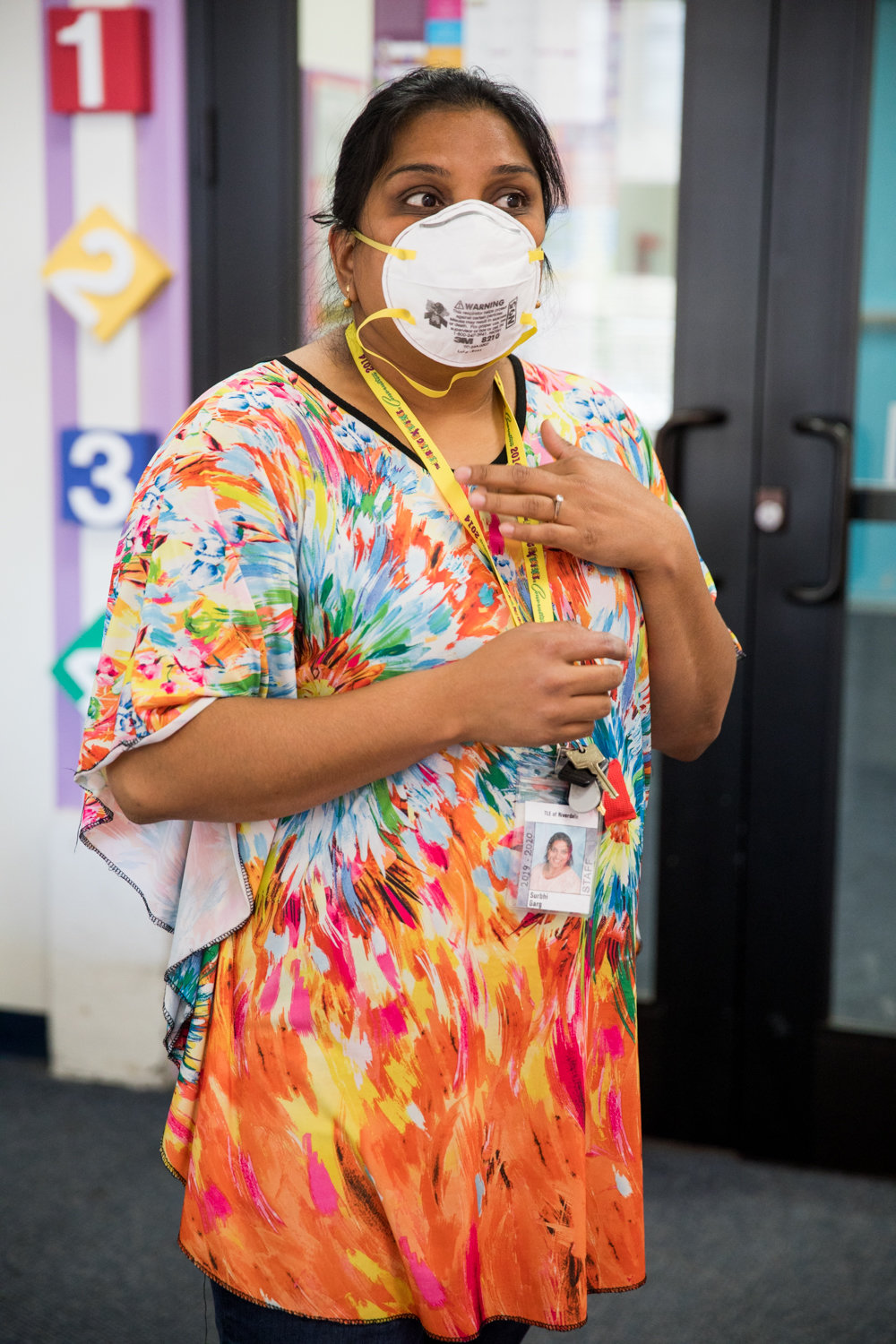 Surbhi Garg, director of The Learning Experience, talks about the changes the center has made to provide day care to the children of essential workers during the coronavirus pandemic.
JULIUS CONSTANTINE MOTAL 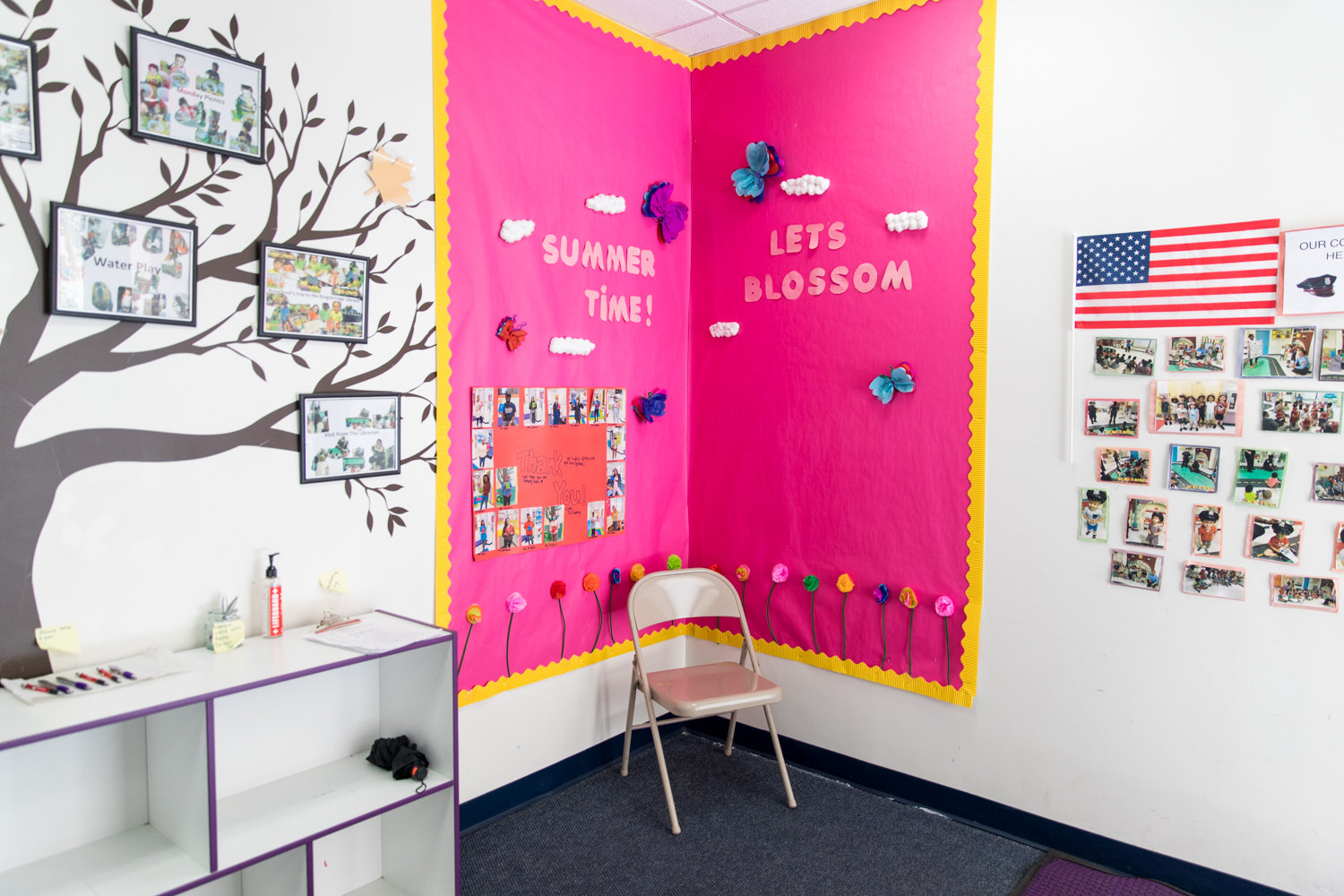 When essential workers drop off their children at The Learning Experience, they are told to sit in the chair while a nurse checks in a child. The early childhood education center is providing day care to the children of essential workers during the coronavirus pandemic.
JULIUS CONSTANTINE MOTAL 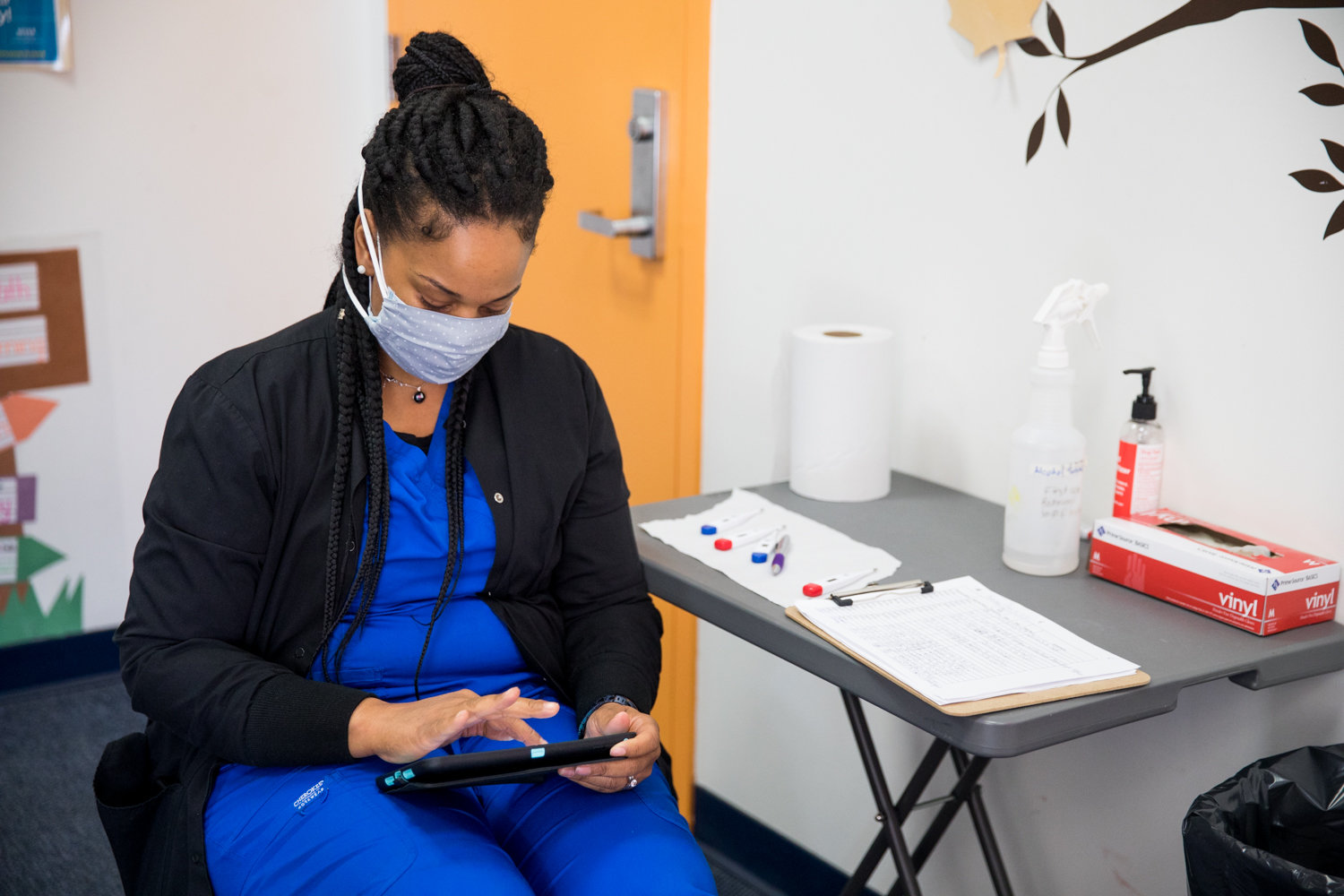 Monarae Speller, a registered nurse, is responsible for checking in the children of essential workers at The Learning Experience.
JULIUS CONSTANTINE MOTAL

A wall of photographs honors community heroes inside the entrance of The Learning Experience, which is providing day care to the children of essential workers.
JULIUS CONSTANTINE MOTAL 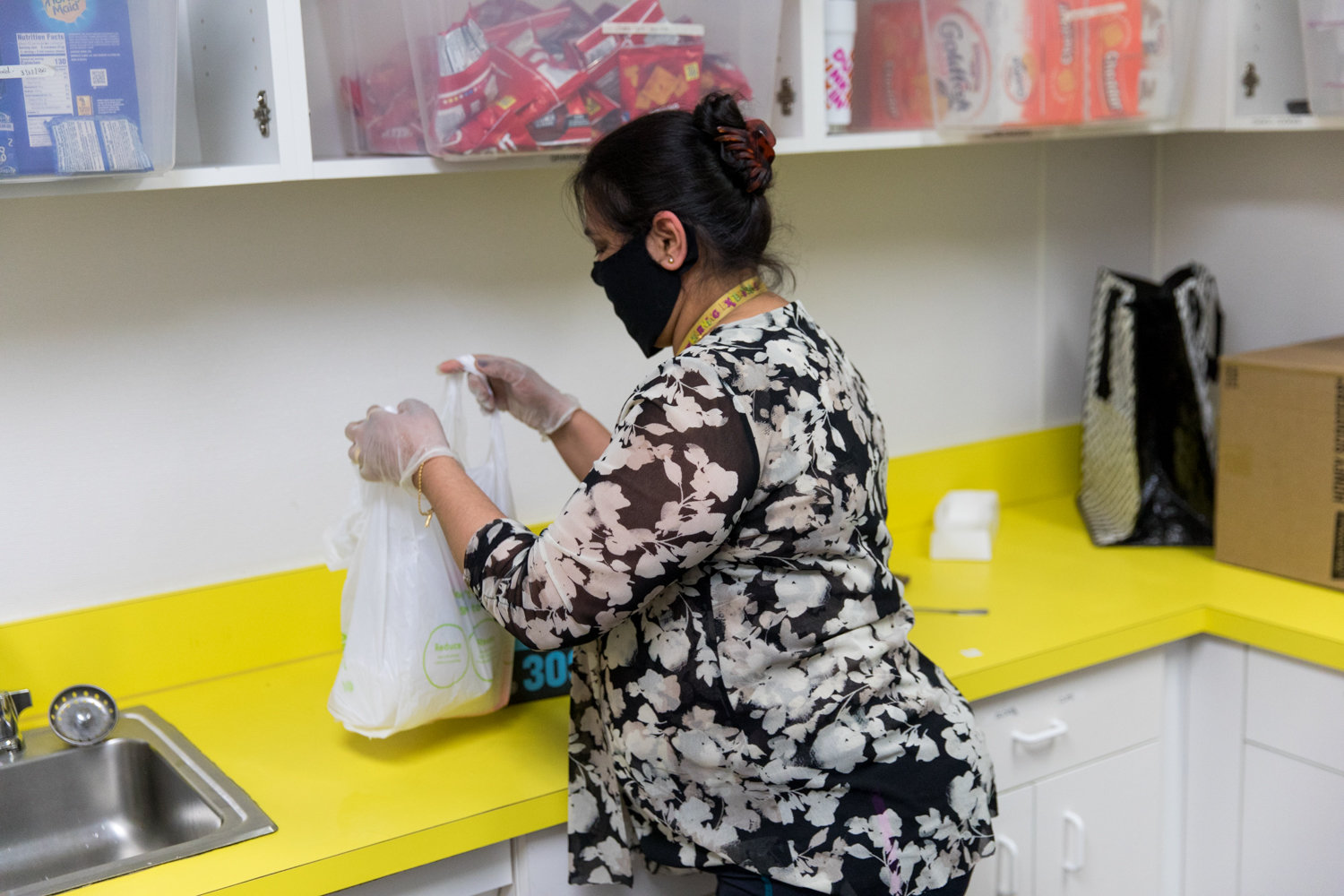 Danshara Kansara cleans up inside the kitchen of The Learning Experience, which is providing day care to the children of essential workers.
JULIUS CONSTANTINE MOTAL 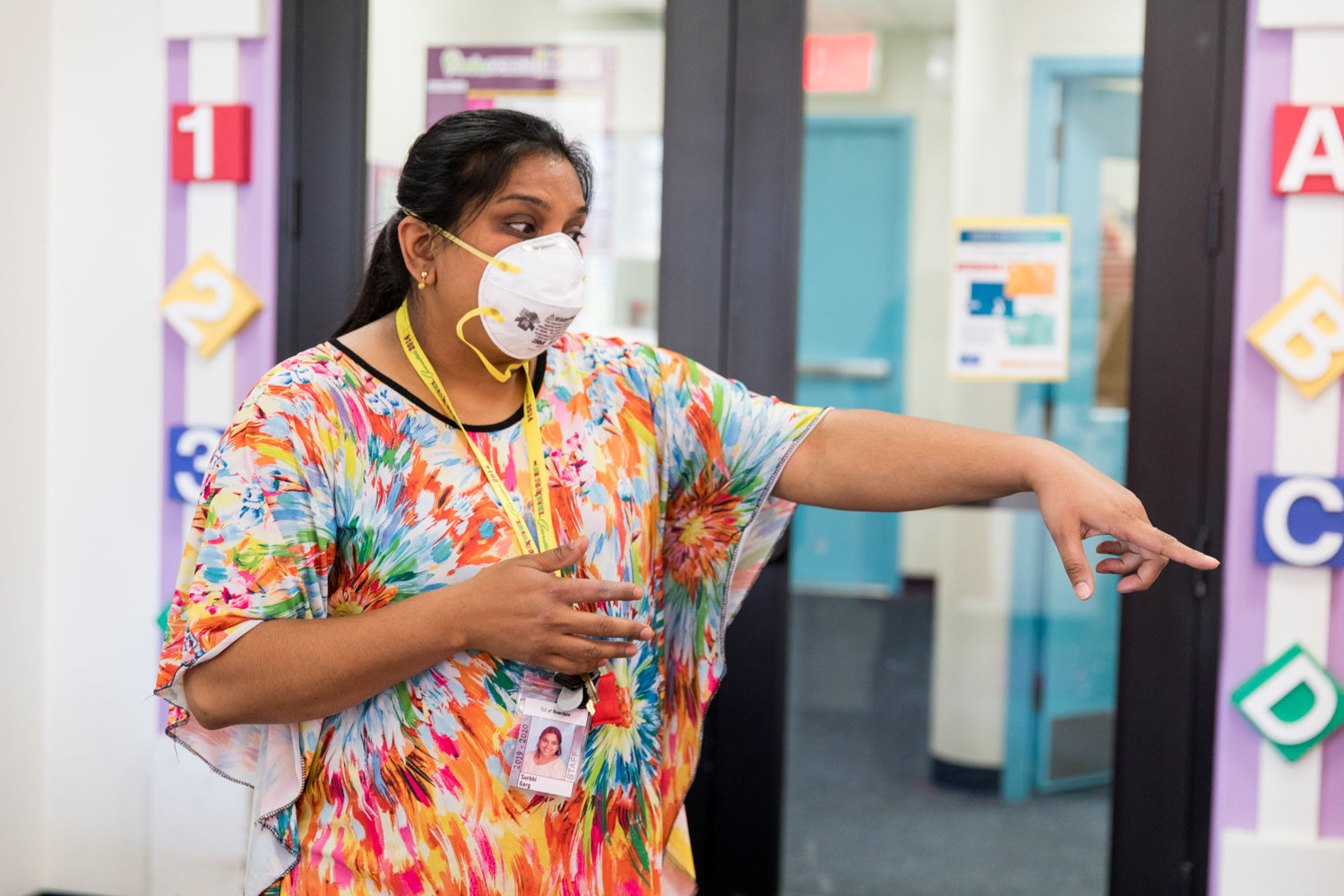 The Learning Experience director Surbhi Garg has guided her team through a transformation since the advent of the coronavirus pandemic. The facility has gone from serving 110 children to just 18 as it is now providing day care only to the children of essential workers.
JULIUS CONSTANTINE MOTAL
Previous Next
By KIRSTYN BRENDLEN

A regular day for one of the dozens of children who attend The Learning Experience would begin when they’re dropped off at the door to their classroom. It ends when they’re picked up in that same doorway by a familiar face.

Since the beginning of March, though, things inside the early childhood education center have looked a lot different. As the city has reacted to the coronavirus pandemic, only about 18 children — from young babies to 5-year-olds — are coming each day.

All of them are children of essential workers. Their parents can only take them as far as the vestibule of the building, and about 20 of the 35 staff members are still at work.

Surbhi Garg, the owner of the center at 3210 Riverdale Ave., said the last “normal” day she remembers is March 13, the day her 9-year-old son’s school closed. That was when she was hearing news of more COVID-19 cases in the city, and when some businesses started to slash their workforces.

“I know how many families of ours are doctors and nurses,” she said. “And NYPD personnel and FDNY personnel. It started with the fact that I know those people are the first-in-line defense people. It started the conversation that we can’t just shut our doors.”

Garg decided to stay open for those parents who wouldn’t have anywhere else for their children to stay. Within a few weeks, she was working with the city’s education department to become a regional enrichment center, where essential workers like those from the New York Police Department, the New York Fire Department, and the Metropolitan Transportation Authority, among others, could ensure their children are fed and cared for while they are off to keep the city running.

“These people have to be out there doing what they are supposed to be doing, especially given these circumstances,” Garg said. “That kind of was the constant voice in my head, and in my staff’s head, that if we are healthy and if we are able to, let’s not just now shutter down because we are scared.”

Amy Dennis, a speech therapist from Manhattan, has worked from home, providing video chats and support for the students she can’t see in public. Doing that work with her two young children at home, she added, would be impossible.

“I can’t imagine if I had to do all this remote learning here with these two little children,” Dennis said. “I’m very grateful that they’re continuing to be able to take care of our children, and it’s a safe place.”

The Learning Experience provides Universal Pre-K, and because of that, Garg already has a relationship with the city’s education department. When Garg received a survey from the department asking what care facilities were willing to remain open as emergency care centers, Garg knew she could stay open to take care of the children.

Joshua Hernandez and his wife both work for the MTA, and have kept reporting for work as the city closes down. They weren’t sure who would take care of their 4-year-old — that is until they got an email from Garg.

Still working is “worrisome,” Hernandez said. “But at the same time you feel good about it. We move New York. But it’s been hard. It’s definitely been hard.”

Hernandez’s mother-in-law could have watched his son, but she falls into a high-risk category of someone whose life could be threatened by the coronavirus. Hernandez was grateful his son was able to continue his education in familiar surroundings.

While Garg has been happy to stay open, circumstances certainly wear on her and her employees.

With smaller class sizes, teachers have been a little more creative with their lessons, doing more playtime, and reading more stories to their classes.

Ningxin Wan, a cardiologist at Montefiore Medical Center, has worked 12-hour shifts, filling in wherever doctors are needed. She’s also the mother to a 15-month-old daughter. When she found out The Learning Experience would transition from their normal operations, she was a little bit panicked.

Wan already was planning to move into an empty apartment to keep her husband and daughter safe in case she was carrying the coronavirus that causes COVID-19 — and taking care of a toddler during the day while working at the hospital at night was taking a toll.

“You’re sure you want me to take care of my baby during the daytime, and then at night, take care of patients?” Wan said. “It’s not possible. It’s impossible.”

Wan secured a spot for her daughter through the education department just before she moved out of the family apartment.

Garb said she and her staff members have felt the love from parents. One, in a gesture of thanks, dropped off a box of lollipops at the center recently.

“It’s been, in 20 years, the first time I looked at a lollipop and went, ‘This is good,’” Garb said. “And we laughed, and we cheered, and some of us cried. It’s a very small gesture, but it spoke so much that we were all kids for a moment, and we ate lollipops for our children.”