Encouragement from a new pen pal 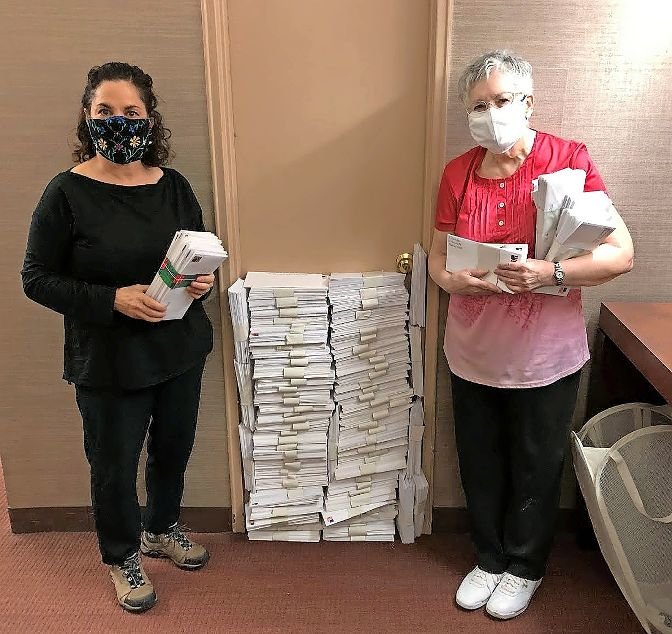 Miriam Levine Helbok wrote her first letter convincing a total stranger to get out and vote on Sept. 21, 2019. A year later, she’s followed that up with nearly 5,000 more.

Helbok sent out more than 2,700 of the letters last week encouraging voters from all over the country to visit their polling place Nov. 3, part of a project from the political grassroots group Vote Forward.

“I take pleasure in writing as neatly as I can, so that the recipient of each Vote Forward letter can see — assuming he or she notices — that I have taken pains, especially when I write his or her name in the salutation,” Helbok recently told The Riverdale Press in yet another letter. “After the printed ‘sincerely,’ I write, ‘With best wishes and hope for our future,’ and I sign my name with a flourish.”

At the bottom of each letter, Helbok shares words from author and environmentalist Edward Abbey, saying that “the best cure for the ills of democracy is more democracy.” On the flap of each envelope, Helbok adds “We the people of the United States,” to remind those receiving these letters the opening words of the U.S. Constitution.

Helbok took on the task thanks to Kathryn Solomon, a physician who is part of another political group, Swing Left. She printed out the initial form letters, which included space for individual authors like Levine Helbok to handwrite why voting was so important to them.

“The reason, I explain, is that ‘in nearly every (election), if all the people who did not vote had actually voted, the results might have been very different,’” Helbok said. “’That is why every person’s vote truly counts. Your vote represents your voice, which deserves to be heard.’

“I get pleasure in knowing that none of these strangers have the faintest idea about who I am. Who among them would imagine a 76-year-old white-haired woman sitting, often buck naked, in a high-rise in the northwest Bronx, with a view from her window all the way to the two bridges that connect my borough with the borough of Queens? They can’t know that my little cat, Annie, sometimes sits on the loveseat net to me, or on my chair nestled against my back, hoping for a massage of her belly, or a scratch on her back near her tail.”

She wrote the letters, sometimes accompanied by the voices of newscasters like Judy Woodruff, Amy Goodman and Jake Tapper, or historians like Ron Chernow or Doris Kearns.

Helbok also will listen to music, many times Antonín Dvorák’s Symphony No. 9, usually played by the Gimnazija Kranj Symphony Orchestra of Slovenia during a Christmas 2018 performance.

“The audience’s standing ovation when it ended, which continued for many minutes, somehow echoes my fierce hope that voters will cast their ballots in the 2020 presidential election in record numbers,” she said, “and usher in a better future for everyone, everywhere.”

Eating outside will continue for a while

If restaurants can find a way to keep diners warm as winter comes, they’ll be allowed to continue outdoor dining — at least through next September.

The city council recently passed Intro 2127-A — a bill that awaits Mayor Bill de Blasio’s signature — that would keep outdoor dining in place the way it is until a more permanent program can be implemented.

If passed, restaurants also would be allowed to use portable propane heaters to keep everyone warm, as long as they follow fire department regulations.

“New York City’s outdoor dining program has been a remarkable success,” said Councilman Antonio Reynoso from Brooklyn’s Williamsburg area, in a release. “This is a huge win for the restaurant industry and its workers, diners, and the morale of residents.”