Engel to hot mic: Talking about Bronx violence because he's in a primary 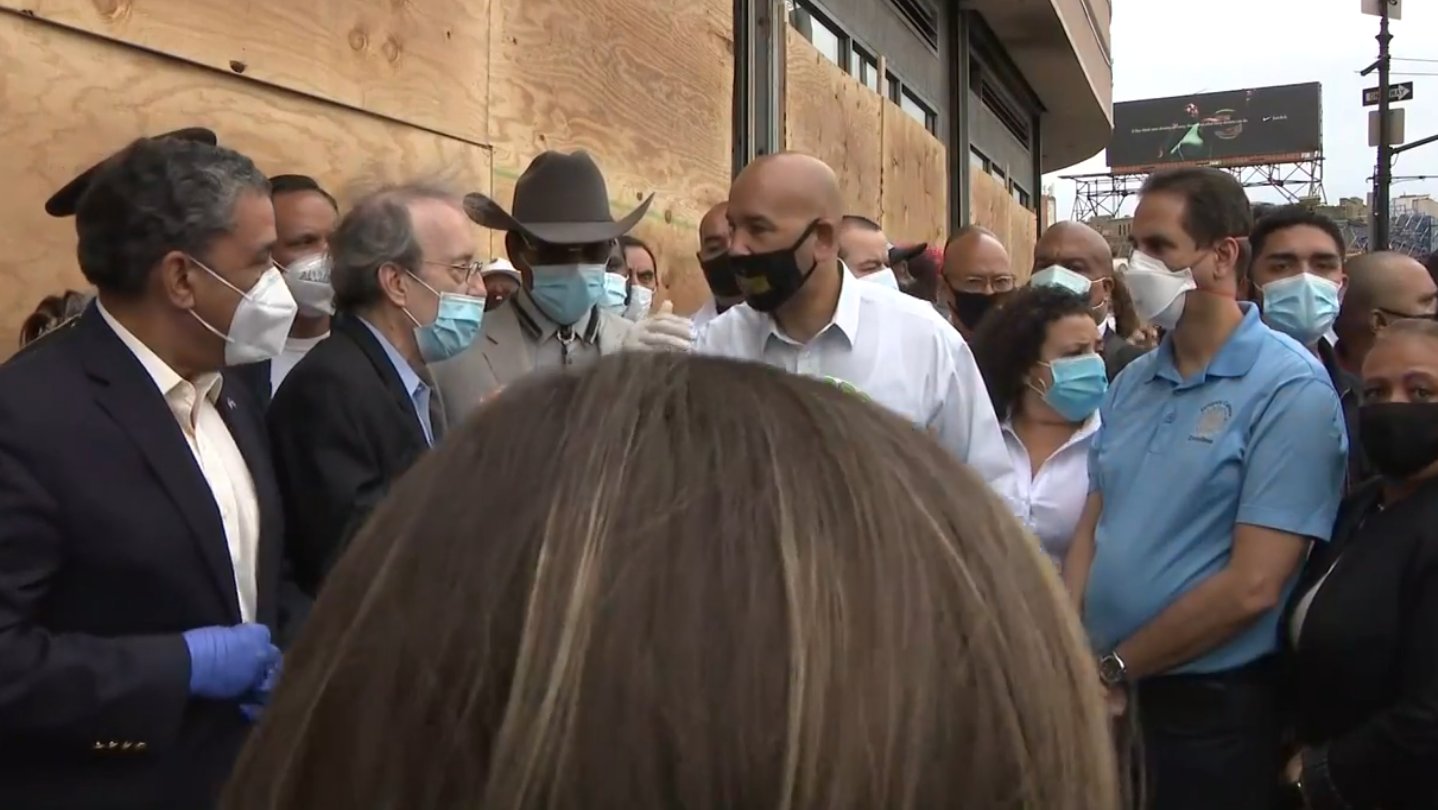 U.S. Rep. Eliot Engel talks to Bronx borough president Ruben Diaz Jr., ahead of a press conference on Fordham Road addressing riots and other violence in that area the night before. This live feed from the Bronx 12 television news station, included a hot mic conversation of Engel asking Diaz for a chance to speak.
Courtesy of Bronx 12
By KIRSTYN BRENDLEN

U.S. Rep. Eliot Engel has returned to the Bronx after weeks of his self-imposed exile to Washington, D.C., but apparently told Bronx borough president Ruben Diaz Jr., he's concerned because he's in the middle of what's probably the most difficult primary he's ever faced as a congressman, in a private exchange caught on camera..

Engel was touring Fordham Road with Diaz, Assembly Speaker Carl Heastie and Bronx district attorney Darcel Clark Tuesday afternoon, prepping for a news conference about the riots and violence that occurred there the night before, when a hot mic maintained by television station Bronx 12 apparently caught an exchange between Engel and Diaz, and what seemed to be Engel asking for a chance to speak.

The exchange was first reported by NY1's Emily Ngo, who quoted Engel twice saying "If I didn't have a primary, I wouldn't care."

Engel is facing school administrator Jamaal Bowman — who has received backing similar to that of a previous Bronx congressional underdog, Alexandria Ocasio-Cortez  — along with Sammy Ravelo and Chris Fink. Bronx 12 was streaming the chatter ahead of the news conference on its Facebook page, which apparently included Diaz assigning a speaking order for the political leaders who had joined him. At one point, Diaz seems to suggest somebody from the community speak, and then "a young person."

"I can't have all the electeds talk, because we would never get out of here," Diaz said, as picked up by his hot mic. "Please bear with me. I'll announce everyone. I appreciate you coming."

Engel ultimately did not speak at the press conference.

The congressman — who also is chair of the powerful House Foreign Affairs Committee — told The Riverdale Press in a statement that "in the context of running for re-election, I thought it was important for people to know where I stand. That's why I asked to speak. Of course I care deeply about what's happening in this country. That's what I wanted to convey. I love the Bronx, grew up in the Bronx, and lived here all my life. I would not have tried to impose on the borough president if I didn't think it was important."

Engel's opponents, however, were quick to jump on the Fordham Road exchange.

"This is so incredibly painful to watch from Rep. Eliot Engel," Bowman said, in a statement. "We need to be taking care of our communities right now — whether it's election season or not. It's clear that we need new leadership in NY-16."

Fink also released a statement, targeting past reports that Engel spent most of the coronavirus pandemic in his Washington suburb home, rather than inside his New York district.

Democrats will choose who will represent them on the November congressional ticket June 23.