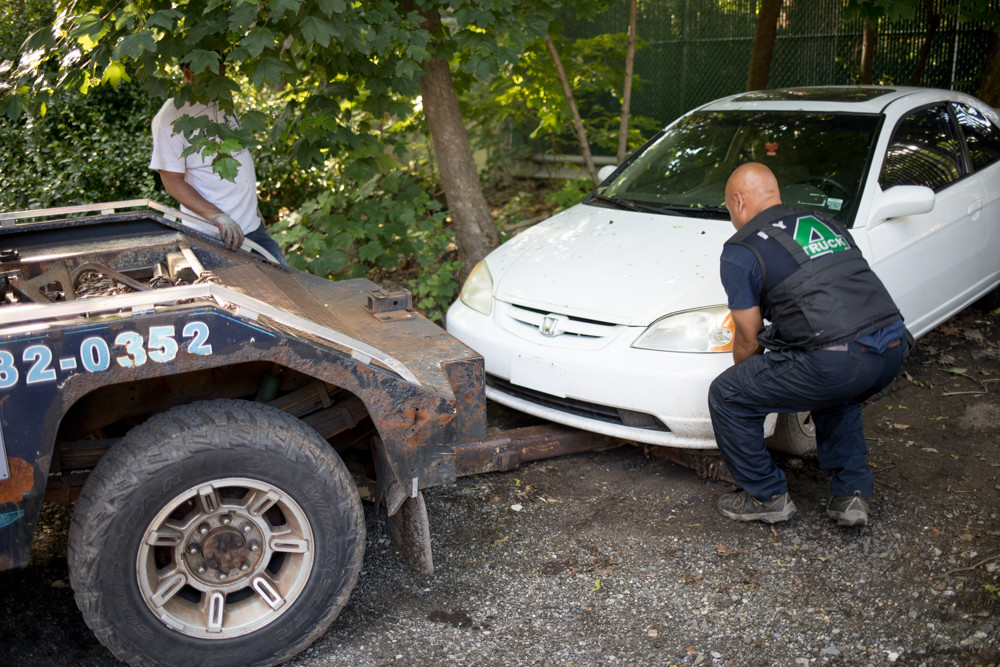 A tow truck operator secures an abandoned car to the back of the truck on West 247th Street between Henry Hudson Parkway West and Independence Avenue. It’s an area where Marlene Minarik has noticed an increasing number of abandoned vehicles. ‘This is an issue all over Riverdale,’ said Sgt. Mark Giordano of the 50th Precinct. ‘It is a major concern for the community.’
JULIUS CONSTANTINE MOTAL 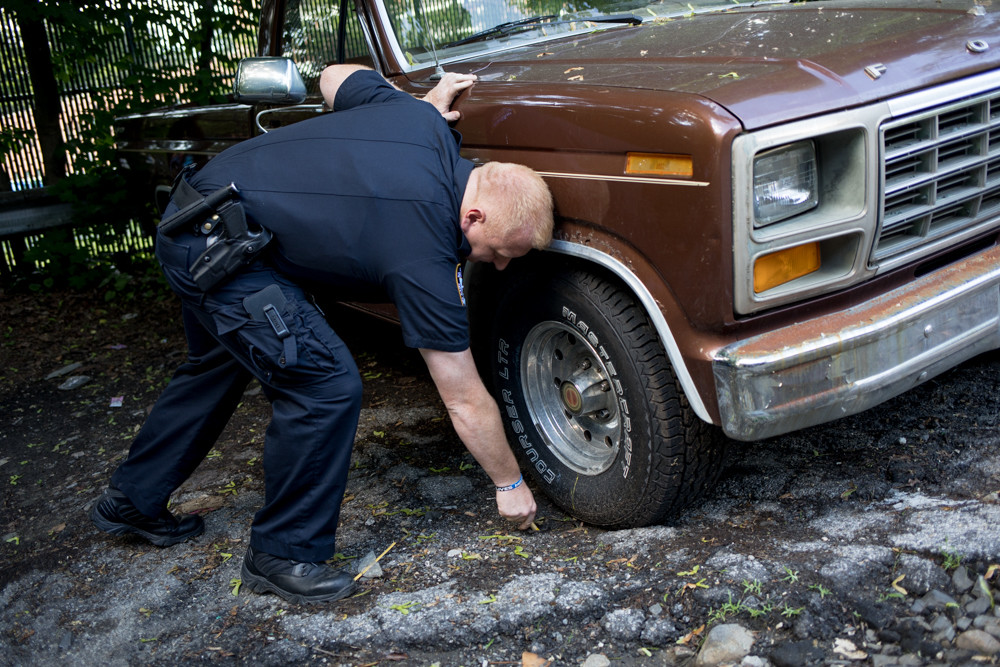 Officer Robert Edsall marks the tire of what he believes to be an abandoned car. Police must observe an abandoned car sitting on the street for at least seven consecutive days before they can have it towed away, said Sgt. Mark Giordano, neighborhood coordination officer supervisor for the 50th Precinct.
JULIUS CONSTANTINE MOTAL 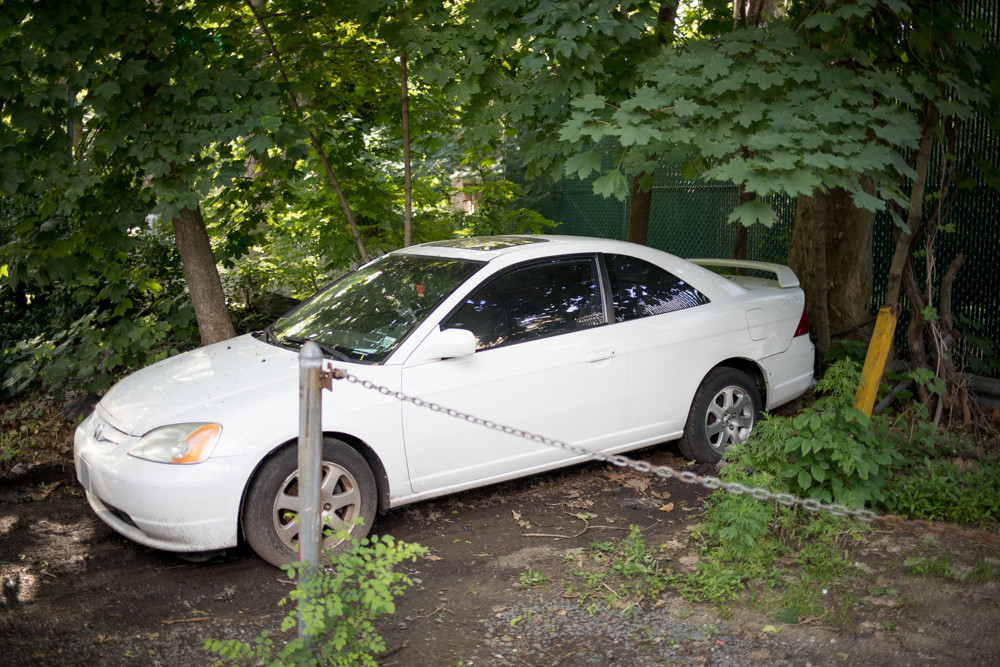 An abandoned car sits on West 237th Street between Henry Hudson Parkway West and Independence Avenue. Marlene Minarik has noticed more abandoned cars filling the streets of her neighborhood in recent years. ‘It’s just unsightly,’ the Riverdale resident said. ‘Some of them are really beat-up.’
JULIUS CONSTANTINE MOTAL
Previous Next
By ZAK KOSTRO

Car theft shows little sign of ending any time soon — and it’s not just limited to the theft of the car itself. Thieves will nab rims and tires, or just smash the windows, snatching back-seat bounty.

But theft isn’t the only auto-related issue some locals like Marlene Minarik worry about.

Most of the cars there haven’t been moved in more than a year, Minarik said. Some have out-of-state plates, if any at all. Others have expired or missing registrations.

“I am alarmed,” Minarik said. It “affects property values and the overall quality of life in our beautiful neighborhood.”

Some of the abandoned cars have missing windows, bumpers in disrepair, or they’re held together with stretched cords.

“It’s just unsightly,” Minarik said. “Some of them are really beat-up. They have gasoline in them, brake fluid, antifreeze — as they erode and get older, that’s all going to leak out.”

Minarik also noted an unhooked trailer that’s been sitting around for more than a year.

“It makes me feel bad because it’s such a beautiful, great neighborhood,” she said. “And the streets that have no alternate-side parking limitations, some people just abuse that and think it’s a place to store their cars for unlimited time.”

Fortunately for Minarik and her neighbors, Sgt. Mark Giordano — neighborhood coordination officer supervisor for the 50th Precinct — is tackling the problem, although eradicating abandoned cars is an ongoing effort.

“This is right near the top of our to-do list,” Giordano said, adding police officers John Labianca and Robert Edsall — the NCOs assigned to those neighborhoods — were already focused on other abandoned vehicles in the area in addition to those on West 247th.

“We have to work these things methodically,” Giordano said. “Sometimes new problems arise before we’ve solved some of the old ones. We have new complaints every single day. We try our best, obviously, to handle anything that’s priority,” like saving lives.

West 247th is not an aberration, which complicates the cleanup.

“This is an issue all over Riverdale, and my guys have been working hard to clean it up,” Giordano said. “It is a major concern for the community.”

In fact, Labianca and Edsall got to work chipping away at the problem June 5, towing two cars from the stretch along West 247th after an investigation showed at least one of the vehicles was unregistered, Labianca said. By law, cars without registration can’t be left on city streets.

“I had planned on waiting to get my ducks in a row, as it were,” Giordano said. But since his officers had to remove the unregistered vehicle — as well as one they’d initially believed to have been stolen years ago — “I figured we might as well just start.”

In addition to towing two cars, Edsall and his partner marked several others’ tires to be ticketed and towed at a later date.

“There’s really not a lot we can do” beyond ticketing and towing, Giordano said. “The reality is that a lot of these cars — if it’s kids that are joyriding, if they get reported stolen, or if they’re just abandoned from owners, they could come from Yonkers — it really is a difficult thing to prevent.”

Police must observe the abandoned car sitting on the street for at least a week before they can remove it.

“Even if the car clearly has been there for 20 years, it doesn’t matter,” Giordano said. “For right now, that’s the best we can do because of the time constraints.”

It shouldn’t come as a surprise, however, that this abandoned vehicle wasteland has cropped up in an otherwise bucolic part of the borough.

“It’s quieter” in Riverdale, Giordano said, “so it’s an easy place to dump a car. There’s probably fewer cameras. There’s fewer streetlights. There’s not as many people out all the time, day and night.”

Furthermore, traffic agents likely focus less on a street like West 247th than they might on busier ones, Giordano said, making it even more attractive for those looking to divest themselves of an unwanted jalopy.

When it comes to fighting car crimes in general, the community also needs to do its part.

“We’re not going to be able to 100 percent prevent” theft and break-ins, Giordano said. “Obviously, we are trying to make ourselves visible so people don’t do that.”

His advice to car owners — don’t leave valuables in the car, especially in plain sight.

“Prevention is the biggest factor,” Giordano said, “because if people can’t get anything, they’re going to move on to other spots where they can get something.”

Through the beginning of June, car theft is up 17 percent in the precinct, according to New York Police Department statistics, with 28 vehicles stolen.

“Sgt. Giordano got back to me immediately” after she sent photos of the abandoned cars to the 50th Precinct, Minarik said. “He was really, really responsive and fantastic.”

“You do see the police officers make their rounds,” she said.

“I think the people who live in Riverdale are really good neighbors, in my experience, (and) very helpful. We watch out for each other. We keep an eye on things in the neighborhood.”