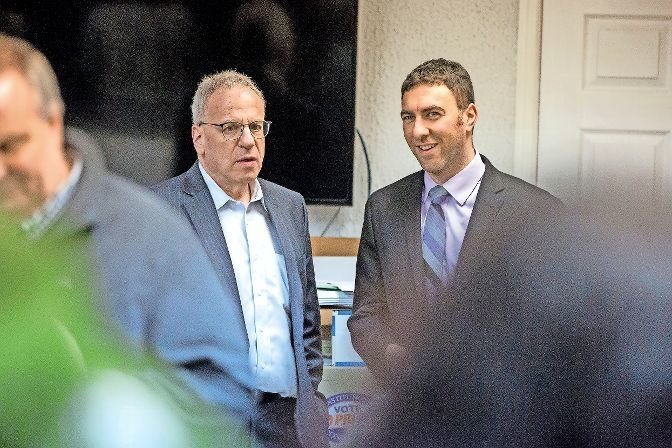 There could very well be two Dinowitz family members representing this area on both the city and state level, as Eric DInowitz, right, is poised to become the next city councilman, getting a huge boost from his father, Assemblyman Jeffrey Dinowitz.
JULIUS CONSTANTINE MOTAL / File
By MICHAEL HINMAN

Eric Dinowitz is well on his way to becoming this region's newest city councilman after absentee and military ballots increased his lead over Mino Lora. Still, it wasn't enough to push Dinowitz past the 50 percent threshold, meaning elections officials will institute ranked-choice balloting on Monday.

More than 2,500 absentee votes were added to the tallies of the six candidates seeking to succeed Andrew Cohen on the city council Sunday, with Dinowitz earning more than 1,400 — or 57 percent — of those ballots. Some observers felt Dinowitz, son of Assemblyman Jeffrey Dinowitz, would do well in absentee since he made a concerted push during the campaign to win those ballots.

Still, that wasn't enough to overcome the rest of the field. Spuyten Duyvil non-profit executive Mino Lora picked up another 350 votes. That gives her 22 percent of the total vote compared to Dinowitz's 46 percent.

The absentee ballots made what was already a near-impossible situation even more impossible for Lora. In order for her to come out on top through the ranked-choice elimination count, she would have to rank higher than Dinowitz on more than 2,600 of the ballots the two didn't win in initial voting. Dinowitz, however, would need to outrank Lora on just a little more than 375.

Ranked-choice counting eliminates the lowest vote-getter in each round, reassigning the voter's next ranked candidate to those who remain. This continues until there are just two candidates left, and the one with more than 50 percent wins.

Lora would need to be the higher choice on 88 percent of the remaining ballots — which is likely quite insurmountable.

Lora, however, has turned her attention to the June 22 primary, where many expect a higher turnout than the barely 10 percent who showed up for the March 23 special election. Lora had planned a rally at Van Cortlandt Park on Sunday with the likes of state Sens. Alessandra Biaggi and Gustavo Rivera, Assemblywoman Yuh-Line Niou as well as Councilman Brad Lander and well-known state activist Zephyr Teachout. However, that rally was postponed because of rain.

The special election installs a council member through the end of this year. Voters on June 22 would decide who will fill the seat for the next two years beginning in January.