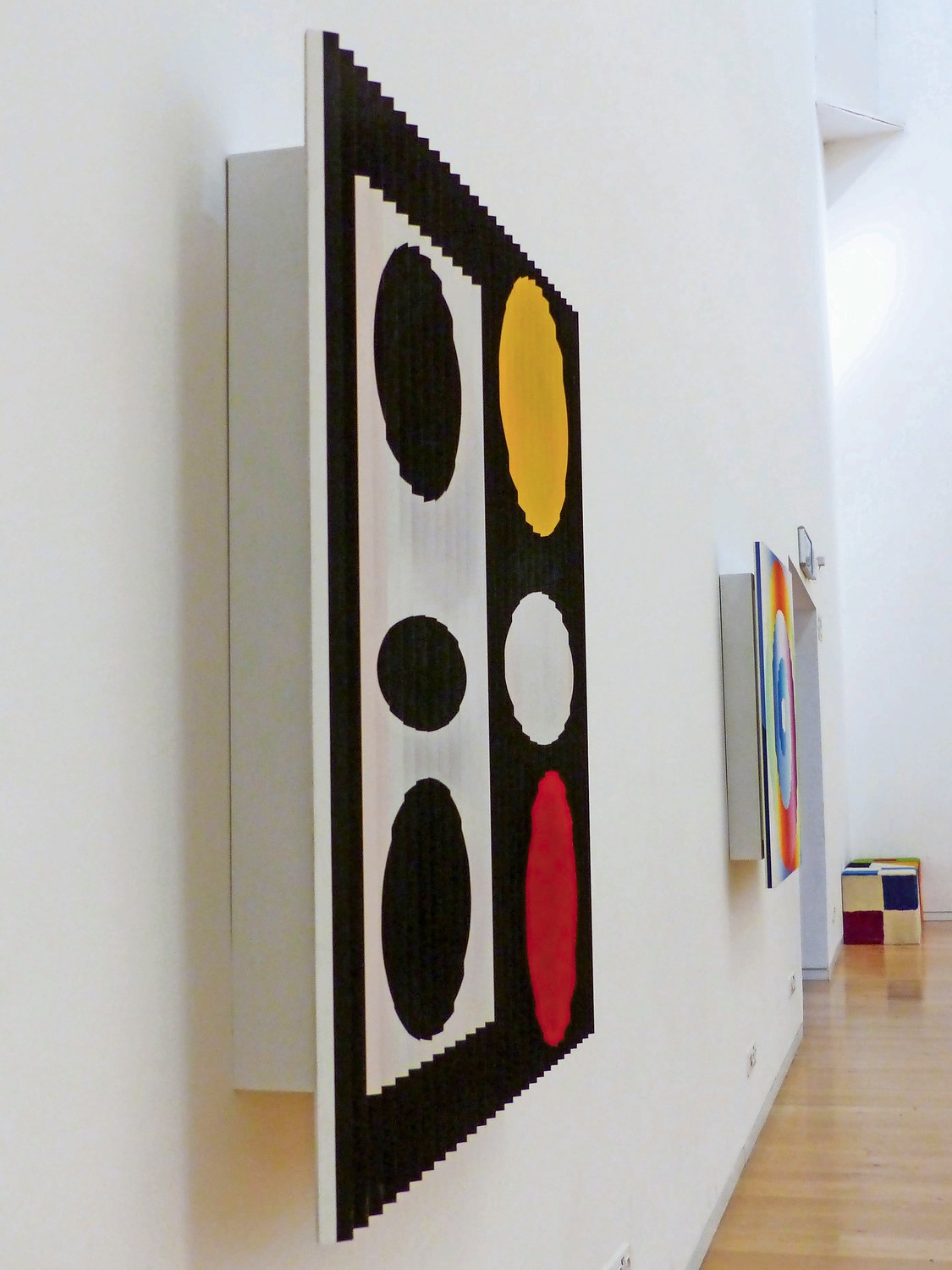 Yaacov Agam is as well known outside of Israel as he is in, and the Agam Museum in Rishon LeZion is a must-stop for those who would love to see his abstract pieces- some of them interactive- up close.
Courtesy of Sura Jeselsohn
By SURA JESELSOHN

Our trip to Israel was fast concluding, and I asked friends for recommendations for a short day trip.

The best suggestion was to visit the Agam Museum in Rishon LeZion since we have always enjoyed the work of Yaacov Agam. I was surprised that I had never heard of this museum before since Agam is so well known both inside and outside of Israel.

It turns out that this museum opened only last November, and is the only museum worldwide solely devoted to Agam’s work.

On our short trip from Jerusalem to Rishon LeZion, our guide commented that the area used to be covered by sand dunes — mounds of wind-blown sand usually found along a beach or in a desert. Dunes have two defined sides, the windward side — facing the blowing wind — and the slipface, which is the opposite face of the dune.

A group of dunes is called a “dune belt” or “dune field,” and a large dune field is an erg.

Dunes are not just piles of sand, they have specific shapes based on the wind patterns that form them. The five basic categories are crescentic, linear, star, dome and parabolic.

The Israeli dune fields along the Mediterranean coast are considered to be about 1,000 years old based on the age of archeological materials found beneath them. The sands originate in the mountains of Ethiopia. They flow downstream to the Nile Delta, carried along by the Nile currents.

Sea currents then carry them along the curved southeastern coast of the Mediterranean basin before they are finally blown inland by shore winds.

As of this moment, about two-thirds of these coastal dunes have been built over, and half of the remaining ones are being degraded by invasive species.

We arrived at the museum to see Yaacov Agam himself being photographed by a news crew at the museum entrance surrounded by 20 monumental columns named the “Pillars of Clilla,” created in memory of his late wife. Although both Yaakov and Clilla were born in Israel, they met in Paris at Select, a café frequented by Israelis.

Born in 1928, Agam is a vibrant and gregarious man still very much involved in his art. I was uncomfortable about intruding on him, but numerous museum visitors approached him requesting to be photographed together, and he clearly enjoyed the interaction.

The museum is a testimonial to a creative mind that is still deeply engaged. While his studio assistants do most of the actual work, the designs and concepts are his.

Much of his current work focuses on videos and interactive pieces. I was particularly charmed by two such pieces: One involved touching a screen filled with rows of circles, where each circle touched produced a specific musical tone. The visitor, thereby, produces a unique musical phrase.

The second involved moving colored rectangles. The visitor has to insert a color similar to the one whizzing by. I rarely play computer games, but this was a lot of fun!

Agam’s background is singularly unique among modern artists. The son of a kabbalist rabbi, Yehoshua Gibstein, he received a traditional religious education at home. Possibly because of Judaism’s restrictions on creating realistic images, his work is entirely abstract.

Judaism also is enormously conscious of time. There are seven days in the week. The month is based on lunar cycles and rigorously calculated. Holidays come at fixed moments within the yearly cycle. And there are frequent commemoration of events from the distant past.

In addition, the aforementioned dunes also were formative. Young Yaacov spent much time outdoors observing the movements of nature, and the gradual — and sometimes not-so-gradual — changes of the landscape, particularly the dunes.

So, between the nexus of time and movement, a fire was lit. Until the advent of kinetic art, all artistic creations were static in relation to time. Art consisted of immortalized snapshots.

However, with the introduction of time as an accessory to movement, pieces now had a dynamic quality never considered before.

We saw numerous pieces where what you see is not what you get. Because of the singular construction method of his “paintings,” there are minimally three images presented, depending on the visitor’s viewpoint: the extreme right, the extreme left or straight on.

And of course, there was a continuum of visualizations as you moved from right to left.

Agam’s objective is to make the audience an integral part of the experience and an active part of the work.

This column is devoted to natural history, and as delightful as Agam’s works are, you may be wondering about the choice of this week’s topic. Stay tuned!