Eyesores of the year 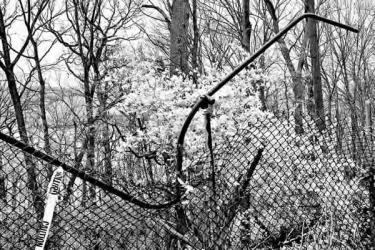 The eyesore that never was : An eyesore slated for the Oct. 29 issue never made it to print. The Parks Department beat ‘The Press’ to deadline, combating the Ewen Park vandals with bold strokes of green paint.

Graf iti Mag net : C-town, its bad paint-over job, the subject of an April 2 eyesore, was painted over again shortly after it appeared in ‘The Press’ ... and this time, they got it right. But will they be able to stem the tide? Sources say no.

Potholes No More : The Department of Transportation resurfaced the pot-holed stretch of Broadway near the bridge to Manhattan. But should it have taken so long?

Mangled: The Parks Department had eight months to replace a mangled stretch of fence along Palisade Park. We’re surprised this rusty reticulation hasn’t put an eye out.

Grafiti Alley: The Marble Hill “canyon of Krylon” lives on. The shadowy Marble Hill step stairs at West 228th Street are as covered in tags as they were in early April when they appeared in ‘The Press.’

Poop on your shoe : Waaaay back in February, ‘The Press’ ran six different severely vandalized, or neglected “clean up after your dog” signs. But we sidestepped the real issue: Do we really need the department of sanitation to remind dog owners how gross it is to step in feces? Come on, there is no excuse. Clean up your act!

Thrown for a loss