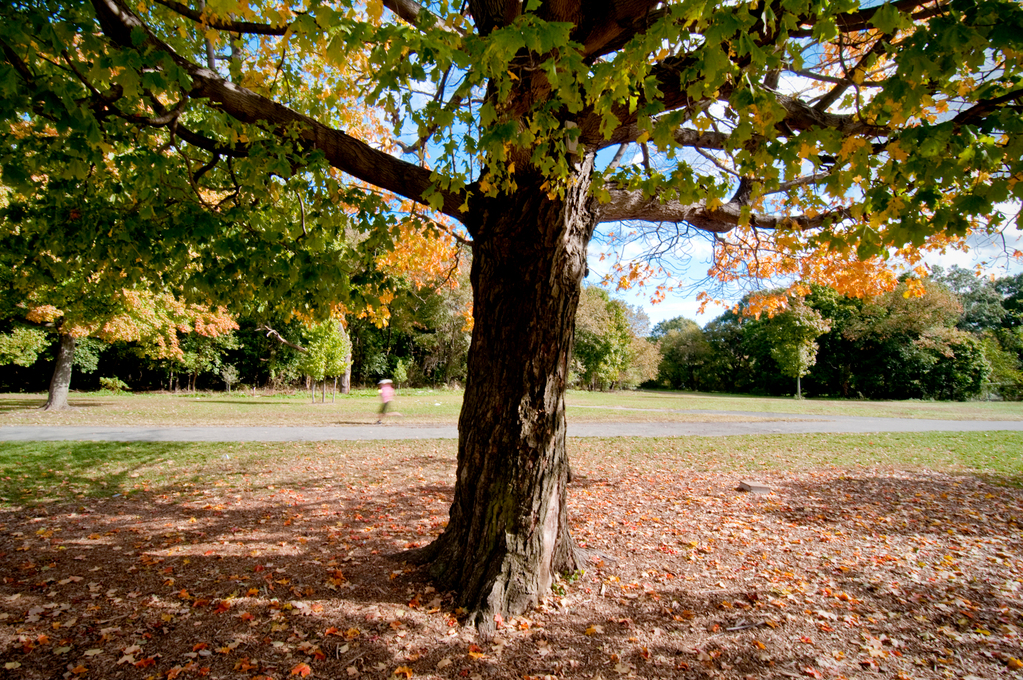 October 14-15, 2010 - Bronx, NY : A lone sugar maple, which has sat at the eastern edge of the Van Cortlandt Park parade grounds for decades, is losing its leaves. The Park service is working on saving this majestic tree.
Karsten Moran

October 14-15, 2010 - Bronx, NY : A lone sugar maple, which has sat at the eastern edge of the Van Cortlandt Park parade grounds for decades, is losing its leaves. The Park service is working on saving this majestic tree.
Previous Next
By Raphael Sugarman

For perhaps a century or more, it has been one of the most admired trees in Van Cortlandt Park. Resting about halfway around the track, it has served as a rapturous signpost for thousands of cross-country runners, casual strollers and breeds of dogs and their walkers too numerous to number.

Each October, this Sugar Maple has surely been responsible for distracting many a motorist along Broadway, who couldn’t help but sneak a peek at the tree’s autumnal pageant of burgundies, sepias, russets, coppers, and always, remnants of green.

How many of these drivers know — how many Bronxites know — that this is the first tree in the Parade Ground to change color each fall?

And how many know the tree has regressed into a desperate fight for survival?

“It’s in a definite state of decline,” said Macsood Hoosein, project manager and administrative horticulturist for Van Cortlandt Park. “You can see that some branches at the top of the tree are already dead and there is no terminal bud at the top, which regulates the growth of the tree.”

Mr. Hoosein has drawn up a plan for extending the life of the Sugar Maple, including pruning, aerating the soil and providing mulching, as well as mounting a fence around the tree. The total cost of the restoration plan is about $2,200, which the Van Cortlandt Park Conservancy hopes to raise.

“It is a centurion,” said Mr. Hoosein, marveling at the tree’s trunk, which is more than 3-feet in diameter. “To see one that has survived this long is really special.”

The reasons for the tree’s decline are based on the nature of the species, its location in the park and, perhaps, on lack of maintenance, Mr. Hoosein said.

Native to North American hardwood forests, Sugar Maple trees are less common in the city’s parks than other species, according to Mr. Hoosein.

“Every Sugar Maple is special because they are so rare,” he said.

Part of the challenge for Vannie’s Sugar Maple is that it sits on a small jettison of grass attached to the central Parade Ground and away from the protective main forest. This position makes it certain to get its soil trampled and leaves it susceptible to high winds and lightning.