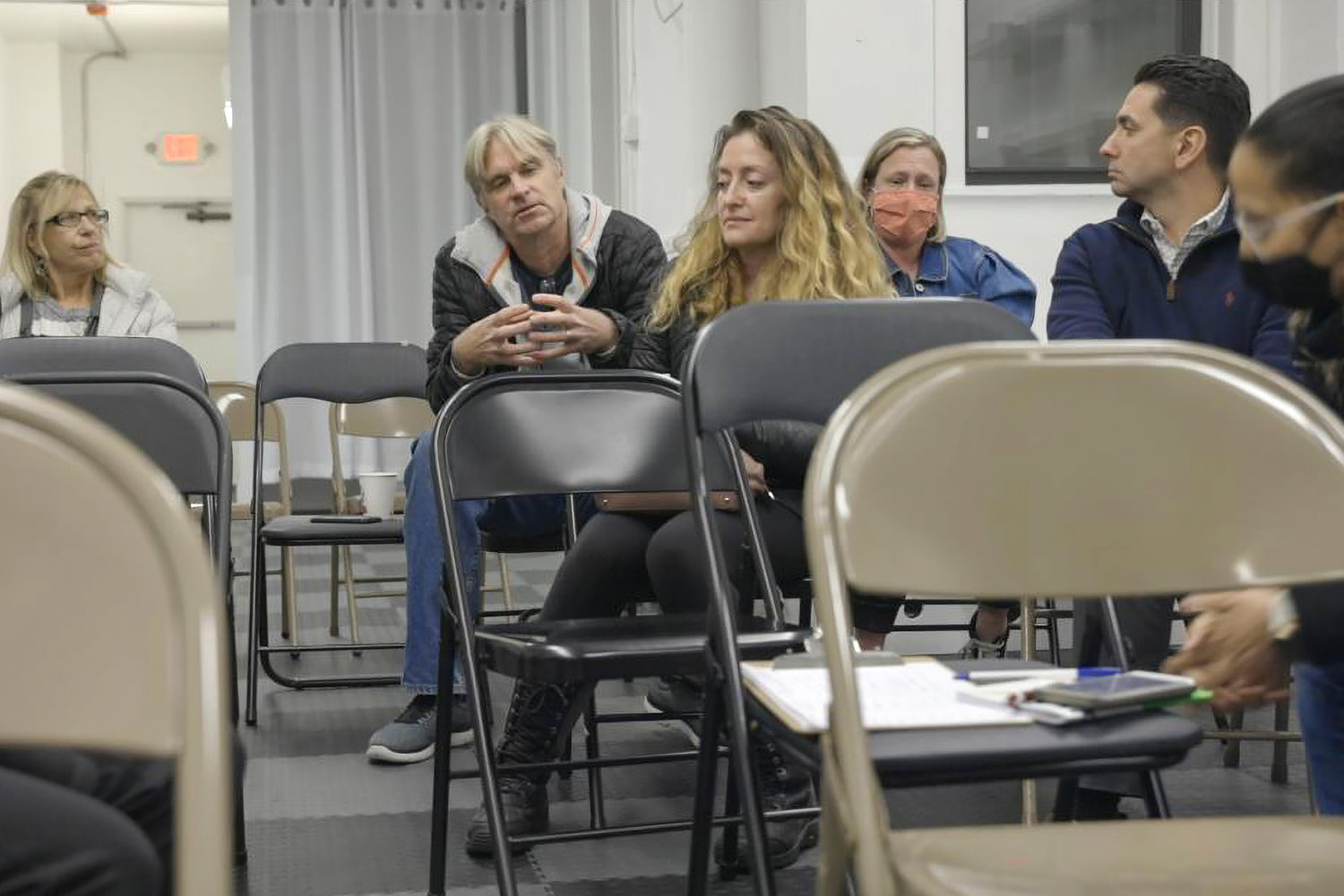 Opposition against a proposed single men’s homeless shelter at 6661 Broadway has been quite vocal, including a number of neighbors who gathered recently at a nearby Mosholu Avenue business to share why they hope the city’s homeless services department will put this proposed shelter somewhere else.
JOSEPH DE LA CRUZ
Support journalism

The stakes are high. Too high, in fact, when it comes to a proposed men’s homeless shelter at 6661 Broadway for those who live and work close to it.

In a period plagued globally by a pandemic and much closer to home economic crisis, in this particular neighborhood just south of the Yonkers city line, it’s safe to say no issue is bigger.

“I’ve been through the last summer fighting with people (who’ve been) overcrowding the parks,” Belinda Hancock, who lives within a block from the proposed shelter site, told The Riverdale Press. “That’s one battle that I think we’ve finally got over. But now we’re being dumped on with another issue.”

The mere presence of people experiencing homelessness in her neighborhood, however, wouldn’t necessarily be a new occurrence for Hancock. She already has daily interactions with the homeless, who she says can often be seen along the street, picking up cigarette butts, loitering at the bus stop — in some cases talking to themselves or with their hands inside their pants.

Now she’s concerned the addition of a men’s shelter would mean these already existing problems would only get bigger.

“I mean who’s to say that if these men miss curfew and refuse to go to another shelter that they won’t end up sleeping on the park benches or in the lobbies of some nearby buildings?” Hancock asked. “We don’t know who these people are.”

Other shelters set the stage

Hancock was one of about a dozen people invited to share their stories with The Press at a storefront business a few blocks away from where the city hopes to open a facility housing 130 men by the end of 2023. The city’s homeless services department says each of the men will check in at a Manhattan facility before being transported to one of New York City’s most northern points on Broadway near West 262nd Street.

It’s safety that’s on the mind of Robin Ferrer. Any spike in crime threatens the safety he says his family has enjoyed in this part of the community across from Van Cortlandt Park for years.

“I think that, for me, safety really illuminates the importance of trying to keep Riverdale what it always has been for many people,” Ferrer said.

But crime is up before the shelter has even arrived, which has Ferrer worried if this is just a preview of a recipe for disaster.

“We’ve already had a number of episodes just in the last couple of months with several apartments and folks in the area who have been distributing narcotics and other things,” Ferrer said.

“I think of the area where the proposed site will be located. You’re talking about Broadway near Yonkers, where on that side the area is already riddled with crime and violence.”

And then what about the homeless men themselves? What’s the plan to help them, the father of three asks. How will they be kept safe?

“I think for my wife and I, the most important thing is trying to understand what plans are in place to help with the recovery of these men who are going to be congregated in this shelter,” Ferrer said. “When I hear 130 people in one particularly small building and being broken out into eight people per room or per space, I think a lot of the issues that within itself can bring. There are way too many questions at this point and not enough answers about how this facility is going to be managed and properly run.”

Ferrer, like many who attended a Community Board 8 meeting last month discussing the shelter, feel the city’s liaison on the project — social services department deputy commissioner Erin Drinkwater — has been quite vague on how the shelter would truly help the neighborhood and the city as a whole.

“I haven’t heard much about what services are going to be provided and what that looks like,” Ferrer said. “What measures are in place to protect the community? Are there going to be curfews? You know, who are the people that are qualified to really run this program?”

Drinkwater attended CB8’s health, hospitals and social services committee last month, joined by the man charged with running the 6661 Broadway shelter, African American Planning Commission Inc., chief executive Matthew Okebiyi. Both said the proposed facility would have “layers of security,” including a number of security cameras both inside and outside the shelter.

However, that’s not enough to calm the worries of John McCaffery, who has lived in the neighborhood for more than 60 years. Especially when he sees continued reports of violence inside some shelters across the city. That includes at a facility on just the other side of Van Cortlandt Park, where Ana Charle — the director of the Project Renewal homeless shelter in Wakefield — was murdered in 2017 by who police described as a former resident of the shelter.

“I’m looking at this Ana Charle that was stripped naked and run down in the street and shot in the head three times at a homeless shelter that she was taking care of,” McCaffery said. To feel at least some level of safety, he believes the 50th Precinct would need to ramp up patrols, setting up a mobile unit outside the shelter and keeping tabs of its inhabitants.

Yet, that still may not be enough for Margie Carrasco, who’s had her own personal experiences she’d rather not think about.

“I’ve been physically assaulted twice by residents from a men’s shelter,” Carrasco said. She described those incidents as happening near a shelter in Manhattan’s Financial District. Carrasco says it forced the day care she managed to increase security.

“We’ve had one security officer assaulted with a glass bottle by a resident of the shelter,” Carrasco said. “We’ve also had one man repeatedly expose himself in front of children at the day care.”

It makes her long for what the neighborhood has down the road at 5731 Broadway that caters to young families trying to get back on their feet, not just single men.

“If (6661 Broadway) would have been a family shelter,” Carrasco said, “I might have had another view.”

Out of sight, out of mind?

Richard Espinal’s opposition to the 6661 Broadway shelter, however, is much different from some of the others.

“What concerns me is that if there’s a real intention to actually help these men turn their lives around — sticking 130 of them in one building is not the pathway to do that,” he said. “Putting 130 men (in that shelter) isn’t housing them, it’s warehousing them — literally trying to dump them and forget about them.”

Espinal is a community organizer who says he’s worked with people experiencing homelessness for more than 20 years.  He stressed the need for those staying at shelters to be near environments beneficial to their well-being and productivity.

“When the city opened up the shelter on West 235th Street, right across from the Stop & Shop, I wasn’t opposed to that family shelter because, in my mind, it’s across the street from the supermarket,” Espinal said. “It’s right in front of a train line. It’s right next to a precinct. Any service that any family would need is available to them.”

But 6661 Broadway is so out of reach for basic needs — like transportation — Espinal fears the city would leave these men high and dry.

“Putting them at the very end of the city, it’s like if they could’ve booted them any further, they would have,” Espinal said.

Citing his own work history, Espinal believes it’s important not to demonize those experiencing homelessness.

“I know that, overwhelmingly, the majority just needs some guidance and help,” he said. “They need some services. If (city officials) had said to me and everyone else, ‘We’re going to do 20 to 30 (people), and we’re going to provide intensive services, we’re going to work with them,’ I’d be for it.

“But 130 just means you’re trying to find a way to dump them. They’re not looking to help these men.”