Fight club worth talking about 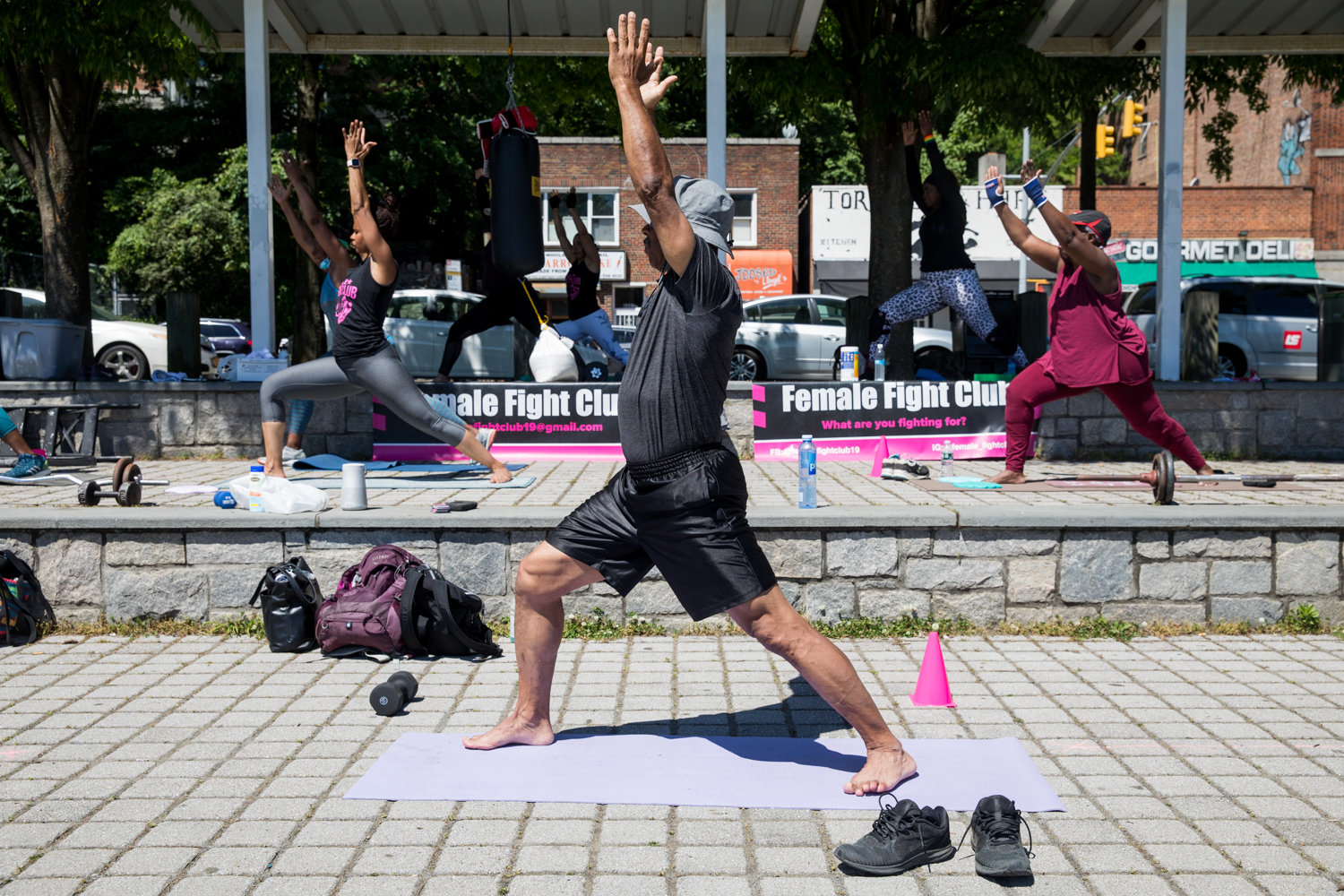 While the group may be called Female Fight Club, they welcome everyone, including men like Walter Price, center.
JULIUS CONSTANTINE MOTAL 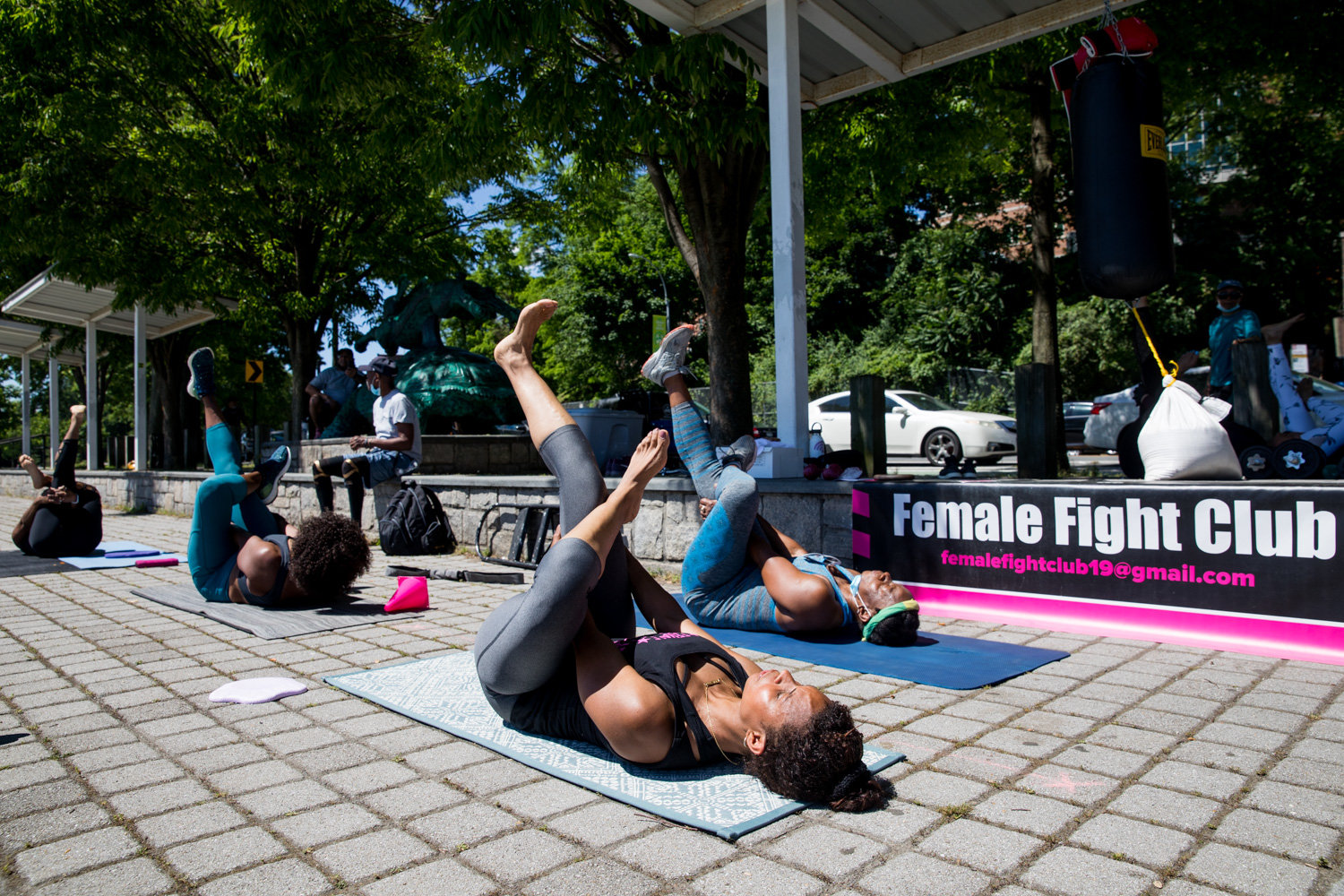 Members of Female Fight Club, a fitness group, cools down with yoga at the end of a workout routine in Van Cortlandt Park. Johanna Edmondson founded the club in the early days of the coronavirus pandemic.
JULIUS CONSTANTINE MOTAL 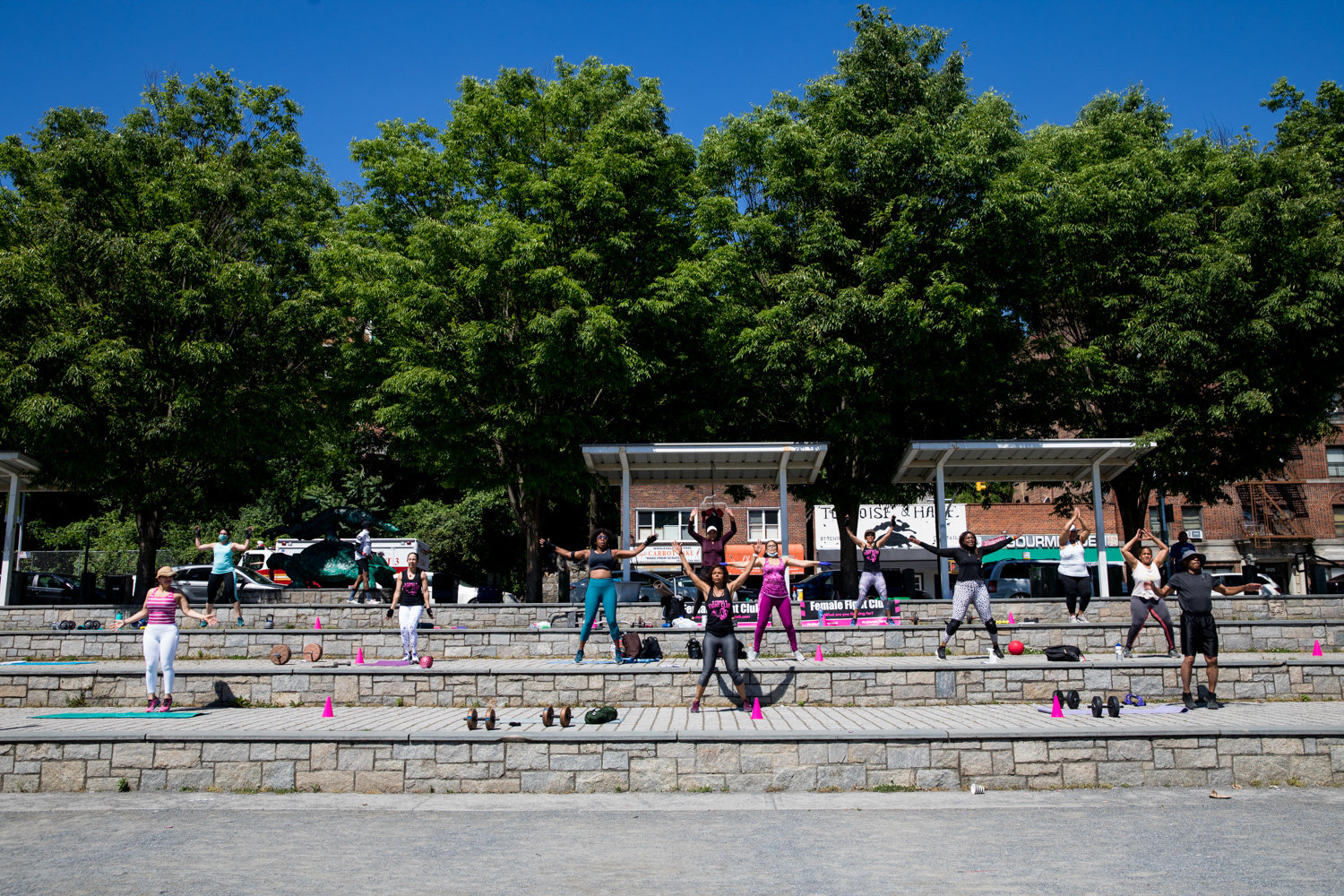 Members of Female Fight Club, a fitness group, do a round of jumping jacks with appropriate social distancing in Van Cortlandt Park. The club was founded by Johanna Edmondson in the early days of the coronavirus pandemic.
JULIUS CONSTANTINE MOTAL 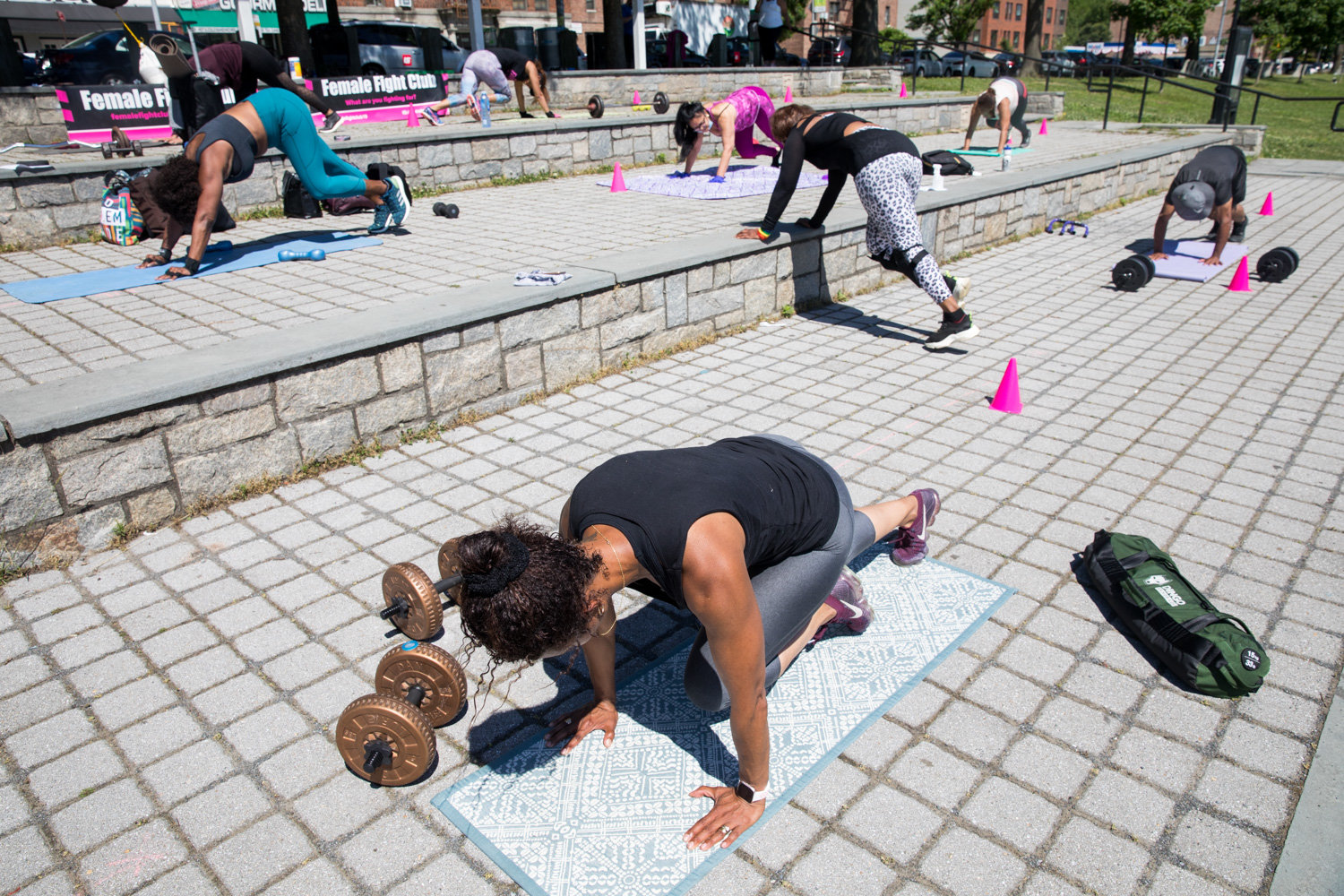 Female Fight Club members do a round of mountain climbers during a session in Van Cortlandt Park.
JULIUS CONSTANTINE MOTAL 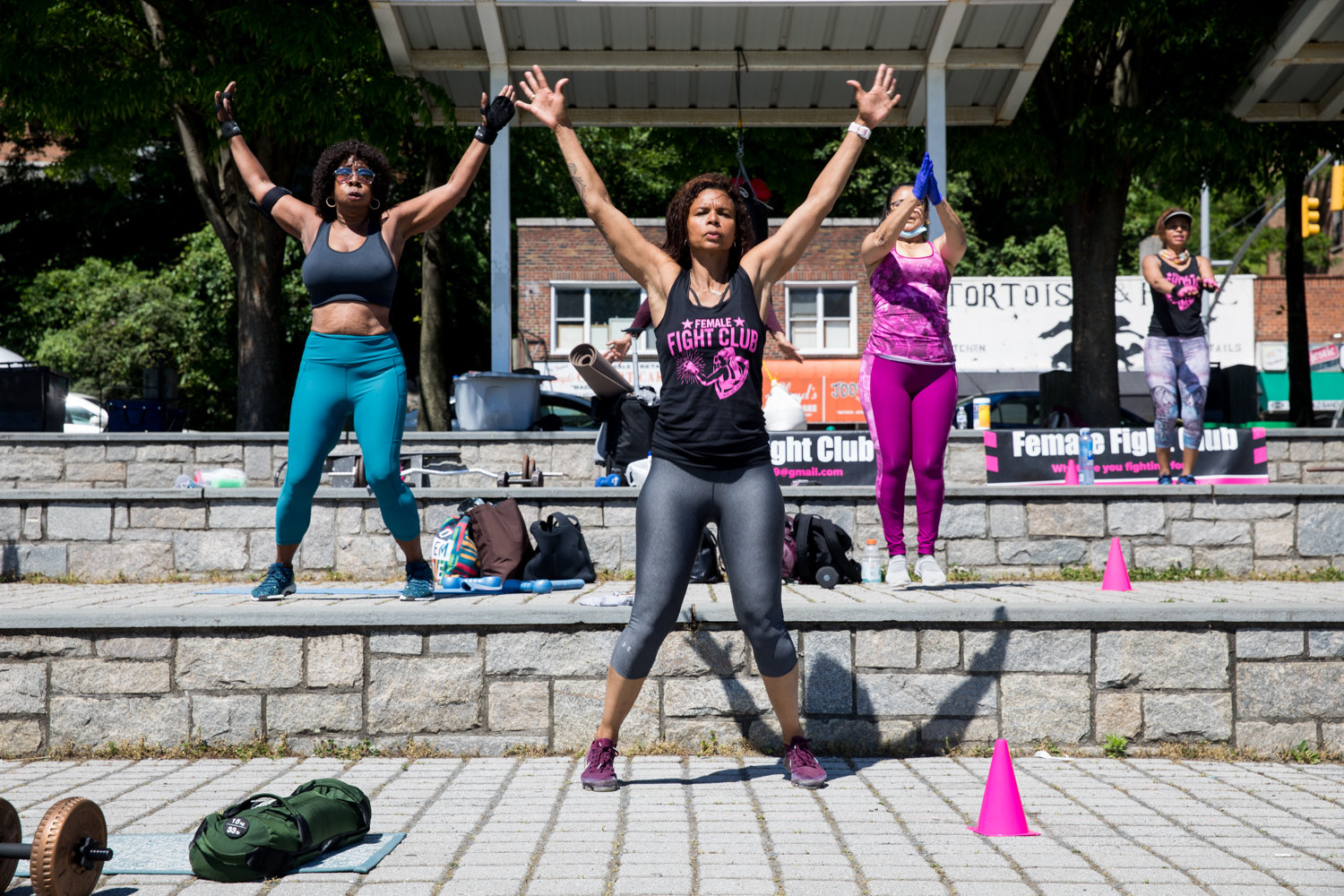 The first rule of this fight club is to know what you’re fighting for. Johanna Edmondson decided to fight for herself.

Amidst the pandemic and protests, Edmondson couldn’t stand staying home any longer. She and a group of friends decided to take their daily workouts to Van Cortlandt Park after their usual spot, 24 Hour Fitness, closed.

Others took notice of the group and asked to join. Realizing there were more women like Edmondson who were hungry to get out of the house, the Female Fight Club was born. Through wellness, the club aims to empower women to fight for their lives and cope with losses surrounding COVID-19.

The club meets every morning, Monday through Friday. The activities are open to anyone, Edmondson said, so long as they bring their exercise gear and maintain proper social distancing. The ladies are treated to three rounds of synchronized workouts all while cheering each other on.

Each workout ends with a victory lap around the park.

“We’re stronger now than we were at the gym,” Edmondson said. “Being out in the fresh air makes all the difference.”

What started out as fewer than 10 women workout out together has grown to nearly 30 members — including one man — who are dedicated to staying fit through the pandemic.

Edmondson has created 50 easy-to-follow workouts for the club. She makes it so everyone can get involved — from the veteran gym buff, to the newbie wanting to get active during stay-at-home. The regimens are also available for women to do from home when they can’t come outside to the meets.

Knowing there are women waiting for her in the park every morning keeps Edmondson motivated to continue on. For many members, the club is the only consistent thing in their lives at the moment.

“Sometimes I’ll turn on the news and I get so scared,” Edmondson said. “But I know I have to continue. I have people counting on me.”

Consistency was something Allison Murphy was looking for. Murphy teaches exercise physiology at Mercy College, but the transition to online learning wasn’t an easy one. Thinking stay-at-home would only last a few weeks, Murphy initially took the changes in stride. But as time went on, her workload became overwhelming.

Feeling depressed, she decided to take her husband’s advice and started jogging around her neighborhood. But it wasn’t enough.

“It felt like I was doing it for survival,” Murphy said. “I wasn’t enjoying myself.”

Murphy came across the club doing one of their regular workouts at the park. She was drawn to their challenging workouts and empowering group dynamics. However, it was their commitment to a schedule that had her bringing her equipment the next day.

It’s been a month since Murphy joined the club. She says that she’s finally found the stability she’s been looking for.

“I plan on staying with the group for as long as I can,” she said. “Even when the gyms open up again.”

Whether or not Edmondson takes the club back to a gym — 24 Hour Fitness has since closed permanently on West 231st Street — or sticks to the park, that doesn’t matter to Sol Bobonaua. She’s staying either way.

With the Female Fight Club since the beginning, Bobonaua has never liked working out in a group. So the first few times she went out were disastrous.

But thanks to the encouragement she receives from other members, Bobonaua kept coming to the meets, and now looks forward to getting her sweat on.

Edmondson’s regimens are never boring, Bobonaua says, and she has routines for yoga, aerobics and pilates. Instructors are invited to teach the club as well.

But the club is about more than staying fit. It’s an emotional space too. Outside of club meets, Bobonaua says many members feel lost. The few hours each day at the park have helped the women escape from the current realities of the world. The club has become the only certain thing they can count on.

“It’s been a saving grace for all of us,” Bobonaua said. “Everything else is up in the air, but the club is always here.”

With 24 Hour Fitness gone, Edmondson is seeking a permanent location for the club, and the park has become prime real estate. But there could be a bump in the road there. Just this past week, someone from the city’s parks department told Edmondson the Female Fight Club is now too big, and they can’t keep meeting at the park without a permit.

The initial blow was surprising to a club that has taken social distancing seriously.

“I believe we should be able to stay here,” Edmondson said. “As long as we’re following the rules.”

A permission letter from the parks commissioner is needed for the club to return with all of its members, Edmondson said. But she’s not letting this deter her from her fight. She plans on returning to the park — even if it means only bringing a few members at a time.