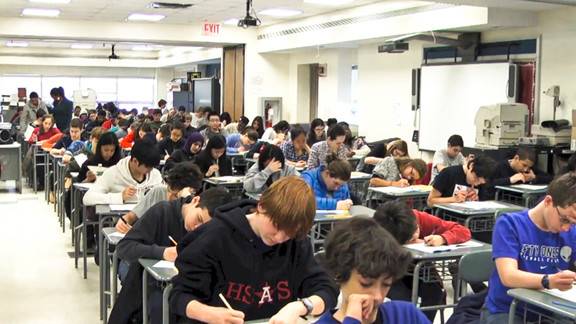 A recent High School of American Studies at Lehman College graduate is working to reform admissions to New York City’s specialized high schools — from the inside.

In his 23-minute documentary, entitled Reforming Admissions, Eero Arum asked American Studies teachers and students to share their views on the SHSAT.  That exam is currently the sole criterion for entrance to New York City’s eight specialized schools, including American Studies, Bronx Science and Brooklyn Tech.

The film that results is a call for reform, in which both educators and students discuss what they perceive as an inequitable system.

“It had been something that really concerned me throughout my experiences at HSAS,” said Mr. Arum, 18, who began the film in a documentary filmmaking elective last fall.

Though the piece was meant to be a 10-minute film completed in one semester, both Mr. Arum and his teacher, Anthony Thoman, realized the scope of the film was broader than that. Mr. Thoman granted his student an extension.

“I could see he had struck gold in exploring a truly relevant and topical subject,” said Mr. Thoman.

Much of the documentary centers around demographics at American Studies, which Mr. Arum found had shifted over the years.

When he arrived in 2010, he explains in the film, his class was “the least diverse in school history.” Fifty-six percent of the student body in 2010-2011 consisted of white, Asian or students identifying in the “other” category students, compared to 44 percent black and Hispanic.

“Most people would argue that one of the roles of education is to create a democratic society,” Mr. Arum said. “It doesn’t make sense to argue that the specialized high schools should be an exception to the rule.”