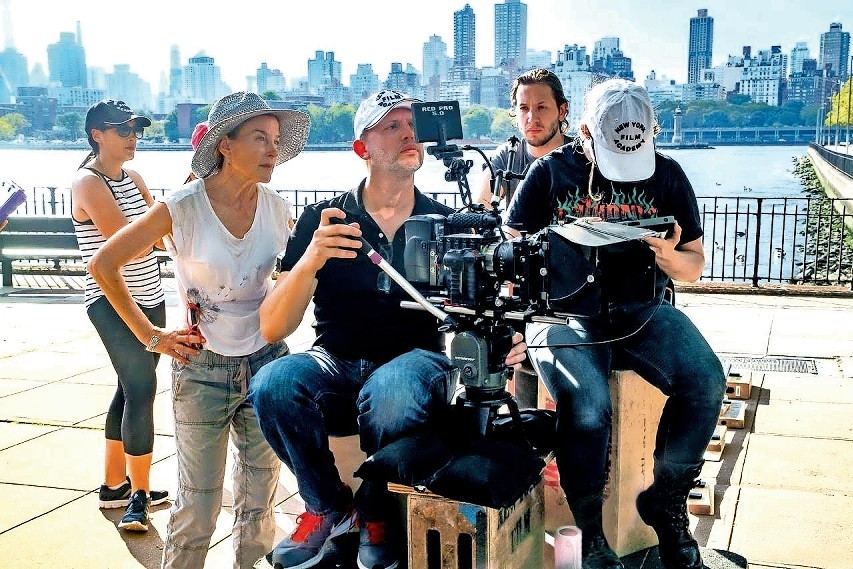 When Blanche Baker wrote the script for “Streetwrite” nearly two years ago, she had no idea it would perfectly align with the day-to-day political issues that surround the country.

Baker — a Riverdale resident, actress known for roles in “Sixteen Candles” and the 1990 version of “The Handmaid’s Tale,” as well as an instructor at the New York Film Academy — wrote and directed “Streetwrite,” a short musical film focusing on free speech and censorship in America. A group of young adults are central to the plot, arrested for attempting to create graffiti art in a public place.

The group is put on trial, and two opposing lawyers duke it out through original lyrics. The lawyer defending the students in the courtroom belts out the film’s overarching question: “How can speech be free if only those who pay can speak?”

But instead of addressing the issues through dialogue, it’s expressed through song and dance.

Students at the New York Film Academy made up the cast as part of an academic requirement to appear in a musical film for the school’s musical theater conservatory curriculum, Baker said.

For her, the dive into a politically charged film was “unchartered territory” for both her and her students.

“I think that kids like to do movies about parties,” Baker said. “So it was just interesting to see the students suddenly become active in political debate as a result of working on the project, and that as artists, you can become involved in things that are so much bigger than yourself.”

“As an educational institution for the arts, we feel we have an obligation to address social issues through our craft,” he said. “Through a production like ‘Streetwrite,’ students are not only learning about the craft of filmmaking and film performance, but they also become acutely engaged in a societal issue that affects us all.”

Filming took place over the course of more than a year as Baker drew inspiration from political graffiti she found around New York City. Although many scenes were shot across the city, some scenes also took place at the Ethical Culture Fieldston School.

As “Streetwrite” began to gain traction after screenings at multiple film festivals, The New York Public Library caught wind of it. Since then, “Streetwrite” has been screened for teenagers at multiple branches so far, including the Jerome Park Library.

The film will make its way to the Kingsbridge Library this month, as well as other locations like the Ali Forney Center, a nonprofit organization dedicated to helping homeless LGBTQ youth.

Caitlyn Colman-McGaw, manager of young adult educational programming at the New York Public Library, said she was impressed with the film, noting she thought it fascinating to see many topics touched upon in such a short amount of time — all with the inclusion of singing and dancing.

After screening the film, Colman-McGaw said that teens are asked a series of questions in order to discuss the issues conveyed in the film.

“Young people are so much more engaged in conversations than I think they get a lot of credit for a lot of the time,” Colman-McGaw said. “This is just one more way for them to really talk about the issues of police brutality, complications in the justice system, and stuff like that.”

For many teens, some of the things “Streetwrite” addresses might hit home, Colman-McGaw said, and libraries are there for teens to grasp the complexities of what they might experience in their own lives.

“It gives a lot of people an entry point to talk about things, whether they’re really well-versed in it, or it’s their first time talking about it,” she said.

Baker is proud of the critical acclaim “Streetwrite” has received and its exposure to teens at local library branches. But most of all, seeing her students learn to politically engage in their beliefs made it all worth it.

“This for me made it something really special because of the way that the students responded to this was amazing,” she said. “There’s not that many great projects that you get to work on or projects that you can really believe in (that) you see will have a chance to make people aware of things. I think they got to have that experience, which is really nice.”