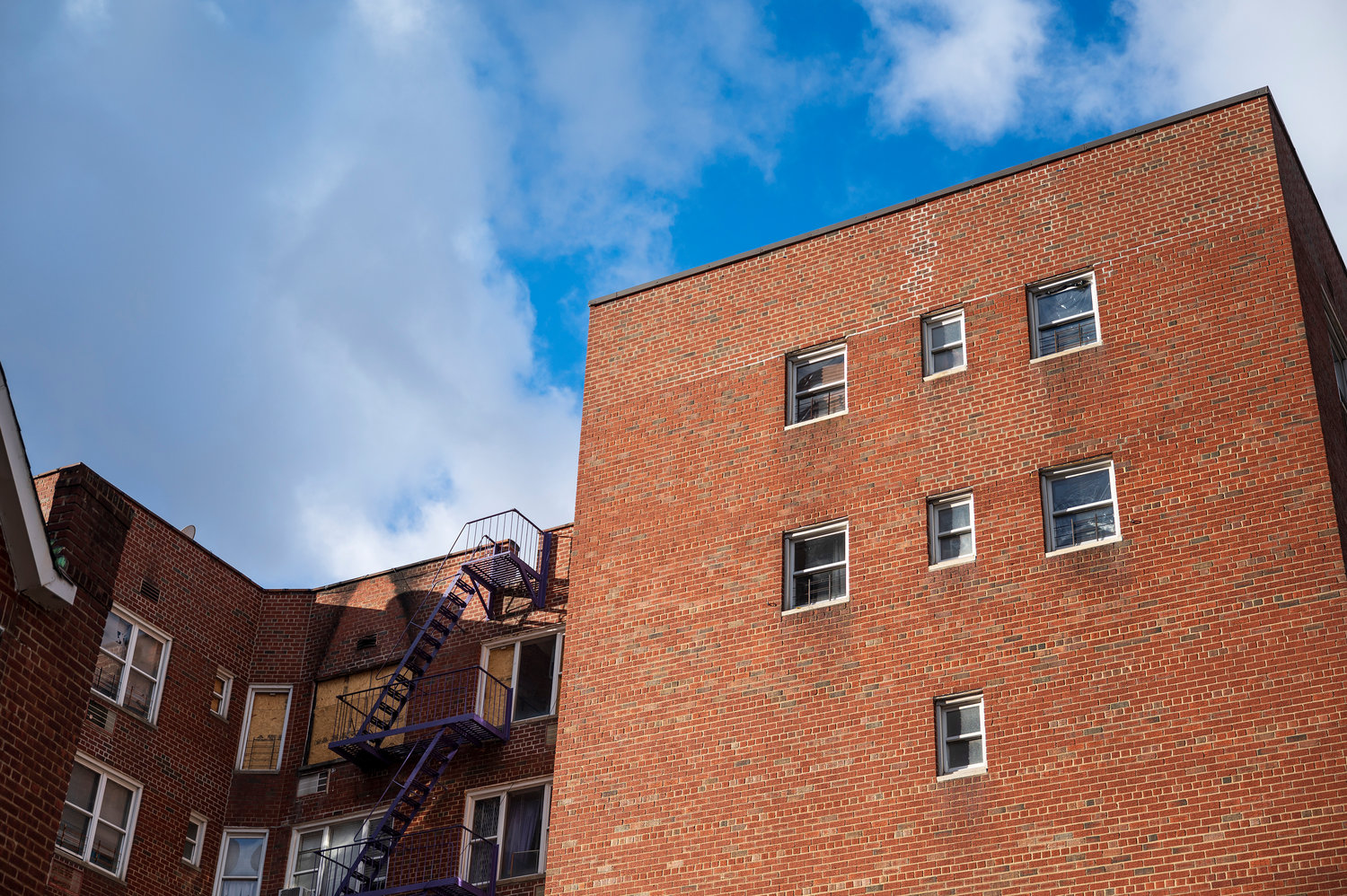 Apartments on the top two floors of 130 Van Cortlandt Ave. W., were heavily damaged in a three-alarm blaze earlier this month. Eight people — including three firefighters — were treated at a nearby hospital. Some tenants have since been forced out of their apartments, since the fire, by order of the city until structural repairs can be made.
HIRAM ALEJANDRO DURÃN 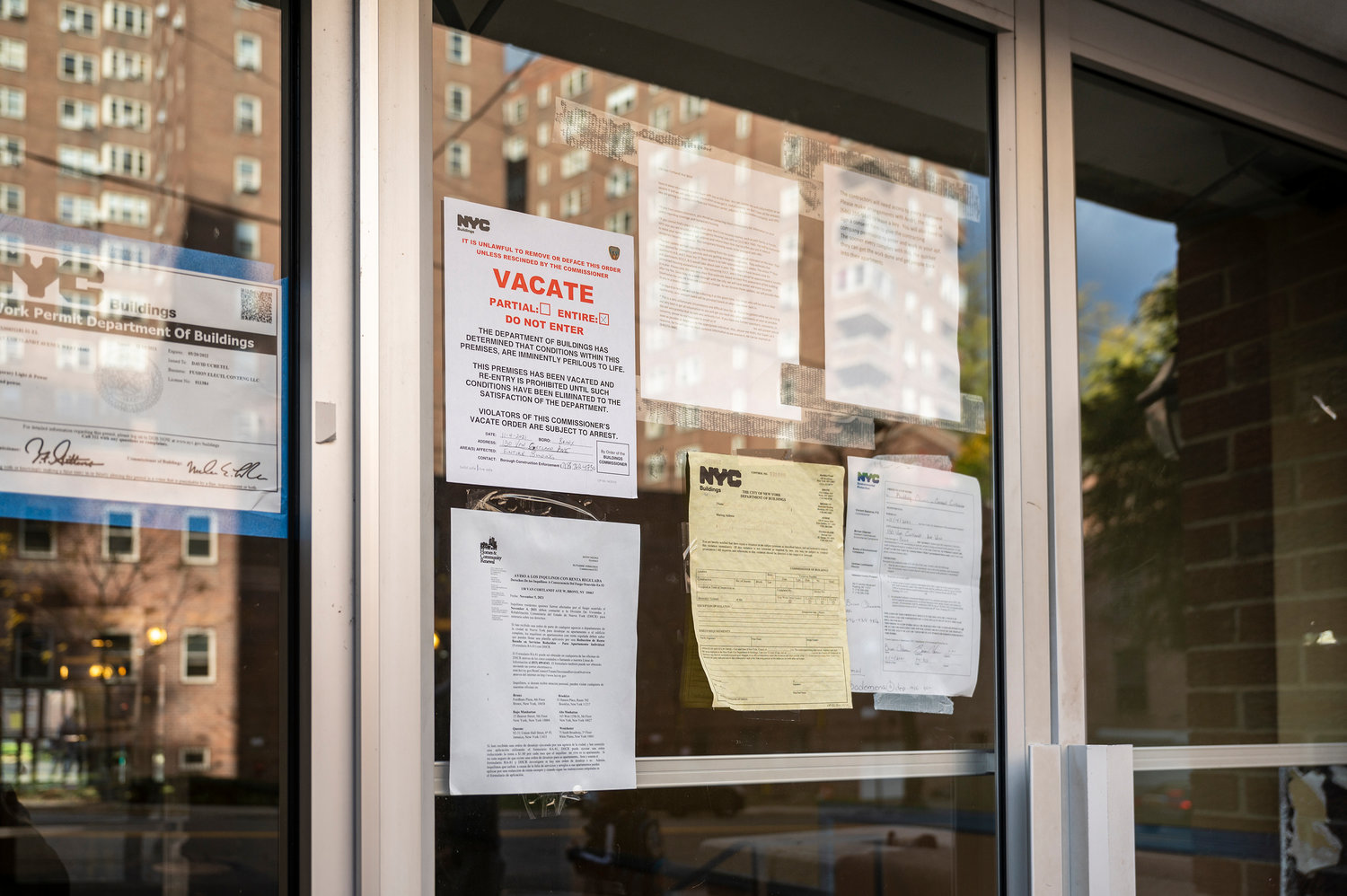 The city’s buildings department has ordered parts of 130 Van Cortlandt Ave. W., vacated after a three-alarm fire heavily damaged the top two floors of the residential building earlier this month. That could mean for some tenants, there will be no place to stay during the holidays while they await structural repairs.
HIRAM ALEJANDRO DURÁN 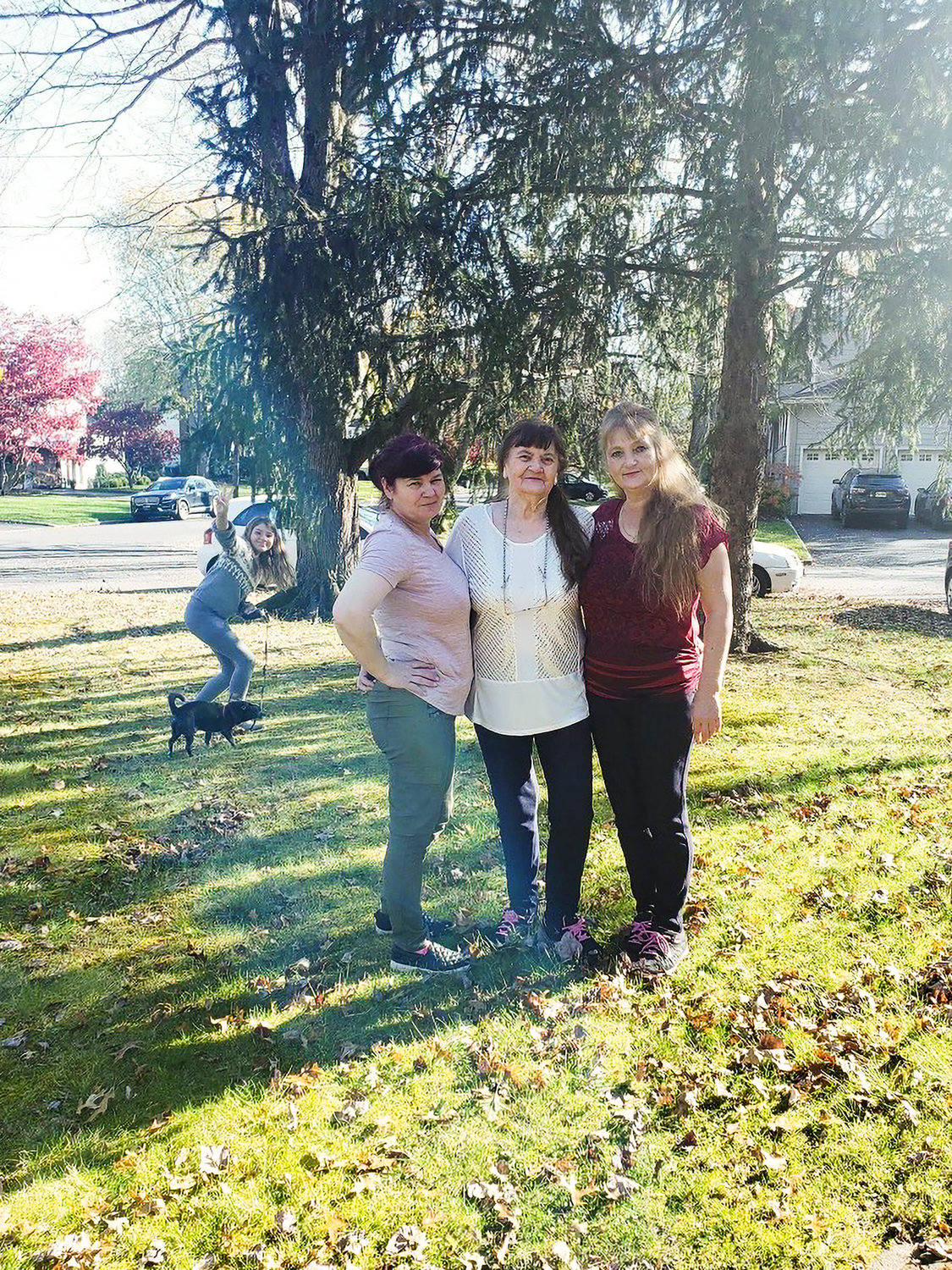 Anna Kustka, center, died during a two-alarm blaze that heavily damaged her apartment building at 181 W. 238th St., in September while her daughter Daniela Mayer was hospitalized. It was the start of what would become three major fires in that part of Kingsbridge off Bailey Avenue, including a four-alarm fire that gutted several businesses across the street in October, and a three-alarm fire at 130 Van Cortlandt Ave W., earlier this month.
Courtesy of Ivana Lakata
Previous Next
Support journalism

It was supposed to be the most wonderful time of the year. But for some people like Jose Santillan, these holidays are expected to be anything but joyful.

Santillan and a number of his neighbors at 130 Van Cortlandt Ave. W., have been forced from their homes in the aftermath of a three-alarm fire that tore through the top of their seven-story building earlier this month.

“The timing of the fire is really bad,” Santillan said. “Soon it’s going to get really cold, and who knows when we’ll be back home.”

Santillan — like many of his neighbors — now wonder how long it will be until they can move back in.

“There’s nothing like being in your own home,” Santillan said. “I just hope they can get this fixed soon, because nobody wants to stay at anyone else’s house.”

Investigators with the New York Fire Department are blaming the blaze on electrical issues. And that’s become a bit of a common theme — especially in this neighborhood — which has had not only this fire in November, but a four-alarm blaze that gutted several storefront businesses on Bailey Avenue and West 238th Street last month, and a two-alarm blaze in September just across the street that destroyed several apartments, and killed Anna Kustka.

All three fires, while unrelated, were said to be electrical in nature.

The Van Cortlandt building, maintained by Ed-Bob Management Corp, received several violations recently after a preliminary investigation alleged the company illegally converted two units into five. While it’s unclear if that conversion was related to the fire in any way, three of the violations carry a fine of $70,000, while the remaining violation could cost the landlord as much as $12,500.

And there are issues with the elevator, Santillan said — something DOB also addressed several times between 2015 and 2019, mostly accusing the landlords of failing to keep the elevators within building code compliance.

Even after the fire, more violations started to rack up against Ed-Bob. The city’s environmental protection department ordered work to stop on an asbestos project which officials said violated local air pollution control laws.

Although DOB originally ordered all of the Van Cortlandt building to be vacated, the city agency reversed course, instead demanding just a partial evacuation after a review of the building’s roof integrity. The fire re courtesportedly damaged more than half of it.

Five tenants sustained minor injuries in the Nov. 4 blaze, while three firefighters were treated for non-life-threatening injuries of their own at a local hospital.

No one died at Van Cortlandt, but some who knew Anna Kustka — like granddaughter Ivana Lakata — are still mourning her loss at 181 W. 238th St. Lakata’s aunt, Daniela Mayer, was hospitalized after the fire as well.

Lakata remembers her grandmother as a vibrant and energetic woman, whose health was excellent.

“My grandmother was always the life of the party whenever we had family gatherings,” Lakata said. “She loved to sing and dance.”

Kustka immigrated with Mayer from Czechoslovakia in 1992, and was someone who neighbors always remembered as being friendly to everyone she came across. That’s no surprise to Lakata, who said Kustka was always a charitable woman.

“My grandmother always helped others — not just family and friends, but strangers as well,” Lakata said. “She would save her money and buy plane tickets for others to come to America from Slovakia.”

Kustka was also a social butterfly who often loved to be adorned by those closest to her.

“She loved to hear compliments about how beautiful she was or how young she looked compared to her actual age,” Lakata said. “It was always guaranteed to make her smile.”

Kustka is survived by her three children and 10 grandchildren.

The fire department deemed that fire accidental despite how electrical cords were used in the apartment. But officials also noted there were no smoke alarms in Kustka’s apartment.

Lakata said her family complained to the landlord about several issues during Kustka’s time there — including plumbing issues, as well as a kitchen cabinet and a light fixture in the hallway, both of which reportedly fell on Mayer.

“Most of my aunt’s complaints went ignored by the landlord,” Lakata said. “And it wasn’t just my aunt who would call the office to complain. Sometimes it was my sister or my cousin who would complain to get things repaired.”

Lided Reyes lived directly above Kustka, and has lived in a shelter since the fire.

“I have not been offered any other apartment to stay in by the landlord,” Reyes said. “I’m still waiting to hear back from him.”

The landlord — Kujtim Realty Corp. — did not respond to a request for comment, but in an email to Reyes several days after the fire, they predicted it could take up to a year before Reyes and his family can return.

“I have myself, my mother, sister and my niece who are all still living with some pretty rough conditions at the shelter,” Reyes said. “My niece is falling asleep in class because she finds it hard to get sleep in the shelter we’re staying in.

“It is very rough living in this shelter, especially during the holidays. No one wants to be stuck here with their family. It’s very difficult.”

Just across the street, five businesses on the corner of Bailey and West 238th were heavily damaged or destroyed just a few weeks later.

Just this past week, one of those affected businesses — Best Laundry — has since reopened.

However, other businesses like Tililá Casa Publica and Cocina — which employs more than 20 people — remains closed, and will continue to stay shuttered through the holidays. The same is true for Con Sabor Latino restaurant, Bailey Deli & Grocery and Yeung Hing Restaurant.

“The timing of all of these fires happening is really crazy,” Reyes said. “We need to really (upgrade) a lot of these buildings so that this can stop happening in our neighborhood.”