First to get COVID vaccine makes it clear: 'I like living' 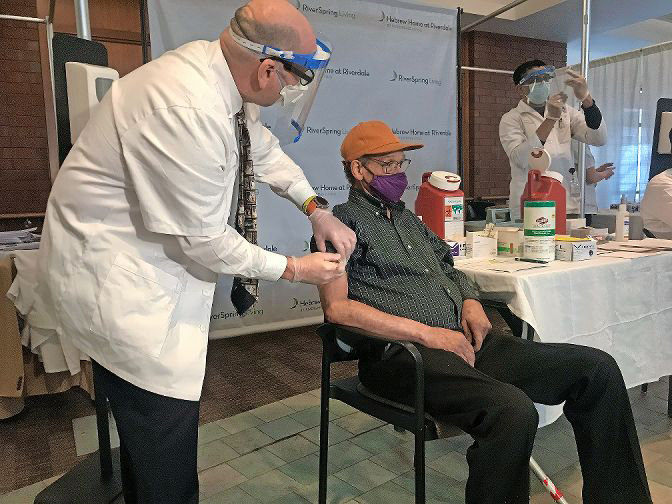 Kelley Dixon, 78, gets the first coronavirus vaccine among residents of the Hebrew Home at Riverdale on Monday morning. Walgreens pharmacists like Mitchel Zaretsky, left, and Ankur Amin administered inoculations to nearly 1,600 people at the Hebrew Home over the course of three days.
MICHAEL HINMAN 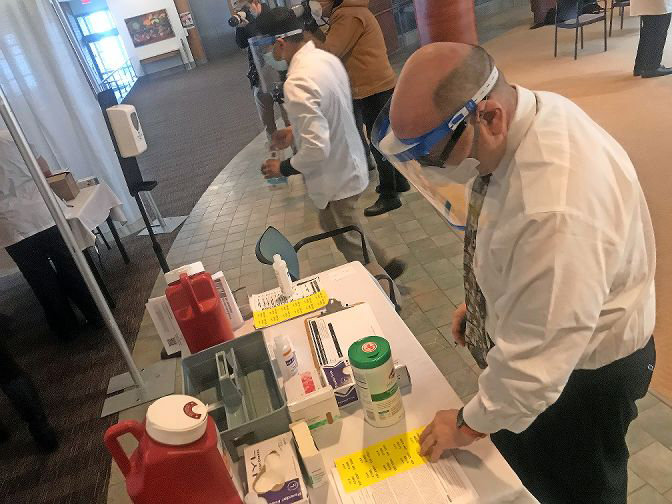 Walgreens pharmacist Mitchel Zaretsky checks his supplies before getting inoculations under way, protecting from the coronavirus residents and staff workers alike at the Hebrew Home at Riverdale on Monday.
MICHAEL HINMAN 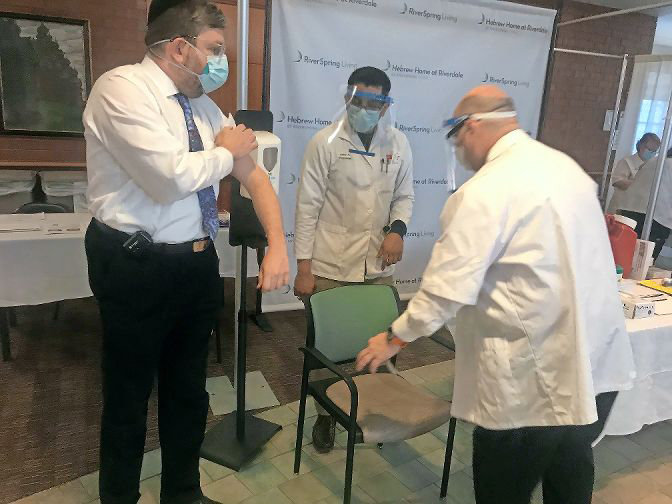 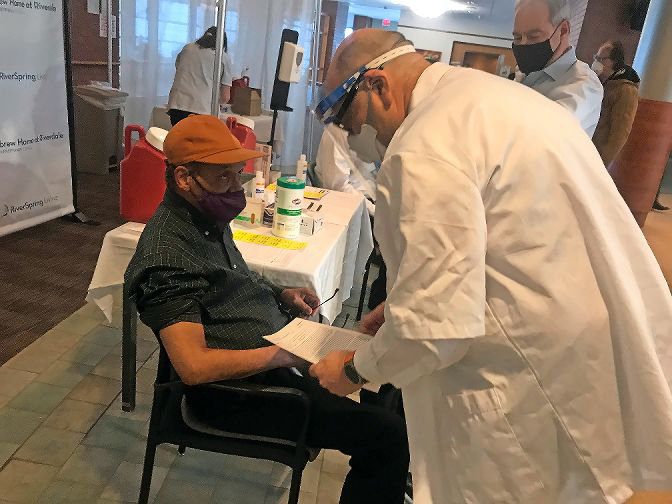 Kelley Dixon, who volunteered to be the first Hebrew Home at Riverdale resident to receive the coronavirus vaccine on Monday, goes through a pre-shot checklist with Walgreens pharmacist Mitchel Zaretsky.
MICHAEL HINMAN
Previous Next
By MICHAEL HINMAN

Kelley Dixon could barely keep his loose-fitting mask on his face as he sat down in a chair in front of a man holding a syringe.

That man was Walgreens pharmacist Mitchel Zaretsky, and inside his syringe was a small amount of fluid that could be the key to the 78-year-old Hebrew Home at Riverdale resident s someday ditching his face mask: the coronavirus vaccine.

“Are you ready?” Zaretsky asked.

“Go for it,” Dixon responded with obvious confidence.

It’s no longer the end of the beginning, as it had been for months dealing with the coronavirus pandemic. For Daniel Reingold, this is now the beginning of the end.

Dixon was the first Hebrew Home resident to receive the coronavirus vaccine Monday morning, kicking off what was expected to be a three-day process inoculating all 600 of his fellow residents, and most of the 1,000 staff members at the Hebrew Home.

“What I’ve said to people is that there were a lot of really, really bad parts of the early spring,” said Reingold, president and chief executive of RiverSpring Health — the Hebrew Home’s parent organization. “But I think the most dreadful part was that as bad as things were, we didn’t know when it was going to end. It was a sense of endless darkness.”

That changed in early November when Pfizer became the first pharmaceutical company to announce it had a vaccine ready to go.

“It’s literally been within the last several weeks, since the word came out that this is coming, that I have felt a glimmer of hope and happiness and optimism,” Reingold said. “We’re not out of the woods yet, but at least this is a beginning.”

Walgreens was one of two national drug store chains enlisted to distribute the vaccine, and is in charge of administering shots at the Hebrew Home. Storing the vaccine requires freezers that can reach up to 112 degrees below zero Fahrenheit, according to the Centers for Disease Control and Prevention. A standard household freezer is typically set up for 20 degrees below zero — if not at zero — which means the coronavirus vaccine must be kept at a temperature not felt anywhere on the planet except at its southernmost pole.

Walgreens administered vaccine shots over the next three days to every Hebrew Home resident, and most of the paid staff workers, with priority given to those who work the frontlines, according to Dr. Zachary Palace, the Hebrew Home’s medical director.

Walgreens will return in three weeks to not only give second doses to all the residents, but first doses to those who were missed the first time. They will then return one last time at the beginning of February to provide any final shots.

That should mean, come Valentine’s Day, nursing homes like the Hebrew Home will effectively be immune from the pandemic. But that doesn’t automatically mean life will return to normal.

“Irrespective of the vaccine, we still will continue practicing all of our infection control practices,” Palace said. That means everyone will still wear masks. There still will be frequent hand washing. There will be no communal dining. And social distancing will remain paramount.

“The jury’s still out on whether individuals who are vaccinated can’t still get infected and become carriers,” Palace said. “That’s why we’ll have to maintain all those practices. At least for now.”

While the vaccine is being welcomed across the home, there’s no place where it’s needed more than in Hebrew Home’s dementia unit, the doctor said.

“Our population is so vulnerable and so at risk, but the subgroup that is at the highest risk are those who have cognitive impairment,” Palace said. “They are unable to comprehend social distancing, and maintain the mask on their face. We consider them to be the highest risk, and that is the population we are really targeting the most.”

Dixon described his inoculation as painless. In fact, he said he didn’t even realize Zaretsky already had jabbed him — but was quite excited to get the vaccine.

“That’s the whole purpose of them,” he said. “You live longer, and you’re safer.”

The vaccine may be new to Hebrew Home and other surrounding nursing homes, but it’s been trickling into other major health care facilities as early as last week. NYC Health+Hospitals, for instance, began vaccinations in its Elmhurst, Queens, facility on Dec. 16.

Still, producing and administering the vaccine is going to take time, public health officials warn. That means the country may not see some semblance of pre-pandemic normalcy until the end of next summer, at the earliest.

“This is probably the single biggest logistical mobilization that the United States has done since D-Day,” Reingold said. “There probably will be glitches, and we need to be patient. We need to be flexible.”

But at least for now, after months upon months of despair, Reingold wants to just sit in this moment of positivity. Emotional positivity, that is.

“It’s a reminder about the wisdom of aging, and the resilience of aging. And that’s been a very refreshing and reassuring reaction.”

But sometimes, “you got to do it,” Dixon said.

“I wasn’t worried about (the pandemic), but I was very conscious about it. I did all the protocol, because you know, I like living.”