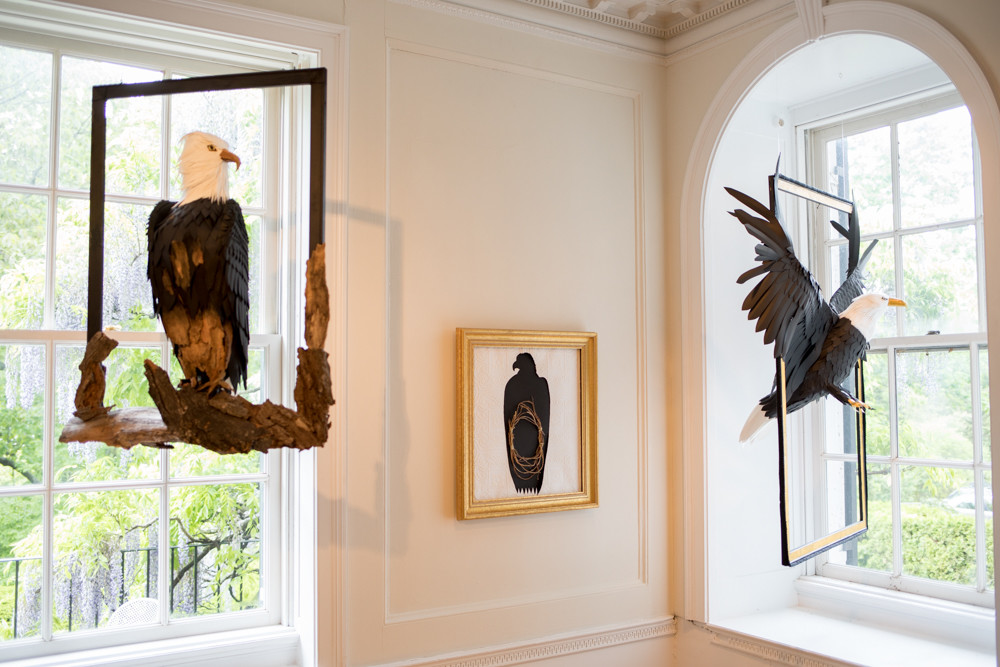 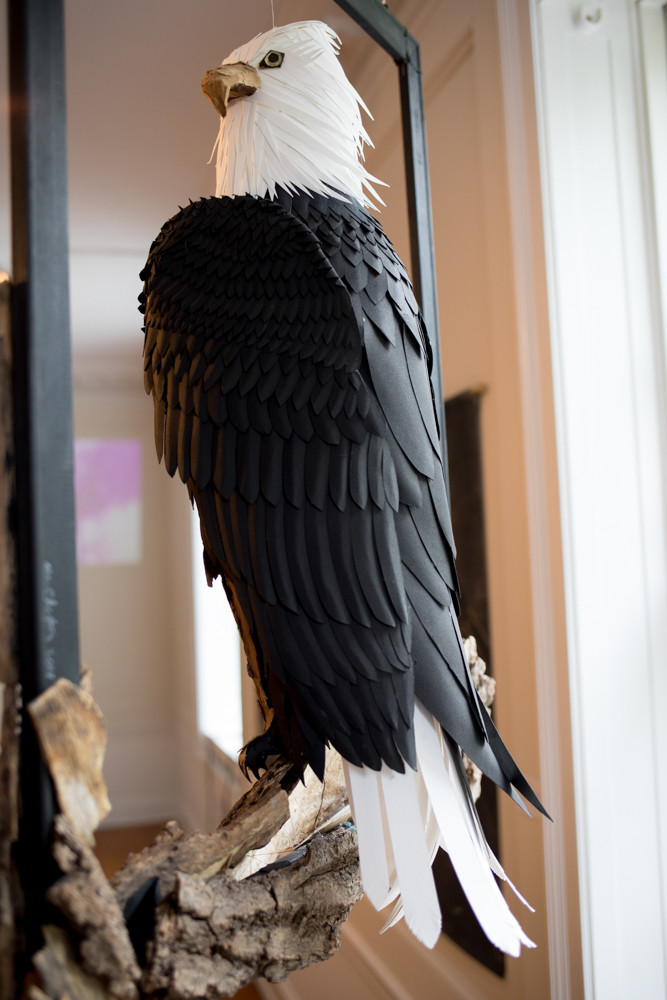 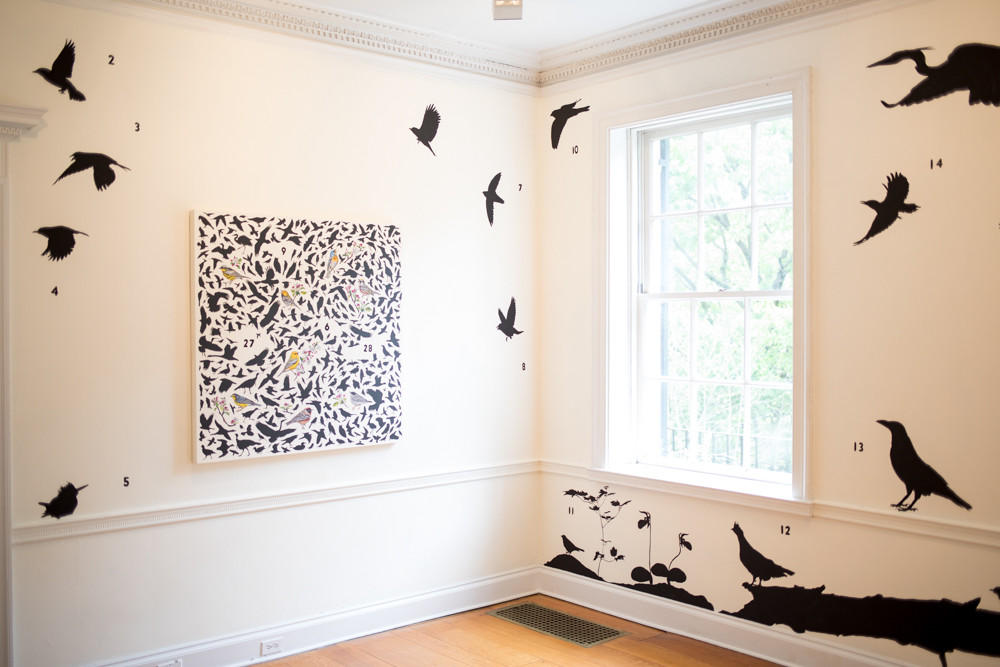 James Prosek created the installation ‘Spring at Wave Hill’ specifically for the gallery’s new exhibition. He gave each bird a number, but heightened the mystery by not providing a key.
JULIUS CONSTANTINE MOTAL 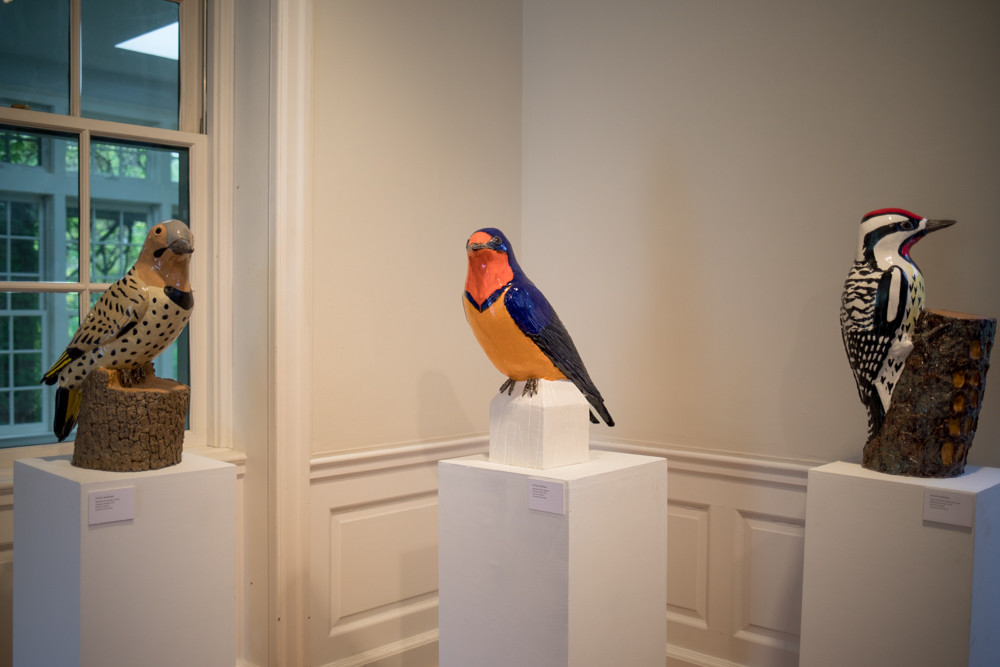 Several sculptures by bird watcher Peter Morgan are on view, above. He has been sculpting birds since 2012.
JULIUS CONSTANTINE MOTAL 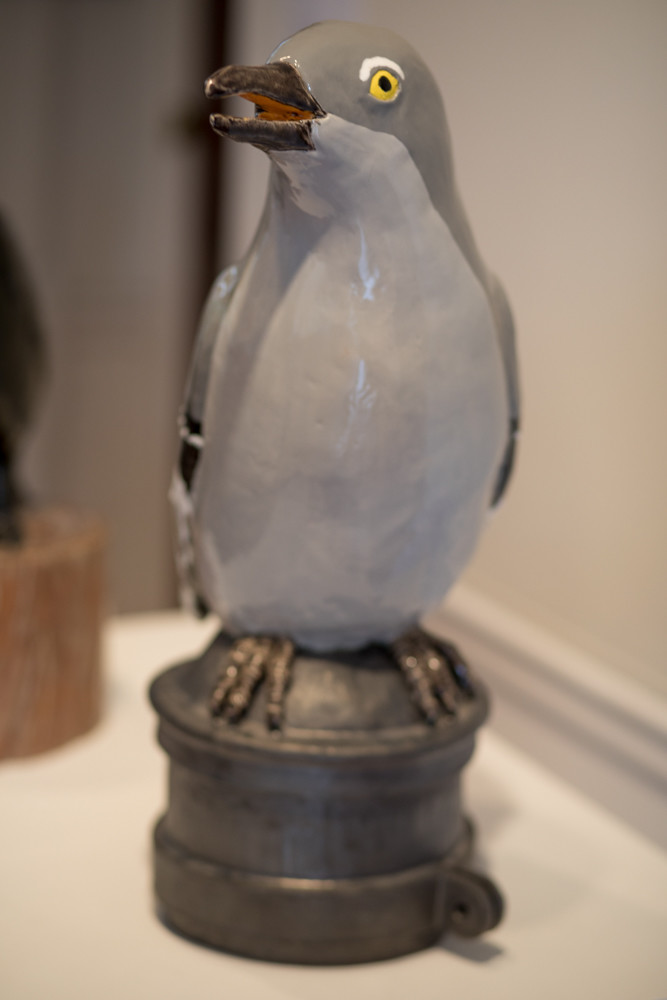 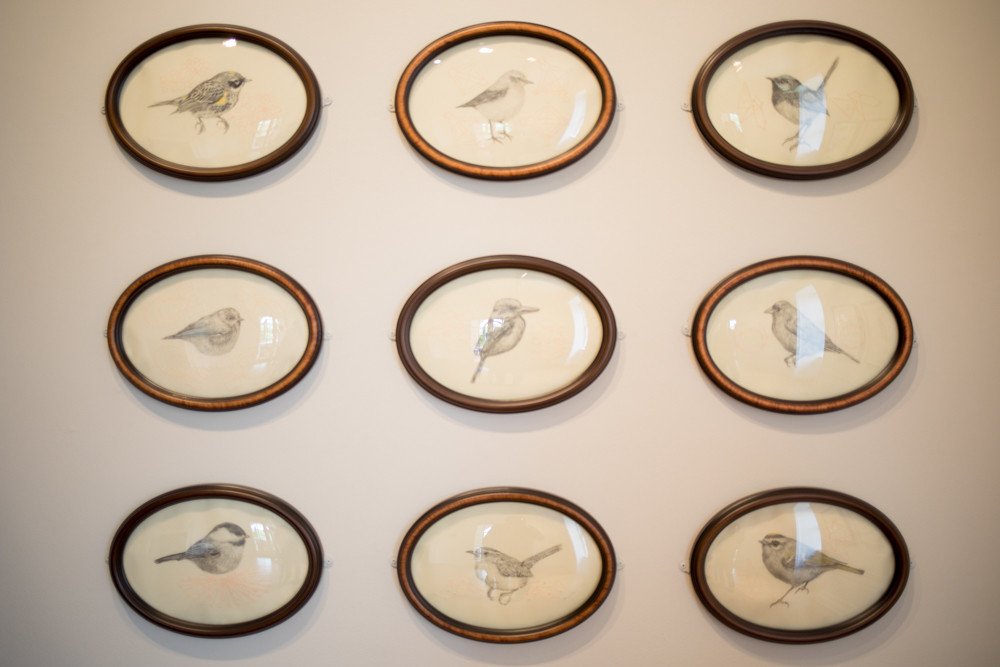 Tanya Chaly's drawings of birds evoke 19th-century images of the natural aviators. Her work is on view in Wave Hill's new exhibition, 'Avifauna: Birds + Habitat.'
JULIUS CONSTANTINE MOTAL
Previous Next
If you go ...

With birds flying in and out of Wave Hill daily, it’s no surprise they’ve landed a new place to temporarily call home — Glyndor Gallery.

“Avifauna: Birds + Habitat” is the newest exhibition at Wave Hill’s gallery, celebrating and exploring birds and how they interact with their habitats. The show features 11 contemporary artists using various media, from digital painting to film, to do a deep dive into the world of birds.

It’s on display through June 24.

“Birds are an important part of the experience of Wave Hill,” said Martha Gellens, the public garden’s spokeswoman.

During the year, Wave Hill hosts monthly bird walks where people can catch a glimpse of at least one of the 120 species inhabiting the Hudson River and the garden. Last fall, it also hosted “Wings Over Wave Hill,” where visitors were able to get a closer look at owls, falcons and hawks.

Chester’s work takes a look at the difference between what a natural habitat looks like versus migration, something she demonstrates by placing one bald eagle looking away from one of Glyndor Gallery’s windows, and the other facing another window.

Placement of an artist’s work is always a team effort between the artist and the gallery team, according to Eileen Jeng Lynch, Glyndor Gallery’s curator.

“We generally give them an idea (of) where their work will be,” she said, “and then they have room to play with how they actually want it installed.”

Others artists, like Jenna Spevack and Jeff Mertz, took more of an interdisciplinary approach to their bird work. Spevack’s “Wind on the Wing” uses the 12 pinwheels installed outside of Glyndor Gallery to provide audio of commonly heard Bronx birds.

“The speed of the wind actually determines what image you see in the projection,” Lynch said.

Meanwhile, Mertz uses the power of film in his piece, “In Your Land,” to produce close-ups of different birds around New York City, taking a look at the relationship between them and their surroundings. A musical score composed specifically for “In Your Land” accompanies the visuals.

An app for that

On the side of the installation, Wave Hill visitors can also use an iPad app that allows them to learn more about each bird species featured.

The additional touches of Spevack and Mertz’s works helps heighten the experience for people who want to familiarize themselves with different bird species, Lynch said.

“I think it adds an interactive component for people,” she said. “They can put on the headphones to listen” to the bird audio, and “find out more information at their own pace.”

It’s taught Lynch a lot, too. Since putting the exhibit together, she’s learned quite a bit more about different bird species.

“Even listening to different songs, I’m starting to pick up which bird is” which, Lynch said.

The exhibit has been a way to get a realistic look at appreciating birds, Gellens said, but also realizing the effects global warming has on their habitats.

“When I walk through the show, I experience a range of emotions,” she said. “There’s a source of great beauty, there’s a lot of humor, there’s a poignancy because you learn just what risk we’re putting them at, and a greater appreciation for the ecology of our landscapes, which attracts so many birds.”

Since the exhibition’s opening April 7, Lynch said the show has attracted a number of visitors, particularly those who really, really like (and study) birds.

“There are a lot of enthusiasts around here,” she said. “So for them to come in from outside and see these artworks in the show has been a really positive response.”

The exhibition, Gellens added, also is an opportunity for children to get interested in birds.

“It’s great to have a show where they can come in and be fascinated and amused by what they find,” she said.

With almost a month left before “‘Avifauna: Birds + Habitat” closes, Lynch wants visitors to know that an entire education on birds is waiting for them in each room of Glyndor Gallery.

“I hope that they’ll learn more about birds and their habitats and how many different species are out there actually inhabiting around there, and how human behaviors in the environment have affected birds as well,” Lynch said. “There are various lessons to (be) learned within each door.”