Flower shop among many businesses fighting to blossom

Some storefronts remain closed despite being deemed essential, fearing a post-pandemic future 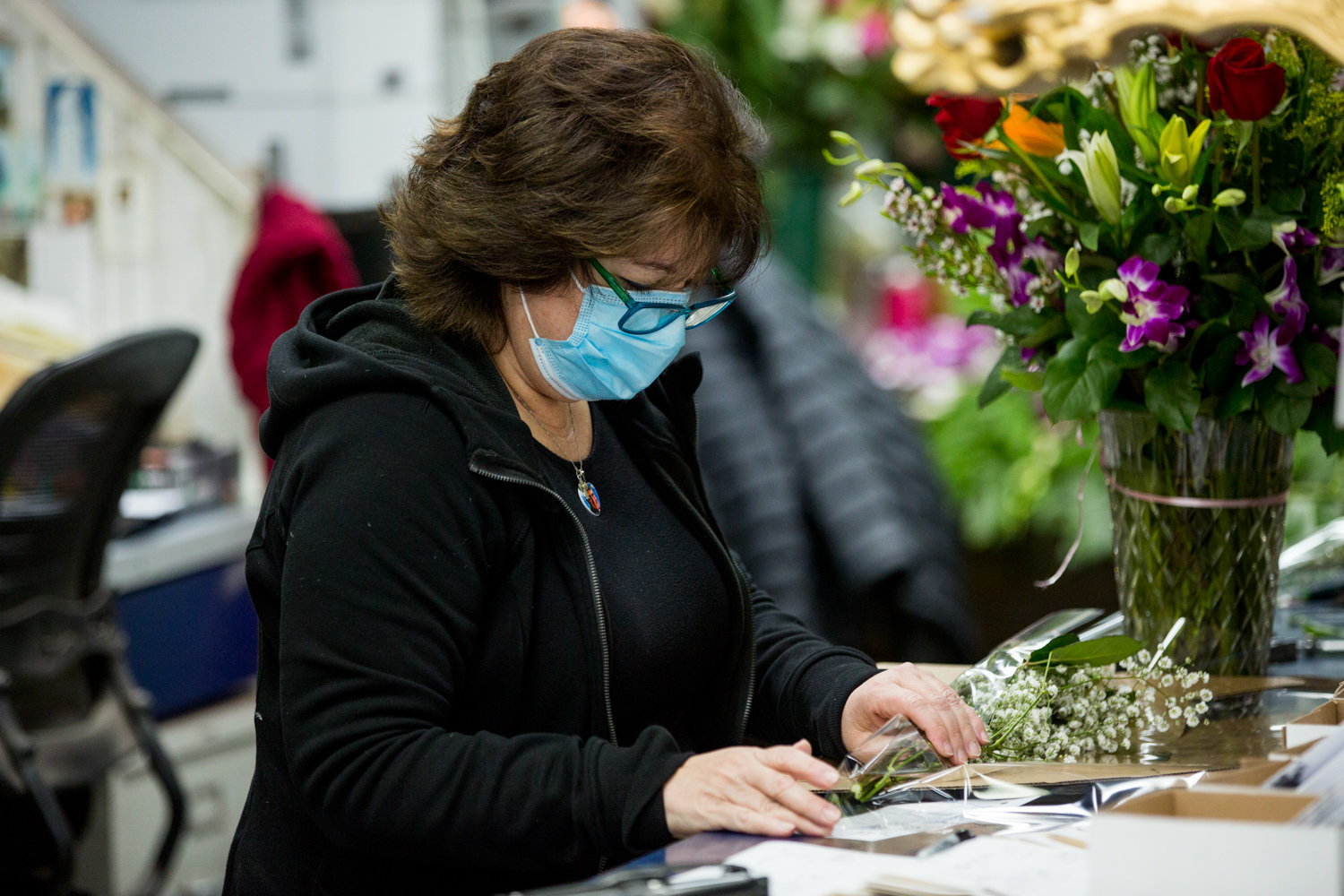 Columbia Florist co-owner Katherine Capsis prepares an order for a customer two days ahead of Mother’s Day. The West 231st Street flower shop has managed to stay open even though many of its neighbors closed temporarily in the wake of the coronavirus pandemic.
JULIUS CONSTANTINE MOTAL 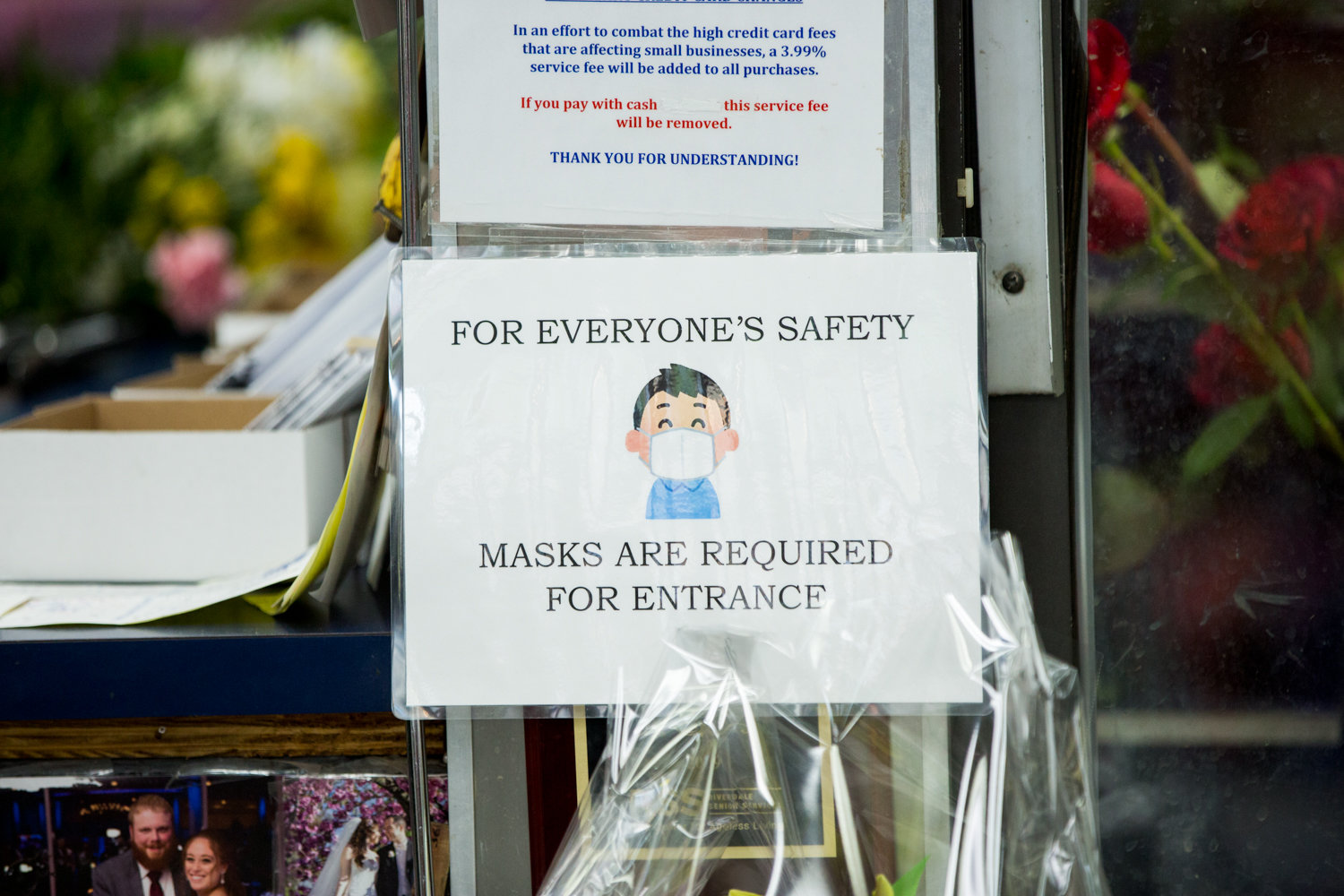 A sign inside Columbia Florist informs customers they must wear a mask when inside the store, especially on busy days leading up to special occasions like Mother’s Day.
JULIUS CONSTANTINE MOTAL 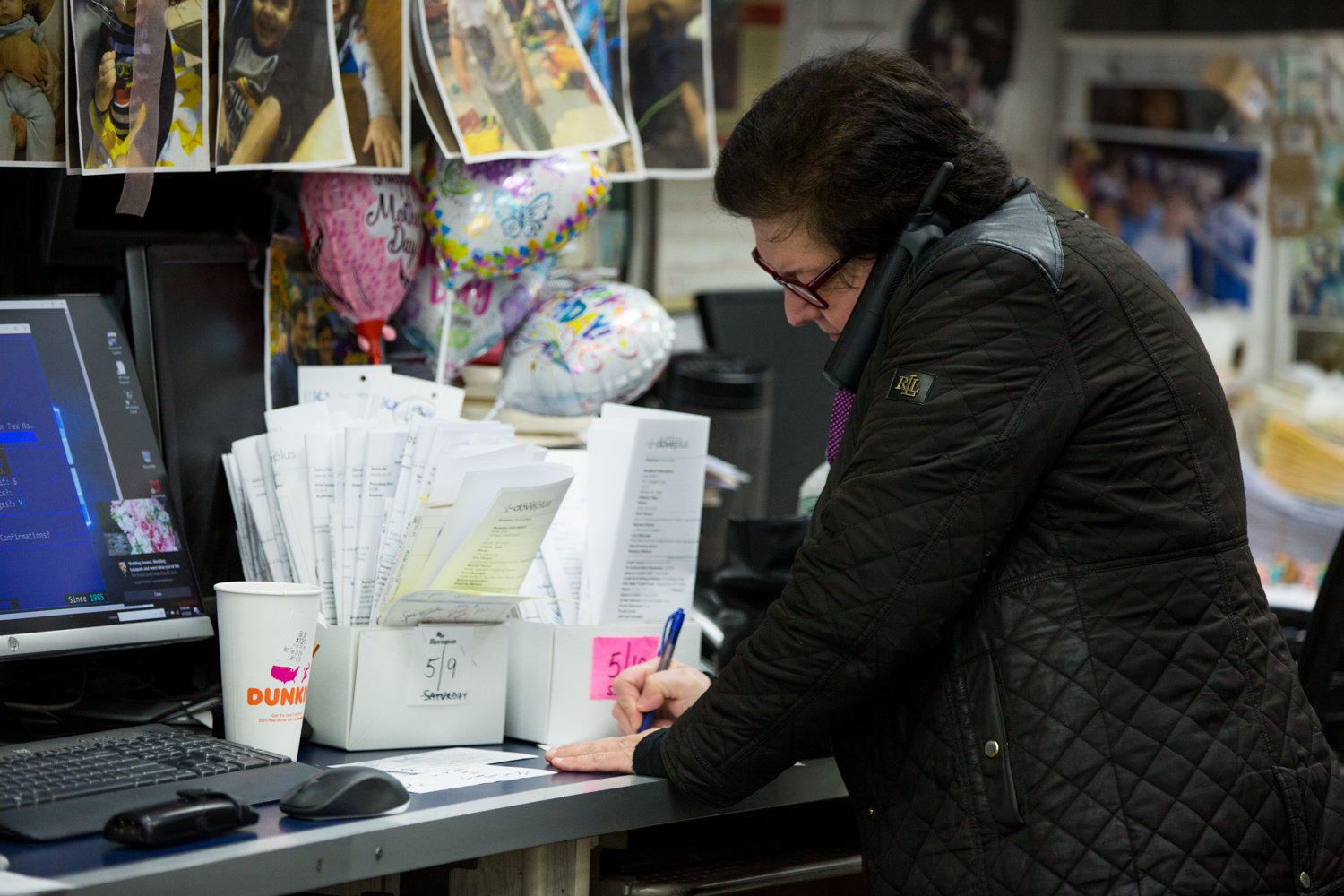 Columbia Florist co-owner Connie Dennis takes a customer’s order over the phone in the days leading up to Mother’s Day. The Kingsbridge floral mainstay has managed to stay open despite the statewide coronavirus shutdown.
JULIUS CONSTANTINE MOTAL 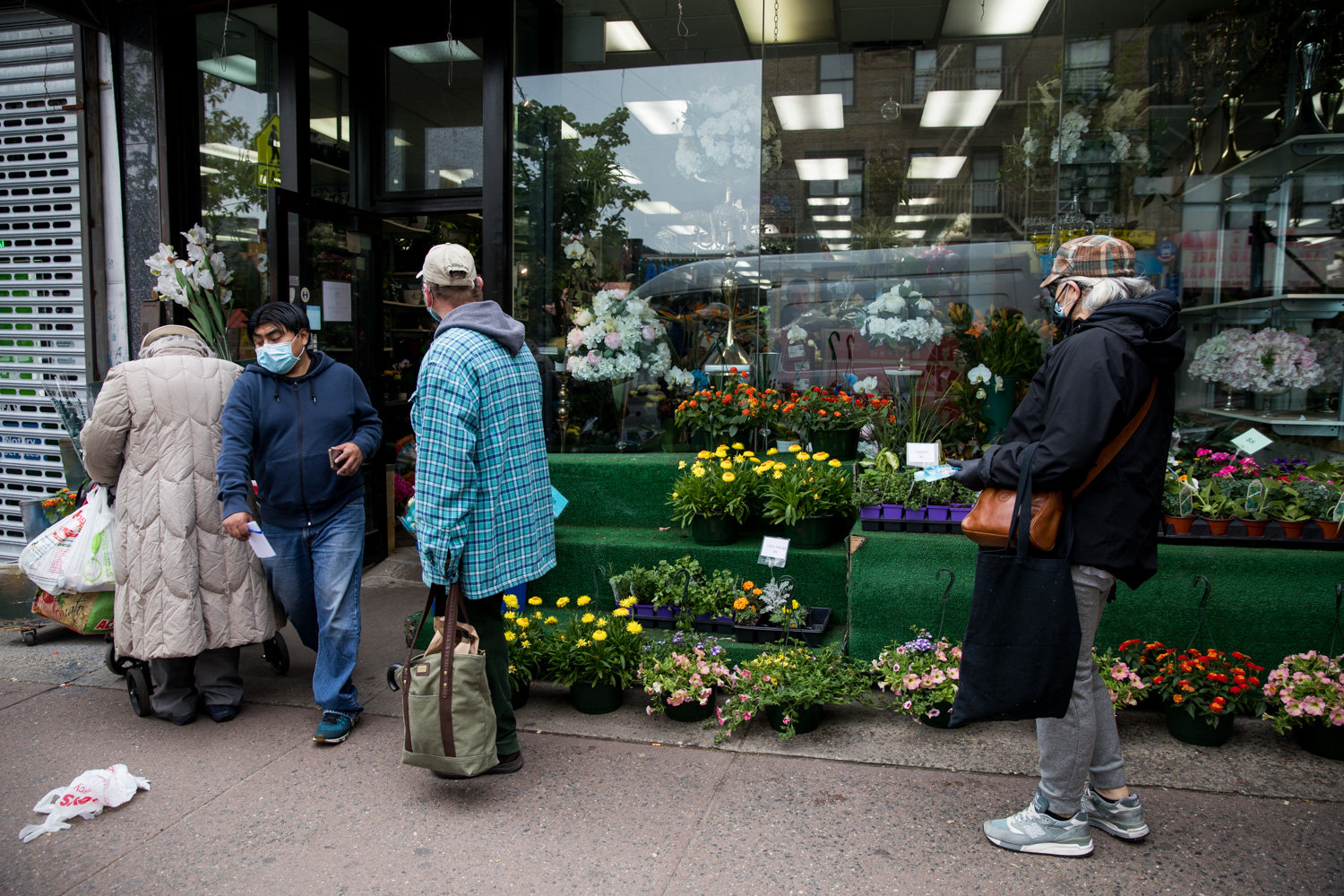 Customers line up along West 231st Street to wait — making an effort to maintain six feet of distance — to get a few minutes inside Columbia Florist just before Mother’s Day.
JULIUS CONSTANTINE MOTAL 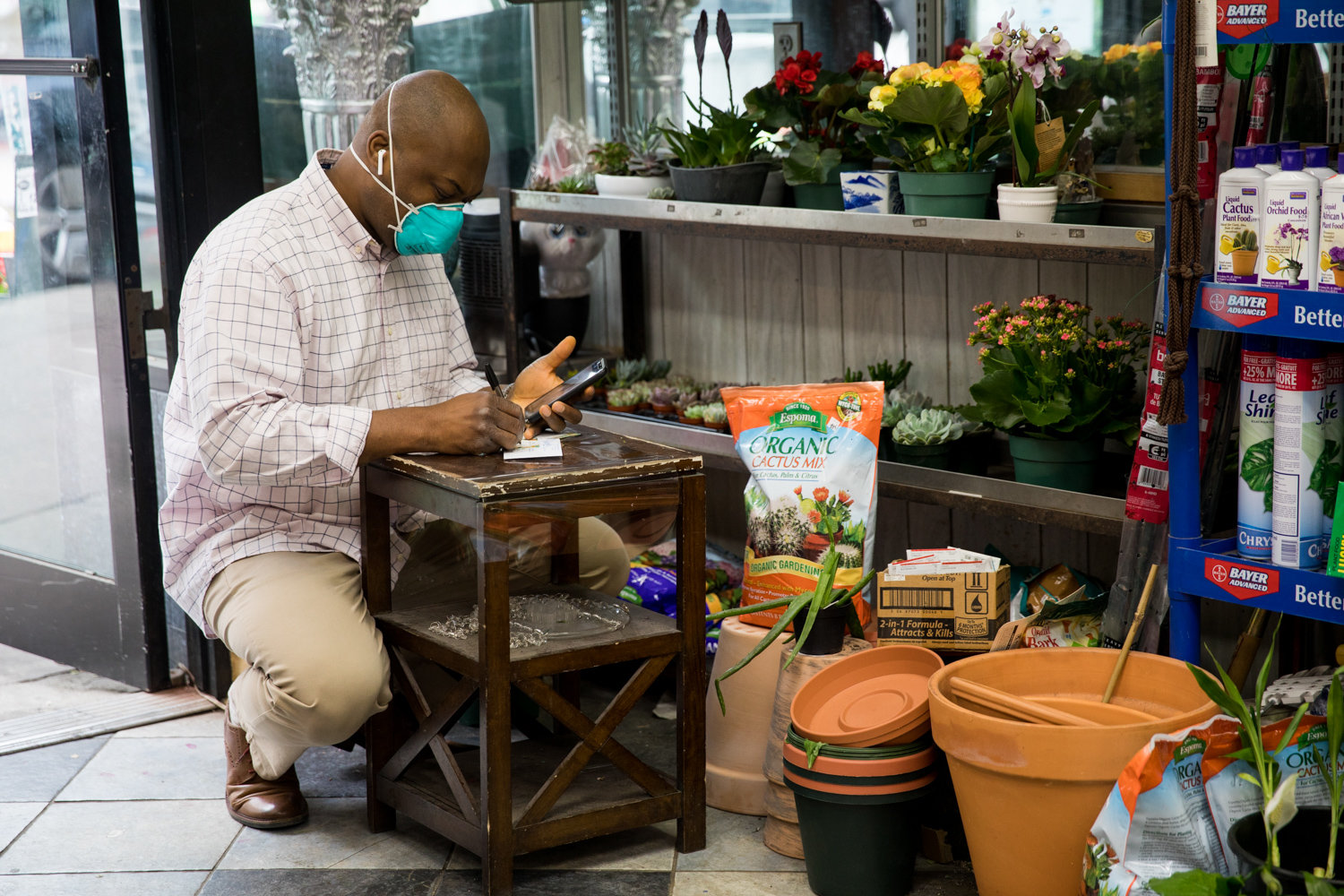 A customer fills out an order slip inside Columbia Florist, which has managed to stay open despite the statewide coronavirus shutdown.
JULIUS CONSTANTINE MOTAL 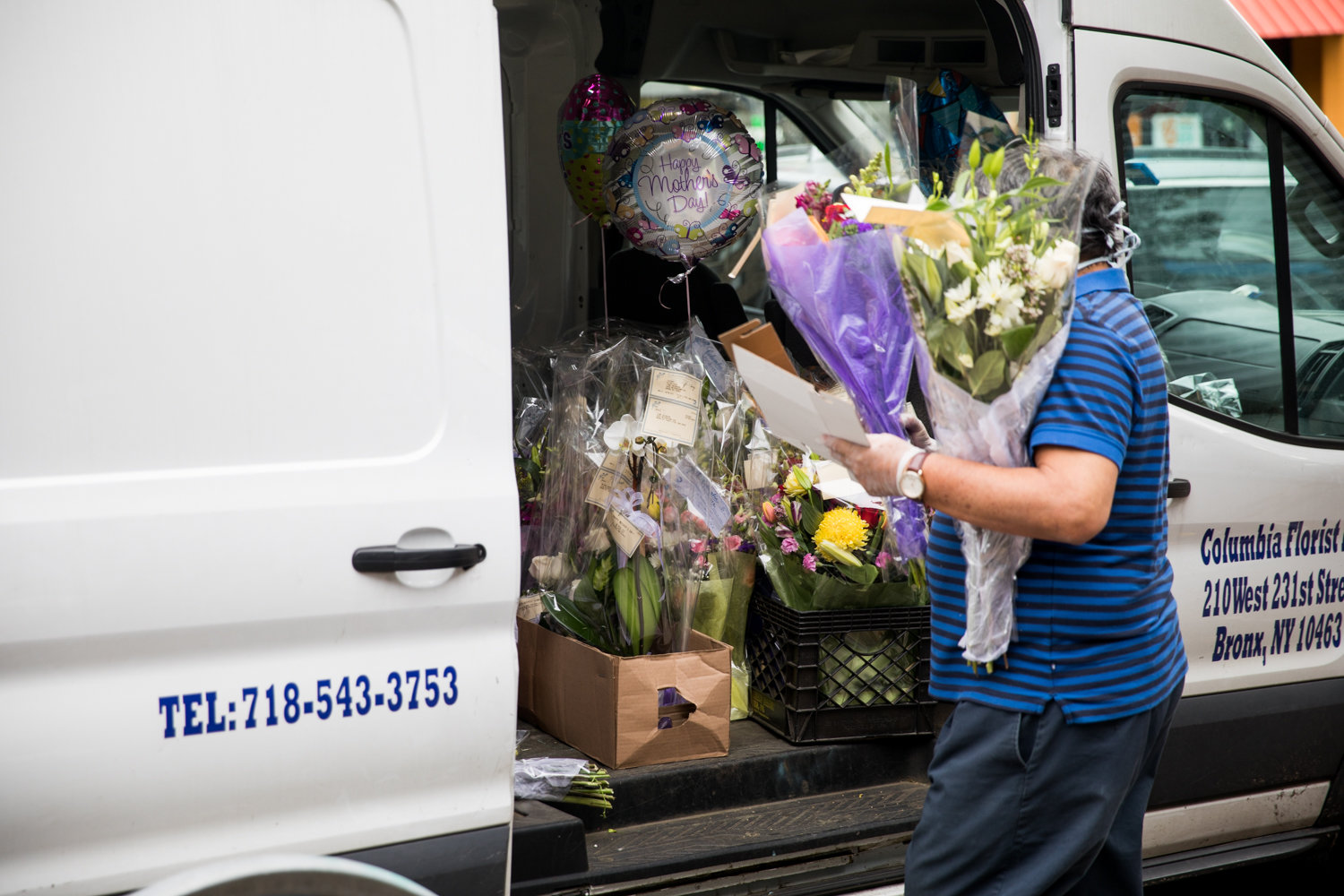 A worker carries an order of flowers to a van from Columbia Florist two days before Mother’s Day.
JULIUS CONSTANTINE MOTAL 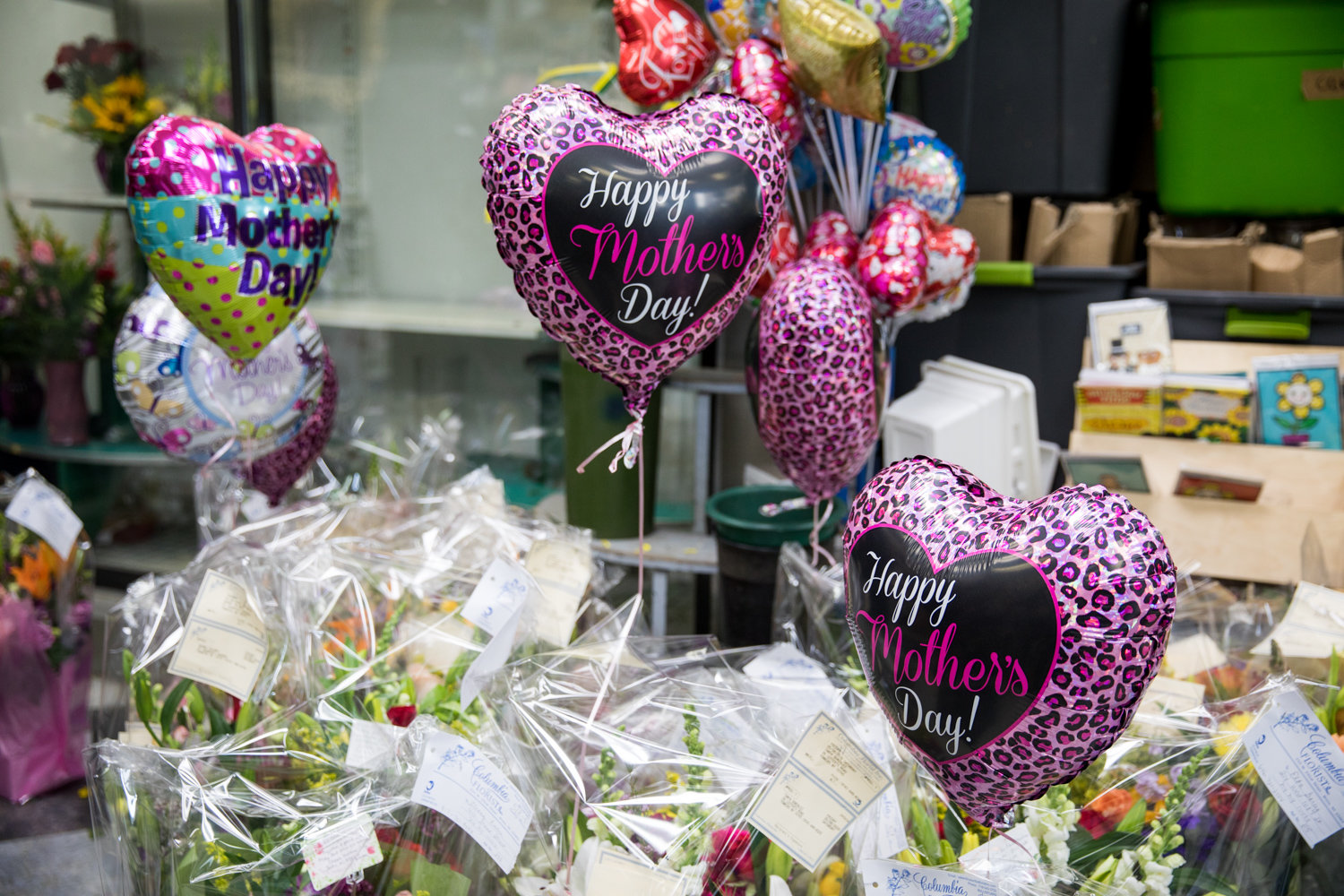 Mother’s Day is an important holiday, allowing people from all walks of life to demonstrate their love and gratitude for the maternal figures in their lives.

Flowers typically are a well-received gift for a mother as a way to communicate appreciation. But then again, these aren’t typical times.

With a Mother’s Day brunch sitting down at a sidewalk café completely out of the question, many sons and daughters were forced to look for celebration alternatives. Especially since flower shops aren’t exactly considered an “essential” business under Gov. Andrew Cuomo’s statewide coronavirus shutdown.

But that’s not stopping Columbia Florist, which has been perched near the corner of West 231st Street and Broadway for more than 60 years. For at least half that time, the shop’s been helmed by Connie Dennis, who co-owns the business with her sister.

The state might say florists are non-essential, but on holiday weekends like Mother’s Day, they couldn’t be more essential. Flowers are a great way to brighten someone’s day, Dennis said. And during times like this, it seems everyone’s day could be a little brighter.

“Sending a flower puts a smile on someone else’s face,” she said. It “tells them that you are thinking about them.”

While it’s not exactly business as usual for florists, recent orders for Columbia have included birthdays, anniversaries, and as greetings or sympathies to loved ones. Some customers have used flowers in place of their own physical presence, since social distancing has kept many family members apart.

Mother’s Day is usually a high earning holiday for florists like Columbia. These days, however, even that holiday competes with the funeral floral arrangements Dennis and her sister must craft. And for a business that stays away from the mourning aspects of the pandemic, Dennis finds more customers want deliveries, rather than stopping by themselves to pick up orders.

That has sent Columbia delivery drivers throughout New York City, as well as New Jersey, Westchester County and Connecticut.

Those are some tall orders, especially since social distancing requirements limits the number of workers allowed in the small shop.

“We cannot have many people working in the store, so it has been busier for us,” Dennis said. “Most of the time it has just been my sister, myself and one worker. I have even been taking deliveries out myself.”

Sales have dipped, but so have supplies in some cases. In late March, as many were trying to adjust to the “new normal,”  Columbia struggled to stock its flower inventory, both in quantity and variety. For example, one thing missing from the store’s offerings has been tulips. Fortunately, most flowers purchased from South America are still available, Dennis said.

Pricing hasn’t changed much, but delivery costs have increased since the shop is going without its regular delivery staff.

Flowers also are a crucial part of large events like weddings and baby showers. Yet, all events are now canceled or postponed. It’s unclear when they’ll return, but at least one customer found a creative way to repurpose her ordered flowers into a kind gesture.

The woman had put together a sizable order for a baby shower, but ended up hospitalized with the virus that causes COVID-19. Fortunately, she recovered, Dennis said. She was so thankful for her recovery, in fact, she sent the flowers intended for her shower instead to the nurses who took care of her.

Unfortunately, many small businesses aren’t having the same luck as Columbia, as the coronavirus shutdown languishes on. While many storefronts are shut because they’re deemed “non-essential,” those that can stay open operate at a reduced capacity.

The big question is whether many of the now-shuttered businesses will be able to reopen once New York City is allowed to open its doors again. Some businesses — even essential ones — are choosing to stay closed with hopes of being around long-term, said Christopher Rizzo, a board member of the Riverdale Main Streets Association.

“Some of these small businesses have such small profit margins to begin with,” Rizzo said. “So staying open when your revenues are cut in half does not make sense for a lot of businesses. They are choosing to stay closed so that they can stay open in the future.”

Dennis says she’s thankful Columbia Florist can stay open in some capacity. She receives many calls from customers thanking her for the flower deliveries, especially to funerals, where a lot of people aren’t present.

Says Dennis: “Having a flower there makes a big difference.”