For former Jasper lacrosse star, 9-11 ceremony is a painful honor 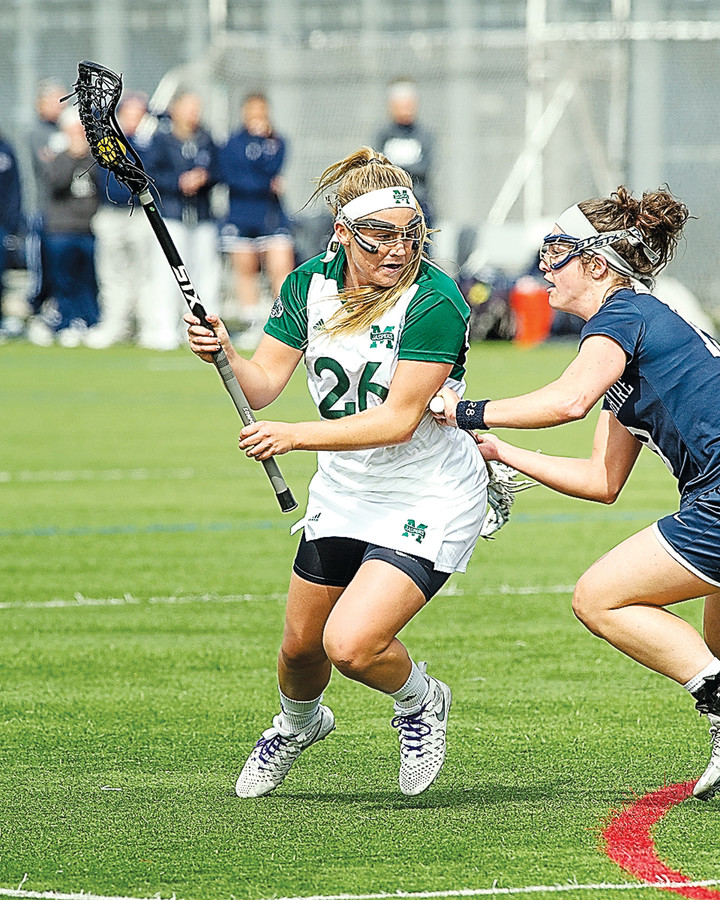 Kaitlyn Cunningham in action on the lacrosse field.
Courtesy of Manhattan College
By Sean Brennan

Kaitlyn Cunningham has only a few memories of that fateful September morning that changed the world 15 years ago. Seven years old at the time, she was home from school for reasons that remain fuzzy all these years later, but she but does remember her frantic mother, Kathy, scooping up her children and crying.

The mother was distraught because her brother — and Kaitlyn ’s uncle — Donald Walter Robinson, Jr. was an employee at ill-fated Cantor Fitzgerald.

The banking and brokerage firm, which was located on the 105th floor of One World Trade Center, lost more than two-thirds of its workforce, 658 in all, in the Sept. 11, 2001 terrorist attacks. But at the time, the Cunningham family did not know if Donald Robinson Jr. was one of those victims.

“The one thing that I clearly remember is mom grabbed me and my three brothers and said that we need to pray,” said Cunningham, a former star lacrosse player at Manhattan College who graduated this past spring. “She said we needed to go to our rooms and say a prayer. But I remember my youngest brother, Conor, said, ‘Mom, I don’t know how to pray.’ So my mom told me to take my brother to my room and teach him how to pray.

Even from second grade I remember that. I also remember people coming to our door and bringing flowers and my mom crying and hugging them for long periods of time. Those are the most prominent memories I have. I was so young I just couldn’t understand at the time what was happening.”

Robinson was one of the nearly 3,000 people killed that day, and ever since, the Cunninghams and their extended family have honored Robinson by attending the annual memorial at Ground Zero. But this year it was different for Kaitlyn Cunningham, and it all started with a series of phone calls she decided not to take.

“I was on the beach talking to my brother about a tattoo I wanted to get for my uncle and this number kept calling me all day on my phone and I just didn’t feel like answering for some reason,” Cunningham said. “I just didn’t want to deal with anything while I was on the beach. But I eventually called the number back and they said, ‘This is the Ground Zero and 9-11 Memorial and your name has been chosen in a lottery to read the names this year.’ I was like, ‘Oh my God.’ I was definitely not expecting that.”

Part of the conversation Cunningham was having with her brother on the beach centered on continuing what has become something of a family tradition: getting a number 26 tattoo. It was to remember the fallen brother, uncle and son, a sign of respect displayed proudly by the whole Cunningham family.

“I was talking to my brother about getting the number 26 tattoo. That was my uncle’s number when he played lacrosse in high school and college,” Cunningham said. “My brothers and I all wore number 26 in high school for him and they wore it in college and I wore it my four years on the lacrosse team at Manhattan. My younger brother still wears it. It’s like a family number now. My brother Pat has the tattoo, my cousins, my uncle’s children, they all have the tattoo.”

Since her uncle lost his life now 15 years ago, Kathy and Kaitlyn Cunningham have made the annual pilgrimage from their Spring Lake, New Jersey home to lower Manhattan to honor Robertson Jr. And though in past years Kaitlyn Cunningham’s mother and grandparents have had the honor of reading the names of those who perished, this year was the first time Kaitlyn was the one reading the names.

“This year,” Cunningham said before the event, “I’m not in school anymore, but we’ll still go together the night before and my brother Patrick will also be with us, too, because he had been at the University of Tampa the past couple of years, so he has never seen Ground Zero Memorial and he has never seen the museum. It will be a first for him.”

“I’ll read 21 names,” she added, “including my uncle’s. I’ll be at the podium with someone else, so I’ll read one name and then they will read one and it kind of goes back and forth,” Cunningham said. “When I read my 20 names that’s when I’ll say, ‘And my uncle, Donald Walter Robertson Jr. Loving husband, brother, uncle.’ I don’t exactly know everything I’m going to say. I haven’t written it out yet.”

And while there was another name Cunningham was not going to read aloud, she was to be at the podium when that name, of the son of her grandparents’ friend, was announced.

“What’s funny is my grandparents [Marcee and Donald Robertson], their son is the one who died on 9-11, get together once a month with other parents who have lost their children to September 11,” Cunningham said. “My grandmother calls it ‘Ladies Lunch,’ and they go to lunch once a month to meet up. So they asked me because I’d be reading names in the letters ‘I and ‘J’ if I had a man whose last name was Ingrassia. It turns out Christopher N. Ingrassia is the son of one of her friends from Ladies Lunch. He’s on my list, but the woman I’ll be standing at the podium with is reading his name.”

That is not the only coincidence the Cunningham family has experienced in all the visits to the memorial each Sept. 11. Last year brought Kathy and Kaitlyn Cunningham together with a woman they had never met before, but it was an encounter neither will ever forget.

“We were at the memorial last year and we’re just set to leave.
We all had our ‘Donnie’ pins on with his face on it,” Cunningham said. “And this woman is walking past and she just stops us and almost starts crying and she says to my mom, ‘Are you Donnie’s wife?’ And my mom said ‘No, Donnie was my younger brother.’ Then the woman said, ‘I just wanted to let you know I worked with Donnie and he was one of the best parts of my day every day. He was an incredible person.’ Then she said, ‘I was let go from Cantor Fitzgerald the day before 9-11.’ She said she goes to hear my uncle’s name every year.”

Cunningham said she had been a bit on edge ever since she received the phone call that day on the beach, but she insisted she would not break down when reading her uncle’s name.

“As soon as I got off the phone that day, I was extremely nervous and I’m still nervous because I don’t want to be the one who cries or anything on the stand,” Cunningham said. “I want to be strong and speaking confidently, and I think I will be. It will be a very emotional day but it will be a good day. Even though it is sad, it’s very therapeutic.”

For anyone who lost a loved one on Sept. 11 or even knows someone who lost a family member, the emotional drain of returning to Ground Zero takes an enormous toll. Cunningham and her family are no different.

“I’m always kind of happy when the day is over. Every year it’s just so hard on my mom and everyone involved,” Cunningham said.

She did not cry, as she had hoped she would not. “Sunday went great,” Cunningham said after the ceremony. “I was super nervous but I happened to make eye contact with Donald Trump before reading and he shot me a thumbs up which made me laugh. It went really well.”

The Cunninghams were planning to regroup after the ceremony, take a long last look at the memorial, one that would last them until next year, and then head back to Spring Lake for some events that have become tradition in their hometown since 2001.

“In the past, we’ve let balloons go at the beach and lit candles,” Cunningham said. “There is a memorial in town, and my uncle’s name is on the plaque there, and there is also a silent run on the boardwalk and a small service afterwards.”

A few days after the services at Ground Zero, Kaitlyn Cunningham will be getting on with her life again. After graduating from Manhattan College with a degree in physical education last spring, she is flying across the pond, as she pursues her master’s degree at the University of Nottingham in England.

“I’m going to grad school in England and I’m going to be playing lacrosse on scholarship,” Cunningham said. “Hopefully I’ll be wearing number 26 again over there.”