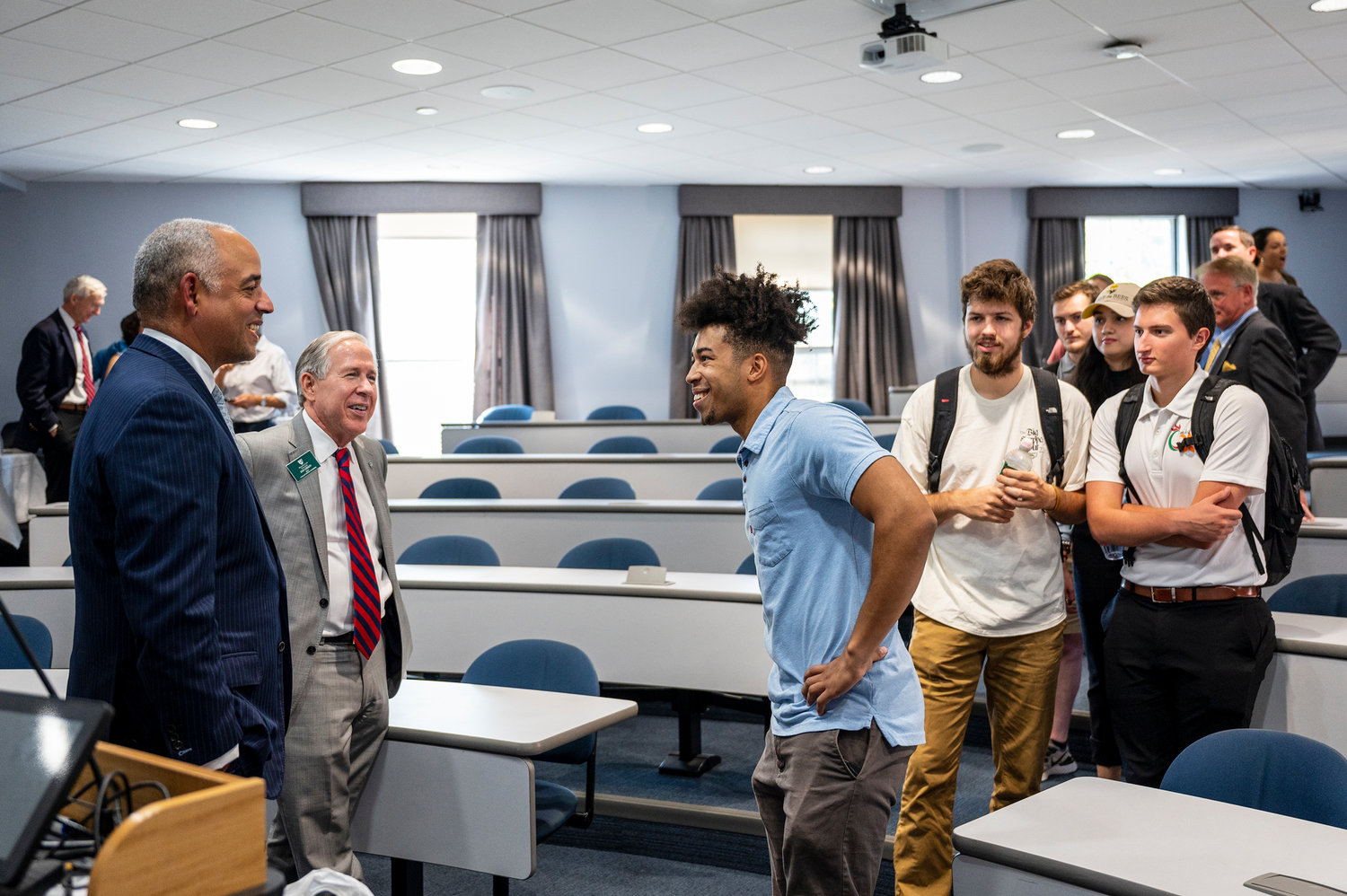 Being a first-generation American in his family, Jose Minaya grew up in a Dominican Republic household in Washington Heights, where his parents focused on saving rather than spending. Now, he is the chief executive of Nuveen, a TIAA major investor firm, overseeing all investment activities for more than $1 trillion in assets worldwide.

On Sept. 21, he was welcomed back to his alma mater Manhattan College in honor of National Hispanic Heritage Month. He gave a lecture to discuss his accomplishments with a hope to provide the next generation of students with a glimmer of inspiration.

Donald Gibson, the dean of  the O’Malley School of Business, with only 750 students enrolled, said the students who did attend seemed like they were really into it. During a Q&A, students asked the financial executive questions they were itching to get out.

In the intimate space of De La Salle Hall full of mostly finance or business majors,  students engaged with Minaya. The event was co-sponsored by the O’Malley School of Business and Fuerza Latina — a club immersed in Hispanic culture.

Kayla Reyes, a computer engineer and sophomore at the private institution thought she stuck out like a sore thumb because she believes she was the only engineer in the room.

To her, you don’t need a title of a business student to learn more about business.

“Someday, I want to do something like that,” she said.

Minaya is responsible for Nuveen’s vision, strategy and day-to-day-operations. He has more than 27 years of investment experience at firms including AIG, Merrill Lynch and JP Morgan.

After Manhattan College, he received his business degree from Dartmouth’s Amos Tuck School of Business.

“It’s not only cool to see your own people, but to see people who grew up in a similar community,” Reyes said.

“Being able to hear that gives me the motivation to keep on pushing forward.”

Prior to the event, Reyes did her research to learn more about Minaya. She found out that they were both cut from the same cloth.

Both of them are of Dominican descent. She grew up in the south Bronx and Harlem on 125th Street, home to the Apollo Theater — right next to Minaya’s native neighborhood. She realized if he could get to a position of power, she could do the same.

It was not easy for Minaya, however.

“Once I left (Manhattan College), that was stressful. It was just the real world,” he said.

Similar to now, there were plenty of first-generation college students in ‘94. But there, he spent time with a group of friends from the same background. At the time, he didn’t know it, but the institution nurtured him.

As for Reyes, when she was beginning her college career, one of her “techy” classes seemed strange to her. She realized she might be the only female in the class of 20 students.

But the following day a second woman entered the class. For Reyes she said it was not only that she was a woman in the class but a woman of color.

“Early on in my career, I didn’t share my story,” Minaya said. “My dad was a dishwasher, and my mom was a housekeeper at the Waldorf Astoria.”

According to statistics from the U.S. Bureau of Labor, people who were foreign-born U.S. citizens had the lowest unemployment rate compared to native-born.

The business leader was never embarrassed by his father’s low-paying wage needed to pay the household bills.

But as he grew older, he realized that it made his peers feel uncomfortable. Instead of telling the truth about his parents, he would say that his dad worked as a chef in a restaurant.

He realized he was in a foreign world by listening to his peer’s experiences. He felt they were avoiding an awkward conversation by purposely not talking about their experience in the Hamptons while he never left Washington Heights.

On an average day, in 2016, Hispanics spent less time on leisure and sports than non-Hispanics. While Hispanic women were also noted in the bureau data to spend more time taking care of the house and family needs than other non-Hispanic women.

Once Minaya got married, he realized he wasn’t the only one who thought this.

“My father-in-law once told me about this (anecdote) where he was a CFO in Philadelphia, and he came from India,” he said. “Everybody for lunch would go out and talk about the Flyers (hockey team in Philadelphia).”

Unsurprisingly, this action hurt the CFO’s feelings because he was never invited. But he never had seen ice before. So he he taught himself hockey by watching TV as if it was a class.

One day Minaya’s in-law said to his colleagues, “Hey, what did you think about that game last night?”

The chief executive said he did not take it personally. It was the exclusion that was the difficult part.

However, as for Reyes, her life growing up was slightly different. She was not a first-generation college student. After serving as a Marine, her dad received his degree at Manhattan College to became an electrical engineer.

“My dad taught me PEMDAS,” Reyes said. It means “Please Excuse My Dear Aunt Sally” to help students in elementary school learn the order of operations. Her dad, an alumnus, was an electrical engineer, inspiring her to choose engineering as her career path.

She had someone to go to if she was frustrated with a subject. Something he knew so well.

Minaya wanted to give this experience to his younger brother, who was 14 years younger. When Minaya became prosperous and encountered his own obstacles, he helped his younger brother after he graduated from high school and eventually Brown University.

“When he went to Catholic high school (All Hallows), I remember saying you should apply to these other broader schools, and his counselor said to him, ‘hey, that’s not for people like you,’” Minaya said.

Education statistics say 11.9 million students attended colleges and universities in the fall of 2020. While that same year, 9.5 million were White students, followed by 3.6 million Hispanic.

In 2020, 25 percent of Manhattan College’s population were of Hispanic descent.

Minaya believes the counselor was not discriminating or doing a disservice. In the south Bronx, it was trying to enroll kids in any college or earn a technical degree.

A big fear is rejection. What if a college turns them down?

Minaya said in life, you will get turned down a lot. But he suggests students apply to college just to at least through the process.

“I’ll go try to face a Major League pitcher right now. I’m going to look like a fool— But hey, ya know, why not?”

The chief executive was a baseball player who was signed the Pittsburgh Pirates. But he quickly realized it was not for him.

“You can go from being the best at something to not even being on the team anymore,” he said. “That was a humbling experience, so I better now go figure something else out.”

To him, it was a process of elimination.

Besides his chief executive position, he dreams of his next career move being a visiting professor because he enjoyed the energy in the room during his lecture and missed the college campus experience.