Councilman Andrew Cohen to street co-naming request: Forget about it 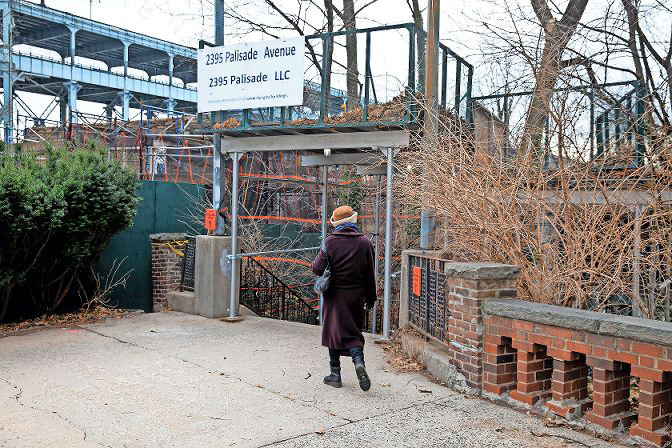 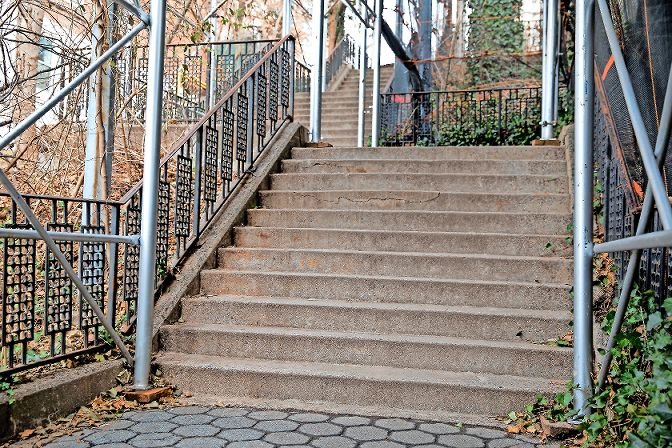 Bradley Terrace, a step street that runs parallel to what was once the Villa Rosa Bonheur apartment building, was expected to get a nod to history with a ceremonial renaming. Community activist Stephanie Coggins had hoped to recognize not just Villa Rosa Bonheur, but also its developer, John J. McKelvey Sr. Councilman Andrew Cohen, however, said no.
JULIUS CONSTANTINE MOTAL / File
Previous Next
Developer's son dies at 103

People familiar with Spuyten Duyvil history may know a lot about John J., McKelvey Sr., the developer behind Villa Rosa Bonheur and much of the greenscape this part of the Bronx now enjoys.

But not everyone may be familiar with his namesake. John Jay McKelvey Jr., spent his career as an entomologist for the Rockefeller Foundation, including some efforts that ultimately led to Norman Borlaug’s Nobel Peace Prize for his breakthroughs in what production in 1970.

McKelvey, who graduated from Horace Mann School, and was one of the family members Stephanie Coggins was hoping to help honor with a ceremonial street co-naming near one of his father’s former buildings, died Sept. 6. He was 103.

He was married for 65 years to Josephine Gibson Faulkner, until her death in 2006. They had four sons together, including John Jay McKelvey III, now living in Tacoma, Washington.

He retired to Richfield Springs in Otsego County in the early 1980s, becoming involved with two churches in the community, according to a published obituary: the Federated Church of West Winfield, and the Miller Mills Community Baptist Church.

Stephanie Coggins makes no secret of her love for Spuyten Duyvil. She’s not afraid to stand up for what she believes is the beauty and character of the neighborhood, no matter how big the foe may be.

But the self-described “accidental activist” never intended to be so front-and-center. In fact, it wasn’t until developers decided to raze the century-old Villa Rosa Bonheur apartment building at 2395 Palisade Ave., overlooking the Spuyten Duyvil Creek, that she made her voice heard.

Unfortunately, no matter how hard one fights, victory may not always be in reach. The last remnants of Villa Rosa Bonheur were carted away as the coronavirus pandemic took hold of the city, leaving the apartment building as nothing more than a chapter in the community’s history.

And in the same breath, defeat is not always solitary as Councilman Andrew Cohen rejected a plan that would ceremonially co-name a step street nearby.

As she fought for Villa Rosa Bonheur, Coggins learned nearly every detail of its history — a lot of it forgotten, even by those who have called the neighborhood home for decades. What better way to highlight some of that history — including the barrel-tiled roof apartment building itself — than memorializing it wherever people can see it.

Late last year, Coggins dedicated nearly every free moment she had pushing to co-name Bradley Terrace — a step street that leads to the Spuyten Duyvil Metro-North train station after both Villa Rosa Bonheur and its developer, John H. McKelvey Sr.

“I really put hundreds of hours of work into this,” Coggins said. “This time last year, my husband and I went up to the Catskills, and we rented a house for two weeks. I was there, in one of the bedrooms, pounding away on my laptop, trying to do enough research that I could put together a substantial nomination letter.”

Coggins presented all this material to Community Board 8’s traffic and transportation committee, many of whom were enthusiastic about her idea. It then moved on to a pair of votes from the entire community board, supported by letters from seven different community groups.

The only hang-up was that naming streets after buildings — even if they have some basis in history — was not something the committee had faced before.

Laura Spalter, the current chair of CB8, was part of that process. If anyone had any issues with what Coggins was proposing, she didn’t hear it.

“Throughout this process, we were not made aware of any opposition,” Spalter said. “A concern was raised that the board had not previously considered co-naming after a building, and language was added to our ethical guidance manual to enable the board to include historic buildings.”

Cohen, however, remained silent through the process. He told The Riverdale Press in January that he was aware of Coggins’ efforts, but he had hadn’t had a chance to consider it. Instead, he said he would wait to see what CB8 decides.

CB8 gave its blessing, submitting the entire proposal to Cohen at the end of April. The community board’s role in such matters is only advisory, and Cohen is not obligated to follow any of its recommendations.

The matter lingered for months, and it’s not surprising. By the end of April, the city was locked down because of the coronavirus. Efforts like ceremonial street co-namings were on the backburner as the health and economy of the city virtually collapsed.

By September, however, the city has returned to some normalcy, although the COVID-19 threat remains ever-present. There is now room to focus on other things that aren’t related to the pandemic, like drag racing through the streets.

But for Cohen, there’s no room for Villa Rosa Bonheur or its designer, McKelvey.

“Essentially, he does recognize Ms. Coggins and the advocacy and the community board’s support for this proposal,” said Harmony Guo, Cohen’s spokeswoman. “He has taken a while to think through his proposal and give it serious thought and consideration.

“He does believe street co-namings are meaningful ways of honoring the community and culture, and are not just symbolic. It’s just that this particular co-naming is not a legislative priority for him.”

Dan Padernacht, chair of CB8’s traffic and transportation committee who also is running to replace Cohen, said personally he’s “puzzled” by the councilman’s decision to not allow the ceremonial co-naming to move through. In fact, he believes Cohen could have done more to prevent this from being an unwelcome surprise for those who had backed Coggins’ proposal.

“Absent a compelling reason, the proper thing to do would have been to let the community know of his disagreement early on to prevent any embarrassment to the family, and save the applicant’s hard-spent time working on this initiative,” Padernacht said. “The council member had at least four public meetings to express doubts or ask questions over the course of months during which the application went through the community board.”

Because so much time had passed, he added, it was generally believed the proposal was heading to the city council for approval — generally as part of a mass piece of legislation handling a number of ceremonial co-namings across the city at once.

“John McKelvey Sr. was a preservationist that helped shape the green and open features of Riverdale, being one of the early advocates of principles we see codified in the Special Natural Area District,” Padernacht said. “Villa Rosa Bonheur was a beautifully designed building by McKelvey. Its honoring was intended to be a symbol of quality construction and a statement about development in our area.”

After all her work, Coggins said Cohen wasn’t even the one to break the bad news to her. And the why didn’t make sense to her.

“I was offended, but open to better understanding what the substantial reasoning is behind Andy Cohen’s decision, because I want something productive to come out of this,” Coggins said.

“I worked very, very hard for the sake of the community, and this is a very important issue to me.”