Rescued from the rubble, Nohad and Samia Jourdy vowed to reopen storefront 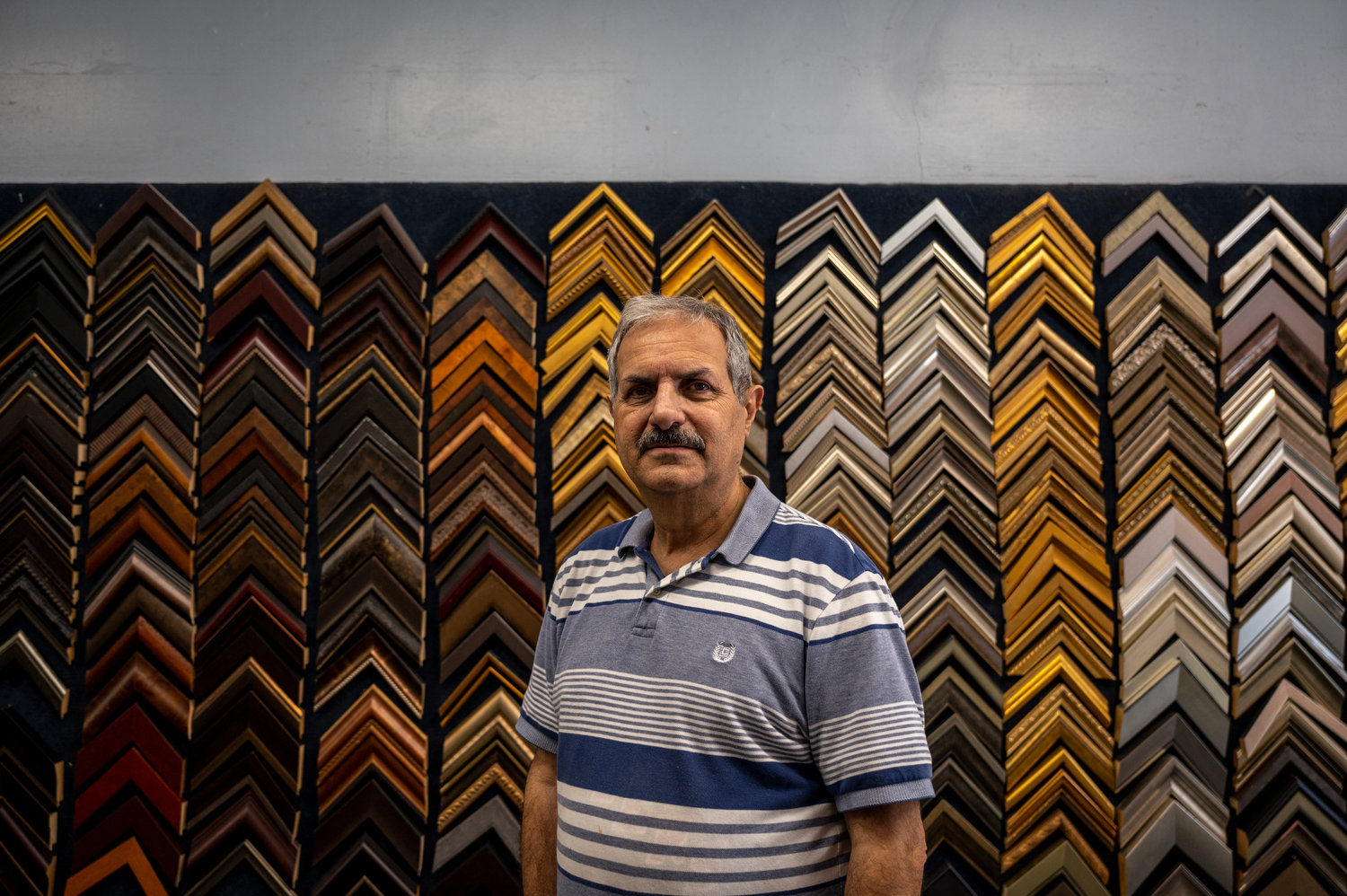 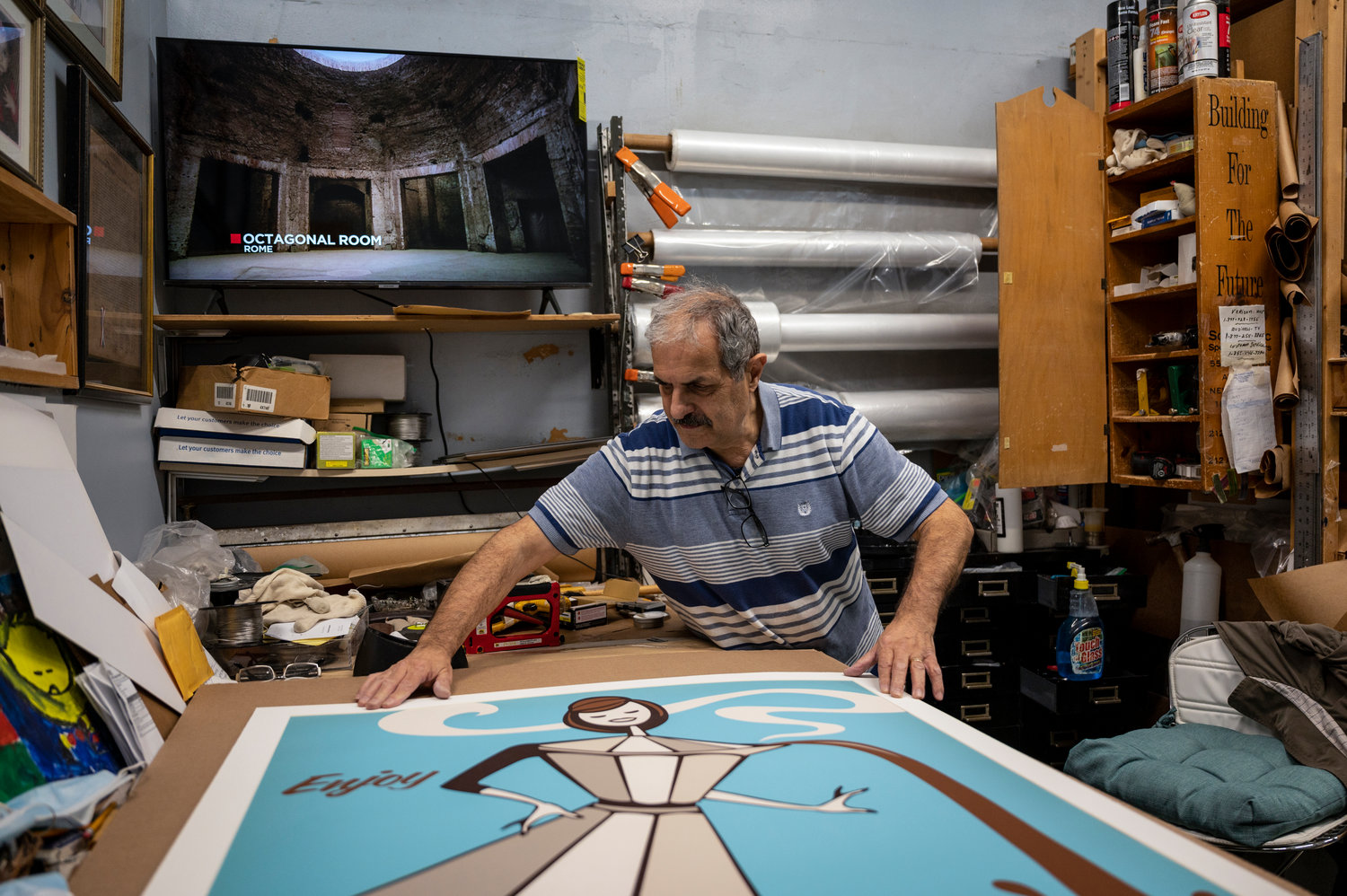 Nohad Jourdy, co-owner of Picture Perfect Frames on West 231st Street, works on a customer’s order in the back of the newly reopened store. The store’s ceiling collapsed on Jourdy and his wife, Samia, last November, shutting down the business.
HIRAM ALEJANDRO DURÁN 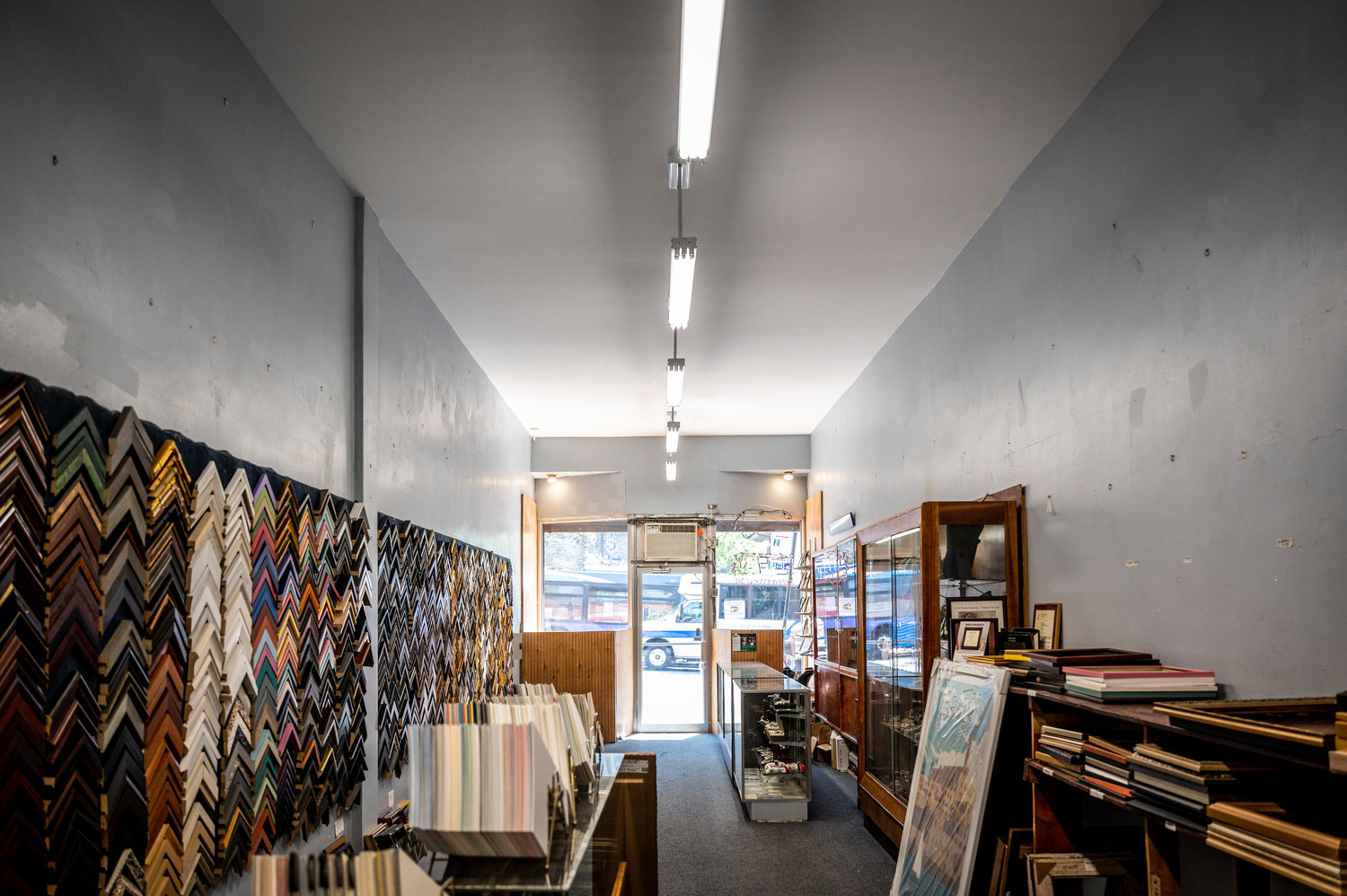 The ceiling at Picture Perfect Frames collapsed on owners Nohad and Samia Jourdy last November, leaving them out of work until their West 231st Street location reopened last month after repairs were finished.
HIRAM ALEJANDRO DURÃN 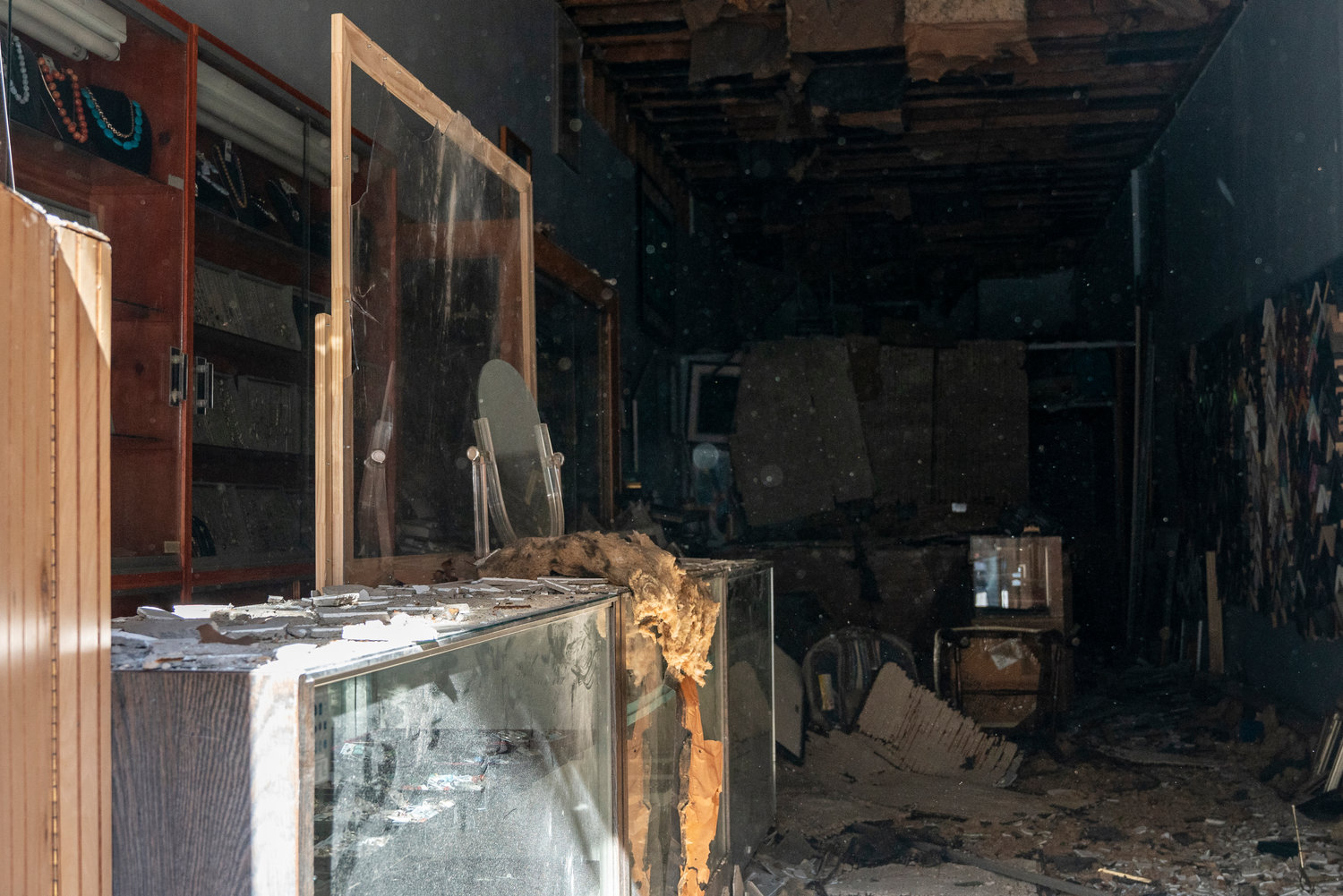 Picture Perfect Frames on West 231st Street was shut down in November after the ceiling collapsed on owners Nohad and Samia Jourdy. Debris fell onto the owners, trapping them inside until firefighters freed them.
HIRAM ALEJANDRO DURÃN/ File 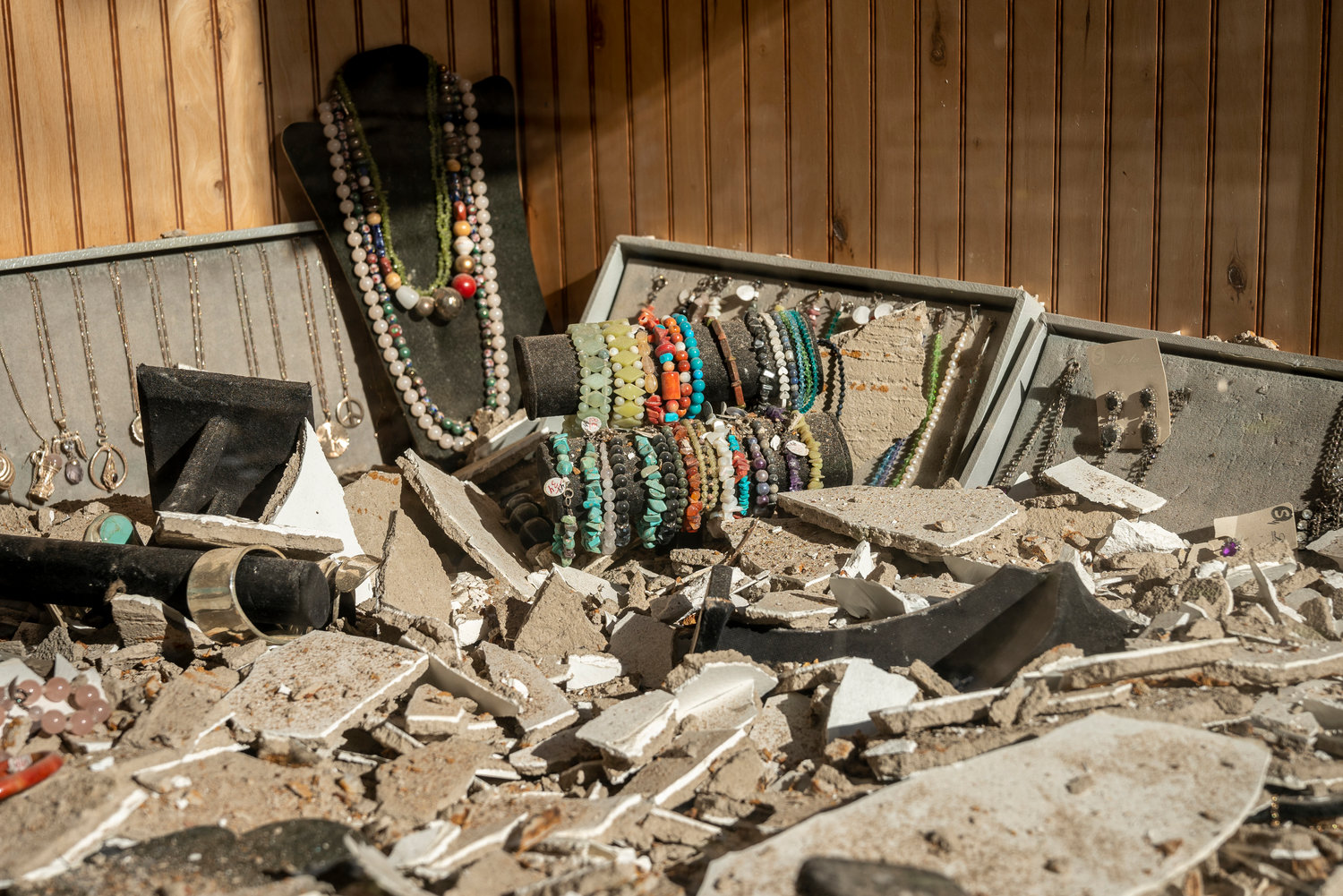 After the ceiling collapsed on them last November inside their West 231st Street store, Picture Perfect Frames owners Nohad and Samia Jourdy worked to recover customers’ artwork buried under the rubble.
HIRAM ALEJANDRO DURÁN/ File
Previous Next
By BRENDAN O’SULLIVAN

The months were long as they gathered permits and waited for construction to finally finish. But just before Memorial Day the wait was over. Nohad and Samia Jourdy reopened Picture Perfect Frames on West 231st Street.

And this time its ceiling is perfectly intact — unlike what happened last November when it collapsed with the two of them inside.

“It’s good to come back for business,” Samia said. “It feels good.”

It was a typical Monday when the couple arrived at their family-owned business in Kingsbridge last year. Nohad focused on the front of the store, while Samia took on her usual work station in the back.

But all of that changed later in the afternoon, and in a matter of seconds. The store’s ceiling collapsed, burying Nohad and Samia, screaming for help in what became total darkness.

“In one shot, (it) came down,” Nohad said. “It’s not like there was a warning or something like that.”

Samia, who was in the back of the store, was the first to be struck by the falling debris.

“I had no idea what happened,” she told The Riverdale Press while first responders were still treating her on-scene after the Nov. 2 accident. “The whole thing was on top of me. All of a sudden, I was on the floor and it was dark. All I could do was scream.”

Alex Gandia, a customer relations representative next door at Jim Hockemeyer’s State Farm branch, was startled by the commotion coming from his neighbor’s shop, and headed outside to see what was going on. It had all sounded like a freight train.

“The noise and the vibration (were) just amazing,” Gandia said. “And then when you walk outside, it was normal. Cars driving by, pedestrians walking by. And then we noticed we couldn’t get into their door. And then we heard her screaming.”

Gandia called 911 and the New York Fire Department quickly rescued the couple from under pounds of rubble.

Nohad had been struck in the back of his head. Paramedics on the scene treated him, but he still nurses the injury to this day, regularly seeing a neurologist.

“I’m still getting my head examined,” Nohad said. “But I’m trying hard to stay in the business and run this business.”

Their neighbors, like Gandia, were worried about the couple’s health.

“Our concern was about them and their family, of course,” Gandia said. “So, that’s the most important thing.”

When the ceiling first collapsed, it wasn’t clear why. Since then, however, Nohad believes it was excess moisture that caused the accident.

The collapse forced Nohad and Samia to close the store until the new ceiling was built. It was the second time they were forced to lock the doors in 2020 after the initial shutdown in the wake of the coronavirus pandemic.

And even then, Nohad and Samia played the waiting game. They were out of work, just trying to survive despite not having any income.

“I got money from my son, actually,” Nohad said. He “really tried to help me to keep going.”

Nohad and Samia scavenged through the store after the collapse in an effort to recover art pieces from customers.

Gandia feared Picture Perfect — which has operated out of that location since 2002 — would not reopen. Many of their business neighbors checked on Nohan and Samia, and some even offered donations.

“Residents and people in the neighborhood know who they are,” Gandia said. “So, they were very, very positive and very helpful, very inquisitive. They were concerned about their health and the future of the business.”

The State Farm office even collected Nohad and Samia’s mail and customers’ names and phone numbers to pass along.

“People try to help out as much as they could,” Gandia said. “We’re glad they’re OK.”

Nohad and Samia have a positive impact on the commercial district, Gandia said, but their business also stretches beyond Kingsbridge into many places around the city, and even into New Jersey.

Work is slow right now, but Samia says she knows the importance of being back and providing for the family.