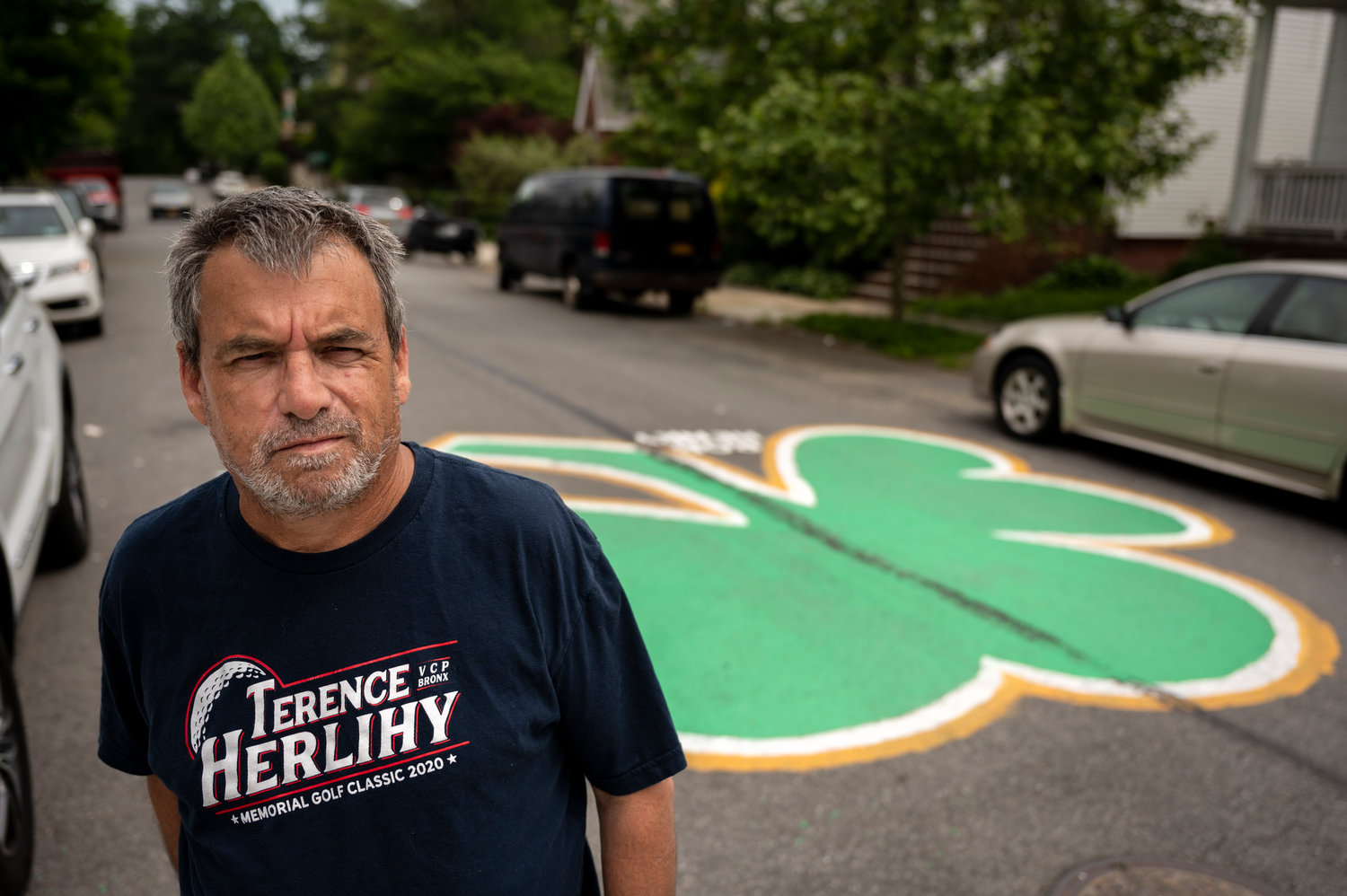 Pat Connaire poses for a portrait near the clover he painted at the intersection of West 260th St and Delafield Ave to honor two recently deceased Bronxites.
HIRAM ALEJANDRO DURÃN 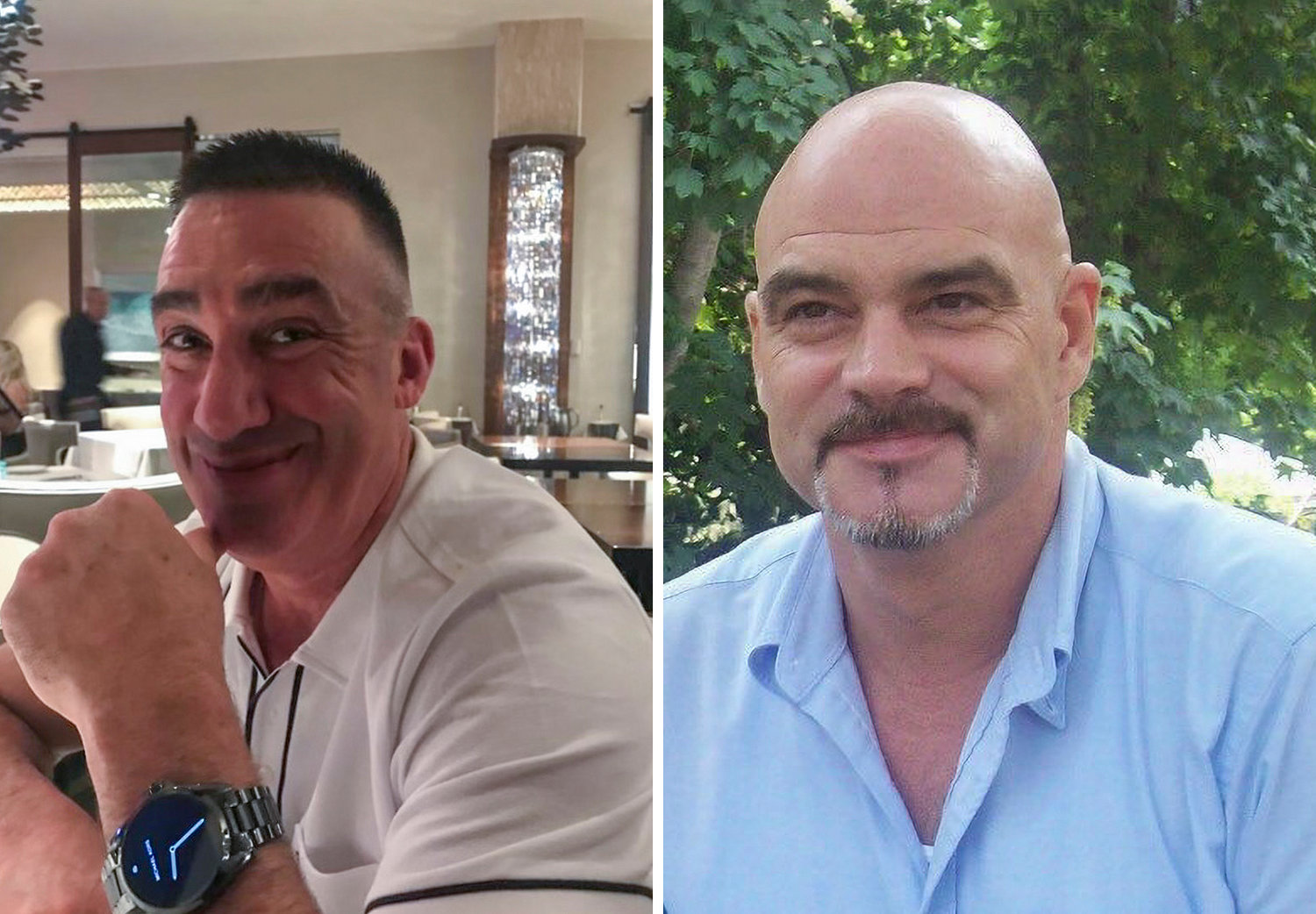 He felt very fortunate and very blessed to have loved so many people. Not to have been loved, but to love so many.”
ANN HENRY
By BRENDAN O’SULLIVAN

Every year around St Patrick’s Day, a large shamrock appears on the pavement at the corner of West 231st Street and Kingsbridge Avenue.

No, its sudden formation isn’t a magical apparition created through the luck of the Irish. Instead, it’s part of a tradition that’s more than a half-century old, continued by Pat Connaire to memorialize Kingsbridge residents who recently died.

Yet, it’s a tradition that has once again found its way to North Riverdale in recent weeks. And it’s all because of the passing of Rob Henry and Jimmy Becker.

Connaire painted a shamrock on West 260th Street near Delafield Avenue, looking to provide some solace for the families and friends of the two men.

“It’s a meeting place for everybody,” Connaire said. “It’s almost like church. People go in there and you get some kind of feeling. It’s like closure.”

While this shamrock painting tradition may have originated in Kingsbridge, Connaire has brought it to North Riverdale. And he’s expanded it beyond just St. Patrick’s Day — now, he paints a clover whenever he deems it important to mark events, like deaths, throughout the greater Kingsbridge and Riverdale area.

But the shamrocks — especially the one on West 260th — are hardly a one-man job.

Mary-Anne Connaughton, owner of Mary-Anne’s Irish Gift Shop on Riverdale Avenue, visited the spot just blocks from her store to draw the shamrock’s outline. From there, Connaire invited some family members and friends of Henry and Becker to participate in actually painting the clover. Its green interior is accentuated with a yellow and white outline.

“It was amazing to see so many of (Henry’s daughters) Julia and Fiona’s friends show up to make Rob’s shamrock,” said Dana Connaire, Pat’s wife.

The shamrock is just outside Henry’s West 260th home. Ann Henry, Rob’s sister, said her sibling left a positive impact on many people.

“He told my brother, when he was speaking to him about his cancer, that he felt very fortunate and very blessed to have loved so many people,” Ann said. “Not to have been loved, but to love so many people.”

Rob Henry was just 52 when he died from peritoneal carcinomatosis — a rare gastrointestinal cancer — not long after he was first diagnosed last December.

The cancer had already spread, said Ann, and it was terminal. So he ensured his daughters Julia and Fiona were financially and emotionally set for when he died.

“He told us at the beginning of January,” Ann said. “So, he was the kind of guy who wanted to make sure that things were taken care of before he told us. As my brother would say, it became very apparent as he called each person to tell them that he was terminal, that the call was really about him comforting us more than us comforting him.”

Rob spent his career working with Verizon. Pat knew Rob for some 40 years despite living in different neighborhoods as kids. Rob was a great friend — but not just to Pat.

“He’s always been there for people,” Connaire said. “He’s helped people battle things — like tough things in life.  And he’s there for them.”

Dana Connaire referred to Rob as a Riverdale “staple,” and a friend to everyone.

Some who attended the wake were once Rob’s neighbors in Riverdale, but had moved elsewhere. Still, they came to pay respects because Rob “had always been so friendly and had made them feel so welcome,” Ann said.

Jimmy Becker was a New York Police Department officer who died at 59 from glioblastoma brain cancer, believed to be caused by working in the World Trade Center rubble from the Sept. 11, 2001 terrorist attack.

Glioblastoma is the most malignant of astrocytoma tumors, which can occur in the brain or spinal cord, according to the American Association Neurological Surgeons.

While Connaire didn’t know him as well as Rob Henry, but he understands how important Becker was to the community. Dana Connaire described Becker as a “loving” uncle and brother.

Jack Becker — Jimmy’s nephew — appreciates the shamrock tradition, and is happy to see his uncle honored.

“We think it shows Riverdale as a tight-knit community, which it has been since our family moved here over 50 years ago,” Jack Becker said.

While this particular shamrock serves to honor Rob Henry and Jimmy Becker, the paint will eventually fade, leaving nothing but pavement. However, their friends and family say the memories and love toward the two will never fade.

“Both will be dearly missed,” Jack Becker said.