From the reservoir to the Palisades, music & art echo 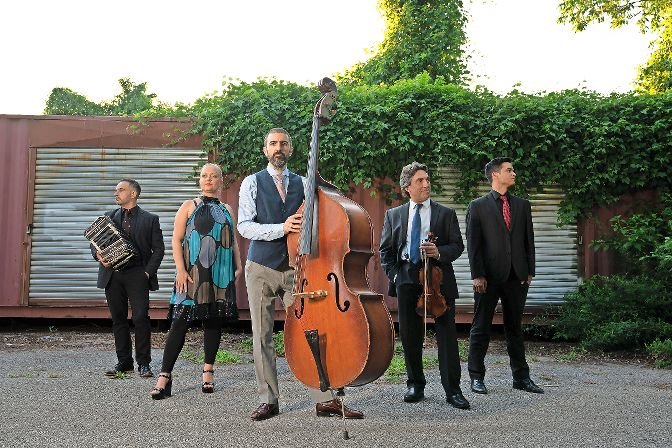 Award-winning musician Pedro Giraudo and his band perform at the Hudson River Museum in Yonkers to an audience limited to 50 people due to social distancing in the wake of the coronavirus pandemic.
Courtesy of Hudson River Museum 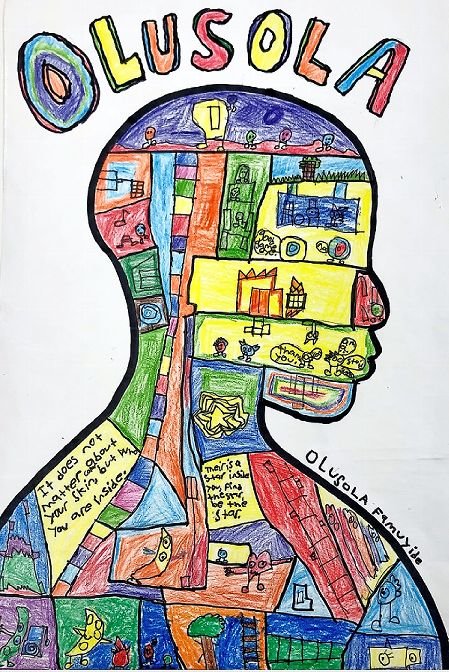 ‘Life Inside Me: I Am Olusola’ is a piece by Urban Scholars Community School student Olusola Famuyide, featured recently at Lehman Art Gallery’s virtual exhibit with the Bronx Borough Arts Festival. The gallery and the festival have presented work by students across the borough for six years, ‘and this year is no different,’ according to executive director Bartholomew Bland.
Courtesy of the Bronx Borough Arts Festival 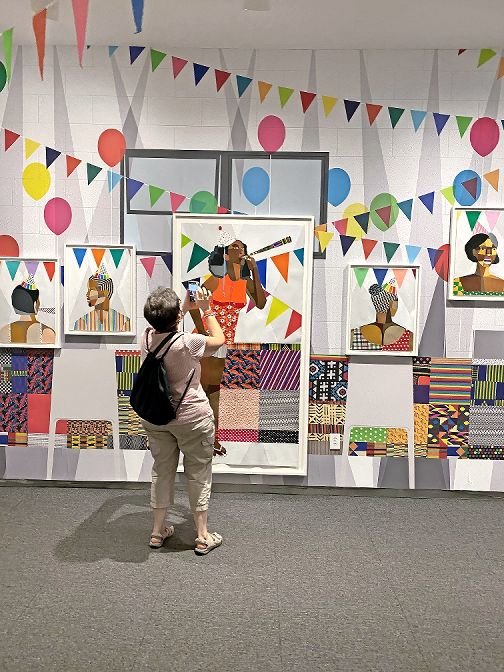 A visitor to the Hudson River Museum in Yonkers takes pictures of the recent Derrick Adams exhibit ‘Buoyant,’ which was reopened to the public at a limited capacity of 40 people. The museum has continued new exhibits and performances via its Amphitheater program, which accommodates 50 people, as the performance space is outside.
Courtesy of Masha Turchinsky of Hudon River Museum 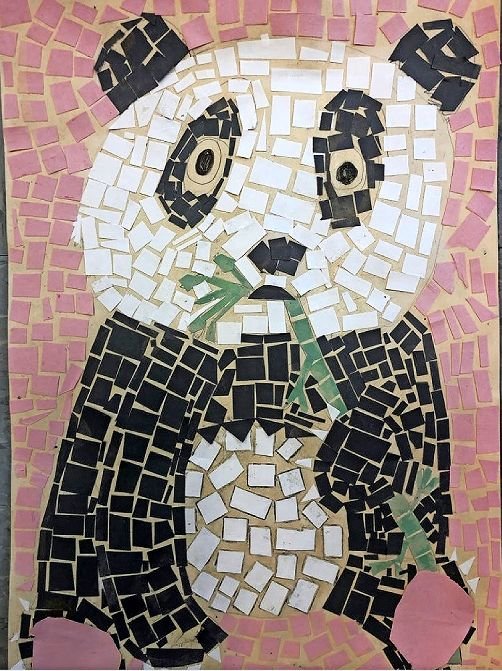 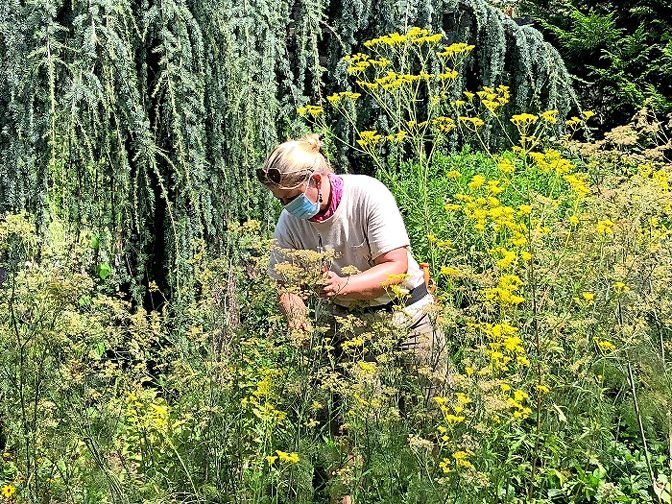 Wave Hill seasonal gardener Sandy Schaller tends to the gardens, as she and her fellow gardeners have done, even during Wave Hill’s closure. The gardens have since reopened, although only through reservation.
Courtesy of Martha Gellens 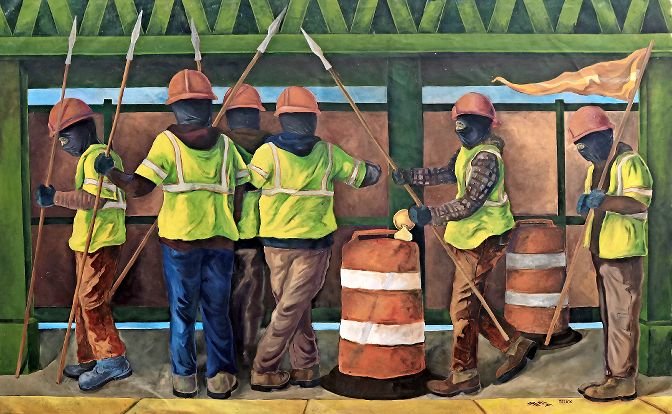 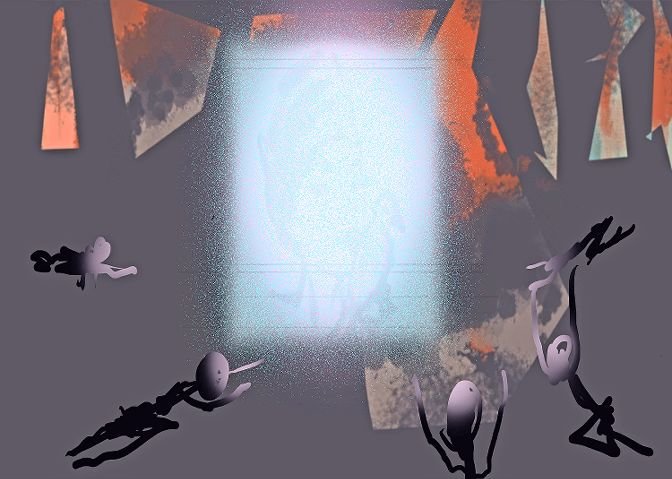 ‘Following Indecision’ by Lady Pena, an artist and fine arts graduate at Lehman College, was featured in the college’s thesis catalog, a collection of graduates’ thesis artwork. In previous years, the gallery hosted a live exhibit of graduates’ work, but due to the coronavirus pandemic, a catalog was created instead.
Courtesy of Lehman Art Gallery 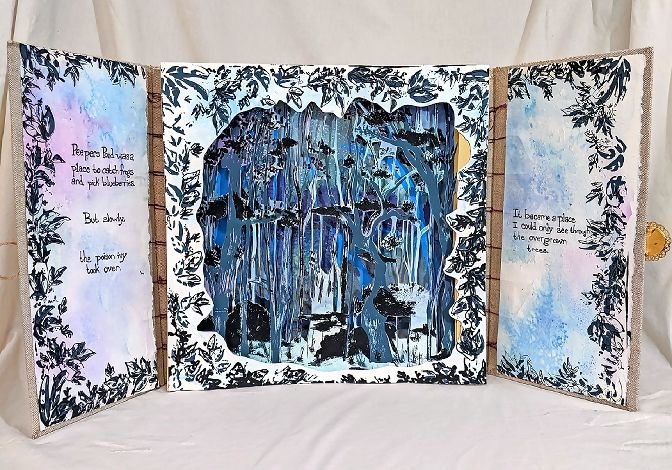 ‘Peepers Pond’ is a silkscreen multimedia piece by Kerry Fitzgibbon, a recent graduate from Lehman College’s fine arts program. Her work and many others were featured in the college’s thesis catalog, a collection of final theses by departing student artists.
Courtesy of Lehman Art Gallery
Previous Next

‘It’s true, it’s a little eerie on campus. It’s often high density, even at this time of year. But that’s why we’re taking so may precautions, like having very few in-person classes and getting students laptops. In fact, we’re preparing a full online series based on graphic design.’”
-Bartholomew Bland
By RAPHAEL LASSAUZE

It’s loud and busy around the Jerome Park reservoir. The nearby boulevard is full of cars and passersby.

It’s not cold out yet, but it’s a little chilly despite the low-hanging August sun.

It’s scholastic weather, the perfect atmosphere for studying. And grand old Lehman College is nearby.

But the campus is empty. The paths are abandoned. The doors are locked. The quiet is palpable. Branches shaking in the breeze seem to be the only movement.

But inside the college’s art gallery — be it in-person or safely through a computer screen — executive director Bartholomew Bland tries to inject as much life as he can into a seemingly dead grounds.

“It’s true, it’s a little eerie on campus,” Bland said. “It’s often high density, even at this time of year. But that’s why we’re taking so many precautions, like having very few in-person classes and getting students laptops.”

That means the arts, here at Lehman, will be online through the fall. At least for now.

The Lehman Art Gallery will present that series alongside the Sara Little Turnbull Foundation, an organization that advances and promotes underrepresented youth in the graphic design field. Several designers will give talks and interviews on vital topics in any artistic or social field, such as how design interacts with Latino heritage, gender and sexual identity, race and ethnicity, and — in a world like this one — disasters.

“What does the next pandemic look like?” Bland asked. “That’s one of the ideas some very significant designers will answer as well. It’s also open to the public.”

Lehman is working with the Bronx Borough Arts Festival, itself online this year.

“We often have the live show at the gallery,” Bland said. “But we’ve had to switch so much to virtual.”

It’s not as though being virtual is a waste, however. For some artists — like Lehman’s own graduating students — it was an opportunity to create work which could examine strange feelings like isolation, disconnect and powerlessness, in their graduating theses.

Pieces like “Following Indecision” by Lady Pena focus on paralysis, spectators, addiction and death in an ominous world, according to the artist. Intense contemplations like those can sometimes best be milled over in a place that is quiet by design, such as a garden.

A cautious ride on the Bx10 bus to Riverdale, followed by a brief stroll, leads to the Wave Hill gardens, and the very edge of New York City. The gardens reopened at the end of July, and those managing the 28-acre estate have since been very careful about how they implement social distancing guidelines and welcome visitors.

Yet Martha Gellens, communications director at the 4900 Independence Ave., establishment, says such measures are worth getting the opportunity to step out onto the grounds again.

“We’ve put guidelines in place such as fewer days and less hours on top of social distancing measures,” Gellens said. “You have to make a reservation and register for a certain day over the phone or the site. We’re not sure when we’ll expand that, but people have been trying to come back since the moment we closed.

“They’re relieved we’re open at all, even if it’s in a limited way.”

As mask-wearing workers maintain the grounds, the garden itself continues to host many virtual events, some in the form of live classes — such as watercolor painting — or simply as videos. Despite only being available and open in a limited capacity, Gellens and her team continue to plan carefully into the future.

“We’ll be hosting a botanical show soon,” Gellens said. “Some of its events will be virtual, and we’re still determining if any of it will be live. We’ll also have three sunroom space artists in the fall, which we’re very excited for. Providing the space to local artists is an opportunity even now. We’re going to be very busy.”

The focus of September, however, on top of everything else, will be bees. From classes on learning to cook with honey to learning distinctions between native bees and honeybees, Gellens hopes visitors learn the importance of pollinators in any season.

Some of those bees may be found buzzing northward over the edge of New York City and into neighboring Yonkers, where the Hudson River Museum stands with, of all things, open doors.

Deputy communications director Samantha Hoover, along with the museum staff members, have worked over the last few months to create a safe environment within Westchester County’s regional pandemic ground rules.

“We had our own task force,” Hoover said. “They made sure we put together the right guidelines and a checklist. We’re only permitting 40 visitors at a time, but they come in and they’re so grateful for a little normalcy.”

The museum’s amphitheater, however, has become its main attraction. Every Saturday through Sept. 19, the museum hosts a live, socially distanced concert with a limit of 50 people in a space which, technically, fits 500.

Saralinda Lichtblau, the museum’s assistant education director, believes visitors may find it all a bit strange, but certainly adaptable.

“People are so hungry for live performances,” Lichtblau said. “They’re willing to agree to account for the health requirements of a physical space — to agree to a social contract of sorts, which has been so important.”

From tango nights to jazz tributes and classical orchestras, live performances at the museum continue. Performances and classes, live or recorded art and music, continue at the cultural institutions of the northwest Bronx as well. In the end, however, the hope of each institution is to maintain the health and safety of each other.

“We’re so nimble, we’ve had to try many different things,” Hoover said. “We’re just trying to adapt and learn like everyone else.”