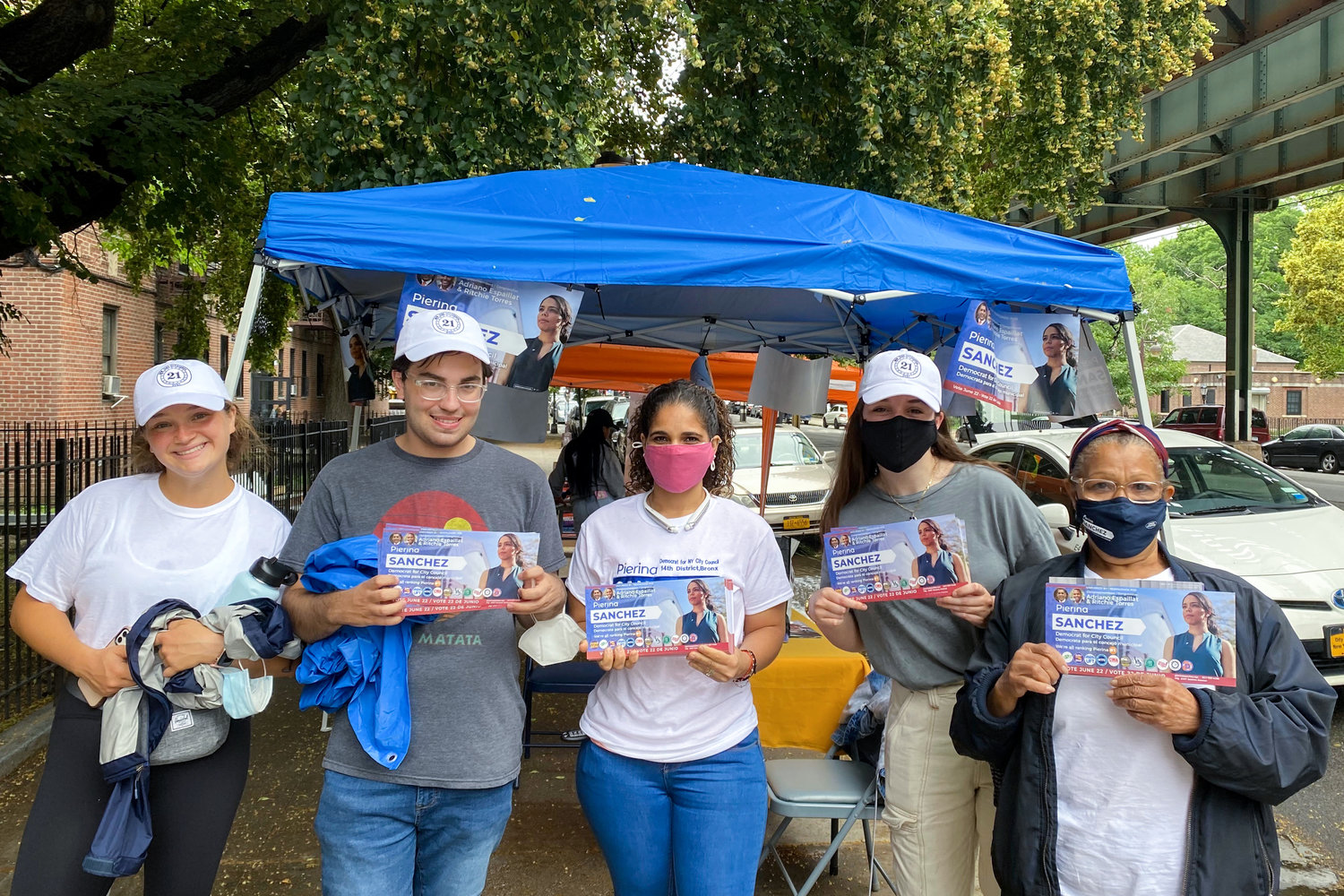 Eliza Simon, left, Aryeh Kalb, and Anna Woods stand with two volunteers for Pierina Sanchez’s city council campaign while working as interns for 21 in ‘21, an organization devoted to putting at least 21 women on the city council this year. And their efforts paid off, as it appears women will actually become the majority at City Hall.
Courtesy of 21 in '21 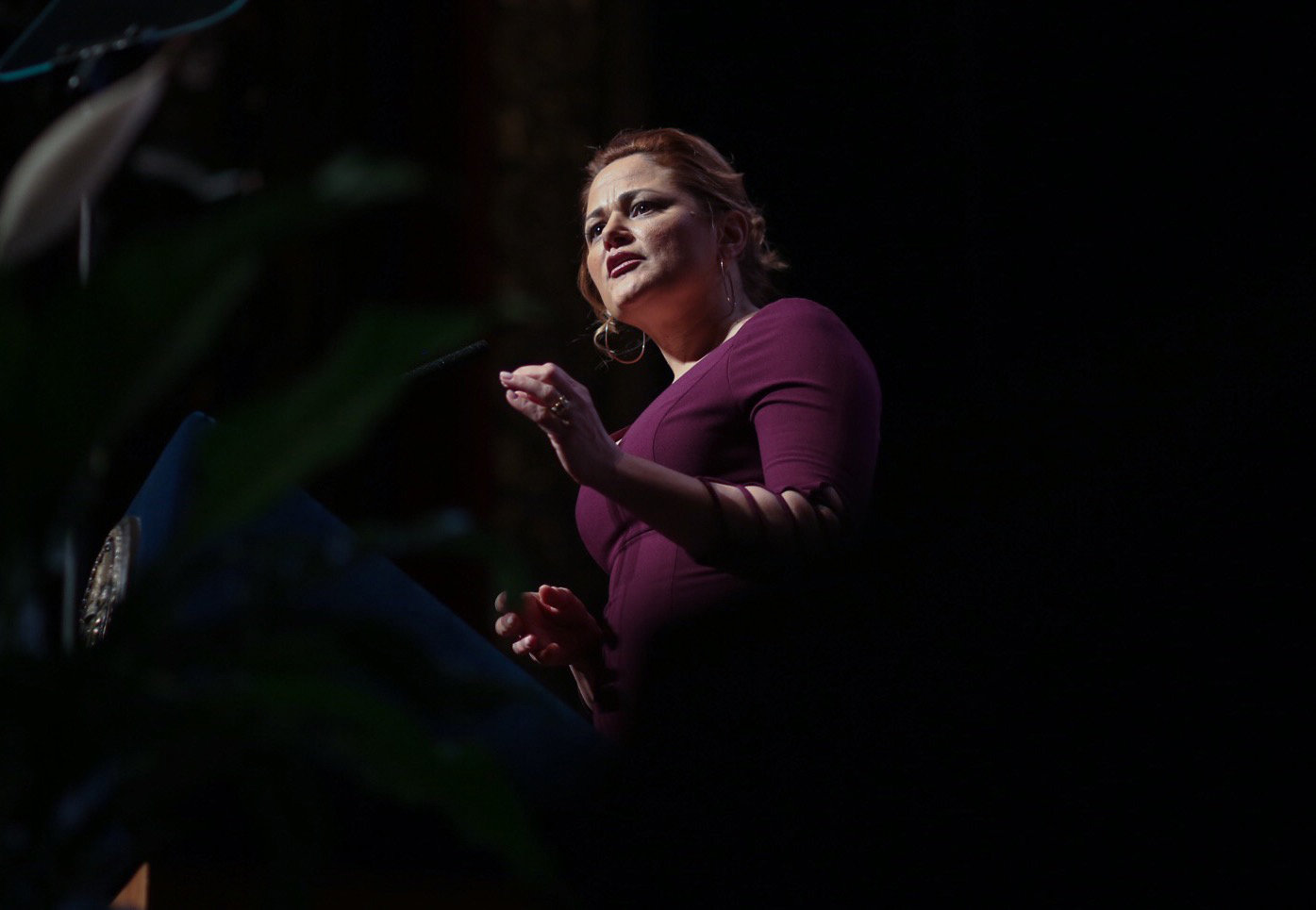 Former city council Speaker Melissa Mark-Viverito was a founder of 21 in ‘21, an organization devoted to elect at least 21 women to the city council this year after realizing a lack of female representation at City Hall. Her group, 21 in ’21, ultimately surpassed expectations when 30 women candidates won the Democratic and Republican primaries, advancing to almost assured victories in the general election.
Courtesy of New York City Council 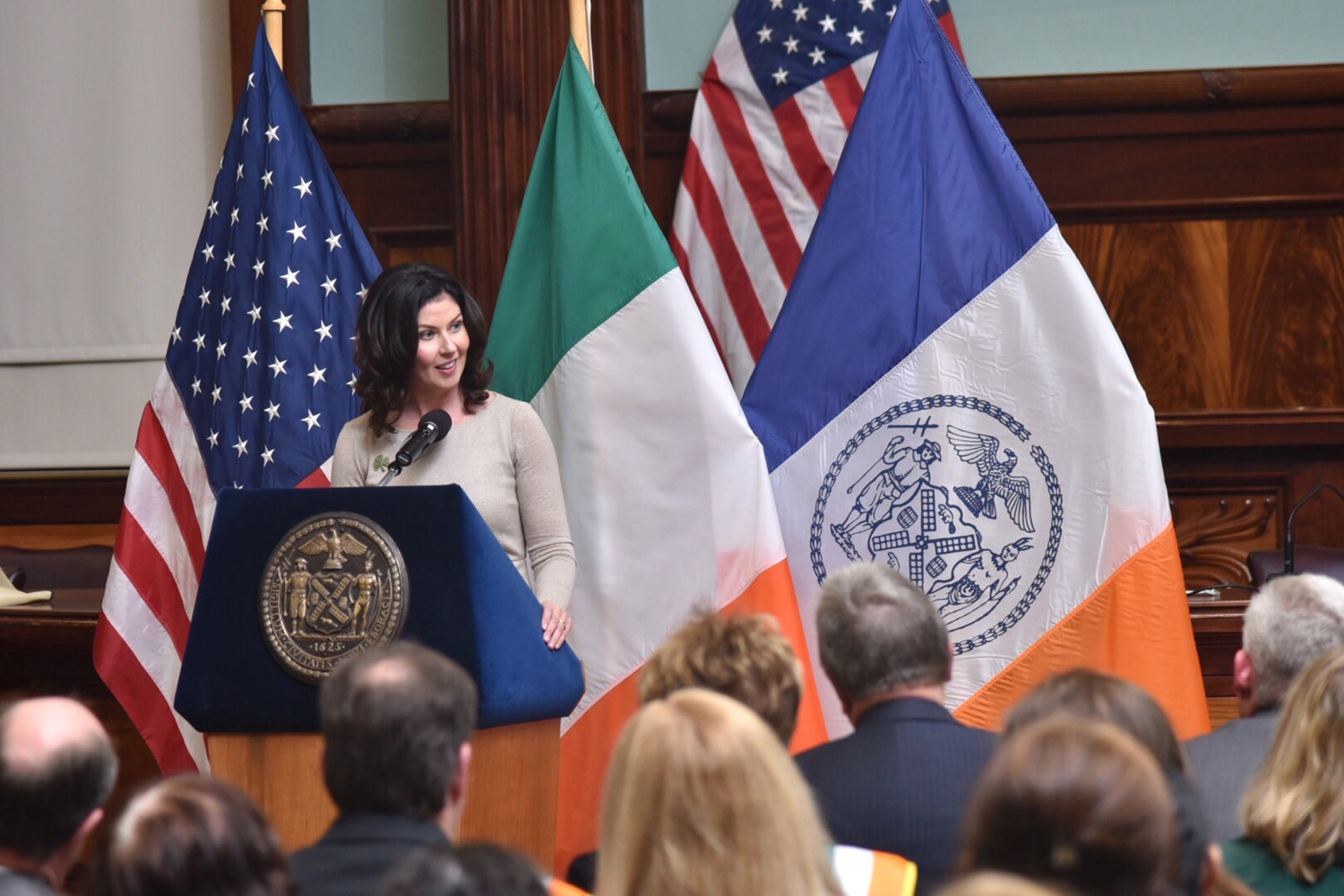 Former Queens councilwoman Elizabeth Crowley was a founder of 21 in ‘21, a group that has worked to elect more women to the city council. It appears she should have called the organization 30 in ’21, as women are set to take the majority at City Hall.
Courtesy of New York City Council 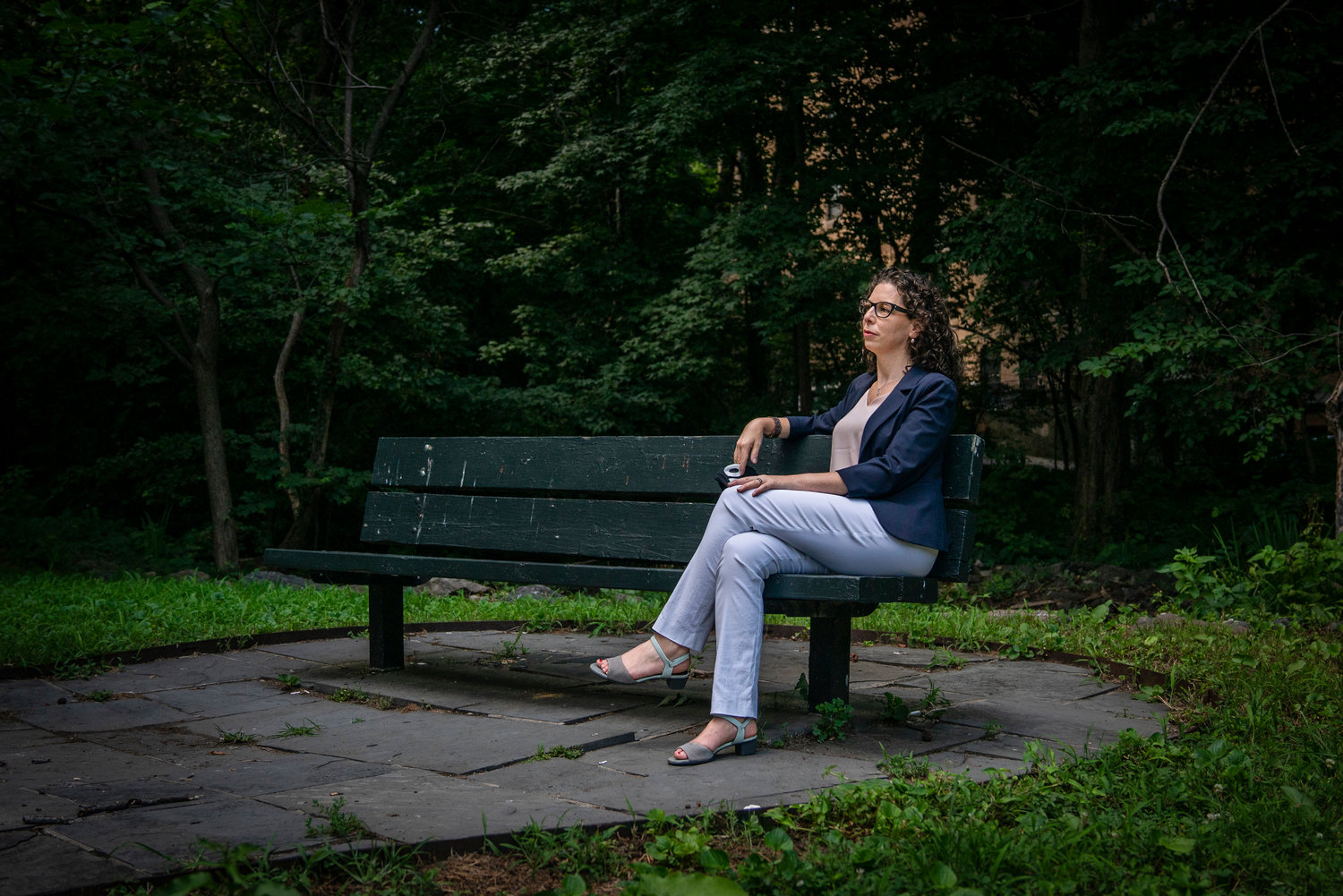 After losing the city council special election to replace Andrew Cohen, Jessica Haller became the executive director of 21 in ‘21 — an organization with the goal of electing at least 21 women to City Hall this year. The organization far surpassed expectations, Haller says, with 30 women winning last month’s Democratic and Republican primaries.
HIRAM ALEJANDRO DURÁN/ File
Previous Next
By ETHAN STARK-MILLER

Jessica Haller was ready to be her neighborhood’s next representative on the city council. She even ran in a competitive March special election to replace Andrew Cohen.

Unfortunately for Haller, she lost to Eric Dinowitz, and opted out of a second chance to claim the seat in the primary election a couple months later. As it turned out, Haller still had a hand shaping the makeup of the next city council — not as a councilwoman, but leading an organization that pushed for there to be more councilwomen.

Haller took over 21 in ’21, an organization dedicated to electing at least 21 women to a city council that, as of today, has just 14 out of 51 seats.

“My personal purview shifted from, ‘I am running to represent this district, and I would have been the first Orthodox (Jewish) woman in the city council,’” Haller said. “And it would have been really exciting. (But) I shifted from our particular data point to the whole city.”

And that shift paid off, as it won’t be 21 women expected to be sworn-in next January, but 30. That’s how many advanced to the November general election after winning in both Democratic and Republican primaries last month. Because most of these women are Democrats, winning the primary means they’re almost assured to win the November general election in a solidly blue city.

“We were really excited when we saw the results on election night,” said Yvette Buckner, vice chair of 21 in ‘21. “And were like, ‘Whoa, there’s a lot of women who are looking like they’re the frontrunners.’ And so, it’s just a beautiful thing to see come full circle, and to know that what we did mattered.”

And candidates felt it mattered, too. Pierina Sanchez said 21 in ‘21’s support played a key role in winning her primary to succeed Councilman Fernando Cabrera.

“They were just so intentional about their citywide dialogue and just really getting the word out about how important it was to elect women,” Sanchez said. “That receiving their early support, it just changed people’s ideas about what’s possible. About what the council will look like.”

Haller believes electing more women to the council is important because women lead differently from men, and tend to focus on a wider array of issues. Out of its 51 seats, women have consistently held just a dozen since 2017.

“Women think long-term. They have a focus on family and intergenerational issues,” Haller said. “So, taking care of older adults and parents and children, and being sandwiched in the middle of them. Women tend to lead with compassion and better listening skills.”

Mark-Viverito, Crowley and Kim formed the group in 2017, a few years after the council had dropped down to just 11 women. They felt there was a dire need to elect more women to the council, Buckner said. And someone needed to take an active role in making that a reality, instead of just waiting for it to happen.

“Because women were doubling, tripling, quadrupling on committees,” Buckner said. “So, like the education committee, the housing committee, land use. Like they had to be on four committees in order just to have a woman present on any of the committees at any given time.”

To start off, the organizations focused simply on getting more women into elected office, working with groups like EMILY’s List and Eleanor’s Legacy to make it happen. In fact, those groups — founded by Ellen Malcolm in the 1980s, and Judith Hope in 2001, respectively — were key to developing the focus and structure of what would eventually become 21 in ‘21.

This created a network of resources for women, said Amelia Adams, the group’s chair, which folded into their endorsement process. This involved years of educating women on policy issues and the workings of local government in a holistic manner — instead of just teaching a single side.

“Like every aspect of education policy,” Adams said. “Whether it’s a district school, a charter school, a labor union and so on. You know, both principals’ and teachers’ unions. Like really throwing at the membership kind of an understanding of what government is and policy. Things like that.”

The actual endorsement process lasted over the course of several months, Adams said. Each candidate seeking that backing had to first meet with the organization’s board one-on-one.

“We assessed, ‘How is this candidate’s stump speech?’” Adams said. “’How do they frame their story? How do they talk about issues that they want to focus on?’ Their viability. And do they stick to time? So, all these things that they need to do going into an endorsement screening — not just for us, but for every major organization and labor union.”

The second round involved the organization’s 2,500 members casting ranked-choice ballots — a system, Buckner said, they intentionally incorporated to help get everyone familiar with the new way to vote.

Each candidate winning 21 in ‘21’s endorsement was paired with a mentor, Buckner added. They included current and former councilwomen like Vanessa Gibson and Helen Foster.

Building on this foundation, Haller’s main contribution to the group as its executive director was identifying where in-person campaigning was needed. She helped mobilize the membership base into an army of volunteers blanketing council districts for each of their endorsed candidates.

“In the end, we shifted and scheduled hundreds and hundreds of volunteer hours for the candidates,” Haller said.

“And got them the boots on the ground that they needed. And most importantly, I think, feeling the support of the organization.”

And all of this support paid off. For the most part, at least. Of the 33 first-choice endorsements, 18 candidates won — including Sanchez as well as Marjorie Velazquez in the seat currently held by Mark Gjonaj. The group added four more primary wins down-rank, including Kristin Richardson Daniels overtaking incumbent Bill Perkins — who held the first-round lead — in Central Harlem.

“The women really did take heed to so many of the things that we provided,” Buckner said. “Whether it was the mentors. Or the policy training. Or the ranked-choice voting strategy, and really came out on top.”

CORRECTION: Yvette Buckner is vice chair of the political group 21 in ’21, and Amelia Adams is chair. A story in the July 15 edition reversed their roles.