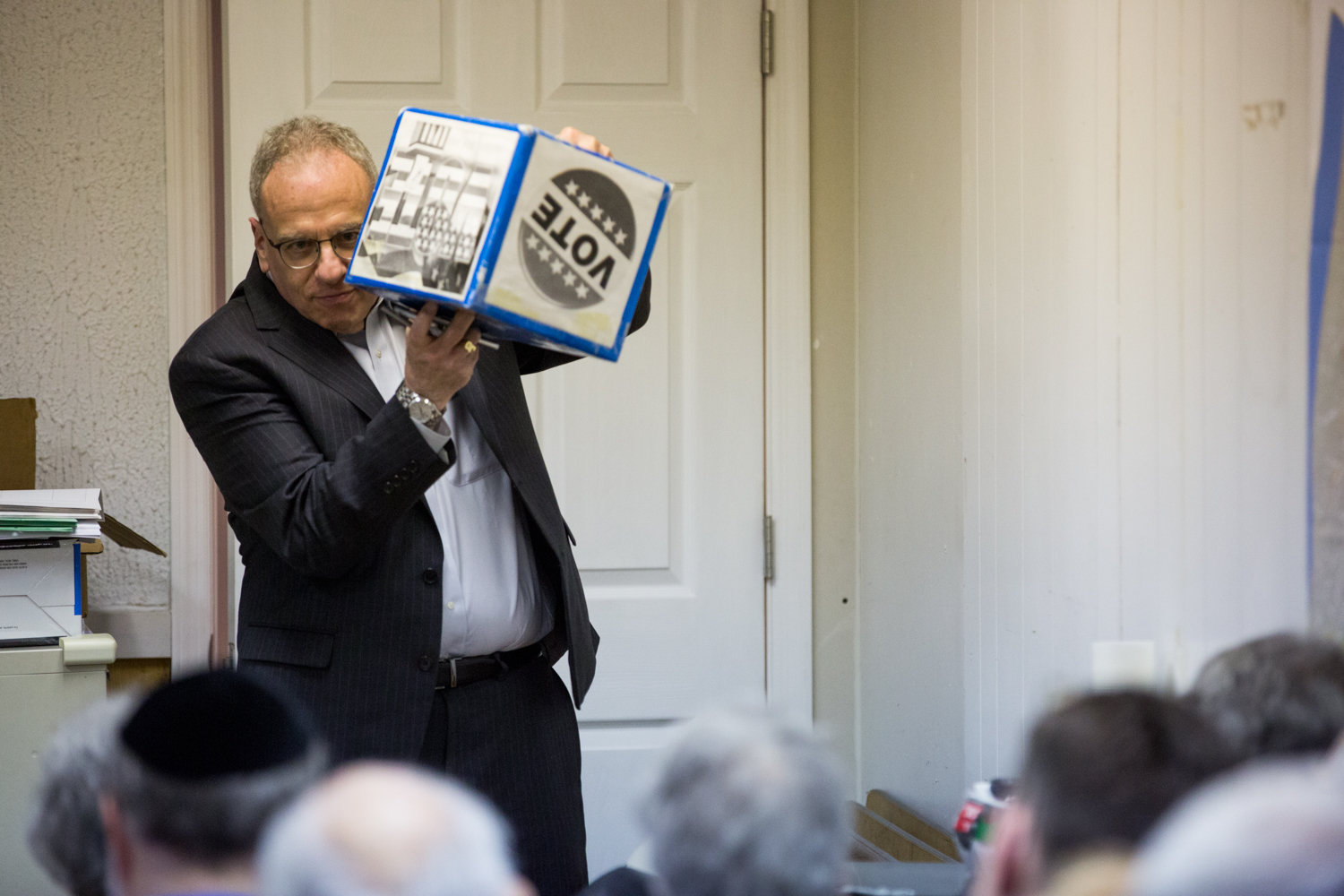 Assemblyman Jeffrey Dinowitz shakes a ballot box at a Jan. 15 endorsement meeting of the Benjamin Franklin Reform Democratic Club. The state lawmaker has tremendous influence on one of the borough’s oldest and biggest political clubs, but said he did not retaliate against state Sen. Gustavo Rivera for his backing of a leadership change at the club.
JULIUS CONSTANTINE MOTAL 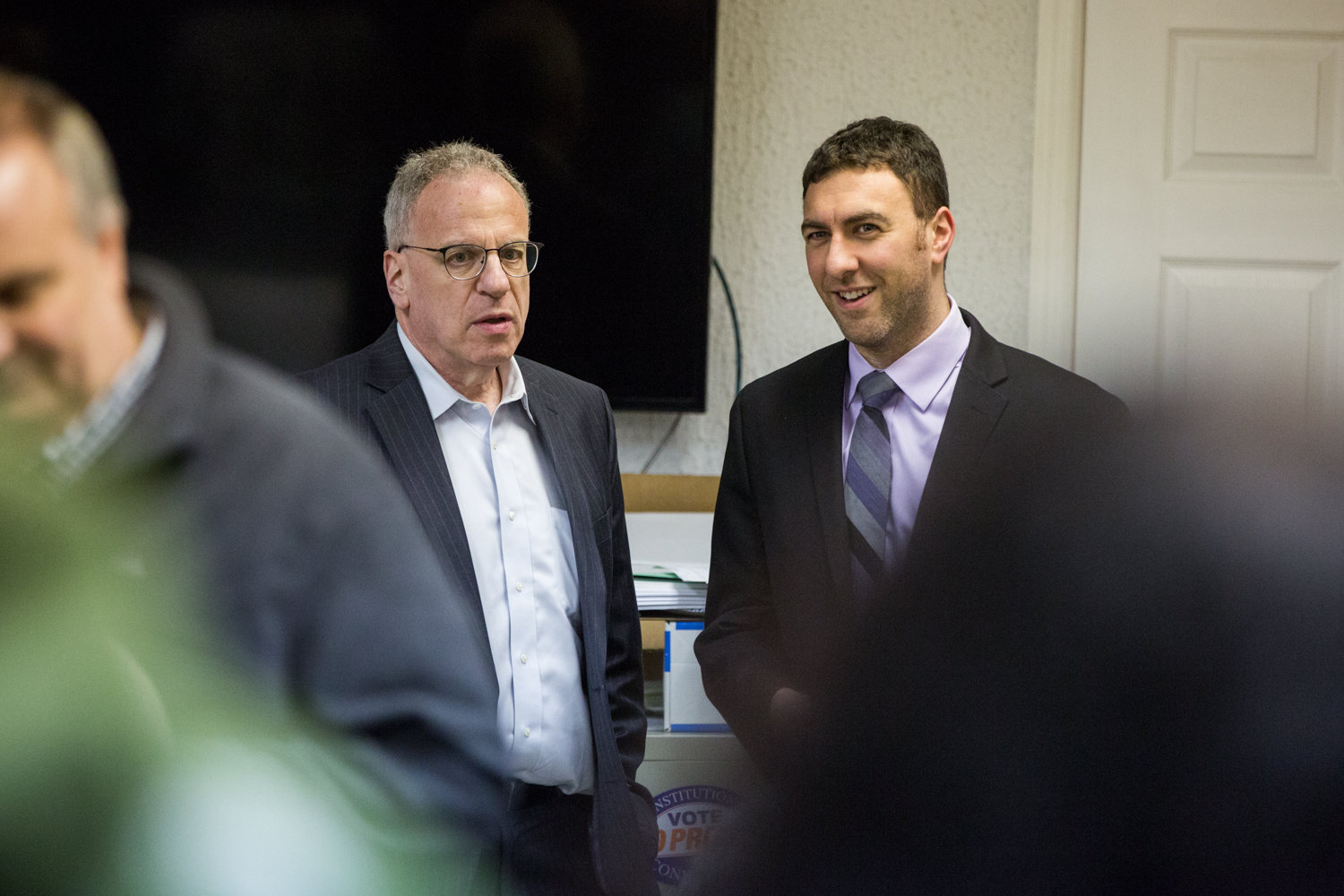 Assemblyman Jeffrey Dinowitz, left, talks with his son, Democratic district leader Eric Dinowitz, ahead of the start of a Jan. 15 endorsement meeting at the Benjamin Franklin Reform Democratic Club. The younger Dinowitz was one of at least three people with direct connections to his father who served on a small nominating committee choosing to keep the current club leadership in place. Also on that committee was Jeffrey Dinowitz’s chief of staff Randi Martos and a predecessor of hers, Bill Weitz.
JULIUS CONSTANTINE MOTAL 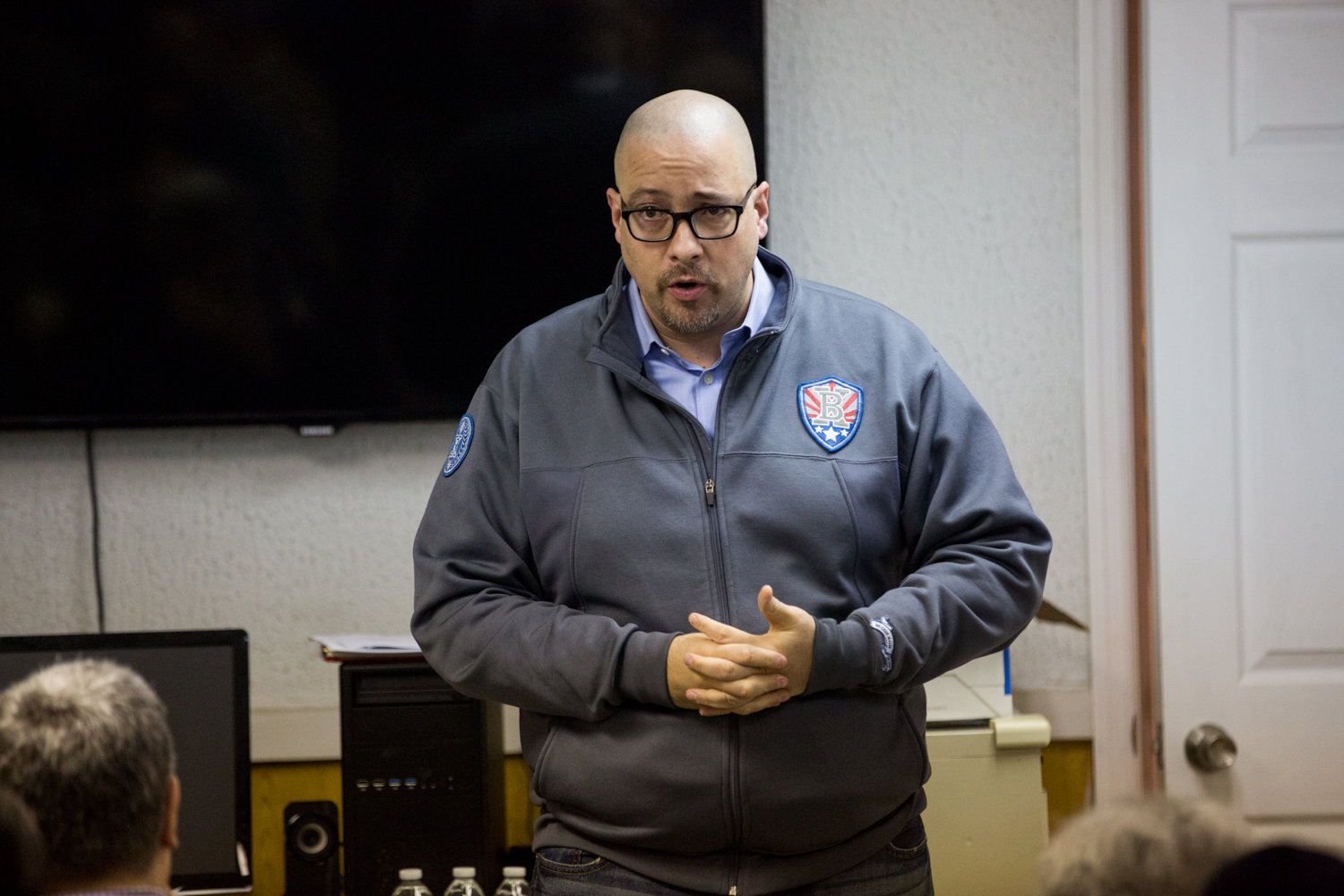 State Sen. Gustavo Rivera makes the case for himself at a Jan. 15 endorsement meeting of the Benjamin Franklin Reform Democratic Club. Rivera narrowly won the club’s endorsement by five votes, which came after he informed Assemblyman Jeffrey Dinowitz he was backing a slate of candidates led by Morgan Evers challenging the club’s current leadership.
JULIUS CONSTANTINE MOTAL
Previous Next
'Rebel' Sen. Rivera wins club's nod — but just by a whisker

What should have been a routine night earning an endorsement in front of the Benjamin Franklin Reform Democratic Club last week was anything but for state Sen. Gustavo Rivera.

The senator, whose district touches some parts of the northwest Bronx, made his presentation in front of nearly 100 club members at its West 231st Street storefront meeting space, and nothing seemed to be amiss. That is until votes were counted, and Rivera earned nomination — by a slim margin of five votes. A colleague in the upper chamber, Jamaal Bailey, had a much different result in his vote, winning endorsement by 69 votes.

The only major difference between both senators this particular evening, however, was that Rivera had decided to back a slate of “alternative” candidates looking to replace the current leadership at the Ben Franklin Club. That support wasn’t publicly known at that point, except Rivera had informed Assemblyman Jeffrey Dinowitz — an elected with a deep reach into the Ben Franklin Club — the weekend before.

After the vote, Rivera hesitated connecting his disclosure to Dinowitz and almost losing the endorsement from a club the Assemblyman has tremendous influence over.

“You’re going to have to ask the people who voted against, what was it, 36 people?” Rivera said. “As I always do, every two years, I go before my constituency — whether it be folks in that club, or folks in my block — and I say, ‘This is what I’ve done for you in the last two years, and I would be honored if you would give me an opportunity to continue.”

Bruce Feld, a past president of the club who ran the endorsement meeting in the absence of current president Michael Heller, described Rivera’s position supporting other candidates in an open election for club leadership as “disloyal” to the Ben Franklin Club itself.

Dinowitz, however, said despite the fact he was one of just a handful of people who knew before the vote Rivera was supporting a leadership change at the club, he had no direct role in organizing an opposition vote against Rivera.

“There was no retaliation on my part,” Dinowitz said. “I can assure you that if I wanted to make calls and get out the vote, (Rivera) would not have been endorsed.”

While Biaggi admits that supporting a slate that is not supported by Dinowitz could damage that relationship, she also strongly hoped that it wouldn’t.

“I actually love working with Dinowitz,” Biaggi said. “He’s one of the most productive and hardest workers in the Assembly, and it’s a pleasure to work with him because he takes his work seriously.”

Dinowitz said that, at least for him, nothing has changed in his relationship with Biaggi.

Tucked along a side street just off Broadway, less than a block from the 50th Precinct’s headquarters, Kingsbridge Social Club has become a hotspot for local electeds and many of the politicos who follow them.

Away from the dense jungle of tables and the impossible-to-miss wood-fired oven in the main dining room, many have found refuge in an enclosed outdoor area, enjoying just enough solitude to hash out strategies and build alliances. Or on this one particular night last week, regroup after narrowly averting what could have been a harsh blow to a campaign they hope might forge a new path for politics on this side of the Bronx.

“I can’t believe they did it,” one of them exclaimed after a couple big gulps of her beverage. “What are they scared of? We’re not looking to push anyone out, but that’s what everyone is being told.”

This informal gathering of just a few members of the Benjamin Franklin Reform Democratic Club had just that evening made it clear they were backing a proposed leadership slate that would replace the current one led by Michael Heller and deputies Bruce Feld, Heidi Schwartz and Daniel Johnson. They’ve instead put their support behind a team led by schoolteacher Morgan Evers, former law school dean Ellen Chapnick, lawyer and city council candidate Dan Padernacht, and marketing analytics consultant Aaron Stayman.

This alternative slate, as it was informally dubbed earlier that evening, earned a public endorsement from two state senators — Alessandra Biaggi and Gustavo Rivera. The problem? Rivera was up for endorsement that evening, and in a highly unusual move, the Ben Franklin Club membership nearly chose “no endorsement” over him in an uncontested primary race for his seat.

Evers and her team had made it a point not to publicly disclose Rivera’s backing until after his endorsement vote. But the cat already had been let out of the bag a few days earlier when Rivera gave Assemblyman Jeffrey Dinowitz — one of the key figures in the Ben Franklin Club — a heads up that he was not going to support Heller and his team for re-election.

By Wednesday, word of Rivera’s “disloyalty” — as past president Bruce Feld would later describe it — had spread enough to where 36 voting members of the club, with no warning, voted not to endorse Rivera in this year’s election. Fortunately for the senator, 41 others voted for his endorsement, leaving the support of one of the borough’s largest and oldest political clubs intact.

Dinowitz was surprised to learn Rivera was pushing for new leadership of the Ben Franklin Club, but he wouldn’t endorse Feld’s summation of Rivera’s actions.

“I don’t like words like that,” the Assemblyman told The Riverdale Press a few days after the meeting. “He had told me he had met with Morgan, and I know Morgan and I like her. I was just a little surprised that he made such a commitment to get involved with club elections for one particular side without talking to anybody else first.”

In fact, that’s what Heller said disappointed him the most — not having a chance to plead his case to someone like Rivera ready to publicly throw their political weight behind a candidate for his club’s presidency.

“He has, in effect, turned on a group of people who have campaigned vigorously for him over many years,” said Heller, a public relations strategist who, for a brief time, served as the district manager for Community Board 8.

“He suddenly lines up with a group of people who have no track record in our club.”

But that’s where Evers disagrees. She admits it wasn’t that long ago her primary focus was raising her young family while pursuing a career. But when Alessandra Biaggi announced she was challenging Jeffrey Klein for his state senate seat in what many believed was a long shot bid to overthrow one of the borough’s most powerful politicians, Evers knew she had to get involved.

“I’m newer than others in all this, but I think that could be a great asset,” Evers said.

“There are some people in our club who have been involved for a very long time, and I don’t think that’s bad at all. But one thing I don’t think many of them realize is that with how things are set up now, it’s hard for many people — especially young people — to get involved.”

One problem is that many meetings and events happen during the evening, when many have to work. Evers says she wants to find ways to make many of the Ben Franklin Club activities accessible to everyone at different times of the day and different parts of the week.

She’s already part of the current club leadership as a member of its executive committee, and while normally she would have been happy working her way up from there, the 2020 presidential election simply made it impossible to wait.

Putting a Democrat back in the White House is exactly what Heller is focused on as well. And in a critical election like this one — looking not just at the Oval Office, but at Capitol Hill as well — experience is vital.

“When this whole thing is said and done, we need to come together to defeat Donald Trump,” Heller said. “I hope what this means is that we have a good pool of volunteers behind whoever the Democratic candidate ultimately is.”

But first, the Ben Franklin Club must decide Jan. 29 on who will lead the charge into the 2020 election season: Michael Heller, or Morgan Evers.

“I think Morgan is really passionate about democracy,” said Sen. Biaggi, who is publicly supporting the “alternative” slate Evers is leading. “She brings with her an understanding of the community and of the issues that so many residents in Riverdale face.

“She shared with me her vision of the club, which she hopes to make more inclusive, and to expand the membership to get young people more excited and involved. She wants to empower people who are part of the club, and to actually do things that are in-line with progressive values.”

Yet that’s already happening, Heller said. With a club that is always growing, changing and moving in new directions, having someone in charge with a broad understanding of the club’s overall history is essential.

“The membership is constantly in flux,” he said. “We have all kinds of different people from different groups with different interests. It varies over time, and is not static.

“There are a lot of people who are new to the organization, and we have proven to be open and inclusive. Our job is to get our candidates elected and re-elected, and that’s exactly what we’re going to do.”