Generous donors give family of slain officer a new home 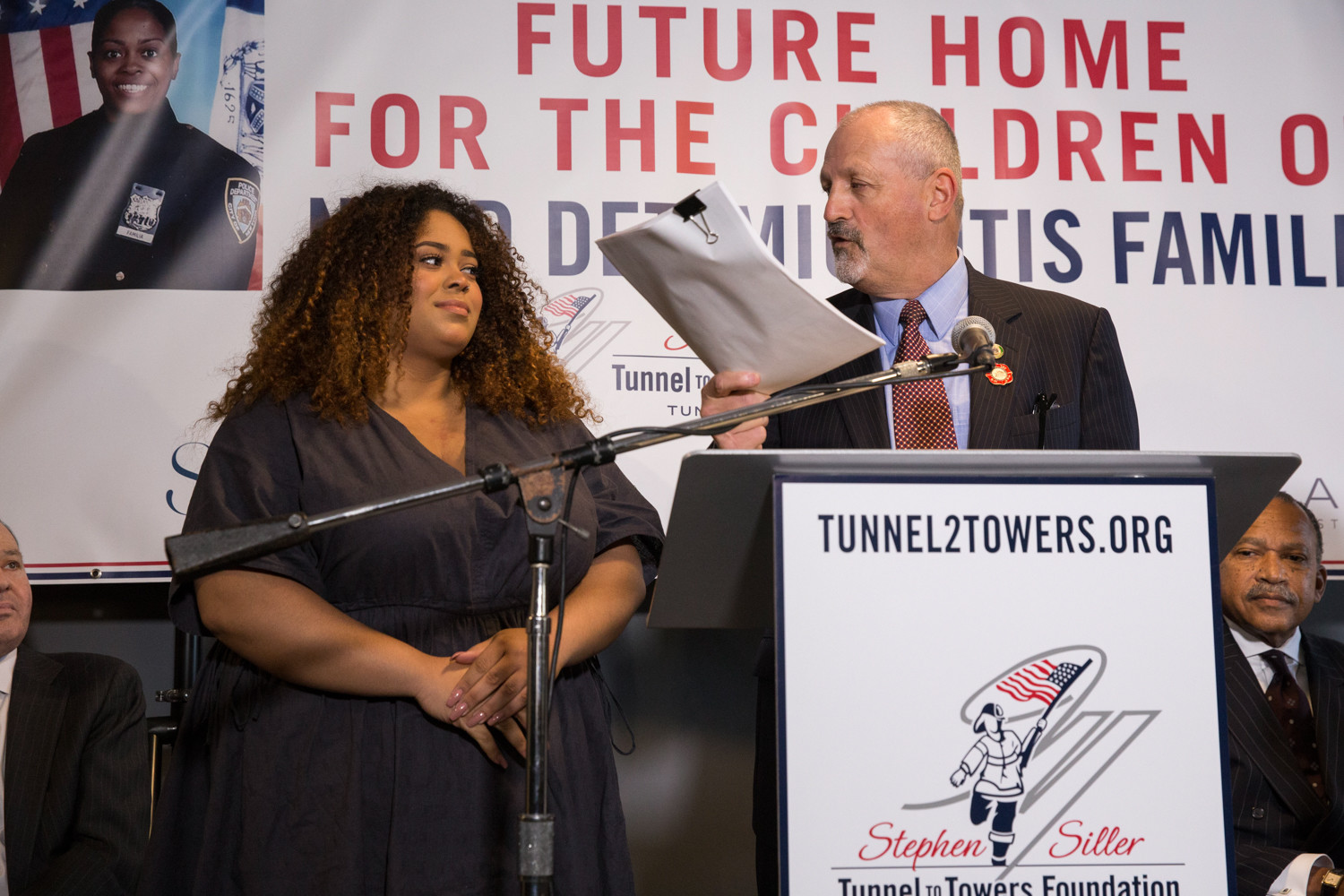 Frank Siller, chair and chief executive of Tunnels to Towers, hands Genesis Villella the signed deed to her family’s new home at Skyview-on-the-Hudson. Villella, and siblings Peter and Delilah, are the children of slain police officer Miosotis Familia.
Julia Sclafani 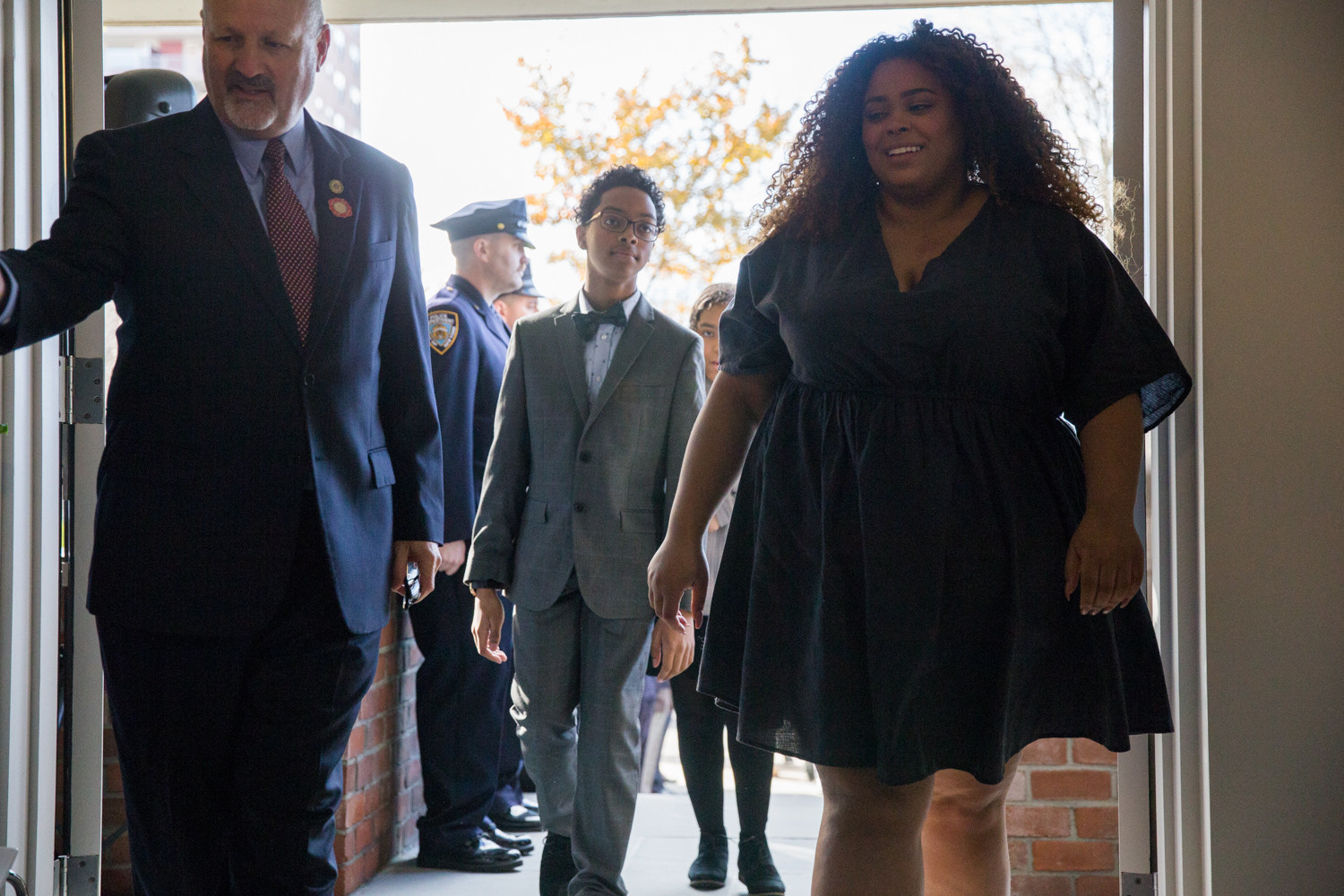 Genesis Villella, right, daughter of the late Miosotis Familia, walks into her new Skyview-on-the-Hudson home with siblings Peter and Delilah. They will move in officially Dec. 18 thanks to the efforts of the Tunnels to Towers Foundation.
Julia Sclafani 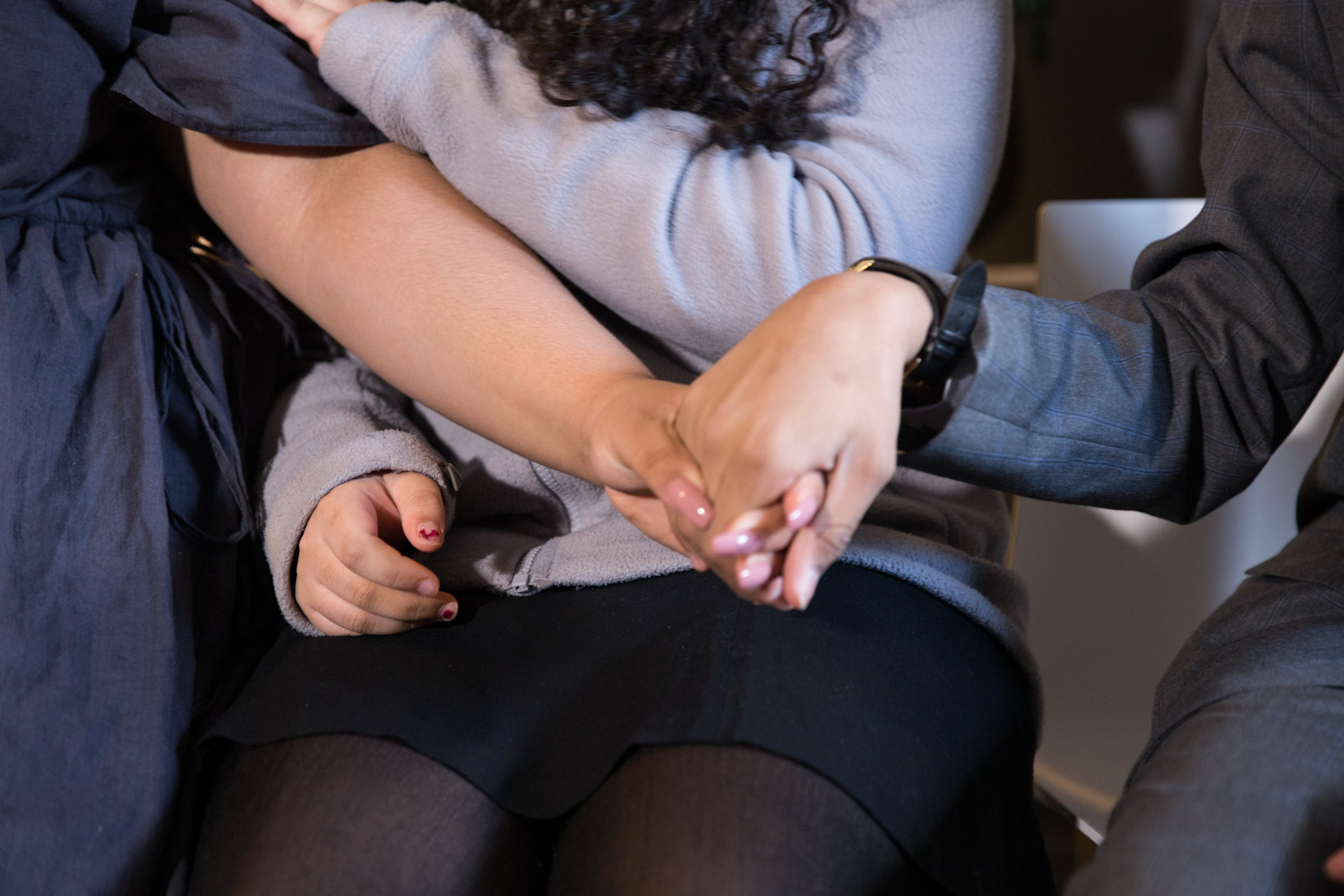 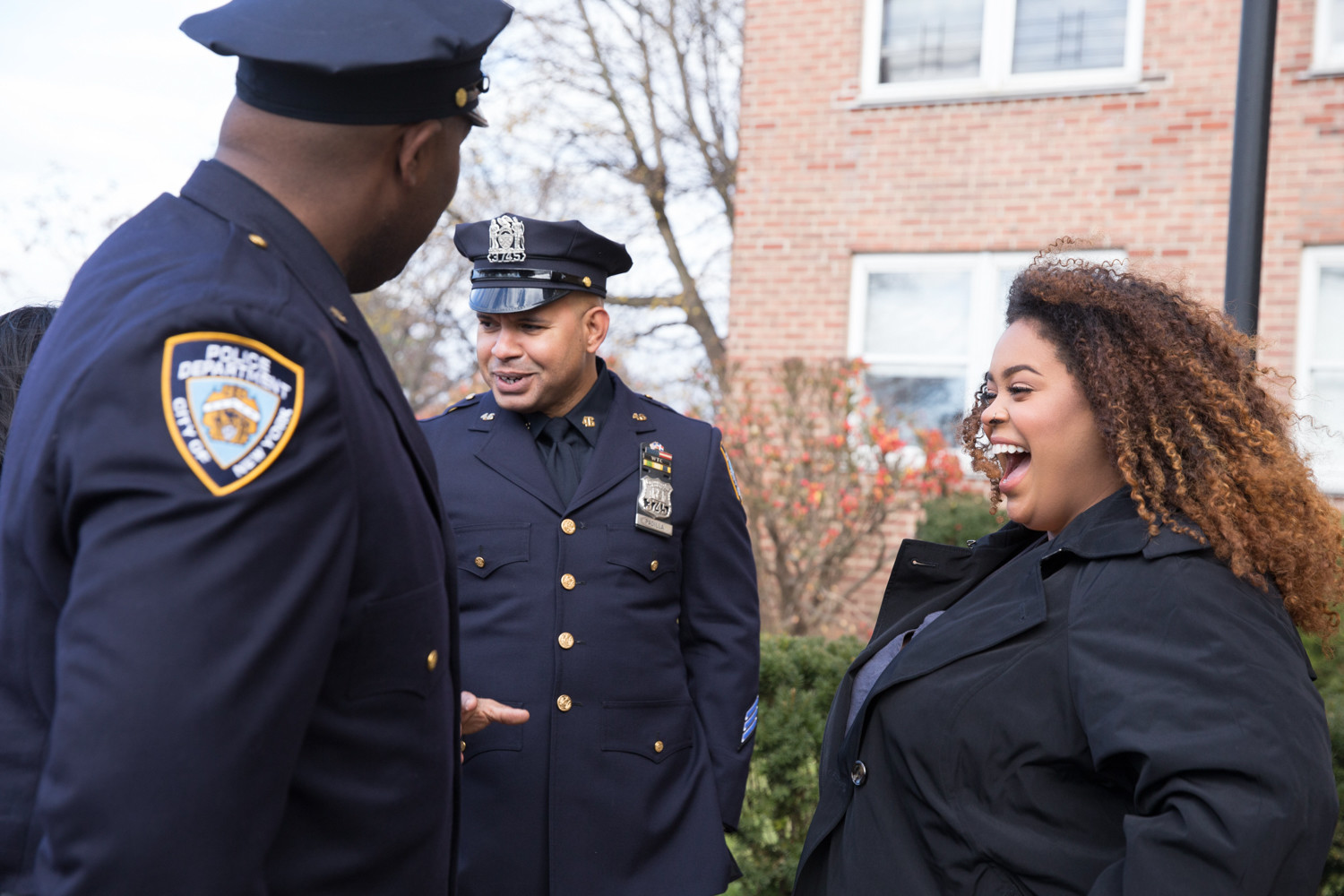 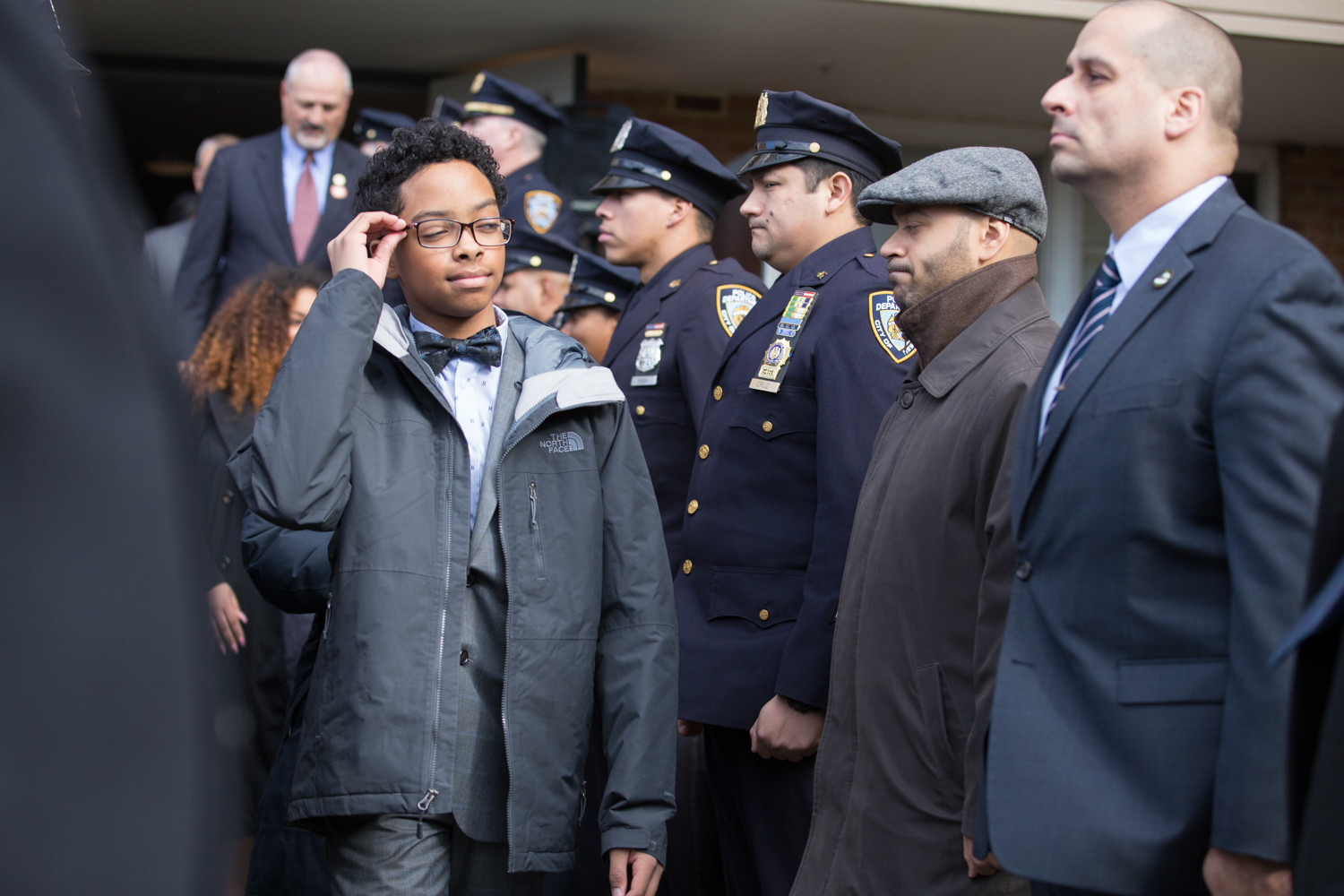 New York Police Department officers stand at attention as Peter Vega, son of the late Miosotis Familia, leaves a news conference where he and his sisters were given a home at Skyview-on-the-Hudson.
Julia Sclafani 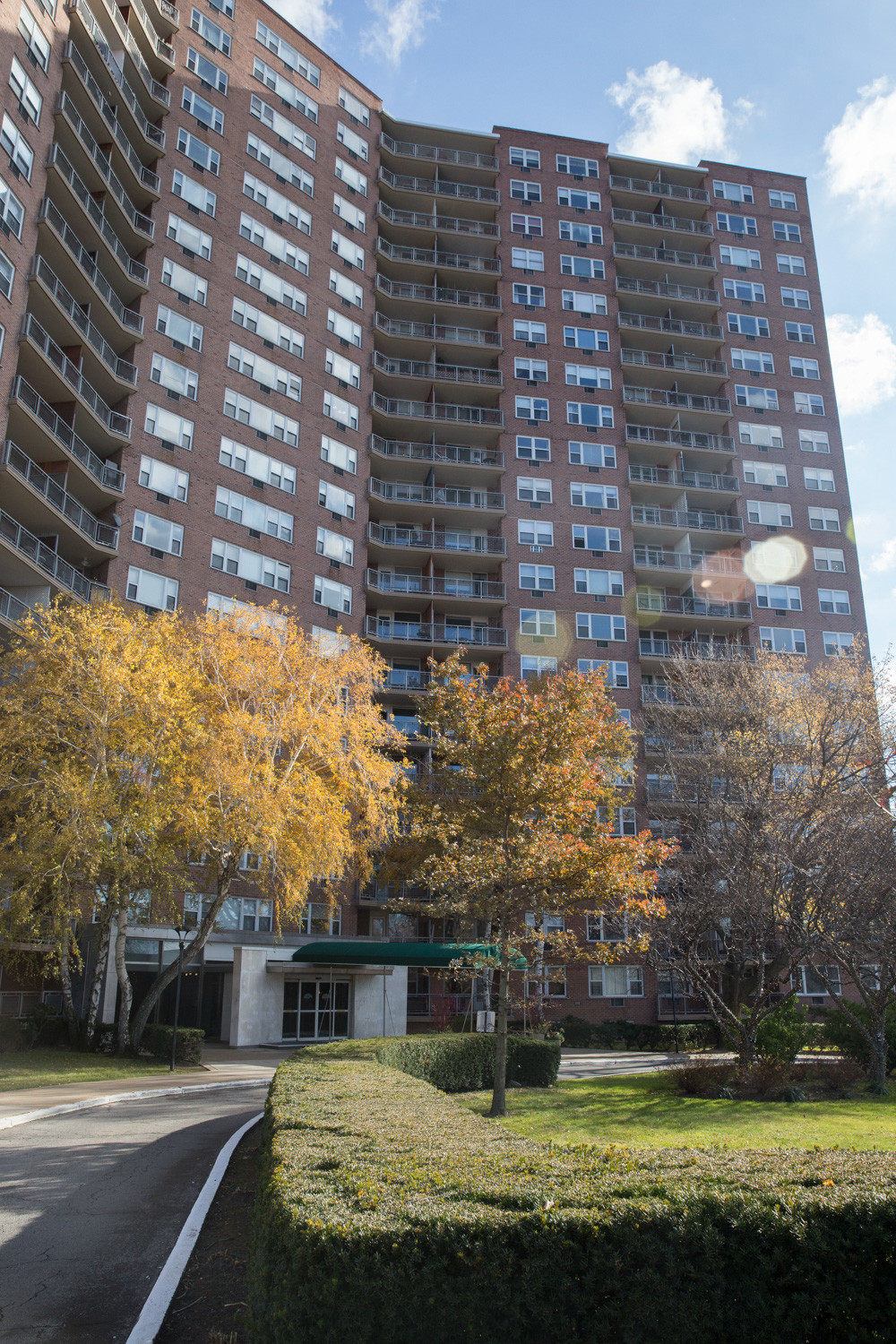 The children of the late New York Police Department officer Miosotis Familia will move into Skyview-on-the-Hudson on Dec. 18.
Julia Sclafani
Previous Next
By Zak Kostro

It was a beautiful, crisp fall morning. The skies were clear, and the December sun felt like it might be visiting from October.

Just as it has done for more than a half-century, the massive trio of towers making up Skyview-on-the-Hudson sits atop its throne overlooking Riverdale and a good portion of the Bronx.

But for once, attention wasn’t focused on the outside of Skyview — instead, it was inside as the co-op community welcomed its newest residents: Genesis, Delilah and Peter, the children of slain police officer Miosotis Familia.

It’s been five months since 34-year-old Alexander Bonds walked up to a police mobile command unit near the corner of Morris Avenue and East 183rd Street and opened fire, killing the young mother of three while she completed paperwork.

Living in their apartment at Shalom Aleichem Houses near Jerome Park Reservoir would never be the same without their mother — but now they won’t ever have to worry about where they’ll live again.

That’s all thanks to the Stephen Siller Tunnel to Towers Foundation, a Staten Island nonprofit which joined The New York Daily News and Skyview Apartments LLC to raise nearly $900,000 to buy the Familia children the co-op.

Genesis, 20, and 12-year-old twins Delilah and Peter will soon move into a three-bedroom, completely furnished and mortgage-free home. Just in time for Christmas.

“Days like this our foundation loves,” said John Hodge, the chief operating officer for Tunnel to Towers. “It embodies absolutely everything we stand for.”

The home is important to Familia’s children, especially since now Genesis has put her education on hold so she can take care of her brother and sister.

“Your mother was all about family,” Tunnel to Towers chief executive Frank Siller told Genesis, “and obviously, so are you.”

The co-op was purchased for $650,000, Hodge said, with surplus funds placed in a trust to cover maintenance fees and property taxes moving forward.

Frank Siller founded Tunnel to Towers in memory of his brother, Brooklyn firefighter Stephen Siller, who skipped a morning golf outing with his brothers the first moment he heard a plane had struck one of the World Trade Center towers on Sept. 11, 2001.

Even after he found out he couldn’t drive through the Brooklyn Battery Tunnel to reach that part of Manhattan, Siller strapped on 60 pounds of gear and ran through the tunnel to the twin towers, where he was later killed trying to rescue people inside.

The program now focuses on taking care of the families left behind by fallen first-responders — families like those of Miosotis Familia.

“I was shocked and saddened when I heard the news” of Familia’s death, said Myles Horn, a developer at Skyview.

But Horn never thought it would affect him personally. When he found out Tunnel to Towers was looking to find Familia’s family a new home, he knew he could help.

“In the business, we’re always finding people homes,” Goldy said. “But when you have a family like this in extraordinary circumstances, it makes you grateful to be able to help.”

Once the right unit was chosen, Horn made sure all his efforts were focused on renovation so Genesis, Delilah and Peter could be moved in before the holidays.

“I can’t remember the last time I saw that many guys working in one apartment,” said Matthew Muller, Skyview’s construction director who oversaw renovations. “It was a madhouse over there. I’m really happy with my team. The master bedroom’s going to have a great closet, like an ‘L’ shape — tons of space.”

“The impetus was to really make it their own,” Muller said.

Benjamin Tucker, the NYPD’s first deputy commissioner, recalled when he first met the Familia children at the hospital after the Fourth of July weekend shooting.

“That was a signal to me of, even beyond the grief they were experiencing, that they were there together, holding hands, and clearly Genesis was the strength,” Tucker said.

“You should never forget that you are a member of the NYPD,” he added for all three children. “Not just the few folks here, but the other 36,000 officers and 17,000-plus civilians.”

From “virtually the first day,” The Daily News received correspondence from people all over the country who wanted to contribute, said its police bureau chief Rocco Parascandola. So a support fund was established, raising more than a quarter-million dollars.

As she was thanking everyone who helped make the home possible during the Dec. 1 news conference, Genesis began to break down.

“Something that our mom always made sure was that we were well taken care of,” the eldest daughter said. “I give my mom 110 percent credit for everything she’s done for us. She made the ultimate sacrifice. I’d prefer she had not done that, but I can’t change the past.

“I can only look forward and be prepared for the future that includes myself and my brother and sister Delilah. And I owe it to my mom to make sure that the three of us will be taken care of and nurtured and cared for properly in a loving and healthy environment where we can flourish — just the way that she wanted us to be.”