Gloves off for candidates in heated debate 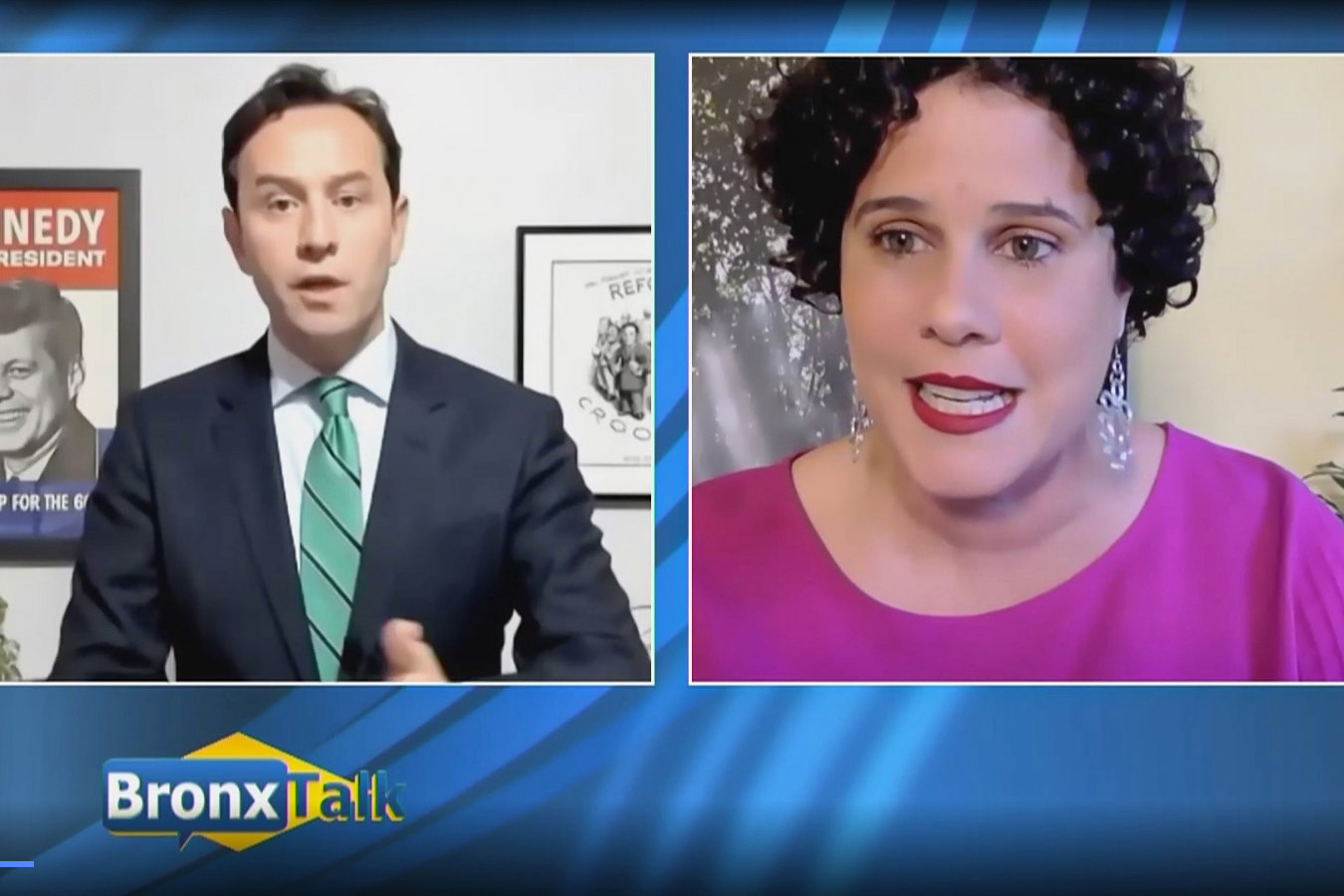 Attorney Dan Padernacht went after non-profit executive director Mino Lora for her $50 donation to former Independent Democratic Conference member Marisol Alcantara in 2018 during a recent BronxNet debate. Padernacht and Lora, along with four other candidates, are running in a June 22 Democratic primary to represent this corner of the Bronx for the next two years.
Courtesy of BronxNet 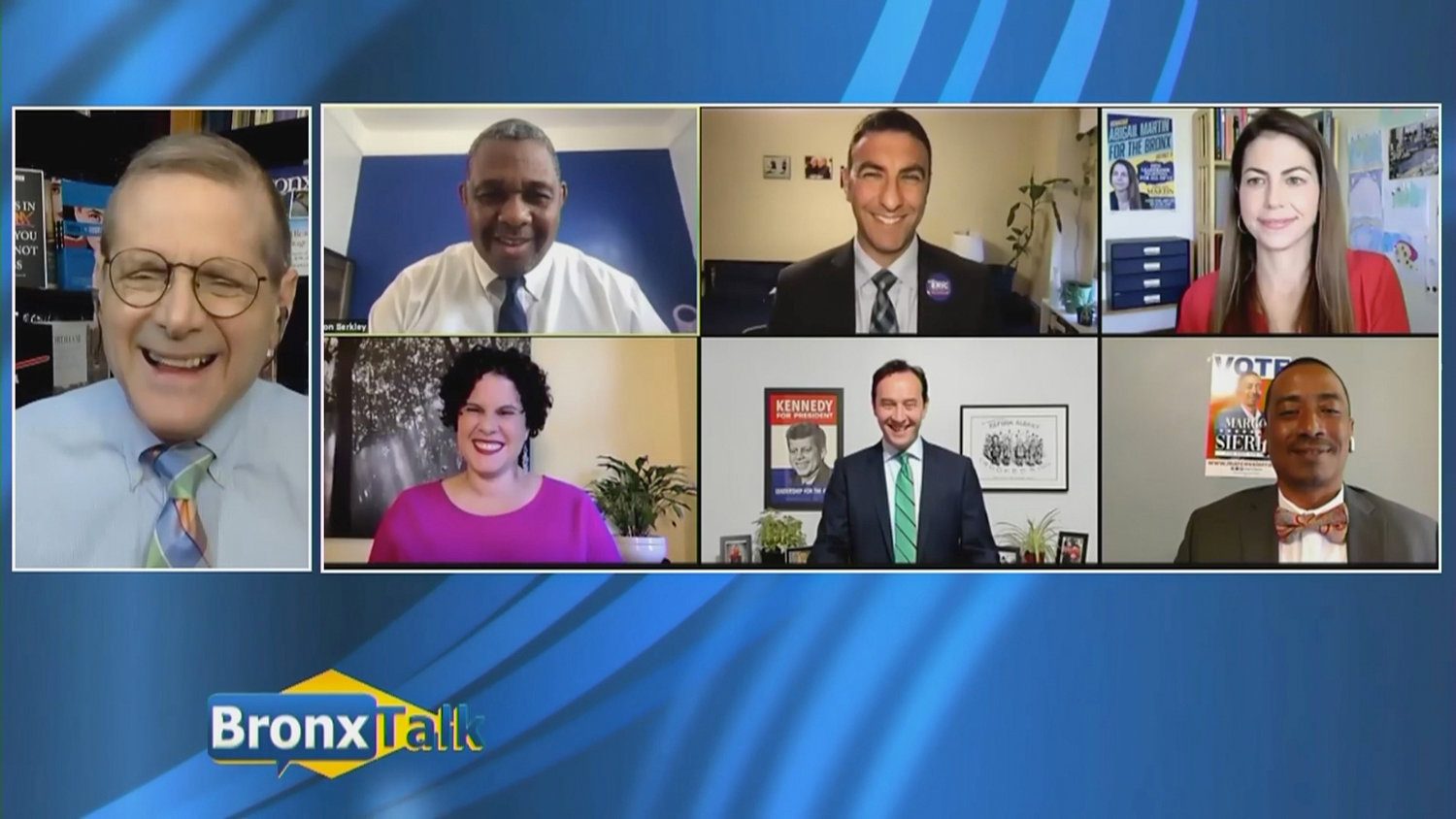 The six candidates vying to represent this corner of the Bronx on the city council for the next two years took the gloves off in a recent BronxNet debate. Many criticized non-profit executive director Mino Lora for her 2018 small-dollar donation to former state Sen. Marisol Alcantara, and Councilman Eric Dinowitz for the role his father, Assemblyman Jeffrey Dinowitz, may have played in winning him a March special election.
Courtesy of BronxNet
Previous Next
By ETHAN STARK-MILLER

In the final weeks of campaigning, Mino Lora has faced the same question over and over from her competitors: Did she support the Independent Democratic Conference in 2018?

The answer from the Spuyten Duyvil non-profit executive has been a consistent “no.” But that hasn’t stopped Lora’s competitors from accusing her of backing the IDC — a breakaway group of state senate Democrats who voted with Republicans until they were dismantled just before election losses in 2018 — based on what some might say is scarce evidence.

The proof? A $50 donation Lora made to the 2018 campaign of Marisol Alcantara, a former state senator and IDC member. Alcantara represented upper Manhattan, where Lora’s theatre education non-profit is based.

Lora has consistently said she attended a Dominican women’s event Alcantara hosted in 2018, paying the suggested donation of $50. But that she never politically supported any IDC member, including Alcantara. On top of that, she didn’t even live in Alcantara’s district in 2018, and says she voted for Alessandra Biaggi over the leader of the IDC at the time, Jeffrey Klein. Biaggi beat Klein, helping to ensure there would be no resurgence of his Republican-supporting caucus.

Still, the question led to some fireworks at a recent BronxNet debate between Lora and five other candidates competing in the June 22 Democratic primary to represent this corner of the Bronx on the city council.

“The suggested contribution was $50,” Lora said. “I made that contribution. I never campaigned. I never petitioned. And I never voted for an IDC member.”

Lora finished second behind Eric Dinowitz in a March special election to replace Andrew Cohen, where just 10 percent of voters showed up to the polls. Through ranked-choice voting, Dinowitz ultimately won with 58 percent of the vote, with Lora receiving 33 percent.

Now Dinowitz has to not only beat Lora again, but four other challengers if he wants to keep his seat after the end of the year.

Lora’s competitors have called her a hypocrite for attacking Dinowitz over his support of Klein, while having made the donation to Alcantara.

“It’s a little bit unfair to go off on Eric for supporting the IDC when there is evidence out there that it appears as though you were supporting Marisol,” Sierra said.

Padernacht, however, says the real smoking gun is a series of social media posts from Lora during the 2018 election that appeared to support Alcantara.

Lora said she posted those tweets in her role as a non-profit leader responsible for working with local elected officials — in this case Alcantara. Furthermore, Lora noted her unwavering support by the Working Families Party, No IDC NY and Biaggi herself — all of whom worked to dismantle the IDC in 2018.

Dinowitz defended his support of Klein as the local state senator, but said he never supported the IDC.

Lora wasn’t the only candidate whose dirty laundry was aired out in this debate. Earlier on, Dinowitz was asked about the role his father — Assemblyman Jeffrey Dinowitz — and how the Bronx Democratic Party machine he runs helped him win the special election.

Lora worried Dinowitz’s close familial ties would prevent him from acting independently on the city council.

“This seat does not belong to one family, it belongs to the people of the Bronx,” Lora said.

“We have no evidence to say that you will stand up against your father as an elected official. As someone whose been elected to represent (us). It’s about checks and balances. It’s about democracy. And it’s about being accountable to the community.”

But Dinowitz insists there are key differences between him and his father, although he didn’t specifically name any.

“The reality is, I respect my father, I love my father very much,” Dinowitz said. “Sometimes we draw distinctions, and sometimes you actually want to work with local legislators.”

The focus, Dinowitz said, should be on the work he’s been doing for the district. Since taking office in April, Dinowitz has voted on some bills introduced before his election. He’s also served as a tour guide for a number of mayoral candidates who happen into the council district — including Eric Adams and Andrew Yang — sometimes switching hats from councilman to council candidate in the middle of the work day.

He’s also traveled around this part of the Bronx as councilman, holding outdoor office hours for constituents.

“I go all around the district to make sure people know that my office is open,” Dinowitz said. “I go right to where people are, to meet them where they’re at. To help them.”

Dinowitz emphasized he often holds these office hours in the district’s lower-income neighborhoods like Wakefield, Bedford Park and Norwood.

Berkley said he believes Dinowitz has good intentions, but living west of Broadway means he doesn’t really understand the struggles of the council district’s less-advantaged neighborhoods. In fact, Berkley said, there’s still great inequity between areas like Wakefield and well-off neighborhoods like Riverdale and Woodlawn.

The only way to remedy this inequity, Berkley said, is to have a council member from outside of Riverdale.

“I’ve visited Woodlawn and my doctor’s (office) in Riverdale,” Berkley said. “And when I go through those neighborhoods, and I talk to other people, those neighborhoods are not going through what the other five points are going through. And what I’m saying is that, for close to 50 years, every council person we’ve had has come out of Riverdale. What about the other sections? We need representation from there.”

Although she lives in Riverdale, Martin said she’s familiar with all parts of the district thanks to her time as a social worker.

“I’ve gotten to know every single neighborhood,”Martin said. “I think each neighborhood in this district has a lot to offer. And I think we can learn from each other and emulate things that work in some neighborhoods and bring them to others.”