Good news! Rosey’s shop is back 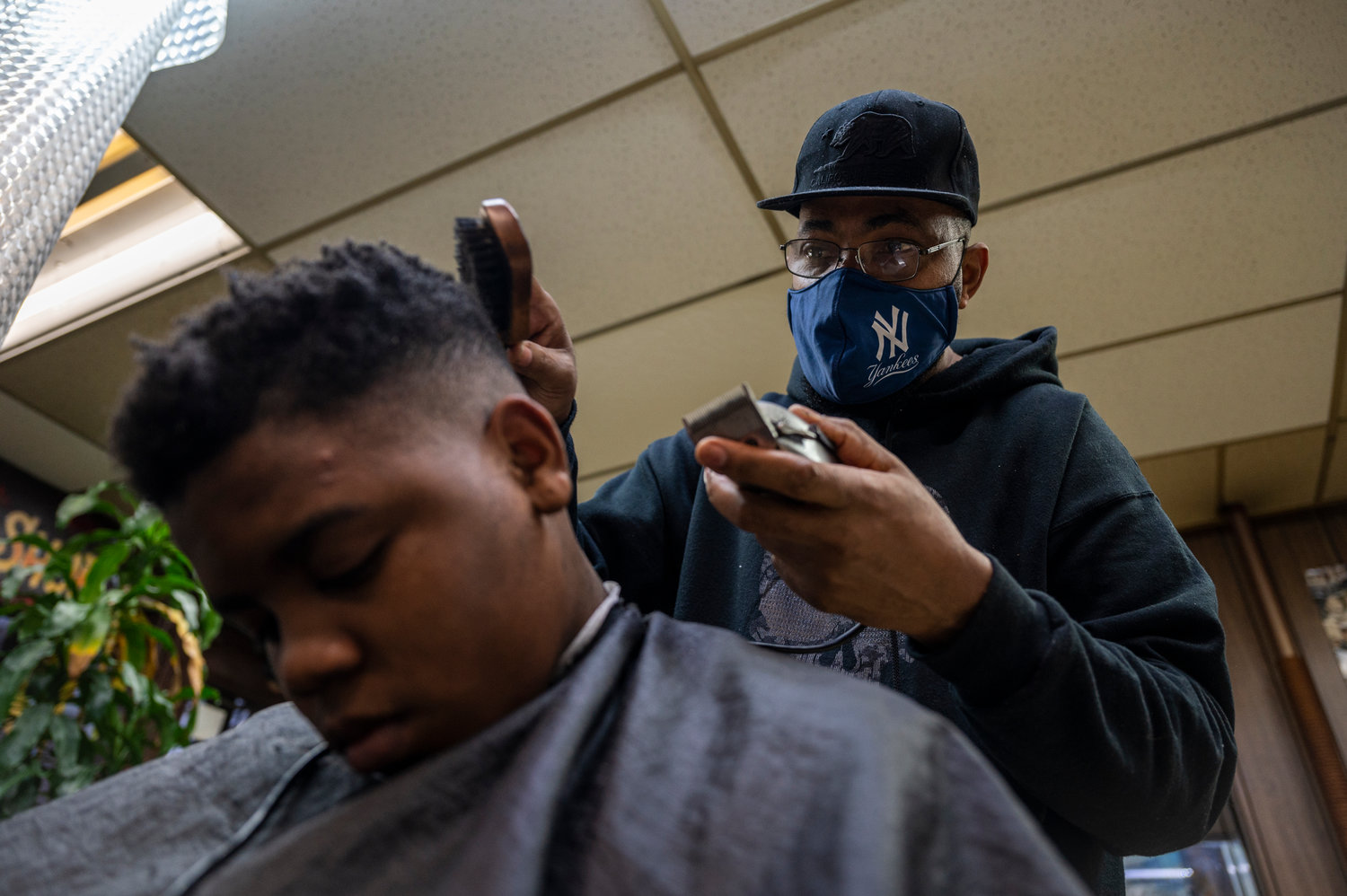 Marble Hill’s International Unisex Salon is taking a number of precautions to keep customers safe in the wake of the coronavirus pandemic, like masks, plastic dividers and limiting capacity. Last year, Spivey’s landlord tried to double his rent. But with some legal help, Rosey is staying, and so is his lower rent.
HIRAM ALEJANDRO DURÃN 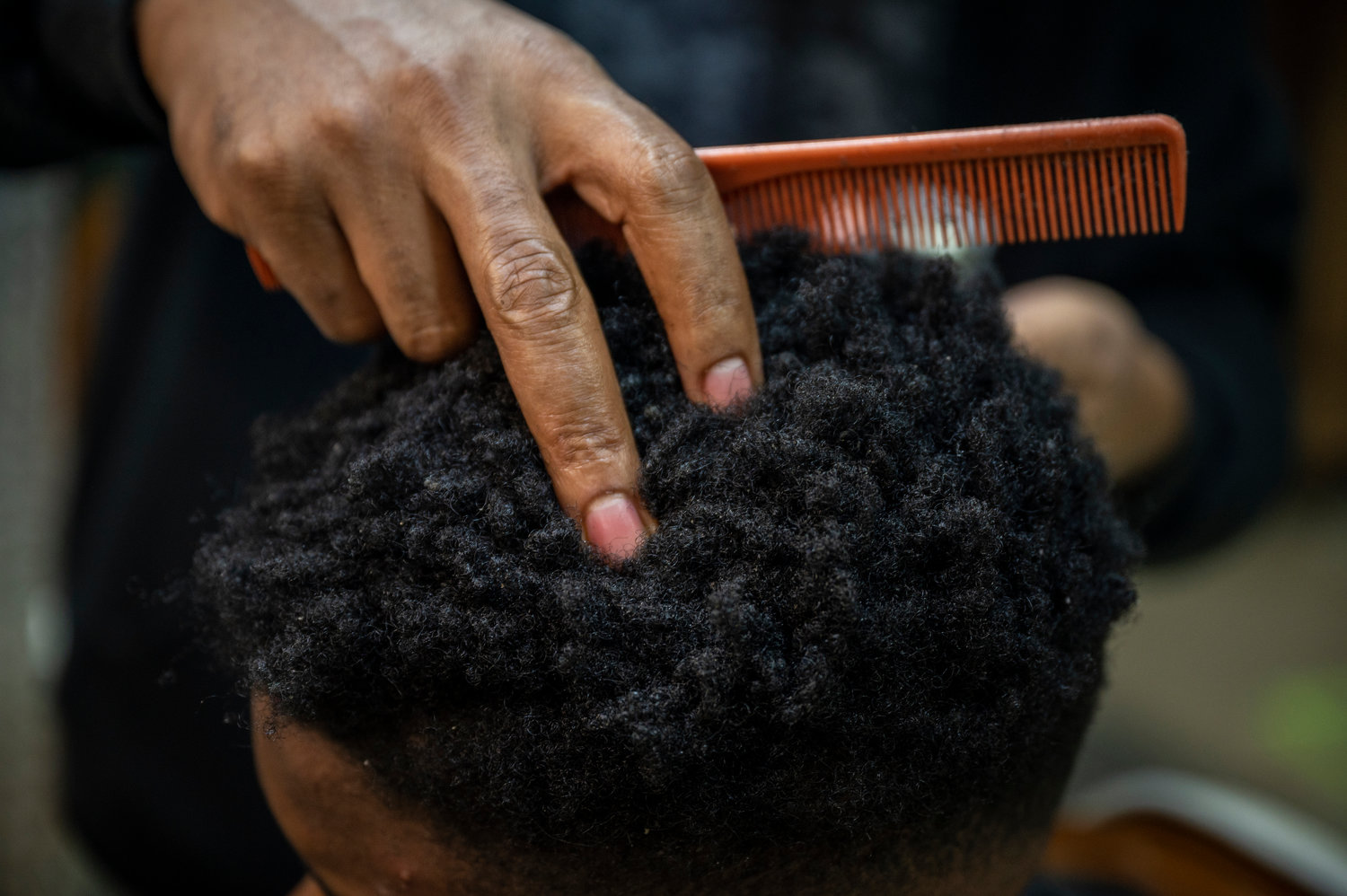 Business has been cut in half at Marble Hill’s International Unisex Salon, all thanks to the coronavirus pandemic. The landmark barbershop was also in trouble last year as well when Roosevelt Spivey’s landlord threatened to double his rent. Spivey ultimately won that battle, staying put for the same rent.
HIRAM ALEJANDRO DURÃN 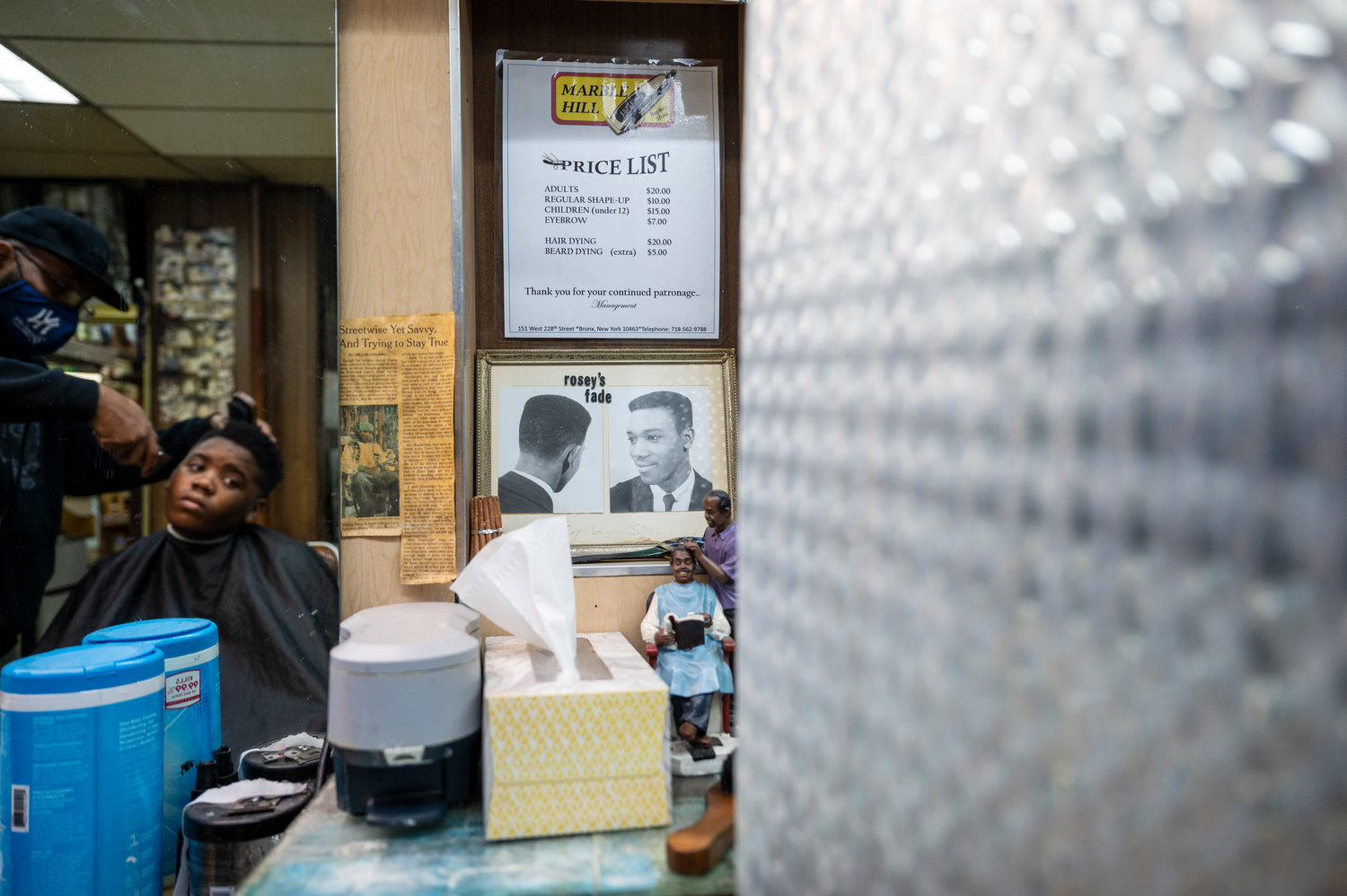 Rosey’s Barber Shop, an informal name for Marble Hill’s International Unisex Salon, has served the northern Manhattan neighborhood for nearly 60 years. Neighbors consider its owner, Roosevelt Spivey, a cherished member of the community. When Rosey’s landlord tried to raise his rent last year, that same community rallied around him, helping him fight to keep his shop.
HIRAM ALEJANDRO DURÃN 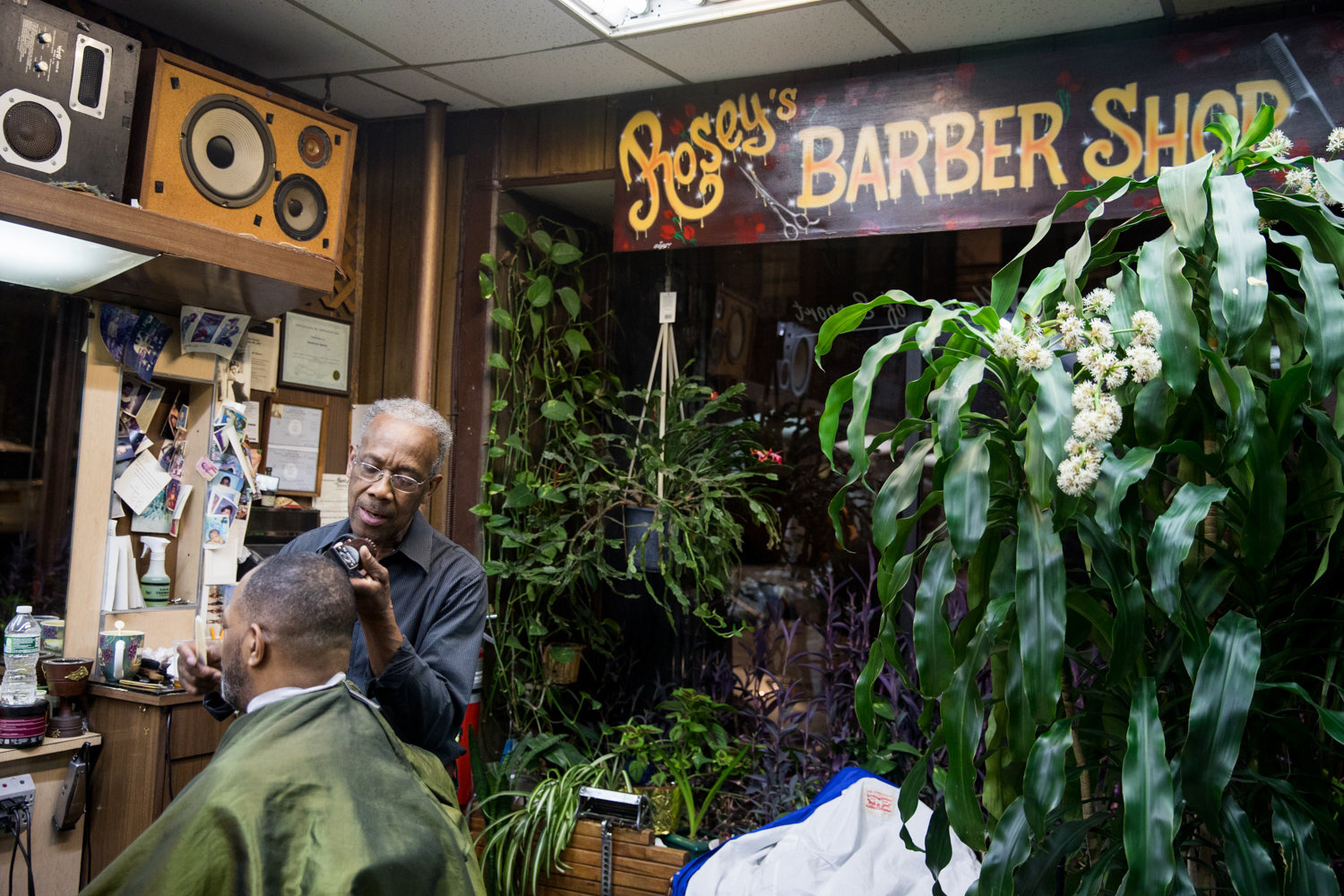 The Rev. J. Loren Russell has been getting his hair cut at Marble Hill’s International Unisex Salon since the ‘70s, with owner Roosevelt Spivey his barber for much of that time. Spivey is a master his clippers, which is what keeps Russell coming back. When Rosey’s business was threatened by a rent hike last year, Russell was confident Spivey would come out on top because the community was on his side.
JULIUS CONSTANTINE MOTAL/ File 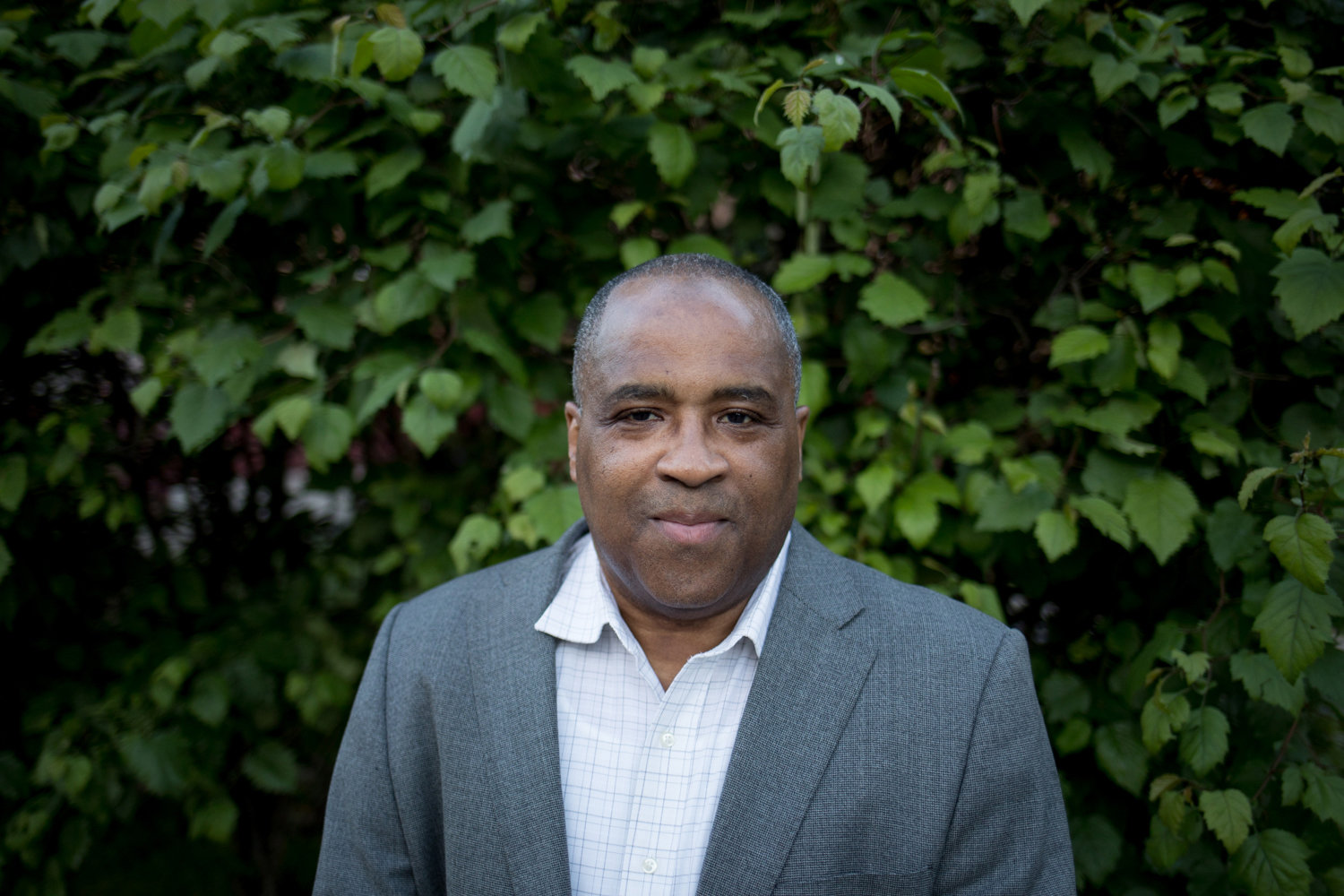 Tony Edwards, president of nearby Marble Hill Houses tenants association, got his first haircut by Roosevelt Spivey at Marble Hill’s International Unisex Salon some 60 years ago. Now in the 21st century, Edwards helped Spivey win a fight with his landlord over a rent hike last March.
JULIUS CONSTANTINE MOTAL/ File
Previous Next
By ETHAN STARK-MILLER

Roosevelt Spivey is a survivor.

He’s cut hair in his Marble Hill barbershop on West 228th Street for nearly six decades. And so far, no challenge has stopped Spivey — known by his friends and customers as “Rosey” — from doing what he loves.

It looked like things might be over for Marble Hill’s International Unisex Salon — or “Rosey’s Barber Shop,” as it’s informally called — last March when Spivey’s landlord threatened to double his monthly rent to $2,900.

“And I thought that was ridiculous because the shop couldn’t afford that type of an increase,” Spivey said. “That’s like a $1,500 increase in one shot.”

Yet, this is where a little bit of good luck — and Spivey’s survival instincts — kicked in.

Spivey didn’t have to look far for help. They were already there in his Marble Hill backyard. Tony Edwards, president of the Marble Hill Houses tenants association, helped Rosey find the right lawyer and navigate the overly complicated rent negotiating process.

“I’ll be 61 next month, (and he cut) my hair when I was 1 years old,” Edwards said. “That’s how far back I go with him. And over the years, he’s been very favorable to the neighborhood.”

Spivey also has congressional support from both the past and present — former U.S. Rep. Charlie Rangel, and his successor, U.S. Rep. Adriano Espaillat.

With the help of Edwards and others, Spivey hired the Manhattan-based law firm Golding & Associates, who ultimately took the landlord to court and successfully stopped the rent hike in its tracks.

Spivey wished he didn’t have to go that far with his landlord. But still, he was happy with the results.

“I felt very good about it because I really wasn’t ready to close down my business at that time,” Spivey said. “The neighborhood needs the shop there. They depend on the shop.”

Now an octogenarian, Spivey, has been in Marble Hill so long he’s cut hair for four generations of the same families. One loyal customer, the Rev. J. Loren Russell, said he knew Rosey would win the rent battle because his roots run so deep.

“He’s a cornerstone in the Marble Hill community,” Russell said. “And the court of public opinion is much more effective sometimes than even the court that you go to, to sit before the judge.”

However, like most small businesses, Rosey’s Barber Shop has fallen on hard times during the coronavirus pandemic. Spivey reopened his store last June after being closed for three months at the beginning of the COVID-19 crisis. Since reopening, business has been down more than 50 percent.

In order to maintain proper social distance in the small shop, only two customers are allowed inside at a time, Spivey said — one in the barber’s chair, and one in the waiting area. Everyone also wears proper protective equipment like face masks.

Despite his precautions, many of Spivey’s long-time customers have yet to return — and some will, sadly, never come back. A few moved out of the neighborhood while others passed away, including some from the coronavirus.

Walter Watson was one of Spivey’s long-time customers who talked to The Riverdale Press last year when Rosey’s landlord first tried to raise the rent. He died of complications from COVID-19 just two months later. Watson worked for the Metropolitan Transportation Authority for 20 years, most recently driving buses out of the Jackie Gleason Depot in Brooklyn’s Sunset Park.

Watson grew up in the Marble Hill Houses and spent most of his life in the neighborhood getting weekly haircuts at Rosey’s Barber Shop. Spivey was really sad when he learned of Watson’s passing.

“It was very shocking to hear because he was a nice healthy young man, we thought,” Spivey said. “I gave that man his first haircut. So, that’s what made me feel so bad, you know?”

Watson stood beside Rosey when he needed him the most.

“Unbelievable,” he told The Press at the time. “The man is a fixture in the community. What are they going to replace us with? Another doughnut shop or whatever? This place is a fixture to all the kids who’ve grown up here.”

Even during the pandemic, Rev. Russell makes a weekly stop at Rosey’s to get his hair cut. Russell feels safe there, virus or no virus.

He’s been going to Rosey’s Barber Shop since the ‘70s. While he’s never lived in Marble Hill, Russell is so loyal to Spivey he travels from Morrisania every week.

“He’s an expert,” Russell said. “He’s been there 50-plus years, so he knows what he’s doing. He can handle his clippers well.”