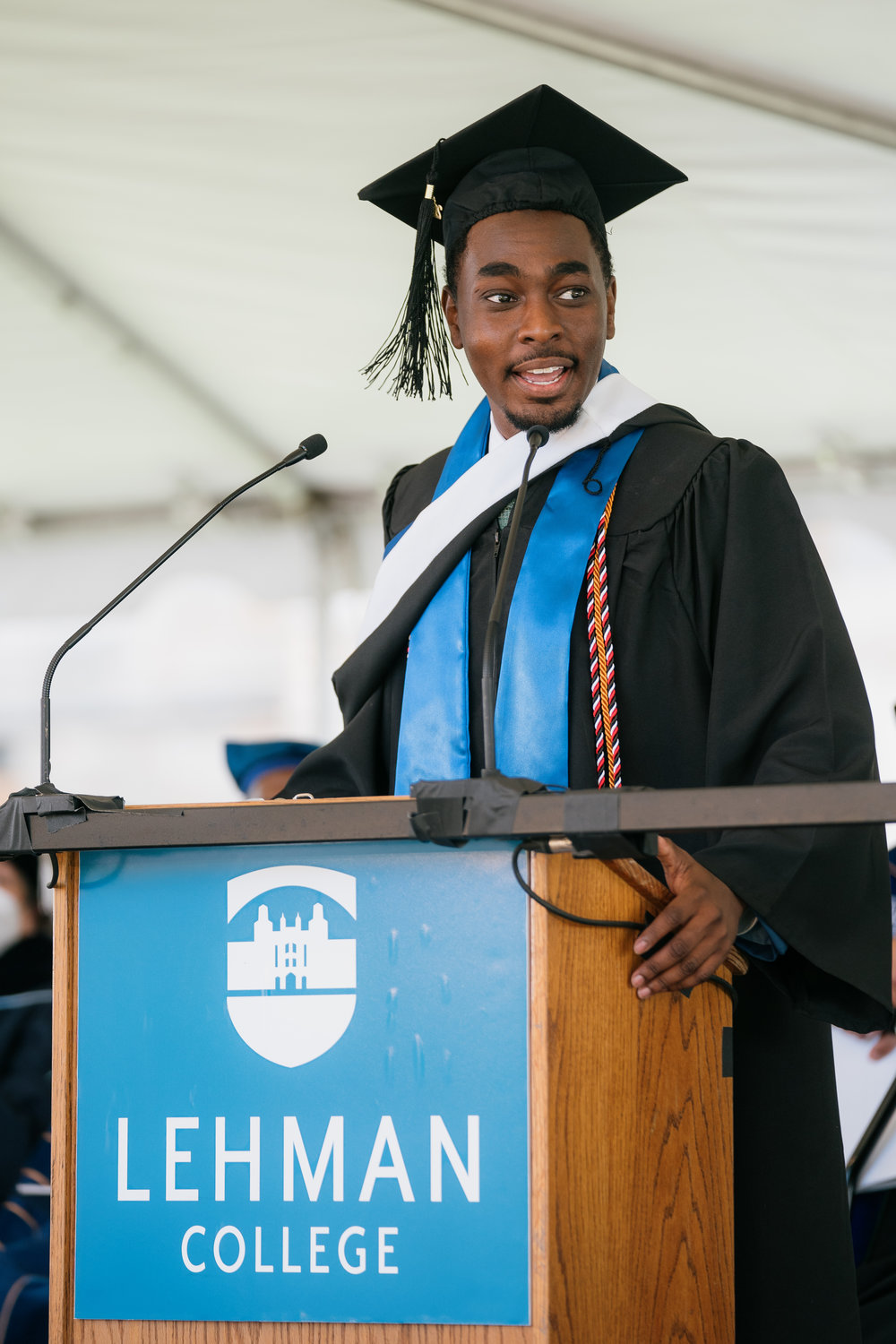 First-generation student Hussain Abdul says he was 'made in the Bronx.' Abdul received a baccalaureate degree in political science and was selected to be the student speaker to represent his graduating class.
Brian Hatton /Photo 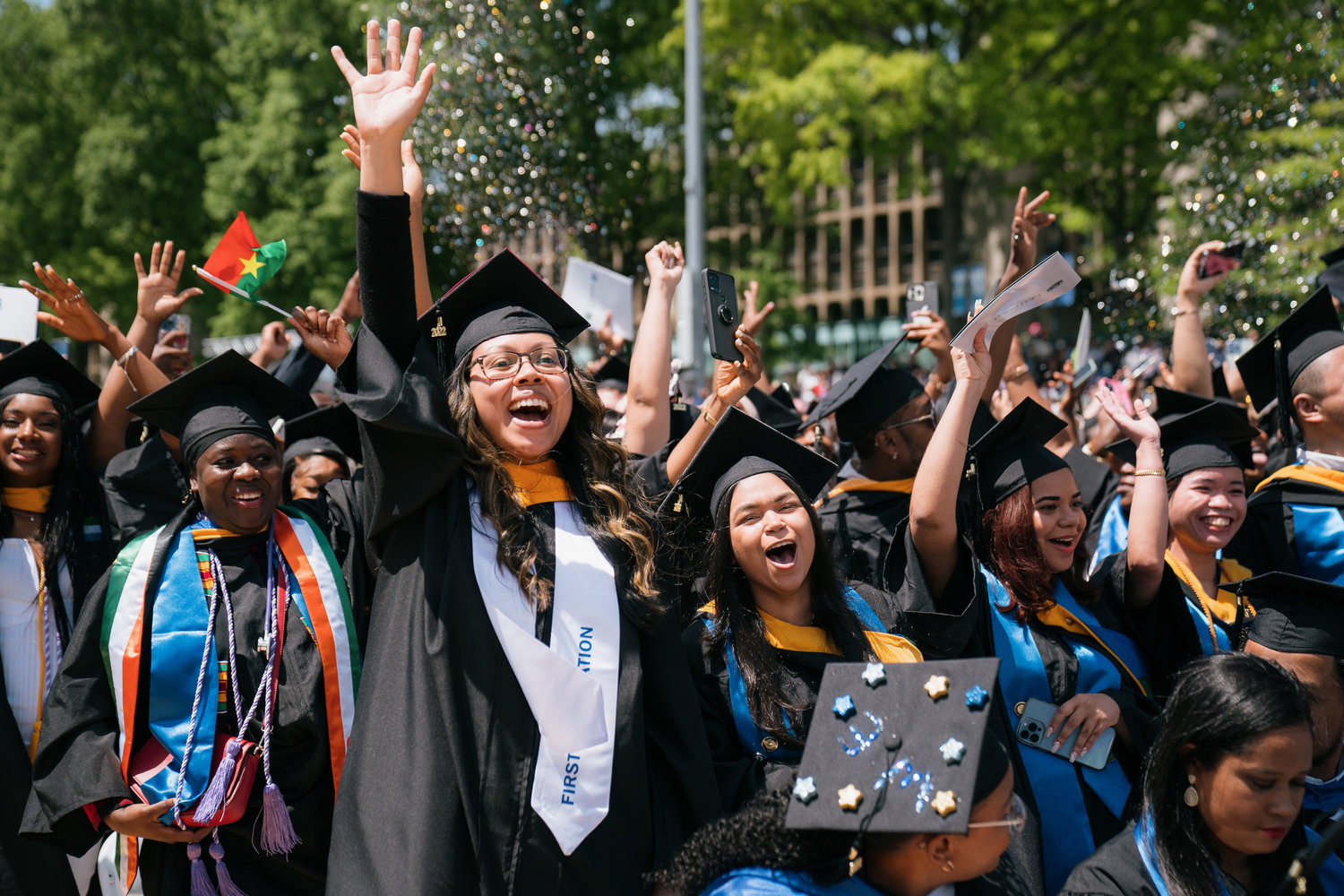 Graduates celebrate during Lehman College’s 2022 commencement May 26 on campus. The school was one of many CUNY schools to hold a live outdoor commencement for the first time since the coronavirus pandemic began.
BRIAN HATTON / Photo 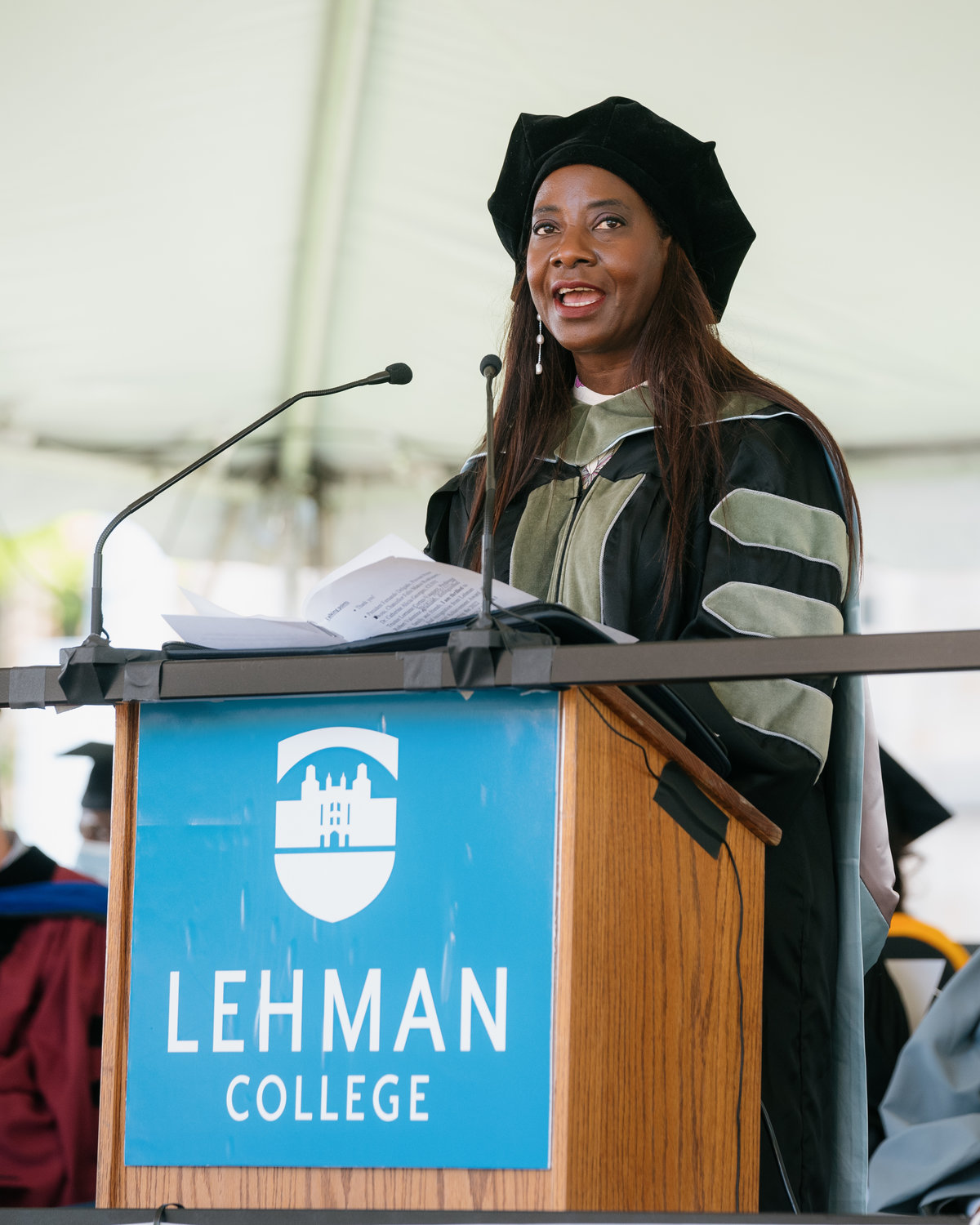 Sandra Lindsay, one of the speakers at Lehman College's 2022 commencement ceremonies May 26, told her story about being the first person to receive the COVID-19 vaccination in December 2020.
Brian Hatton / Photos
Previous Next

Being the first to accomplish something like completing a college education is a notable achievement.”
FERNANDO DELGADO, president, Lehman College
By STACY DRIKS

It was May, and it has been far too long since the public spotted a person donning a cap and gown walking down the street along with friends and family.

Throughout New York, a milestone was reached when in-person commencements received the green light.

On May 26, more than 3,600 Lehman College students walked on campus early morning in the blazing heat to celebrate their commencement — the first since 2019, when the coronavirus pandemic hit the Bronx.

“I am my ancestor’s wildest dreams, all of their hopes and all of their aspirations,” said Bronx borough president Vanessa Gibson, who is a first-generation graduate student.

“My parents told my siblings and me to go to college because that was the bar, our parents were immigrants — yes, they can cheer us on, but they could not guide us,” said  Lehman College president Fernando Delgado.

Student commencement speaker Hussein Abdul graduated with a baccalaureate in political science and told The Riverdale Press about his experience being a first-generation graduate student.

He said his parents were proud of him and couldn’t stop smiling from the excitement that he was the first in his family to graduate. His brother is next to graduate from Bronx Community College at the beginning of June.

‘I’ve been in school so long I ran out of financial aid,” Abdul said.

For Abdul to finish college, he needed money, so he took on a job. He didn’t want to put a financial burden on his parents.

As Lehman celebrated the class of 2022, it also acknowledged three pioneers who each played a role in the ceremony. Each woman received an award.

“I remember sitting in those chairs 12 years ago,” said Lindsay, best known as a critical care nurse and the first person in the United States to receive the COVID-19 vaccination in a non-trial setting.

“These graduates are here today with their family and friends, because of vaccines,” Lindsay said.

Before receiving the vaccine, she did extensive research on the developments and came to a conclusion and was confident that the vaccine was safe.

On Dec. 13 Lindsay picked up her phone and was asked by her chief nursing officer if she was still interested in receiving the vaccine. Lindsay responded without hesitation, “absolutely.”

“I showed up on Dec. 14, to get vaccinated, not knowing that I would be the first, none of us knew,” she said.

Lindsay learned she made history by watching the news — nobody told her in advance. She told The Press it didn’t register in her mind; she was so happy and thought it was a step closer to ending the pandemic.

She said in her keynote commencement speech that people thought she was bribed into receiving the vaccine. Her response was to learn how to stand up to challenges and stand up for herself and the nursing community.

“It’s important for me to reach and share my experience to communities and, to share how I got to trust everything,” Lindsay said, “Let them know that it’s real and to not be taken lightly that the way forward is to vaccinations.”

Lindsay currently advocates for vaccinations in underserved communities of people of color. She understands the people are afraid, but if they refuse to pull up their sleeve, Lindsay, please asks to take safety precautions.

Silvers received an honorary doctorate of science as she is legendary for her activist efforts to serve the community.

At the age of 63 she received her baccalaureate degree in labor relations through Cornell University School of Industrial Relations.

She no longer lives in the Bronx as she resides in Tennessee with her husband due to finances. However, she said in her commencement speech that she didn’t realize how much she missed the Bronx until this morning — commencement day.

“The Panthers were brilliant, wonderful, fine, submitted people who wanted to change society and to stop all the police brutality,” she said.

Silvers was a part of the Black Panthers Party in the late 1960s and fought to implement many programs.

“We started the free breakfast program because so many people couldn’t afford to give their kids breakfast,” Silvers said.

The Panthers cooked a nutritious breakfast that included milk, eggs, juice, oatmeal, and grits that were later expanded by the federal government and remain today. Pre-pandemic, the program fed 14.7 million students, according to the School Nutrition Association.

She became a member of the Young Lords Party — modeled after the panthers and founded by Puerto Ricans— and was responsible for demanding better conditions for everyone.

In 1970s, tuberculosis spread in the South Bronx, affecting almost everyone. The city stationed testing sites, yet, it was at the usual hours of the day and mainly when children were in school, and people were at work. The Young lords asked the city if the hours could be changed. However, the request was ignored, and the party took action and protested in Lincoln Hospital.

Silvers told The Press she witnessed people sitting in the hospital for over 72 hours. She shed an example — people who had the flu would be seen by a doctor before a patient with a gunshot wound.

This condition led to the Emergency Triage Program to help doctors separate patients who need critical care before minors.

“We were not able to address, although we did demand it, free, quality health care for everyone,” Silvers said.

However, the hospital did not meet the many demands that the Young lords requested. Yet, till today she is fighting for free health care. She believes with the help of others through a program, one day, it will be implemented in this country.

The hardworking business woman received the honorary doctorate of humane letters and gave her speech entirely in Spanish.

She is of Mexican descent and is the owner and head chef of La Morada in Mott Haven in the South Bronx,  which critics rated it award-winning.

While small businesses struggled during the pandemic Méndez struggled to stay open too.

Yet, that didn’t stop her from helping her community.

Méndez opened up her own food pantry and offered residents thousands of free meals.

Through her efforts Bronx hungry residents were not struggling to purchase food.