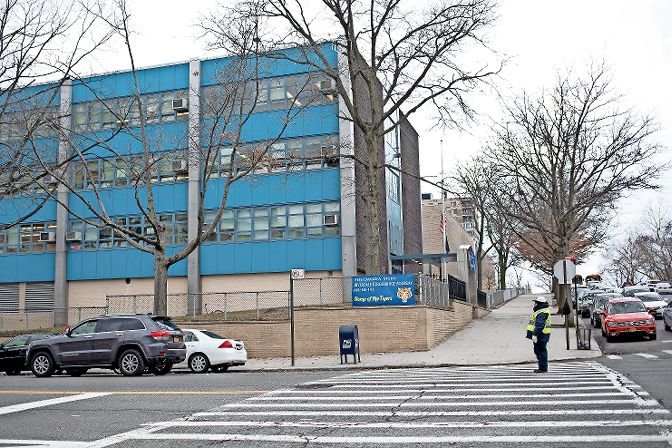 As schools look to reopen in the fall, administrators are getting creative with finding additional space for in-person classrooms. The ‘arcade’ at Riverdale/Kingsbridge Academy on West 237th Street would be an ideal space, but it’s currently under construction.
JULIUS CONSTANTINE MOTAL / File 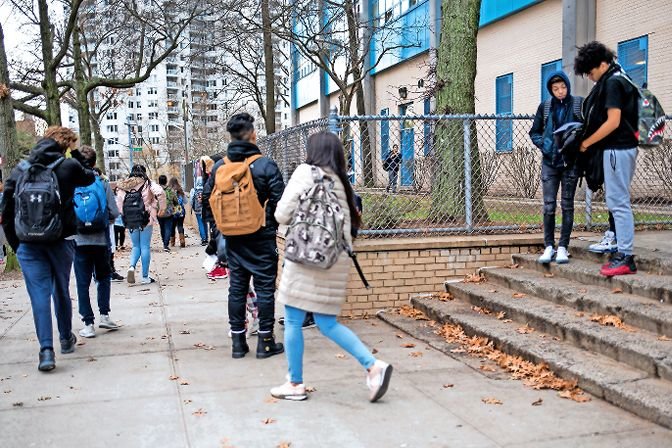 Assemblyman Jeffrey Dinowitz has said he searched for additional spaces that would be perfect for physically distant, in-person classrooms. With the beginning of the academic year just weeks away, time is of the essence.
JULIUS CONSTANTINE MOTAL / File 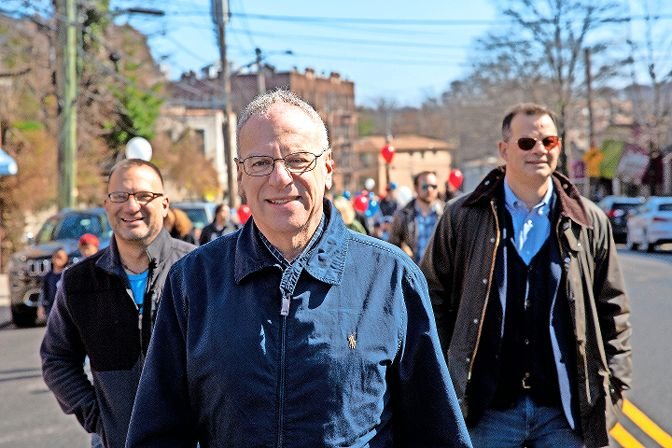 Students gather outside Riverdale/Kingsbridge Academy at the end of the school day back in life before the coronavirus pandemic. Scenes like this will be uncommon this fall as city schools try to enforce social distancing while ensuring as many students as possible can physically visit a
EIAN KANTOR / File
Previous Next
By ROSE BRENNAN

It worked great as an outdoor shelter for The Riverdale Y’s Sunday Market, but could the “arcade” at Riverdale/Kingsbridge Academy be enough to help get more students back into the classroom this fall?

Stacy Sewell doesn’t think so. She has a child entering sixth grade at the West 235th Street school this year, yet while the arcade might not be good for teaching, it could have other uses.

“This is a tremendous space that so many schools don’t have,” Sewell said. “The lunchroom is right inside from this arcade. Could you not bring the tables out so the kids can have lunch outside?”

Preparing for the upcoming academic year looks quite different this year compared to the past, the threat of the ongoing coronavirus pandemic forcing administrators to search for more space to accommodate students in all aspects of school life that marries both social distancing and education.

The task is proving a bit more difficult than expected, especially when perfectly adequate spaces for these alternate sites exist, but can’t be used for one reason or another.

One such space is RKA’s “arcade,” an outdoor but sheltered area. It’s also quite large, which could allow for physical distancing.

But there’s a problem with using the arcade space — and it’s not because it’s outside. Since April, the area has been covered in scaffolding as part of ongoing renovations at the school. That has rendered this area inaccessible to the RKA community, and even prompted the Sunday Market to pull up stakes and relocate to the parking lot of Riverdale Temple on Independence Avenue.

If there is an end in sight for the scaffolding to go away, Sewell isn’t seeing it. In fact, she lives across the street from RKA and has kept tabs on the status of the school’s arcade. As far as she can tell, there has been no construction or movement at the site for several months.

“It’s just astonishing to me that the principal mentioned we have the arcade, but we can’t use it,” Sewell said. “It just infuriated me.”

The School Construction Authority says the arcade scaffolding is necessary for exterior masonry work. The work stopped when the pandemic took over our daily lives. And — like the majority of the authority’s projects — it remains on pause for the foreseeable future.

Using outdoor areas might be helpful in the short-term, as the early months of the academic year are usually warmer. But they also might fall out of favor as the air gets chilly.

Navigating the coronavirus pandemic over the last five months or so has been a day-by-day endeavor, and conditions remain unpredictable. The Bronx looked very different three months ago with an outbreak that seemed out of control.

And even with the spread stunted severely, the borough’s situation could look quite different another three months from now.

Whether that difference will be for the better or the worse remains to be seen. But there’s still an urge to return to some semblance of normal — even if that “normal” is outdoors.

This desire for normalcy is part of the reason some are pushing to maximize in-person classrooms. But to do that, schools need more space.

And it has to be sustainable as winter comes and remaining outside ends up impossible.

Councilmen Fernando Cabrera and Andrew Cohen support locating spaces for these alternative sites, and have even floated a few ideas. But Assemblyman Jeffrey Dinowitz is taking a bit of a different approach to the issue.

Dinowitz has called on his constituents to share some of their ideas for additional classroom space. The lawmaker has encouraged them to get creative and submit those ideas directly to the School Construction Authority.

While people may want to have in-person classes, there are certain accommodations that need to be made, Dinowitz said.  And school won’t look as it once did.

“There’s no way we can have ‘regular’ school this September,” he said. “That’s dangerous for kids. It’s dangerous for teachers and the other personnel in the school. So we have to come up with other ideas.”

But not everything is going to be back on campus this fall, even if the coronavirus is kept at bay. The city’s overall plan depends on the adoption of a hybrid model, meaning remote learning is still part of the equation.

As a result, Dinowitz believes the city needs to improve its remote learning model for days students aren’t in the classroom.

“I have a concern that some kids just get left behind in that process,” the Assemblyman said. “And usually the kids left behind are the very kids who might have the most difficulties in the first place, and we have to be very cognizant of that.”

As far as the RKA arcade is concerned, Dinowitz is a bit hesitant. While the arcade itself is covered, many more potential outdoor spaces aren’t. And if they’re relied on for in-person classroom, what happens on a rainy day?

But these times are unprecedented. And to Dinowitz, if the need for more space is there, it’s time to get creative.

“We have to think outside the box,” he said. “We should try anything and everything we can.”