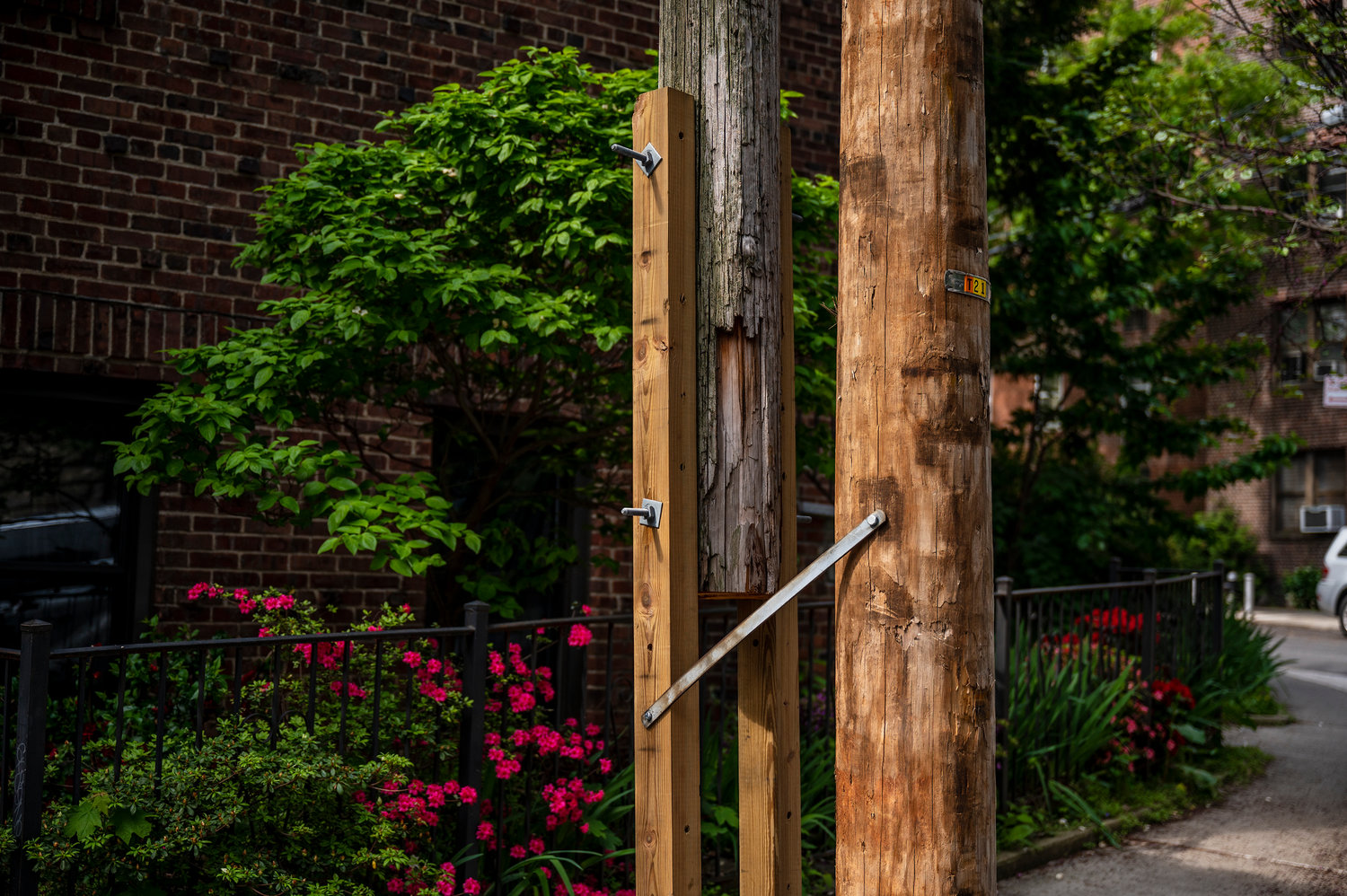 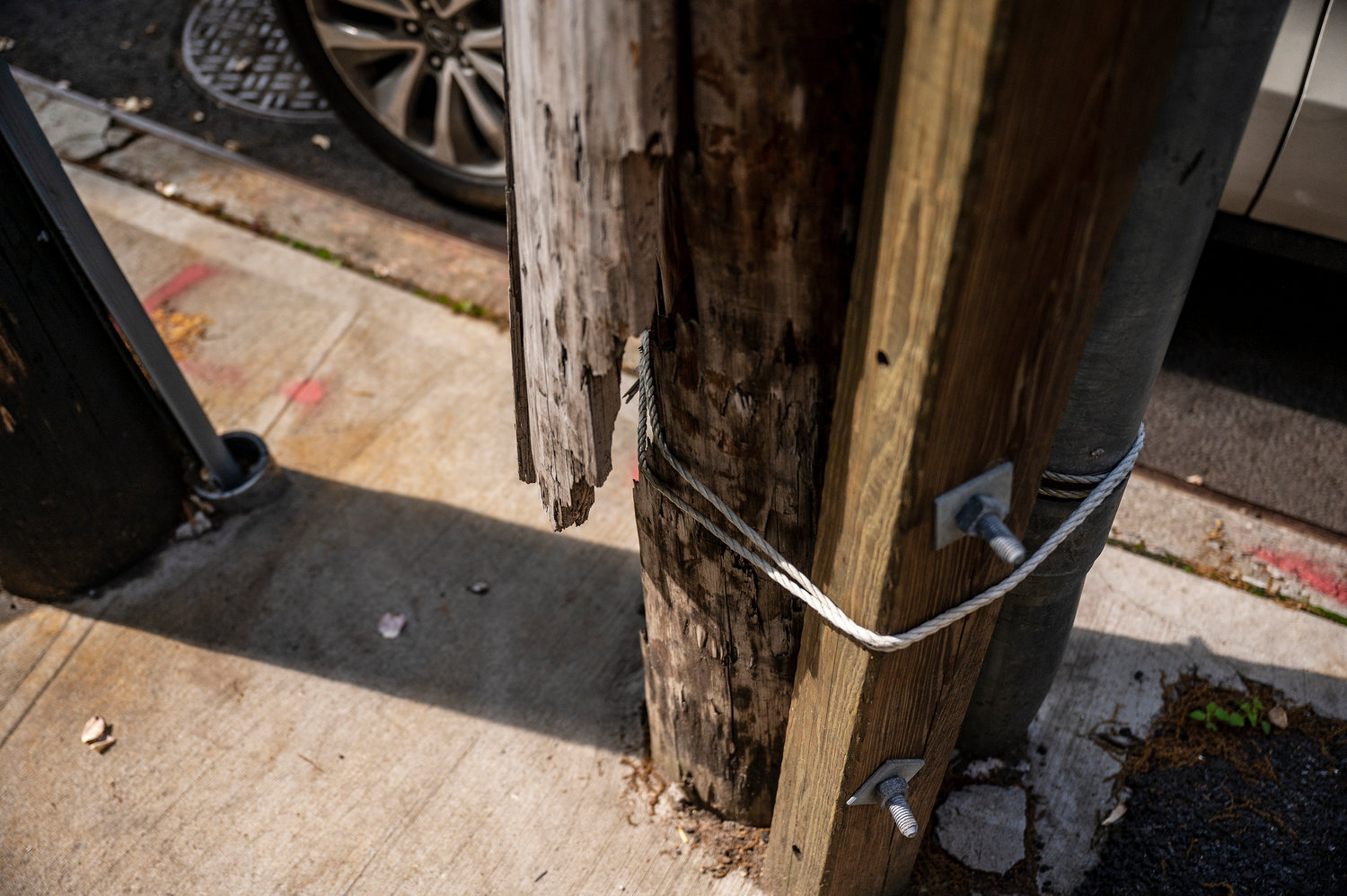 On Sedgwick Avenue there is a broken utility pole that is held in place with screws. Wood and rope were placed by Con Edison in a temporary fashion to prevent immediate danger for the neighborhood.
Hiram Alejandro Durán
Previous Next
By STACY DRIKS

Like many residents of Kingsbridge Heights, Margaret Groarke noticed an overwhelming amount of cracked or long planks supporting utility poles in her neighborhood. Con Edison tells Groarke and her neighbors not to worry.

“Some work was done because of community complaints to replace these poles but when will the job be finished and the dangerous poles removed?” asked Groarke, who is president of the Fort Independence Park Neighborhood Association and a political science professor at Manhattan College. Her group is dedicated to preserving and improving the quality of life for residents of the community.

• Giles Place has a Con Edison pole that is cracked and is left on stilts, Groarke said. The structure is hanging in a V shape suspended in the air.

• Sedgwick Avenue is completely cracked, yet Con Edison supported it with extra planks by extra planks, which utility companies usually do for a temporary fix.

Gannon has received the same complaints multiple times from the same residents about hazardous utility poles in the area.

“Sometimes they are leaning, sometimes the wood is wedged, and something is holding them up,” Gannon said.

According to Groarke, there has been little to no inspection of the utility poles around the neighborhood that look potentially dangerous.

Con Edison said it has a situation on Sedgwick Avenue. They have installed a new pole and will move their existing riser — an electrical connection to the side of a pole — on Sedgwick to the new installation.

“There is still cable equipment on the third pole; that equipment will also be moved to the new pole so that pole (damaged one) can be removed,” said Drury.

However, Con Edison cannot give distinctive details on when the company will complete the transfer of the equipment.

The life expectancy of a wooden utility pole can be about 50 years, according to an Electric Power Research Institute study.

Most utility companies assume their poles provide 30 to 40 years of service life.

However, most poles are a lot older. In addition to age, the poles are damaged by storms and insects.

To thoroughly repair or remove a utility pole the process can take days or even months to complete because of the amount of time it takes for the utilities to investigate and communicate.

Gannon told The  Riverdale Press that when complaints like these come into the community board’s office, she sends them over to utility companies in an email chain. She then sends a photo and a brief description of the issue.

“I’m always sure to say it’s a dangerous condition that we’re really concerned about,” she said.

Following an email, the utility companies,  usually Verizon or Con Edison connect on an internal server. “They work off of a database called National Joint Utilities Notification System, and that is something they do internally,” Gannon said.

The notification system is known for providing efficient communication and work coordination to partner pole transfer and other projects.

Meanwhile, utilities investigate who is responsible for which wire or pole.

Verizon explained the pole replacement and repair process to Gannon.

“If there’s a New York City street light next to the pole, Verizon does not touch any other utilities and cannot remove the pole until they all transfer their attachments to the new pole,” according to a Verizon statement.

Notification system “tickets can take months to be completed as each utility is given a 30-day deadline to finish their steps before it goes back to us to do our transfer and remove the pole.”

When a utility pole breaks or a temporarily fixed one breaks again, many times utilities are first finding out about them from residents. And the best the utilities do is prop up the poles with planks and metal rods.

“I think they do temporary stuff because it’s a safety concern,” Gannon said, “but temporary is lasting a really long time.”