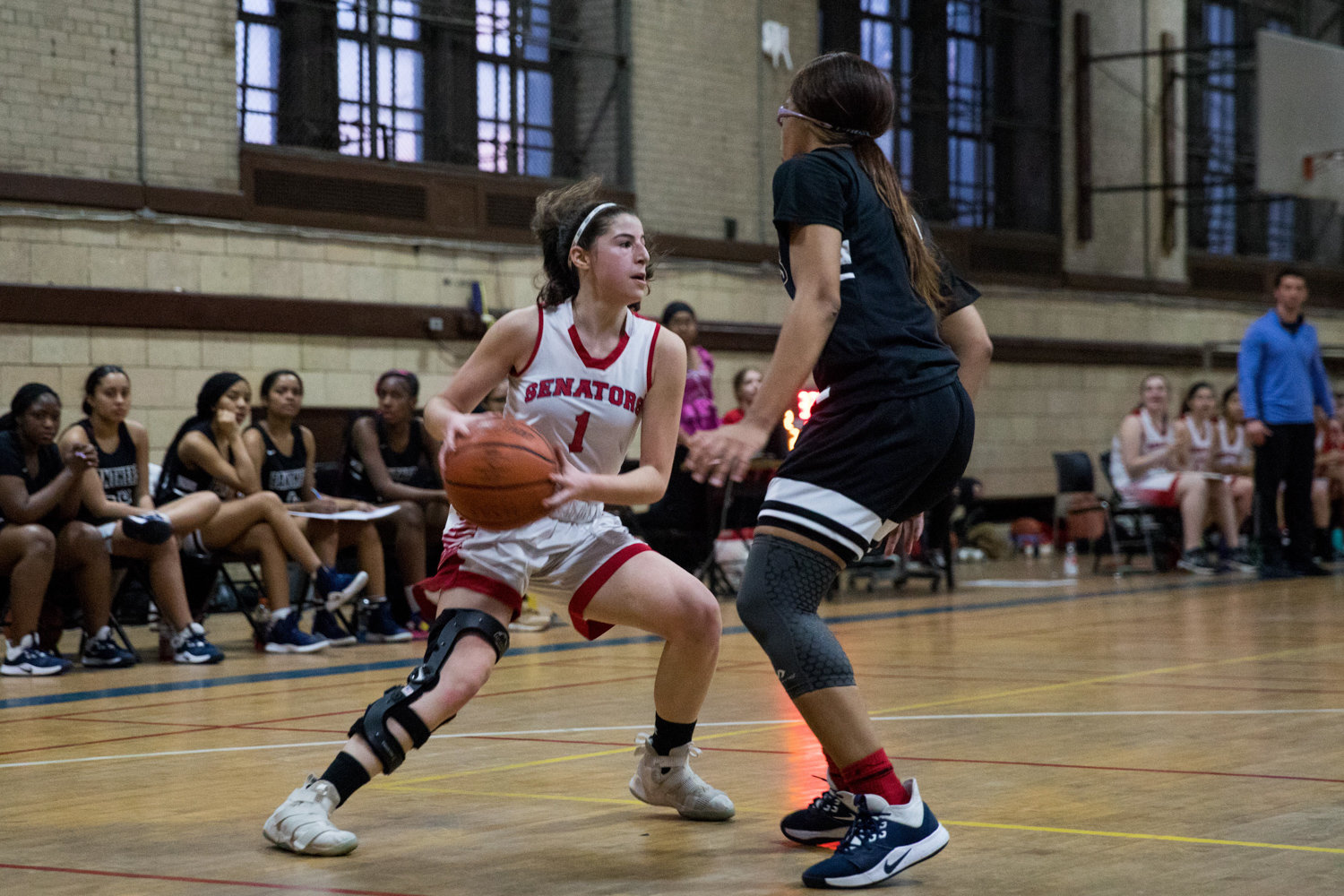 Jacqui Harari, who played both basketball and softball for American Studies, saw her final softball season wiped out due to the coronavirus pandemic.
JULIUS CONSTANTINE MOTAL / File 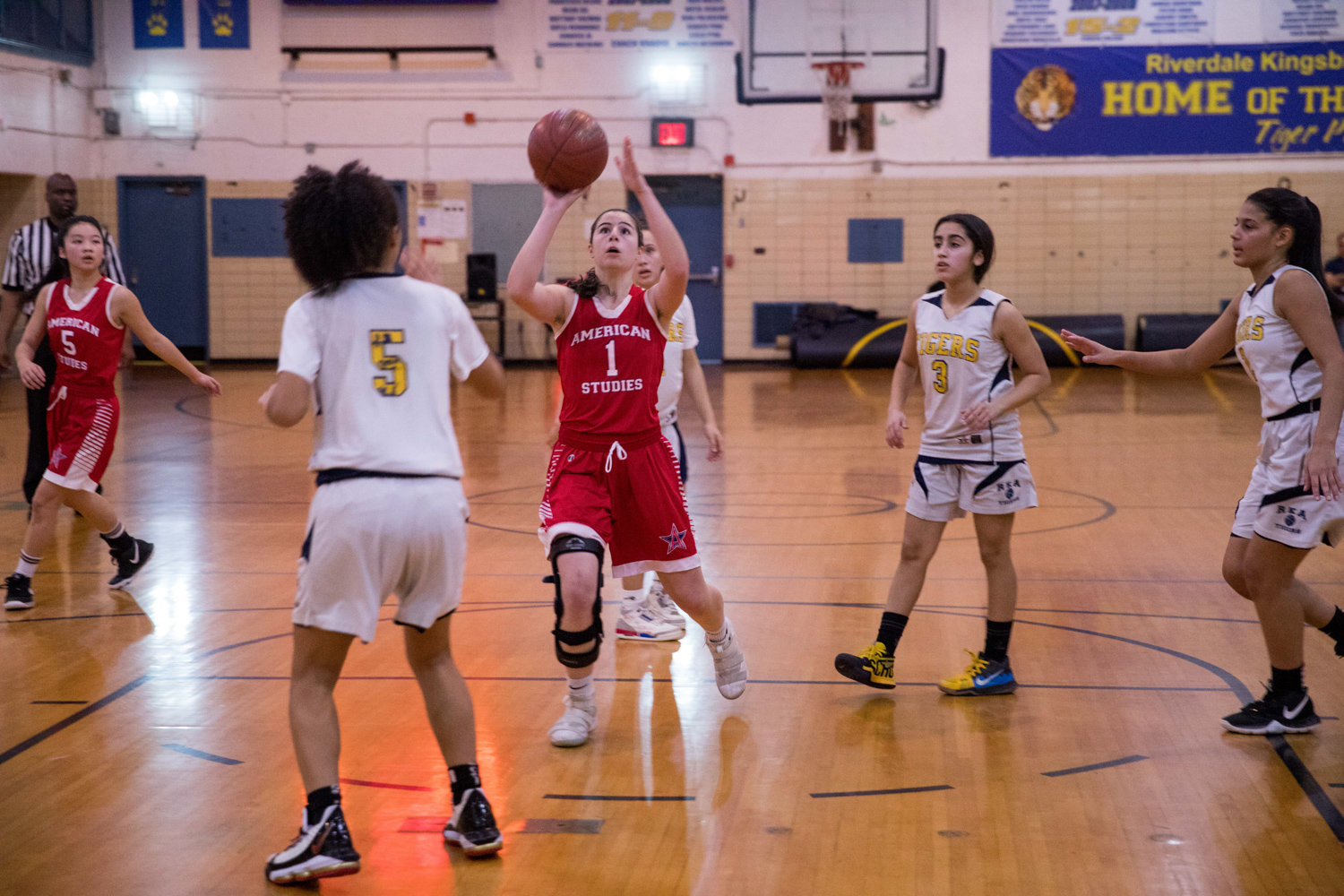 American Studies’ two-sport star Jacqui Harari hopes for one last chance to take the field with her softball teammates before the end of the school year. But there’s a big question mark on whether or not that will happen because of the ongoing coronavirus crisis
JULIUS CONSTANTINE MOTAL / File
Previous Next
By SEAN BRENNAN

Jacqui Harari and her American Studies softball teammates had just finished a preseason scrimmage against Bronx Science back on March 11, and the senior outfielder was stoked for what was expected to be a special season for the Senators.

With a senior-dominated lineup that also featured catcher Emily Eljamal, shortstop Maia Fernandez, pitcher Neveah Franky and outfielder Emma Bartolazo, the Senators were looking to go a step or two beyond last season’s success when they reached the quarterfinals of the Public School Athletic League’s postseason.

But of course those dreams, like so many others for high school and college athletes across the country, were short-circuited due to the coronavirus outbreak. All that’s left now is a long list of what-ifs.

“I guess it was a nice way to end the season,” Harari said of the scrimmage with Bronx Science. “It’s definitely tough. We haven’t even had a chance to talk about the cancellation of the season as a team.”

That’s because the PSAL’s decision to cancel the season came quickly. Too quickly for teams to assemble to talk about the decision. But American Studies’ head coach Ryan Hondorf had an inkling something was brewing a day before the announcement was made.

“We got the message on Friday (March 13) that the PSAL was canceling the season,” Hondorf said. “But when we were out for practice on Harris Field the day before I started hearing about the NBA and (the start of professional) baseball being canceled. That’s when I kind of realized there was a very high likelihood that we weren’t going to play this year.”

Just as painful as the cancellation was the fact that team members have not had a chance to be there for one another as closed schools and social distancing makes it impossible to gather as a team. It prohibits the Senators from gaining any closure for their lost season and, in the case of the five seniors, their lost careers.

“Yeah, that’s kind of tough,” Hondorf said. “All we can do is keep in touch, but I think we have to get back together at some point, even if it’s for an alumni game or something like that when all this settles down. Just so we can all get out there one more time as a team.”

Harari and teammate Allison Glick live near each other in upper Manhattan, and are both having a hard time dealing with not only the virus outbreak but the loss of their shared love of softball.

“A lot of my teammates are some of my best friends,” Harari said. “The past week I’ve been seeing a few people, but not that much. I was actually throwing around a softball with Ali because we were both just missing the season.”

But now Harari, like most everyone else, has taken to spending most, if not all, of her day at home. Waiting for good news, waiting to see if the April 20 return date to school will hold up. Though she is not optimistic.

“As different (officials) predict the course of the virus, they’re saying it’s going to peak on May 1,” Harari said. “And since it takes about a year and a half for vaccines to be approved, no one really knows what to expect. But I really hope we go back because I don’t want to leave like this. I think if our government officials become a little more strict, sooner rather than later, it could curb the virus a little bit more and maybe they’ll start opening schools again.

“But I don’t think that would be until at least late May.”

With the senior trip and the prom already canceled along with their final season, Hondorf feels in his heart for his seniors.

“I can’t even imagine what it’s like for them,” he said. “This was supposed to be a very strong year for us, so there is a lot of disappointment. But at the same time we’re not the only ones going through this. There are a lot of other people who have it worse. I know everyone is extremely disappointed because they all worked really hard for his season. But it’s something that we can’t control.”

One thing Harari hopes will happen — if the schools open again — is to get together one final time with her team. Put on their Senators uniforms one last time and take the field for one lasting memory.

It’s that hope that sustains her through these troubling days.

“Maybe we can get together one last time and maybe scrimmage Clinton or Walton,” Harari said. “Just to play one more time.”