Veep touts signature Build Back Better plan, even as new threats against it emerge 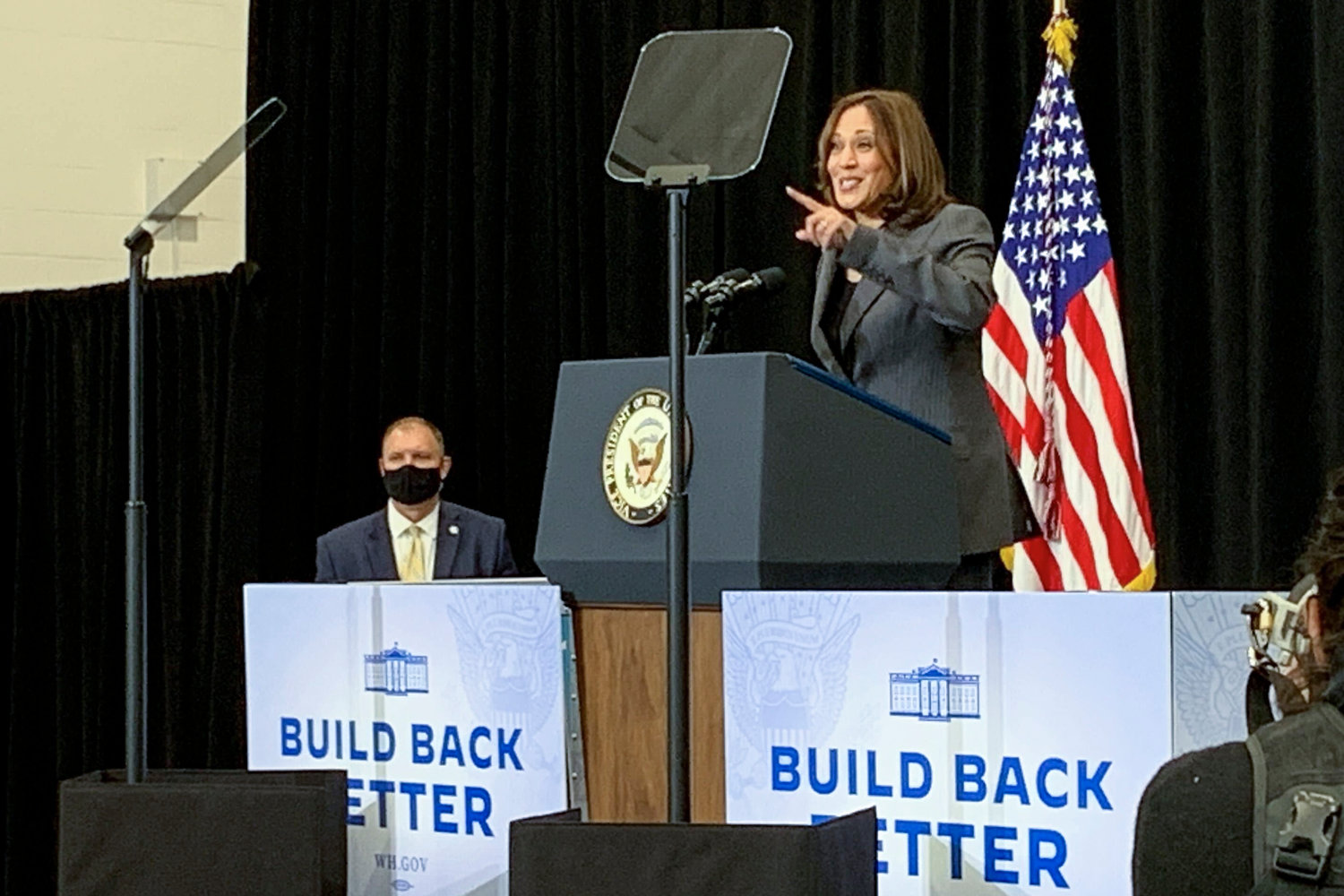 Vice President Kamala Harris refuses to give up on the Biden administration’s Build Back Better infrastructure plan, visiting the Northeast Bronx YMCA in Edenwald last week in the heart of The Squad territory. Yet Squad congress members Jamaal Bowman and Alexandria Ocasio-Cortez say they back the bill package — and blame U.S. Sens. Joe Manchin III and Kyrsten Sinema for any threats jeopardizing it.
MICHAEL HINMAN 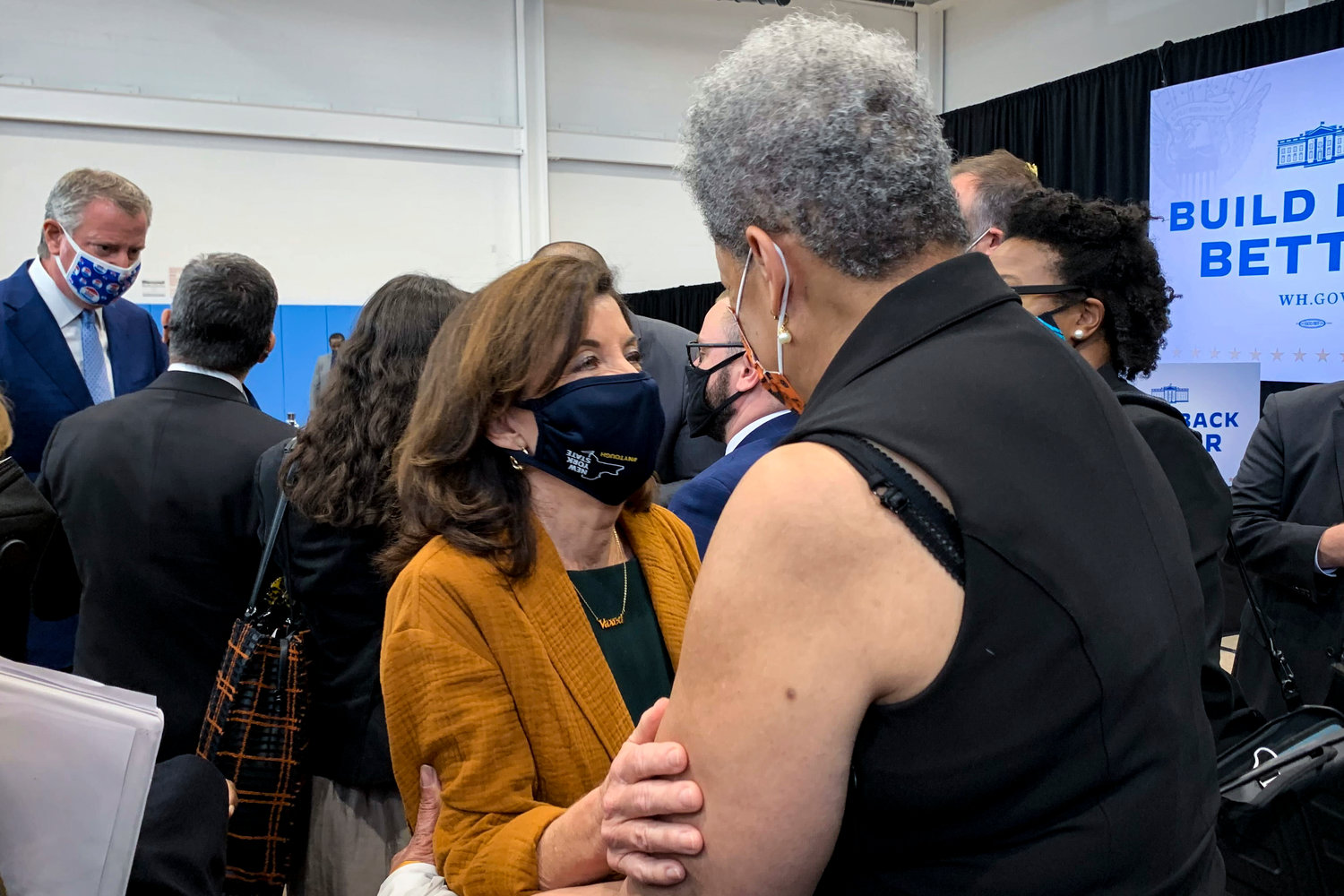 Gov. Kathy Hochul and Mayor Bill de Blasio are rarely supporting acts to anyone, but were on Friday as they welcomed Vice President Kamala Harris to the Bronx. Using the newly built $60 million Northeast Bronx YMCA facility in Edenwald as a backdrop, Harris assured the small crowd of invited guests President Biden’s Build Back Better infrastructure plan was still alive and strong, despite some opposition from Senate Democrats.
MICHAEL HINMAN 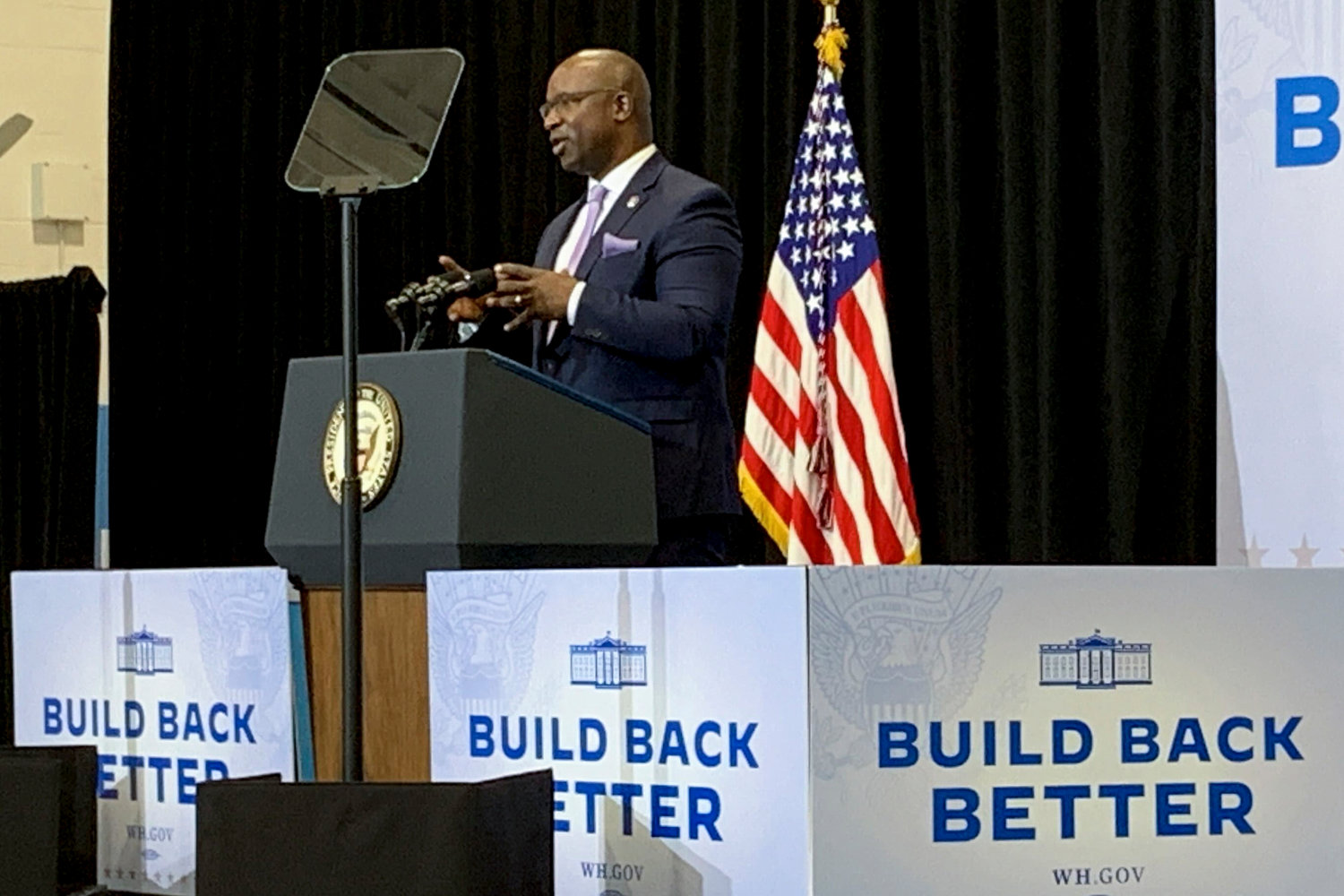 U.S. Rep. Jamaal Bowman found common ground early with Vice President Kamala Harris over their passionate drive to help children grow up in healthier communities. That has created a solid working bond between the two, and was what Bowman believes was likely the driving force bringing Harris to the Bronx in the first place last week.
MICHAEL HINMAN
Previous Next
By MICHAEL HINMAN

It’s no secret: There is a serious health crisis in the Bronx. The coronavirus hasn’t helped, but inaccessibility of medical care, poor air quality and a number of other factors have exacerbated already high rates of asthma, diabetes, infant mortality and other issues in the borough.

Yet even the bad sometimes comes with a little good. It was something that helped a new congressman click well with the Vice President of the United States. In the process it’s created a collaborative effort shining a bright light on U.S. Rep. Jamaal Bowman’s district, and culminated with a visit to the Bronx last week by Kamala Harris herself.

Bowman and Harris met this past summer when President Joe Biden signed a bill into law making Juneteenth a federal holiday. The congressman had already been a fan of what Harris did in California before her days as vice president, working with Dr. Nadine Burke Harris — who would go on to become that state’s first surgeon general — in a San Francisco-based project designed to prevent what they called “adverse childhood experiences,” believed to have a significant impact on the health of children.

“I would love for our offices to work together to do more of that work legislatively and in our communities,” Bowman told the vice president at the signing ceremony. “And one of the reasons why I think she came (to the Bronx) is because every time I had the chance to see her or her staff, I would bring it up, and we would have a working session around that issue.”

Although Harris’ visit to the newly built Northeast Bronx YMCA in Edenwald was primarily focused on the Biden administration’s infrastructure plan of “Build Back Better,” Bowman knows the vice president remains committed to creating healthier communities for children and teens.

“Especially now, because again, rising violence and trauma from COVID,” Bowman said. “This is the moment to take a holistic approach to solve these problems. It’s not going to be just health care, just law enforcement, just education. It has to work together, it has to be holistic, and that’s what her and I have been talking about.”

But it was Bowman who had a real chance to shine, welcoming the country’s second most-powerful leader to his district. Although the YMCA was built before either assumed office, it still remains a symbol of what the congressman said was a fresh look at serving those communities that were often ignored in the past.

Many called the opening of the YMCA — only the second in the Bronx after Castle Hill — a gamechanger for a community that doesn’t get much of a chance to play at all. But that’s exactly what Harris said the administration’s Build Back Better plan is trying to change.

But how much of that agenda will actually become law is another question. The Biden administration has pushed hard to get the key pieces in place before he heads overseas later this week. Standing in his way are two Democratic senators — West Virginia’s Joe Manchin III and Arizona’s Kyrsten Sinema — who wield the power in a split chamber to derail the whole thing.

Both senators have demanded significant cuts in what they have described as efforts to create a more bipartisan approach. Yet that could mean all kinds of programs Biden and Harris have touted could be on the cutting room floor, including expanded health care for senior citizens, boosts to the Affordable Care Act, and even the monthly child tax credit payments set to expire at the end of the year.

“That is something I have been working on for a long time,” Harris said about the child tax credit. When asked why the credits need to be paid monthly, the vice president said the answer is simple: “You got to pay your bills every month, so why don’t we provide the tax cut every month.”

The tax credit provides up to $300 monthly per child, designed to help manage the cost of raising children. Especially for families where the primary caregivers are working as much as they can to keep the lights on and food on the table.

“But unless Congress acts, these monthly checks will stop coming after December,” Harris warned. “You’ve heard that, earlier in the day, one-in-three children would no longer be covered by the full tax credit. That includes half of Black and Hispanic children in America. Needless to say, we could not let that happen. We cannot let that happen, and we will not let that happen.”

The infrastructure plan has also met some resistance from House Democrats, like The Squad’s very own Ocasio-Cortez and Bowman.

But the local congressman made it clear: None of them are against the bill. They just want to make sure other funding they support doesn’t get lost in the shuffle.

“We’re holding out, but we’re in lockstep with the president and the Speaker — like this is their agenda,” Bowman told The Riverdale Press after the event. “The majority of Democrats are with this agenda. It’s just a few — the Manchins and the Sinemas of the world who are trying to stop it. And we’re just not going to let them.”