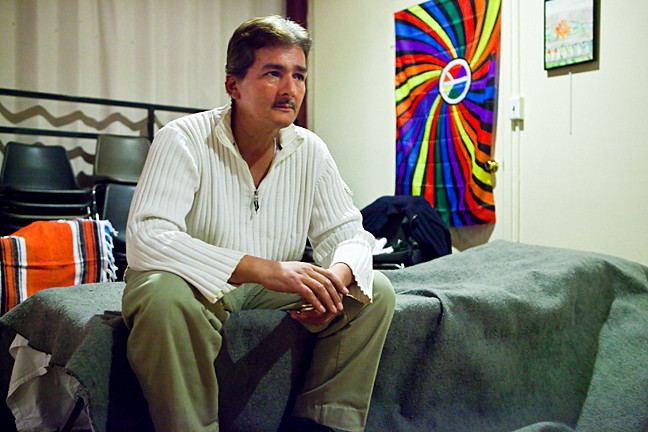 A decade ago, the opening of the Monday night men’s homeless shelter at the Riverdale-Yonkers Society for Ethical Culture generated fierce opposition from within the neighborhood. More than 500 Monday nights later, a week after the center celebrated its 10-year anniversary, the scene at the center in Fieldston was far from controversial.

Six men, the usual number that sleep at the Ethical Culture Society’s meeting house on Manhattan College Parkway, sat around a table, eating dinner and talking about the history of Haiti, crime in various Bronx neighborhoods and the superior accommodations that Ethical Culture’s meeting room offers.

The men talked with a group of six volunteers, including four Manhattan College students, about the week and goings on in their lives.

Kenneth Cooper, 43, spoke openly about some of the problems he’s had in life. After breaking up with his girlfriend, he couldn’t afford his rent and lost his security job. He said he’s been homeless for about nine years.

“I’ve been in some trouble here and there, that’s the case with all of us I guess,” he said.

Mr. Cooper, a big man, full of energy, who everyone calls “Coop,” has been a regular guest at the Ethical Culture Society on Monday nights for more than two years, off and on. Other nights he goes to a drop-in center called the Living Room/Safe Haven in Hunt’s Point. When men drop in to the Living Room, they are provided with a list of shelters that have available beds for people who don’t exhibit any negative behavior from the use of alcohol, drugs or as the result of mental illness. If it’s a Monday night, Riverdale’s only shelter is on that list.

But the Ethical-Culture Society’s Monday night shelter almost didn’t happen. John Benfatti, who runs the program, said he and others in the neighborhood tried to start a homeless shelter at Riverdale Neighborhood House in the mid-90s. The board, then headed by Press publisher Richard L. Stein, approved the plan, but it was stopped in its tracks by widespread opposition — or “not in my backyard” syndrome — from within the community.