Homeless shelter returns to the spotlight of controversy

North Riverdale businesses are told to vacate, prompting some local electeds to seek out answers 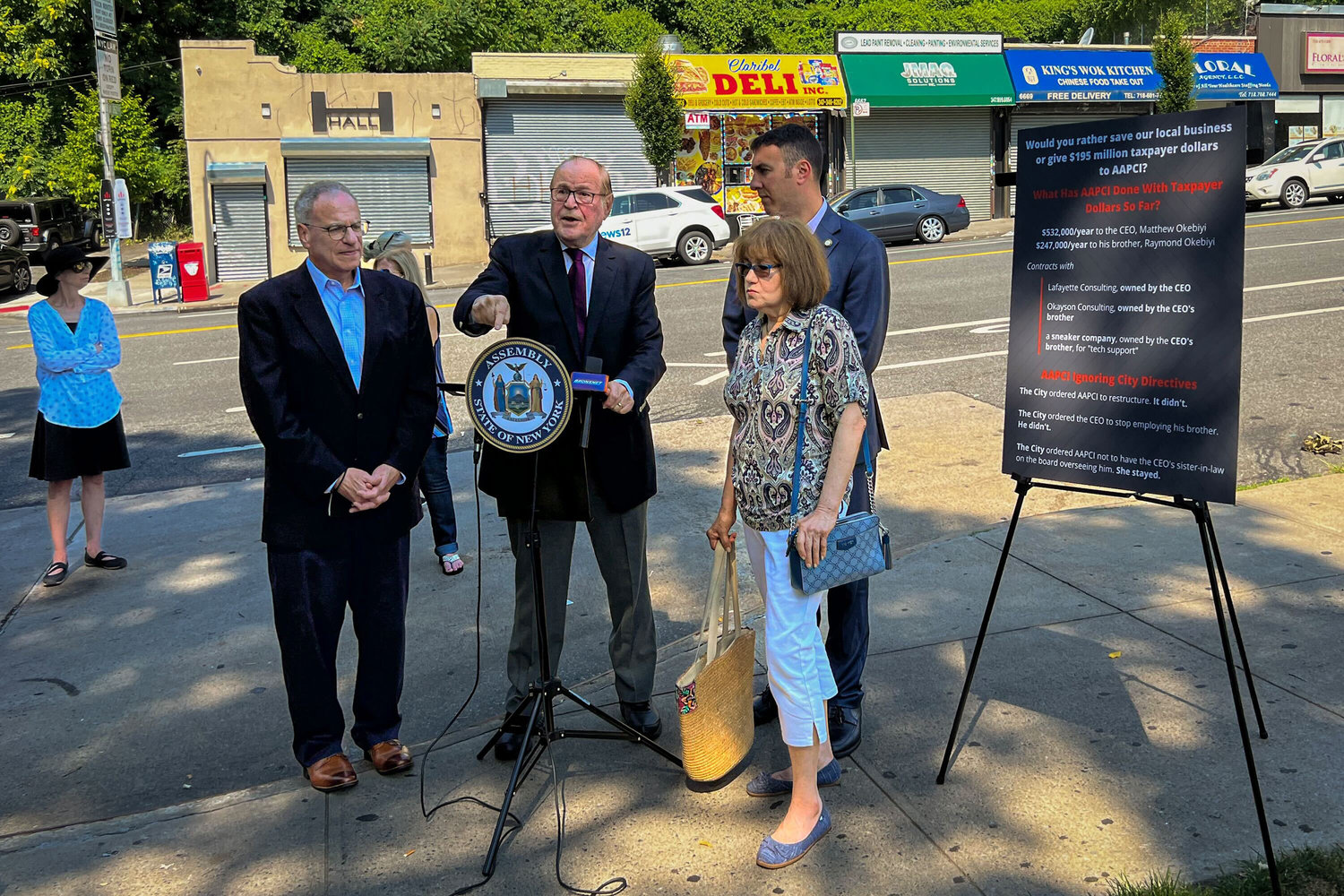 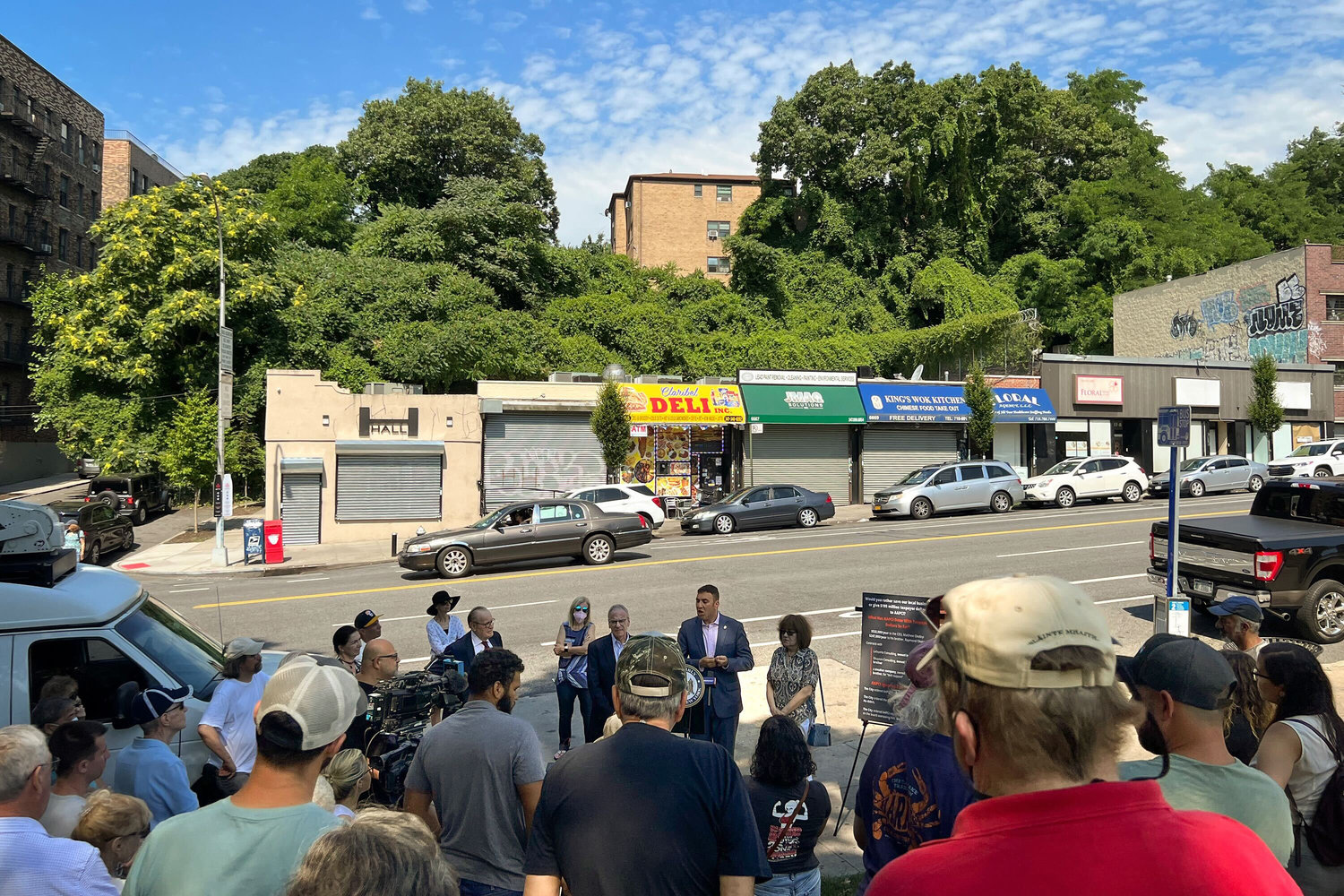 As state and city officials brief residents about their call for an investigation into the proposed men’s homeless shelter, in the background you can see the six storefronts that would be affected and have already received notice to vacate by the end of the year.
ABIGAIL NEHRING
Previous Next
By Abigail Nehring

North Riverdale’s apprehensions about a proposed homeless men’s shelter at the corner of Broadway and West 262nd Street were reawakened this week.

First, the owners of the six businesses at the site received notices from the landlord that they will need to vacate by the end of the year. Then, community leaders briefed residents and the press about the lack of transparency in the city’s homeless services procurement process related to the proposed shelter.

New business filings in May appear to link the shelter operator to an entity named 6661 Broadway Investors LLC. It is a sign that the city’s proposed $195 million contract with African American Planning Commission Inc. may be progressing after a months-long lull.

AAPCI did not return a request for comment Tuesday on the status of their proposed contract or plans to purchase 6661 Broadway. City Comptroller Brad Lander has not yet received the contract for review and final approval, according to the comptroller’s office.

Residents gathered Tuesday morning on a grassy slope of Van Cortlandt Park across the street from the proposed shelter for a briefing from Community Board 8 and local representatives Assemblyman Jeffrey Dinowitz and City Councilman Eric Dinowitz. The father-son duo called on the city department of investigation commissioner Jocelyn Strauber to launch an official probe into the homeless services department, AAPCI, and its partner, Court Square Real Estate Partners.

They say the three entities may be engaged in inappropriate closed-door talks.

“It seems to me that DHS is choosing to double down on their bad investments by forcing through a $195 million contract to a well-connected and well-compensated so-called non-profit provider,” said Assemblyman Dinowitz. “New Yorkers deserve to know that their taxpayer dollars are being used for the betterment of our city, and not to line the pockets of a few individuals while the most vulnerable among us continue to suffer.”

Riverdale signaled resounding opposition to the proposed shelter when it was announced last fall. CB8 chair Laura Spalter said she received more than 700 letters in three weeks. An online petition to block the project from moving forward has gained 1,938 signatures.

She’s kept in touch with business owners at the site since last fall. “It’s a terrible thing demolishing the businesses, she added. “We don’t know where the contract is.”

AAPCI’s expansive portfolio of city-contracted shelters and supportive housing developments became the subject of a department of investigation inquiry earlier this year following a New York Times investigation of the city’s shelter system.

Whether or not the city is shortchanged in its dealings with AAPCI, residents in North Riverdale express wariness on other fronts. They argue the location is inappropriate and point to the lack of services and mass transit nearby. One member of the crowd at Tuesday’s briefing asked whether families should continue to take their children to the park across the street.

“After the Times story, a lot of people thought it was dead,” Spalter said in an interview after the briefing. “It’s stalled, but this will come back.”

CB8 land use committee chair Charles Moerdler said the fight over the shelter could be an early test for Mayor Eric Adams’ administration.

“So far this mayor has not taken the specific steps he says he will take to deal with the homeless problem,” he said.

“Homeless people are still human beings deserving of shelter, and this community has pledged to help provide that. Having said that, you can’t submit them to these kinds of conditions. It’s up to the mayor to see if they want to keep adhering to a faulty plan, a dangerous plan.”