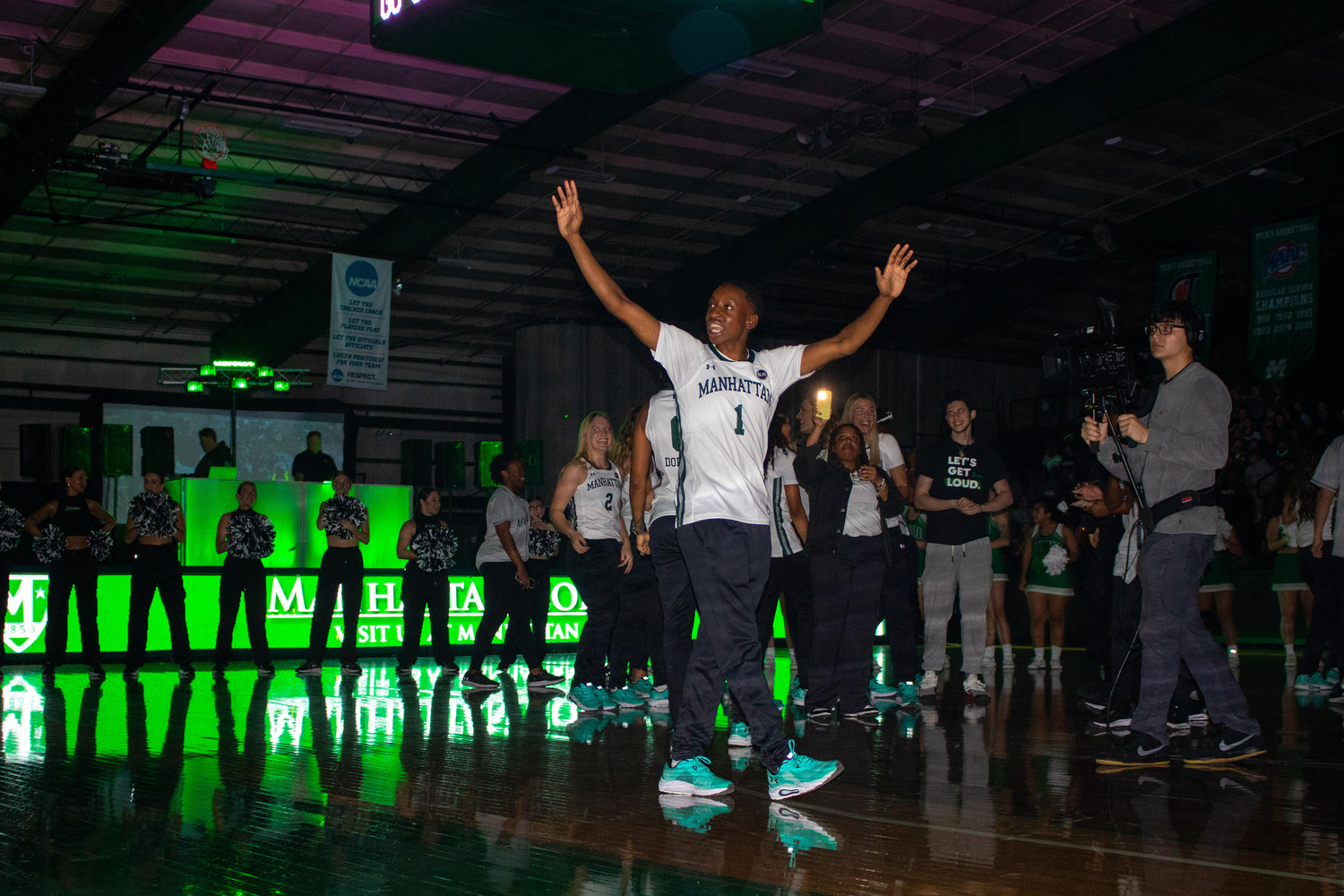 Manhattan College point guard Dee Dee Davis enters the court during this year’s Manhattan Madness as the women’s basketball team is introduced. Davis was named pre-season player of the year in the MAAC.
GoJaspers.com

The announcement is almost everything I have ever worked for. I say ‘almost’ because the real deal will only be sealed if I can pull this off in March.”
DEE DEE DAVIS, Manhattan College senior point guard
By Caroline McCarthy

This honor comes full-circle for Davis, who was unanimously voted Metro Atlantic Athletic Conference Rookie of the Year during her 2018 debut. After utilizing her red-shirt eligibility in the 2019-2020 season, Davis went on to earn All-MAAC Second Team in the 2020-2021 season and All-MAAC first team in 2021-2022. Davis, in addition to being named player of the year, is also one of three unanimously voted First Team All-MAAC players this season.

“Dee Dee being picked preseason POY is an incredible honor because our league has so many tremendous players,” said head coach Heather Vulin. “Dee Dee’s work ethic and commitment to her game is elite.  Most people only get to see the 30+ games, but our staff and team get all the practices and when Dee Dee is fourth quarter Dee Dee we are never surprised.  We just know she is built different and thrives off the pressure.”

Davis was the second leading scorer in the conference last season, averaging 18.3 points per game. She also produced 4.4 rebounds, 57 steals and 3.2 assists per game. She surpassed 20 points in 13 games, and joined the 1,000 point club in the MAAC quarterfinal game against Canisius.

In the MAAC championships, Davis had a career-high 35 points and contributed two assists. Seventeen of those 35 points were scored in the last five minutes of play. Davis earned a place on the all-tournament team based on this performance.

“This announcement is almost everything I have ever worked for,” Davis said. “I say almost because the real deal will only be sealed if I can pull this off in March. I know with my teammates by my side, that goal is possible.”

Another Jasper standout, Brazil Harvey-Carr, was picked for the All-MAAC preseason second team All-MAAC. Harvey-Carr averaged 12.2 points and 6.9 rebounds per game. She scored a season-high 22 points in the MAAC semifinals, helping to send the Jaspers to the championship game.

“I think Dee Dee and Brazil are two of the most dynamic and exciting guards in the MAAC. I’m very happy they were recognized for their talent, but knowing both of them the only accolade they want is to hold the MAAC trophy in March,” said Vulin.  “Their talent and leadership to our program is extremely valuable.  Both players were voted captains by their teammates because not only are they respected but their teammates believe in their leadership and commitment to our program.  I’m expecting a special year from both players.”

The coaches’ poll has ranked the Jaspers second in the MAAC this season, a position they earned after appearing in the MAAC championship game for the first time since 2003. The Jaspers received three first-place votes for the poll, but was edged out by Quinnipiac by five points for the first place spot.

The Jaspers’ home opener is Nov. 7 at 7 p.m. against Wagner College.