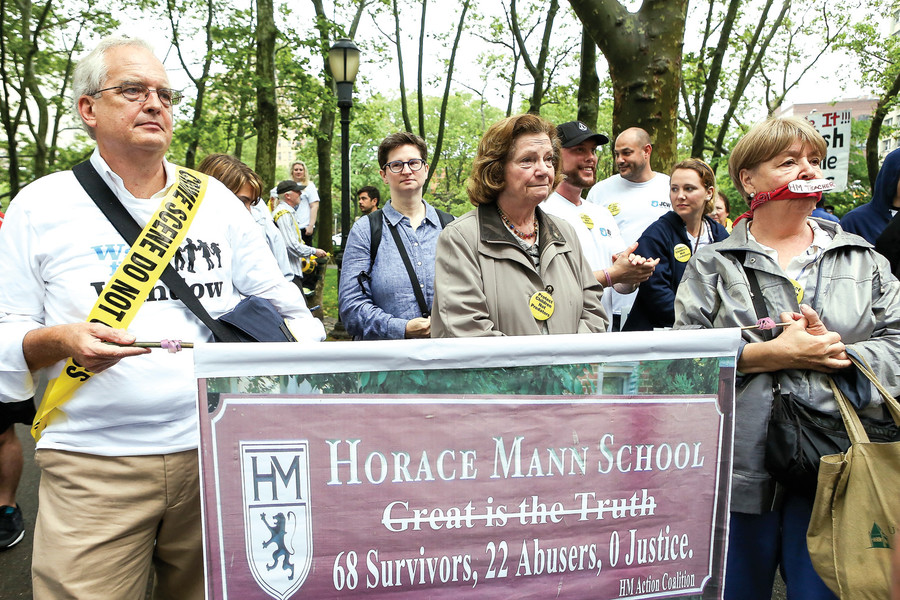 Members of the Horace Mann Action Coalition (HMAC) joined about 150 other activists in a march across the Brooklyn Bridge on Sunday to demand passage of the long-stalled Child Victims Act.

The trek ran from Cadman Plaza to Pace University, across from City Hall.

“The early forecast was daunting, but people came out anyway,” Peter Brooks, a HMAC leader, said after the march. “It was so gratifying to see them all together. This is the first time I feel we have had this large of a footprint.”

Since revelations of widespread sexual abuse at Horace Mann emerged several years ago, members of HMAC have sought justice at their alma mater. They have also lobbied for the Child Victims Act, which would end the statute of limitations for child sexual abuse cases and to open a window for past cases to be prosecuted. While the legislation has previously passed the State Assembly, it has stalled in the Senate.

Attendance at the Sunday march exceeded organizers’ expectations, leaving about a third of the attendees outside the auditorium where a press conference took place at the end of the walk.

David Shapiro, the CEO of Jewish Community Watch, said he was pleased at how many members of Jewish groups turned up.

“Usually it’s the Catholic groups that show up year after year, but this is the first time that the Jewish actually participated as well to show support,” he said.

Mr. Brooks said he hopes increased support for the Child Victims Act leads to action in Albany. This year, The Daily News has prominently championed the cause, devoting front-page stories to criticism of the governor and state legislative leaders for sitting on the bill.

“You have victims that can see their abusers working in another school or working as a priest or in a camp, but there is nothing that they or the district attorney can do to stop them. [Victims] are people who have been failed countless times and as an alumnus of my school, I don’t want to be a part of that failure anymore,” Mr. Brooks said. “Removing the statute of limitation not only provides an opportunity for victims of an older age to come forward, but it removes the incentives for the institution to stall the report of these crimes.”

“We might be lobbying out loud [but] there are a lot of people lobbying behind the scenes that are against passing this,” he said. “A lot of the larger special interest groups like the Catholic Church feel that if this gets passed, then a lot of churches and yeshivas will be forced to close.”