How the Hebrew Home got Clinton to talk elder abuse 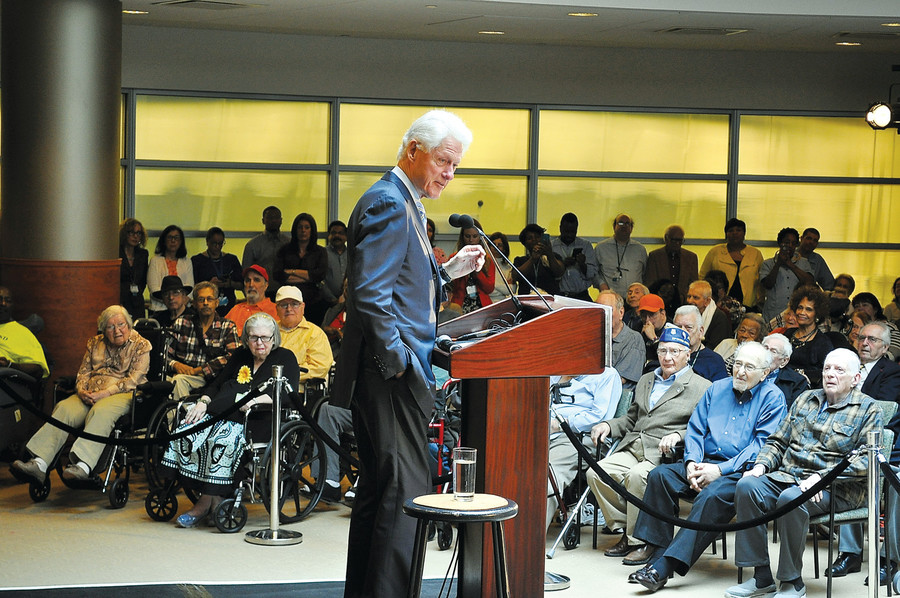 Former President Bill Clinton campaigns for his wife Hillary Clinton at the Hebrew Home at Riverdale on April 11.
Alice Guilhamon
By Shant Shahrigian

Amid the frenzy of campaigning in New York earlier this month, former President Bill Clinton paused during a speech at the Hebrew Home at Riverdale to touch on one of the biggest priorities of the local retirement facility.

“On the way in, a couple of your folks talked to me about the importance of America doing more with the challenge of elder abuse, because there’s so many vulnerable people,” Mr. Clinton said while campaigning for his wife Hillary Clinton on April 11.

The former president’s acknowledgment of the hidden problem of elder abuse was some five years in the making.

It started with a chance encounter at the Red Rooster in Harlem. The head of the Hebrew Home, which established the country’s first shelter for victims of elder abuse in 2005, had plans to bring out-of-town colleagues to the trendy restaurant. After making reservations about two months in advance, the Hebrew Home’s Executive Director Dan Reingold and Joy Solomon, the director and managing attorney for the home’s Weinberg Center for Elder Abuse Prevention, were shocked when the Red Rooster told them last-minute that their May 5, 2011 dinner would have to be pushed back by two hours.

“We went and Dan said, there’s probably someone important downstairs,” recalled Ms. Solomon. “We did a little reconnaissance.”

While the Hebrew Home’s party was waiting at the Red Rooster’s bar, Mr. Clinton emerged from the basement level. Mr. Reingold seized the moment.

“I said, ‘Mr. President’ and caught his eye,” he recounted. “I said, ‘I’d like you to meet some people who have come from all over the country to talk about elder abuse and sexuality,’ and he came over and I stepped back.”

Experts from the West Coast, Illinois and other states proceeded to give their elevator pitch about why elder abuse was important. Elder abuse affects one out of 10 people older than 60, according to Ms. Solomon.

“He was with us for like 10 minutes,” Mr. Reingold said of Mr. Clinton. “And he was talking about a neighbor of his in Little Rock, Arkansas who had been financially abused as an older adult and he was really resonating about this.”

The former president eventually went on to other engagements. In recent years, the Weinberg Center has established a nationwide network of shelters for elder abuse victims, while providing services to New York victims at its 5901 Palisade Ave. facility.

Fast forward to Friday, April 8 — on the home stretch of the heated presidential primary here — and Mr. Reingold “catches wind,” as he put it, of the Hillary Clinton campaign’s interest in holding an event at the Hebrew Home. Bronx and Westchester Rep. Eliot Engel, who has close ties to both the Clintons and the Hebrew Home, had suggested the well-regarded retirement home as the site for a speech.

The morning of the speech, the executive director walked the former president from his car to a curtained area behind a stage erected inside the Hebrew Home’s Reingold Pavilion for the event. Ms. Solomon, and a bevy of local elected officials, joined Mr. Reingold backstage. It was time for another elevator pitch.

“I just said that we need his help and Hillary’s help,” said Ms. Solomon. “Primarily, it’s a women’s issue, but it affects men as well. It’s really important that given those numbers and the fact that elder abuse often results in elder adults going into poverty and then needing support from the government, that we work on the front end as opposed to just doing the kind of the back-end work where they’re already victimized.”

Moments later, Mr. Clinton gave his speech, including the mention of elder abuse among crowd-pleasing lines like, “I am so glad to be in the place where grandparents’ day was first celebrated, because I’ve been one for a year and a half and it’s a pretty good deal.”

“Our goal is not to be groupies,” he said. “This is about conveying a message about the need for greater respect for older adults in general, greater support to combat elder abuse specifically and also recognizing the importance of the non-profit organizations and how they are stepping up.”