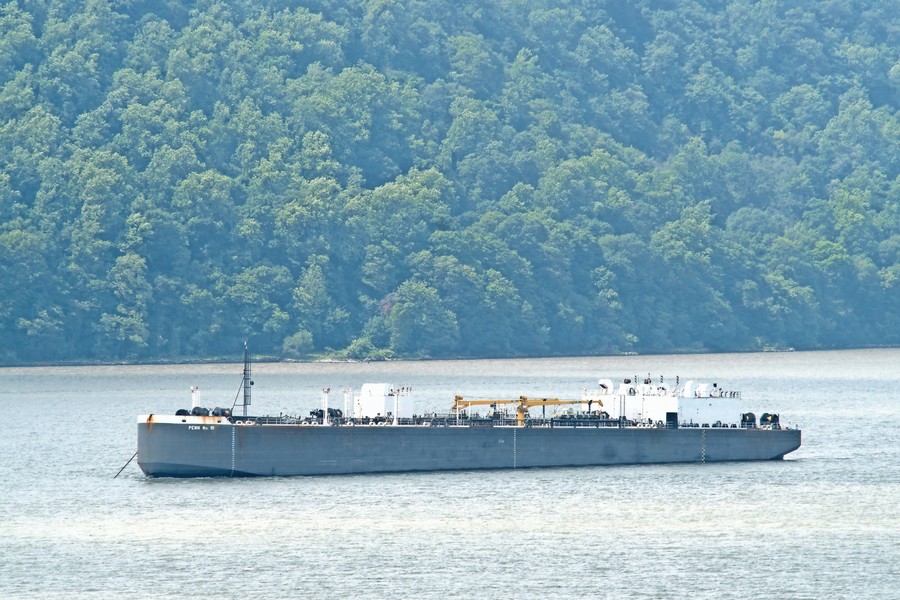 The Coast Guard last week announced they suspended all ‘rule-making’ decisions over a proposal for 10 additional anchorage sites along the Hudson River. The request, which came from the maritime industry, has met significant backlash by the community.
Julius Constantine Motal
By Alexandra Hutzler

There won’t be any new places to anchor along the Hudson River. At least not for the foreseeable future.

The U.S. Coast Guard announced last week they delayed a decision on granting 10 additional anchoring site requests along the river. Instead, they will conduct a study to gain a clearer understanding of safety and environmental risks of the waterway, before conducting an informational workshop in the fall.

“This whole process is an inclusive process,” Allyson Conroy, a chief warrant officer for the Coast Guard, said. “We want to include all of the people that use the Hudson on a regular basis.”

Right now, there is just one federally reserved anchorage ground for ships in the 70-mile stretch of the Hudson between Yonkers and Kingston. That site, however, closes for a three-month span between December and February each year.

The sites are similar to rest stops on an interstate. They allow ship crews to take breaks or handle emergencies. Mariners are concerned they’ll be stuck in no-man’s land if they get caught in extreme weather, or experience some other kind of problem.

The proposal introduced last year would allow for 10 additional sites along the river from Yonkers to Kingston. The Coast Guard allowed the public to weigh in on the matter, and in the process received more than 10,000 comments in a six-month span, according to the military branch. A vast majority of that feedback — around 90 percent — was negative.

“This issue is not new,” Conroy said. “What is unique is that we were able to garner so much feedback and conversation.”

The maritime industry itself requested the additional sites, claiming safety concerns along the river were at an all-time high.

John Lipscomb, vice president of the nonprofit Riverkeeper, suggested the maritime industry is more like the boy who cried wolf.

“By playing the safety card, it’s a scare tactic,” Lipscomb said, noting that if a vessel truly was having an emergency between two anchorage sites, they always could call the Coast Guard and be granted permission to anchor.

The Maritime Association of the Port of New York and New Jersey also had another reason for the additional anchorage sites: an increase in crude oil trade after the government lifted a federal ban on such shipments in 2015.

“We are talking about transport of a product that cannot be cleaned up,” Lipscomb said. “The Hudson has given enough to industry over its life. We’re saying no more.”

There are seven communities along the Hudson that use the river as a water source, like Rhineback and Poughkeepsie. An oil spill, Lipscomb said, could ruin the drinking supply for about 100,000 people.

Even without leaks, the actual anchoring itself could create problems, especially for species that live at the bottom of the river. The effect on local commerce — notably the food industry and property values — is something to be considered, Lipscomb added.

“We have a system that works, without additional barges,” Lipscomb said. “The reasons given for it strikes the public as disingenuous.”

The Press reached out to several maritime industry associations, such as the Maritime Association of the Port of New York and New Jersey and, as well as barge and tug operators, but did not receive a response.

Steven Poulin, commander of the first Coast Guard district, stated in a realease that any further rule-making will be done through a “transparent process of public notice and comment.”

Roland Lewis, president of Waterfront Alliance, suggested the best way to move forward is through compromise.

“One that will satisfy safety concerns but won’t be an impingement of the beautiful Hudson that’s still recovering (from) a sorry past of industrial overuse,” he said.

The Waterfront Alliance, a nonprofit organization that works to protect and revitalize New York’s waterways, has become a common ground for discussion from both aisles: Those that support the anchorages and those that oppose it.

They’ve started conversations between tug and barge transport companies and environmental protection agencies. The ultimate decision, Roland said, will come from the Coast Guard itself.

“The Coast Guard lives, sleeps, and breathes this stuff,” he said.

“They are the experts.”