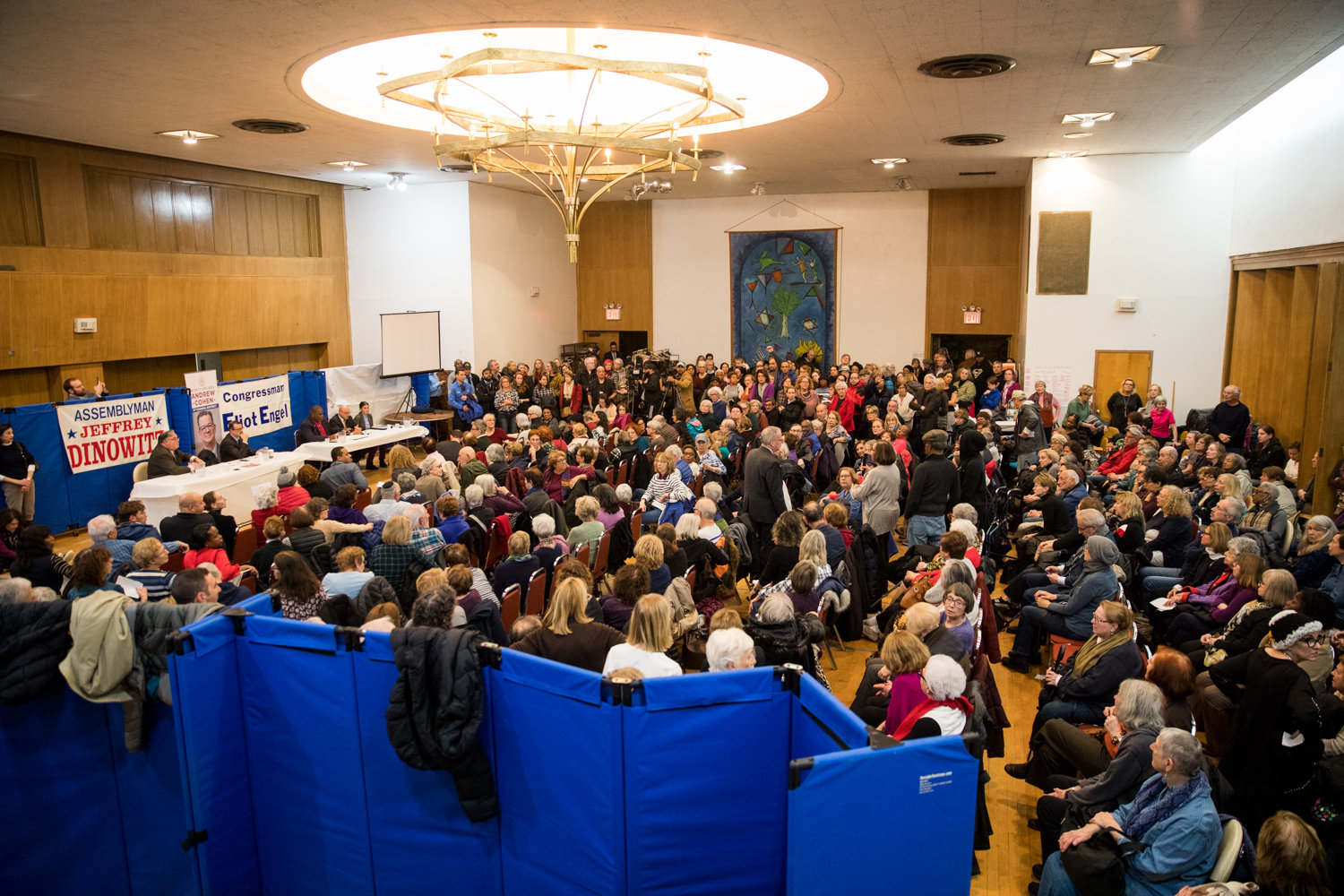 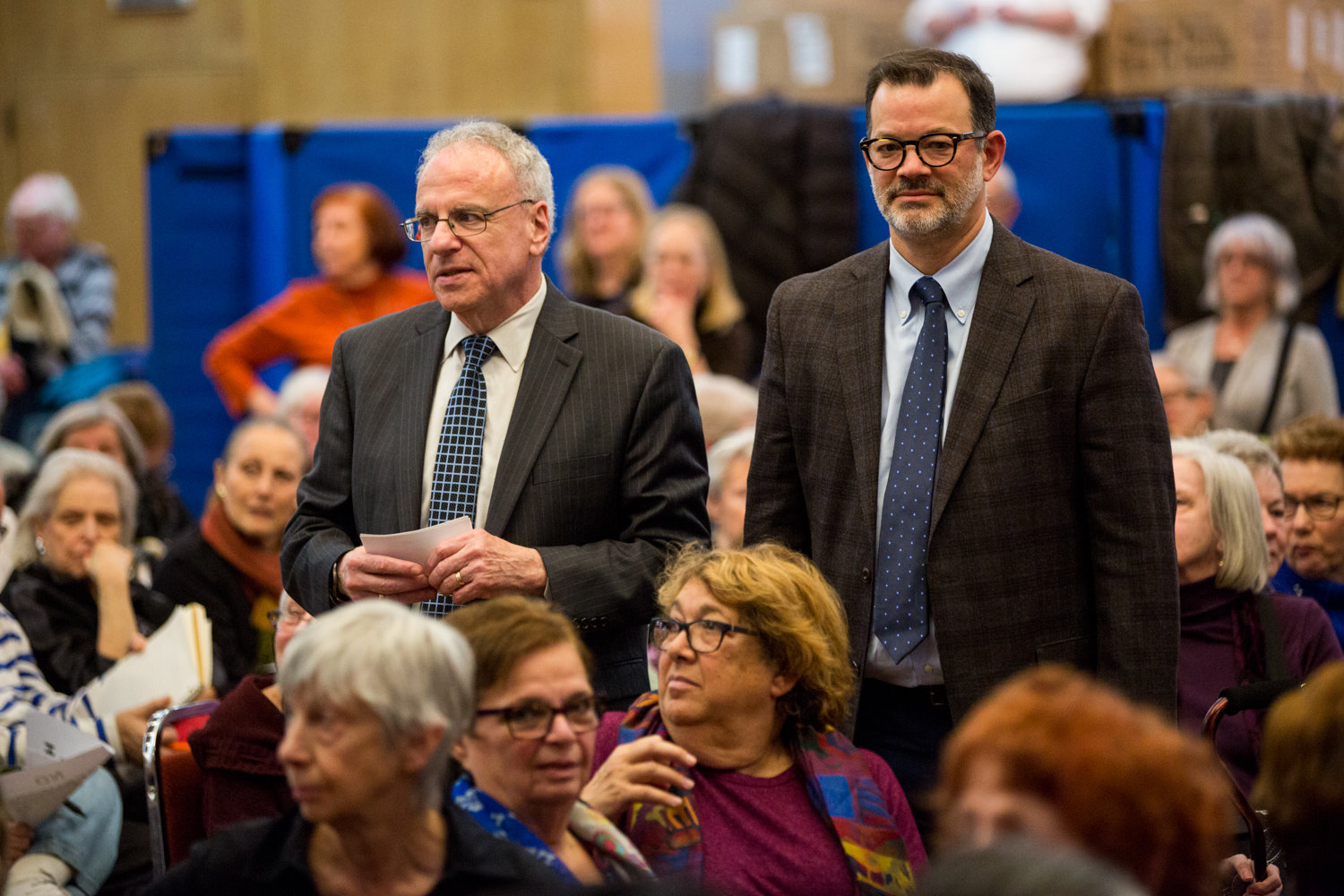 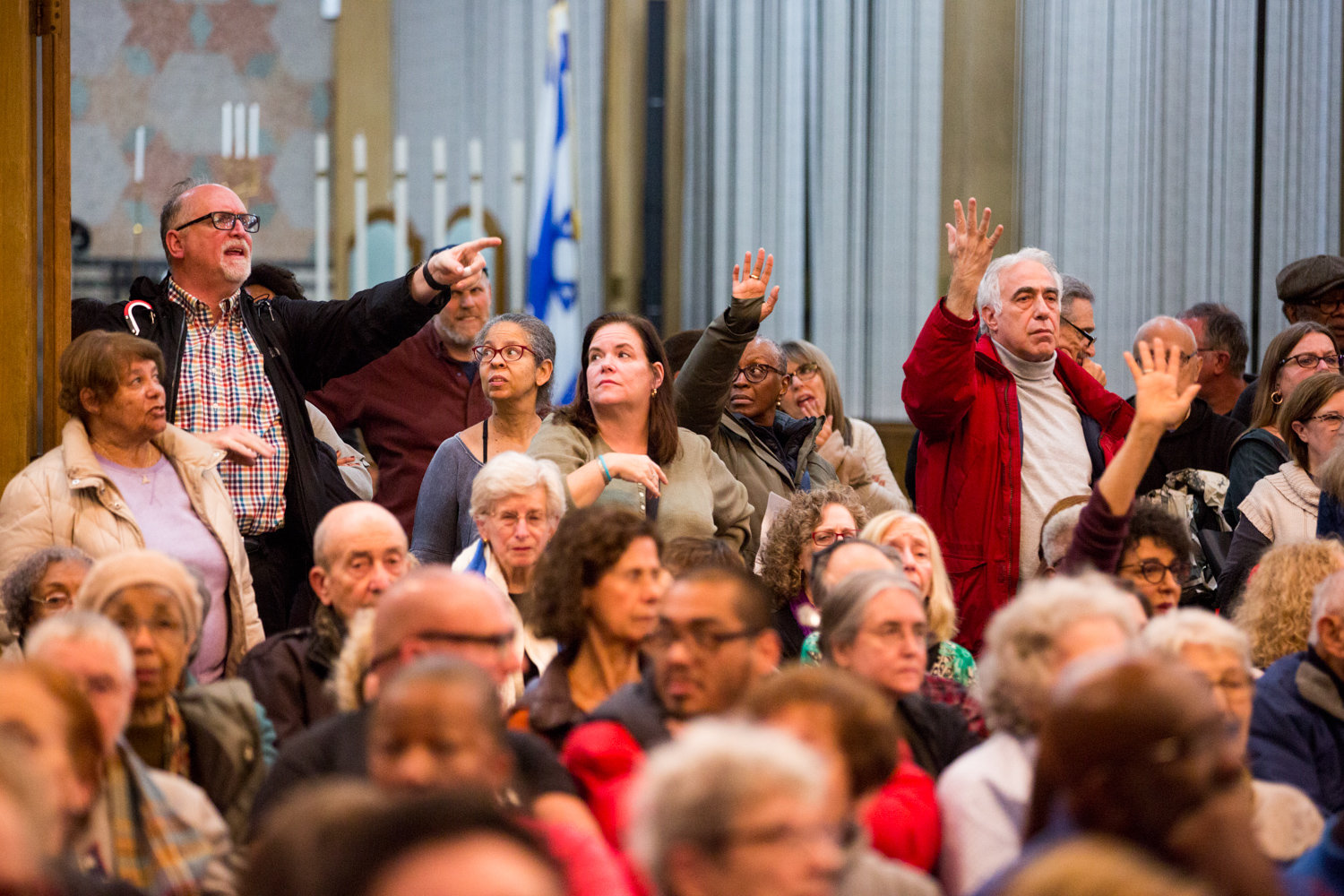 Community members clamor to have their questions heard during a Monday meeting at Riverdale Temple about proposed cuts to express bus service. It was there some Metropolitan Transportation Authority officials gave the rationale behind the proposed redesign of the Bronx’s overall bus network.
JULIUS CONSTANTINE MOTAL 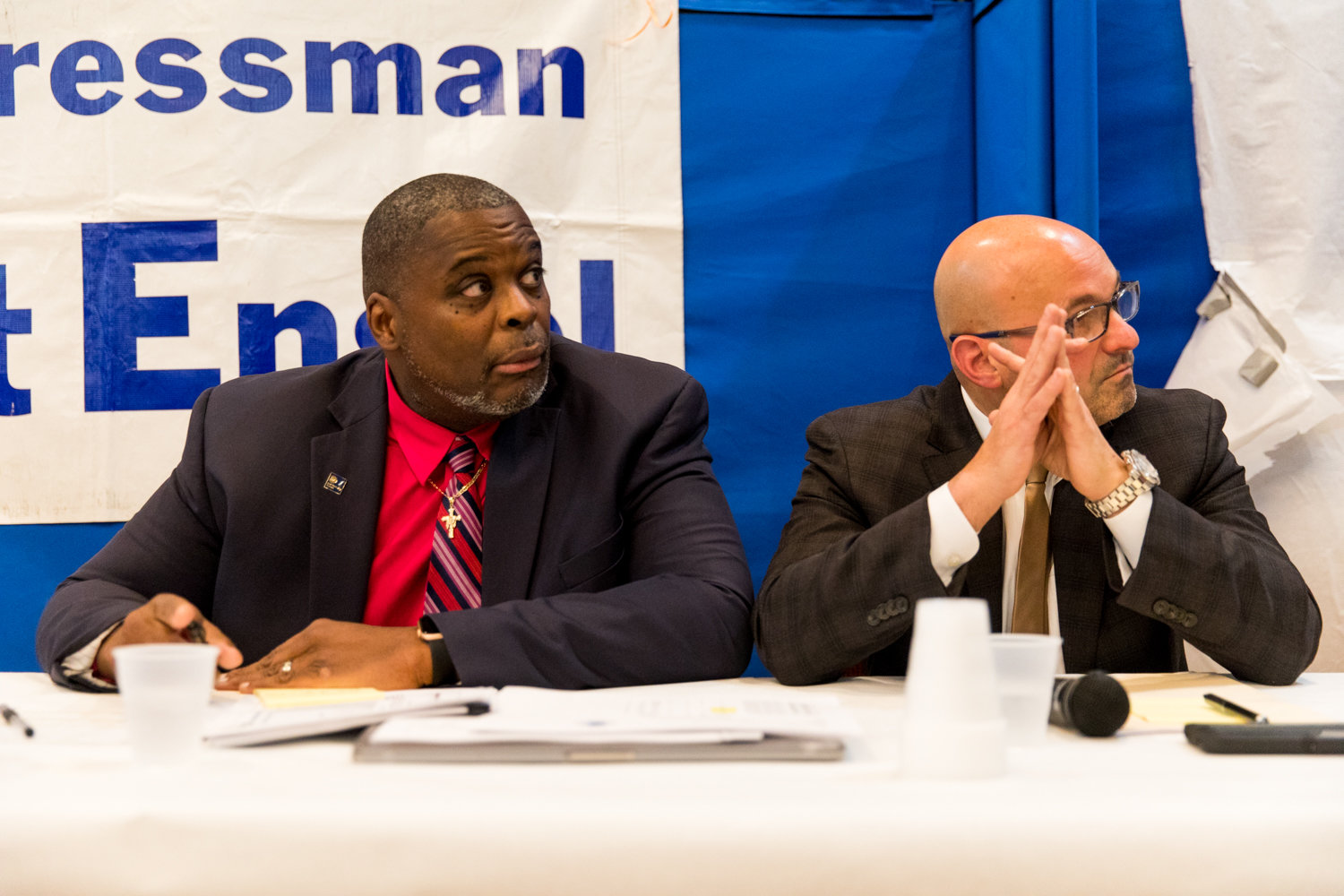 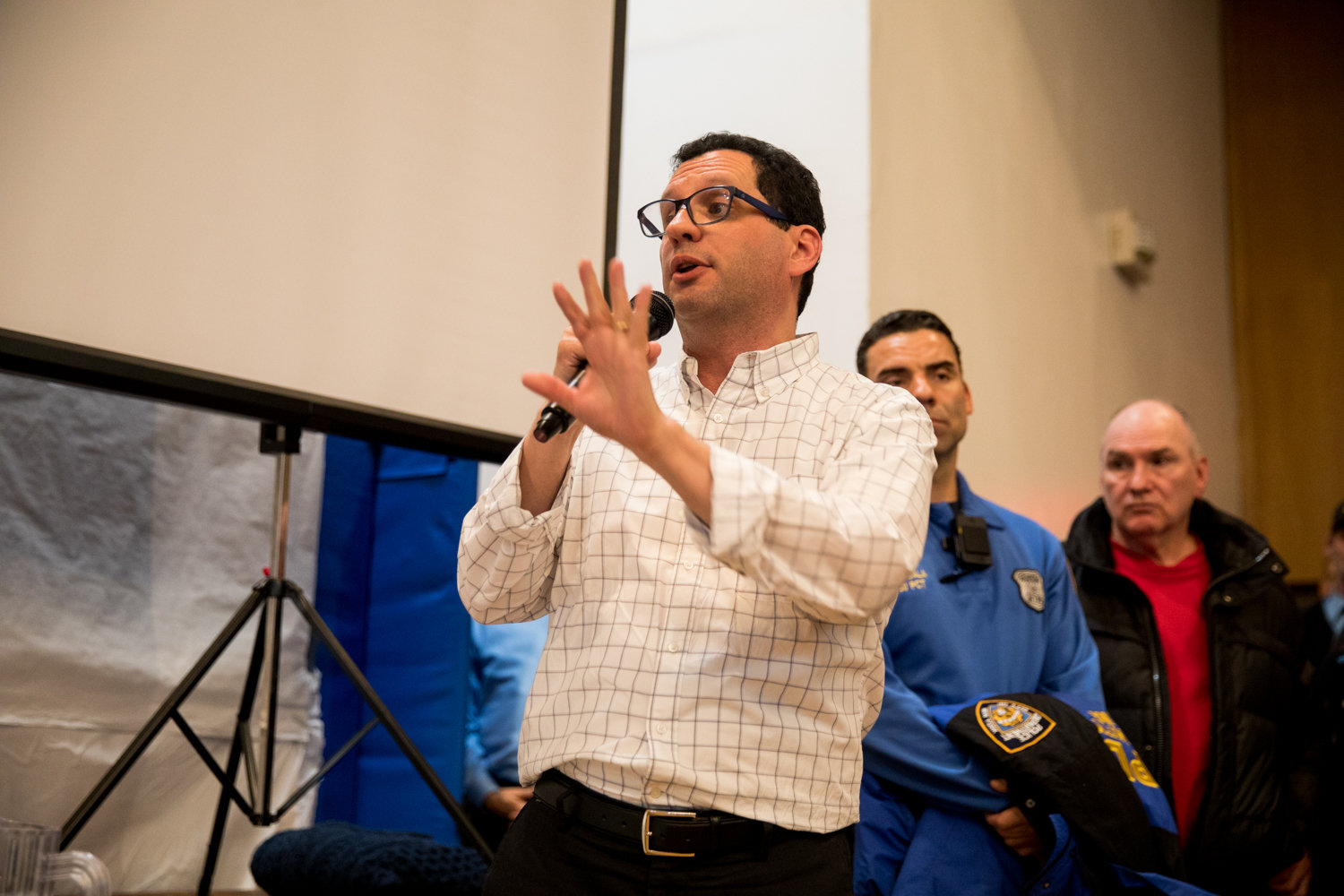 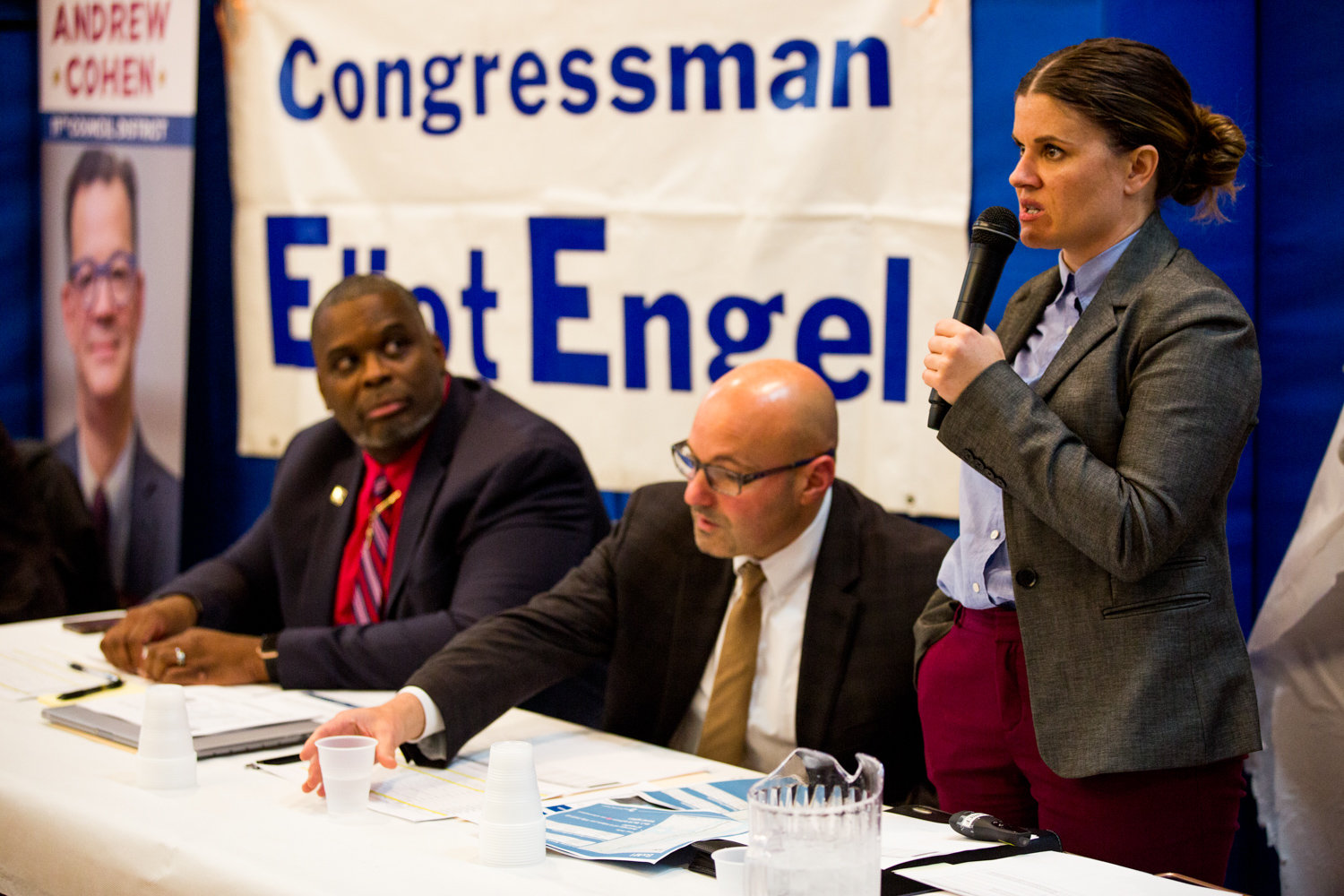 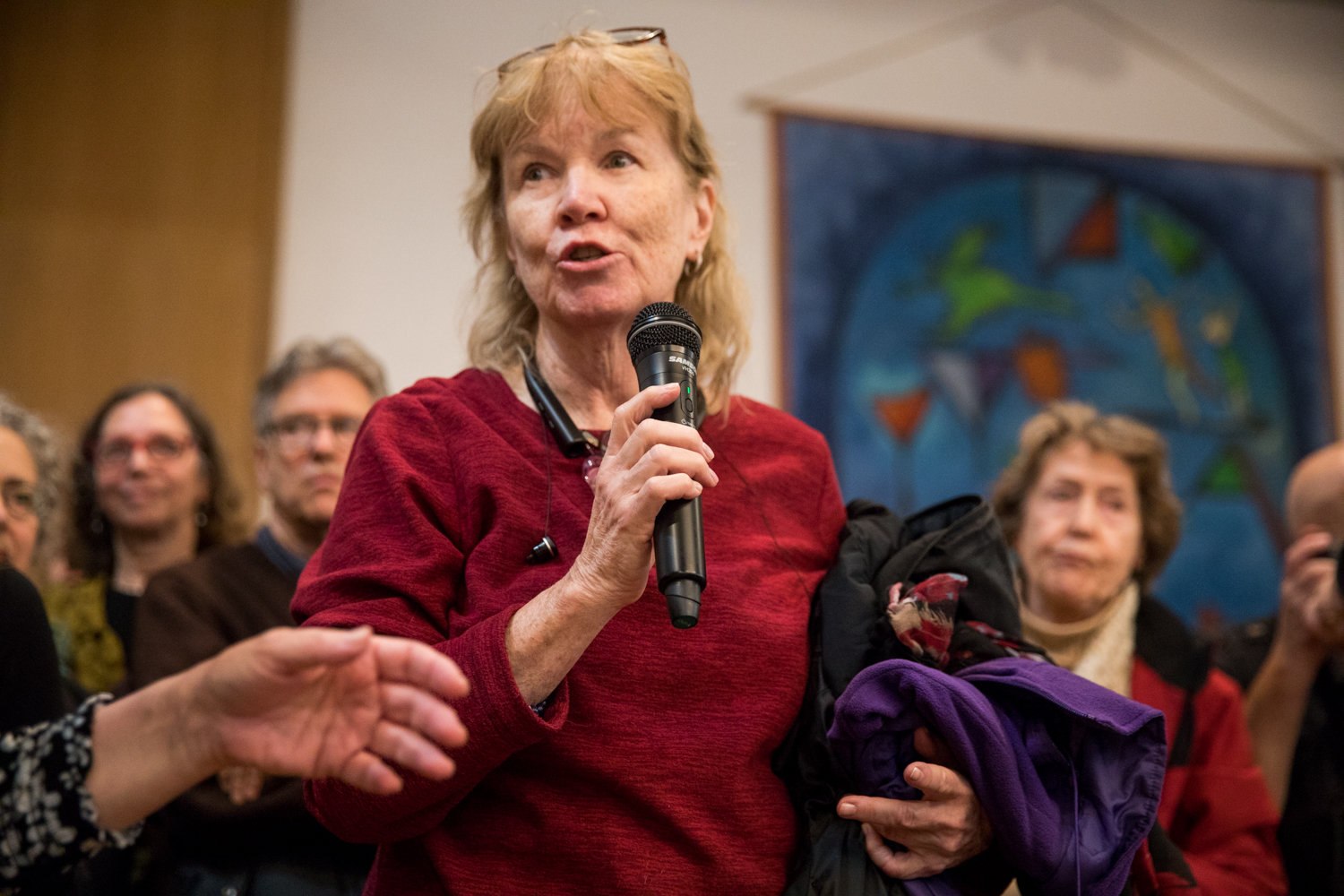 Hundreds of express bus riders and supporters packed an emergency meeting at Riverdale Temple with seemingly one goal in mind: To convince the MTA not to cut express bus service that connects their Bronx communities to Manhattan.

Weeks after the Metropolitan Transportation Authority released what it billed as a “final plan” to redesign Bronx buses, elected officials called for the Monday meeting, inviting MTA representatives to talk about why they’re wanting to make the changes, and to allow people like acting MTA bus division president Craig Cipriano to listen to feedback from the very people who depend on mass transit.

It was a meeting that just had to happen, according to Assemblyman Jeffrey Dinowitz. The biggest source of that ire comes from plans to end Manhattan-bound service on both the BxM1 and BxM2 in the late afternoon, while limiting the BxM18 to a small window of one-way trips in the morning and evening.

The meeting itself was standing room-only, to the point three women — Polly Schoenfeld, Phyllis Katz and Lenoire Brugger — had to find spots on the synagogue’s floor along a wall while they waited for the meeting to begin on Monday.

“I moved to Riverdale from another part of the Bronx in 1970,” Schoenfeld said. “In 1971, Riverdale express bus service started. I worked on the east side, I don’t drive, but I have a lot of things that I do in Manhattan. Without the bus, I really couldn’t stay in Riverdale.”

Cutting bus service was at odds with a more recent emphasis on decreasing cars and driving in the city as a whole, she said, especially in Manhattan, where state officials are getting ready to implement congestion pricing for certain parts of downtown.

But if there are many people who depend on express buses past peak times, they aren’t riding the bus. MTA representatives said most express buses averaged just four riders during off-peak times — leaving another 53 empty. If each of them were paying the full $6.75 fare, that means each trip generates just $27 in total revenue — compared to the more than $350 generated with a much fuller bus.

Comparing that revenue with the cost to run the bus — from the gasoline to paying the driver — isn’t making a lot of economic sense, they added.

While Dinowitz can’t dispute ridership numbers, he wants to encourage more people to ditch their cars and take mass transit. Cutting express bus service so dramatically, however, could push people to drive into Manhattan.

Schoenfeld and Katz agreed, saying that without the express buses, they would likely skip the bus and just take a car downtown.

Marcos Soler — vice chair of the drivers union stationed out of Yonkers bus depot where many express buses originate — said he doubted those numbers.

“I’m not saying that the bus is loaded, by far. But it’s not four customers,” Soler said. “Sometimes it goes up, sometimes it goes down. You still have people that work in the city. I have doormen who take the bus. They say, ‘I’m making it late, but at least I’m making it faster than the train.”

New routes, not better ones

While cuts to service were the most contested issue, riders also are concerned about the routes buses will take if MTA’s changes are implemented. The BxM2 and BxM18 will both be rerouted down the Henry Hudson Parkway from their prior routes along the east side of Central Park, where they originally stopped at Mount Sinai Hospital.

Changing the route, he said, would cut off those patients from their medical providers as there are few other options from the Bronx down Fifth Avenue besides the 4 train, which would require a trip to the Grand Concourse.

Servicing Mount Sinai is something MTA is trying to solve, Cipriano said, but did not have any specifics he could share at Monday’s meeting.

In fact, she added, nothing the MTA has planned surrounding the bus route changes are acceptable.

“It’s fine how it is, and it should be left exactly as it is,” Karig said. “They should find the money that they want in cutting some of those executive positions at the MTA. That’s where the money should come from.”

Drivers will be the ones to suffer, Soler said, and already do when they’re forced to take alternate routes to speed up travel, especially during traffic rushes.

“You get the customers irritated, now they start getting aggravated at you,” he said. “You’re creating a situation that’s hurtful for the driver, not for the MTA. The face of the MTA, in the moment, is you.”

In fact, the union rep said he wished the MTA had spoken with drivers and depot managers before finalizing the plans, especially since they’re the ones on the ground each day in the buses.

State Sen. Alessandra Biaggi couldn’t make it to Riverdale Temple, but told the hundreds of people in attendance at Monday’s meeting she was tired of the Bronx not being prioritized by city agencies.

“They have lacked and lost public trust,” Biaggi said of the MTA. “They had the opportunity to save money at the expense of Bronx residents. Over and over again, the Bronx is put at the bottom of the list for so many things.”

The plan is not completed, Cipriano emphasized, and will go through months of adjustments. The MTA expects to host community meetings of its own, to take local criticisms into account and look for potential solutions before the overall plan is set to go into effect next fall. That includes a visit to Community Board 8’s traffic and transportation committee on Dec. 19.

Those were sentiments echoed by New York City Transit president Andy Byford in a letter to the editor published this week by The Riverdale Press.

“We must use our limited resources efficiently and effectively, which means recognizing that our Bronx express bus service requires close attention,” Byford said in his letter. “The vast majority of ridership occurs during peak periods, and off-peak ridership has plummeted. We are proposing to cut some service during off-peak times as a result.

“I can assure you, personally, that we have planned alternatives routes for the small number of customers affected.”

Those “alternative routes” are going to be influenced by what riders are saying, Councilman Andrew Cohen said. And Monday’s meeting was a perfect opportunity to start hearing that response.

“President Byford, to his credit, told us that getting feedback was an important part of this process,” the councilman said. “And we are providing them with ample feedback.”