Inside the fight to save the city's cats 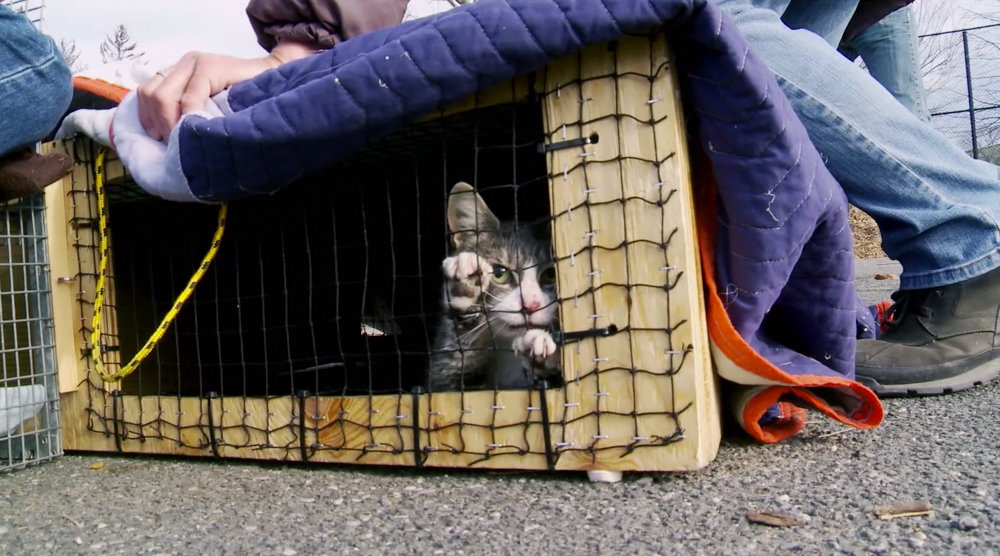 A cat paws at the mesh of a trap in a scene from the documentary film ‘The Cat Rescuers.’ The cat is later taken to a vet to be spayed or neutered, as well as vaccinated.
Courtesy of Rob Fruchtman & Steve Lawrence 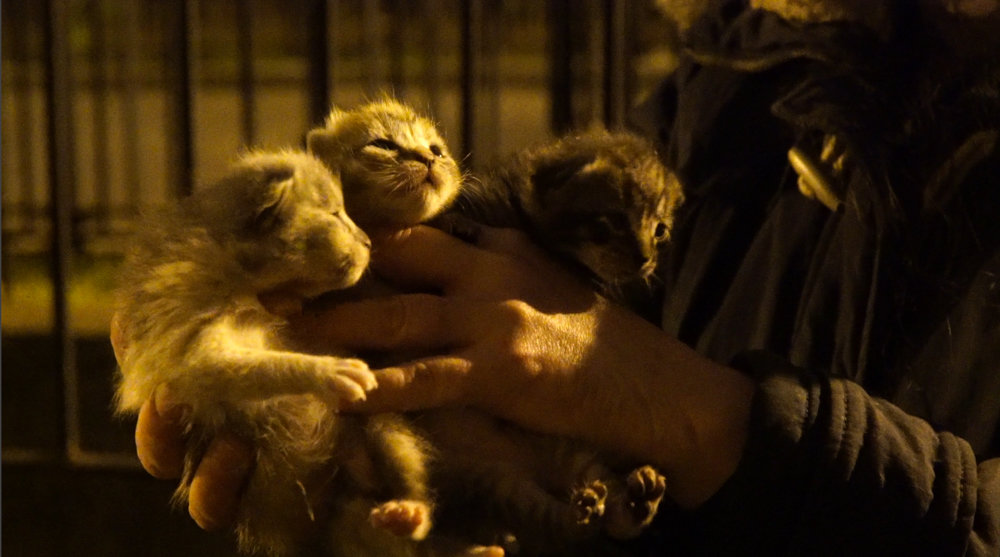 ‘The Cat Rescuers’ is a documentary that tells the story of four volunteers in Brooklyn who engage in trap-neuter-return, a process that helps manage stray cat populations.
Courtesy of Rob Fruchtman & Steve Lawrence 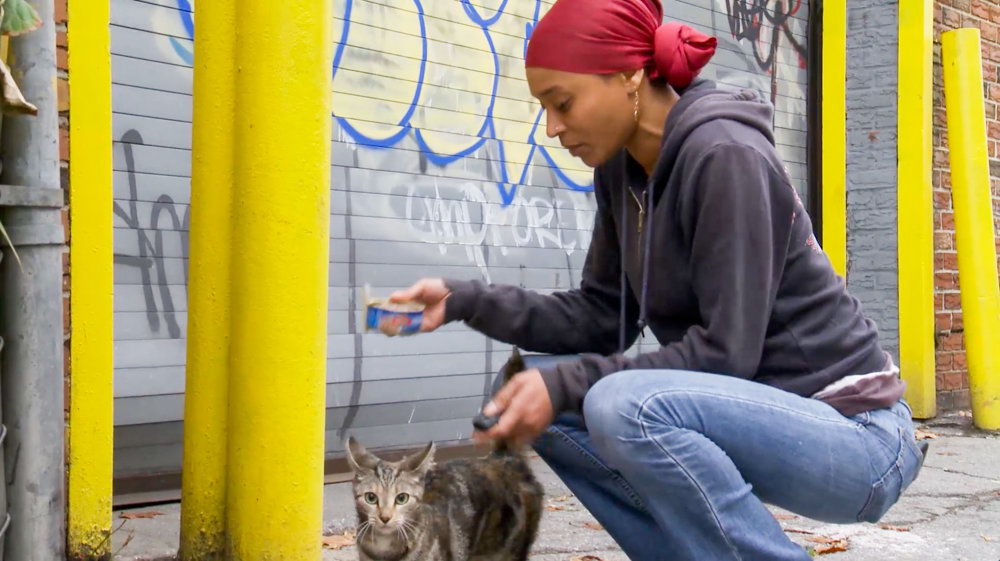 Latonya ‘Sassee’ Walker feeds an injured feral cat in a scene from the documentary ‘The Cat Rescuers.’
Courtesy of Rob Fruchtman & Steve Lawrence 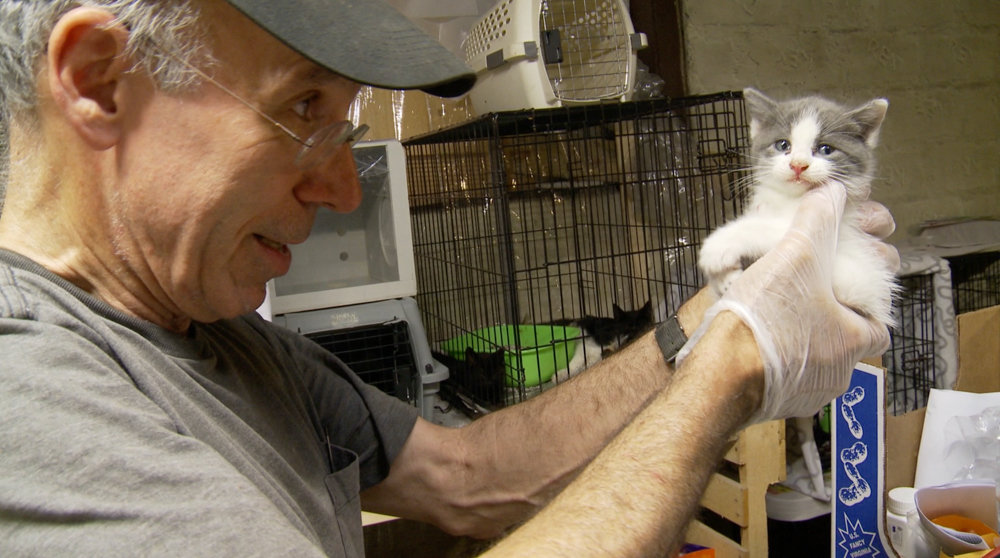 Stuart Siet holds a kitten in a scene from ‘The Cat Rescuers,’ a documentary profiling four volunteers in Brooklyn who engage in trap-neuter-return, a process that helps manage stray cat populations. The film has its theatrical release July 5 at IFC Center in Greenwich Village.
Courtesy of Rob Fruchtman & Steve Lawrence 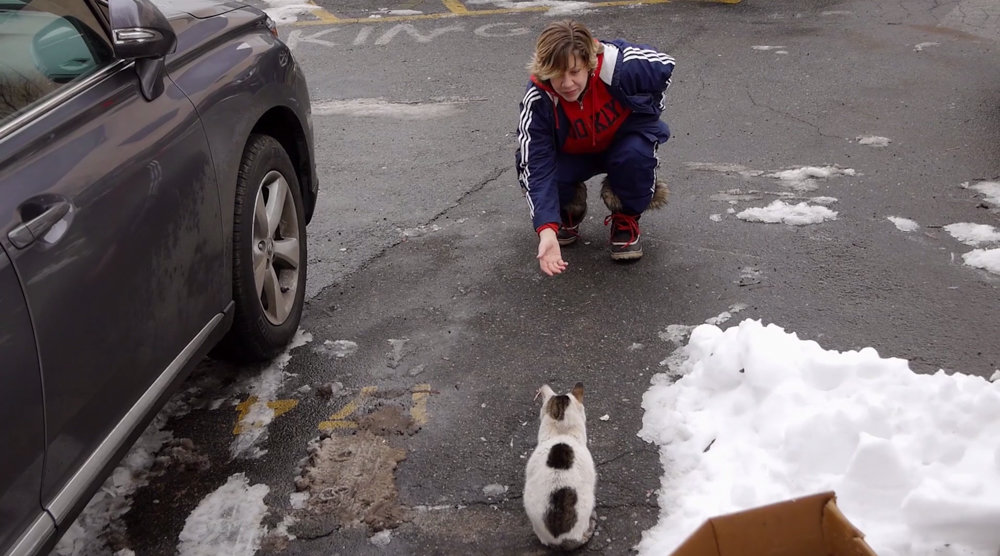 Tara Green gestures to Cloudy in a snowy parking lot in a scene from ‘The Cat Rescuers,’ a documentary profiling four volunteers in Brooklyn who engage in trap-neuter-return, a process that helps manage stray cat populations.
Courtesy of Rob Fruchtman & Steve Lawrence
Previous Next
If you go ...

WHAT: "The Cat Rescuers" premiere

It began with a mama cat.

Latonya “Sassee” Walker would see the same mama cat every time she walked her dog near her Carnasie home in Brooklyn. She would try to help the kittens, but after a while, the same cat would be pregnant again.

“It got to the point where I was becoming depressed to walk the dog,” Walker said.

For a time, Walker tried different routes in order to avoid the scene of an eternally pregnant cat. But as fate would have it, the fertile feline kept appearing, no matter how many detours she took.

So Walker started asking around for ways to help. One connection led to another until she finally learned about trap-neuter-return, an increasingly popular way of managing a given area’s stray cat population. A stray cat is captured, brought to a veterinarian to be vaccinated and spayed or neutered, and then released back into the area it was caught.

“I think that if I didn’t do something,” Walker said, “nothing was going to change.”

The more she trapped, the better she got. Year over year, the number of cats Walker rescued has grown as the cat population has done the same. When she started in 2011, she rescued five cats a week. Now, that number can be as high as, if not occasionally higher than, 15 a week.

That means overall, in the last eight years, Walker has rescued thousands of cats.

Eventually, Walker crossed paths with Rob Fruchtman and Steve Lawrence, who were looking to direct a documentary about the TNR community. They invited Walker to become part of an ensemble cast of four rescuers.

Filmed over the course of four years, “The Cat Rescuers” is now set for a theatrical premiere at IFC Center in Greenwich Village on July 5.

The documentary was born out of a chance encounter with stray cats. The morning after moving into his new house in Bay Ridge in 2013, Lawrence found a mother cat and her three kittens waiting expectantly at the back door. The previous owners had conveniently failed to mention the block’s preponderance of stray cats.

“When cats want to get fed, they don’t stop staring at you,” he said.

After several hours, Lawrence and his wife Helen relented. They fed the cats.

Of course, feeding a stray cat guarantees that cat will keep coming back. What Lawrence soon learned was that his block was a hotbed of feral felines, and he wanted to learn how to best help them.

His quest for knowledge led him to the TNR community, and it is in that community he saw a story worth telling. After meeting many rescuers, Lawrence and Fruchtman found the four people they would focus on — Walker, Stuart Siet, Claire Corey and Tara Green.

The four rescuers are representative of a much larger patchwork network of ordinary people going to extraordinary lengths for no money to help the city’s cats. There are as many as a half-million stray cats across the five boroughs, according to a 2016 estimate by the Mayor’s Alliance for NYC’s Animals.

“The most important thing is that people know that these cats exist,” said Jackson Galaxy, a cat behaviorist and host of the show “My Cat From Hell.”

They are often out of sight and out of mind for many city dwellers, but the film shines a light on a sliver of that population.

“As stewards of this city, we have to care for them,” said Valerie Volinski, a writer, photographer and spokeswoman for her social media celebrity cat Mrs. Parberry, a former rescue. The two will host a screening and panel discussion with the rescuers and directors at IFC on July 7 at 3:35 p.m.

That care can come in a form that can be startling to cats, but is ultimately for their benefit. Trapping is a delicate, high-wire act that can happen quickly or slowly. It often involves a bowl of food inside a cage or a box set to entice a nearby feline.

Once it enters the enclosure, a door snaps shut. The cat, suddenly aware of its new surroundings, scampers within its new boundaries until the trapper approaches to calm it down before taking it to a vet for necessary health care it wouldn’t otherwise get.

“Trapping is an art,” Lawrence said, “and each of the rescuers has their own unique approach to it.”

For the rescuers in the film, their trapping work is a full-time job — in addition to their full-time work that actually pays — and the film is a raw portrayal of how existentially difficult that work can be.

Deeply affecting in its portrayal of the rescuers, the documentary grapples with the duality of how fulfilling — and exhausting — rescuing is. Trapping can happen at any hour of the day or night, and trappers often pay out of pocket to get the cats the care they need.

“This should be a job,” Galaxy said.

Until that happens, volunteers — like the ones featured in the film — will continue this hardscrabble labor of love.

“It is, if not a call to action, a call to awareness,” Fruchtman said of the film.

For rescuers like Walker, it certainly would not hurt if more people got involved.

“If we don’t change the mind of the people,” Walker said, “I’m going to be doing this when I’m an old lady.”