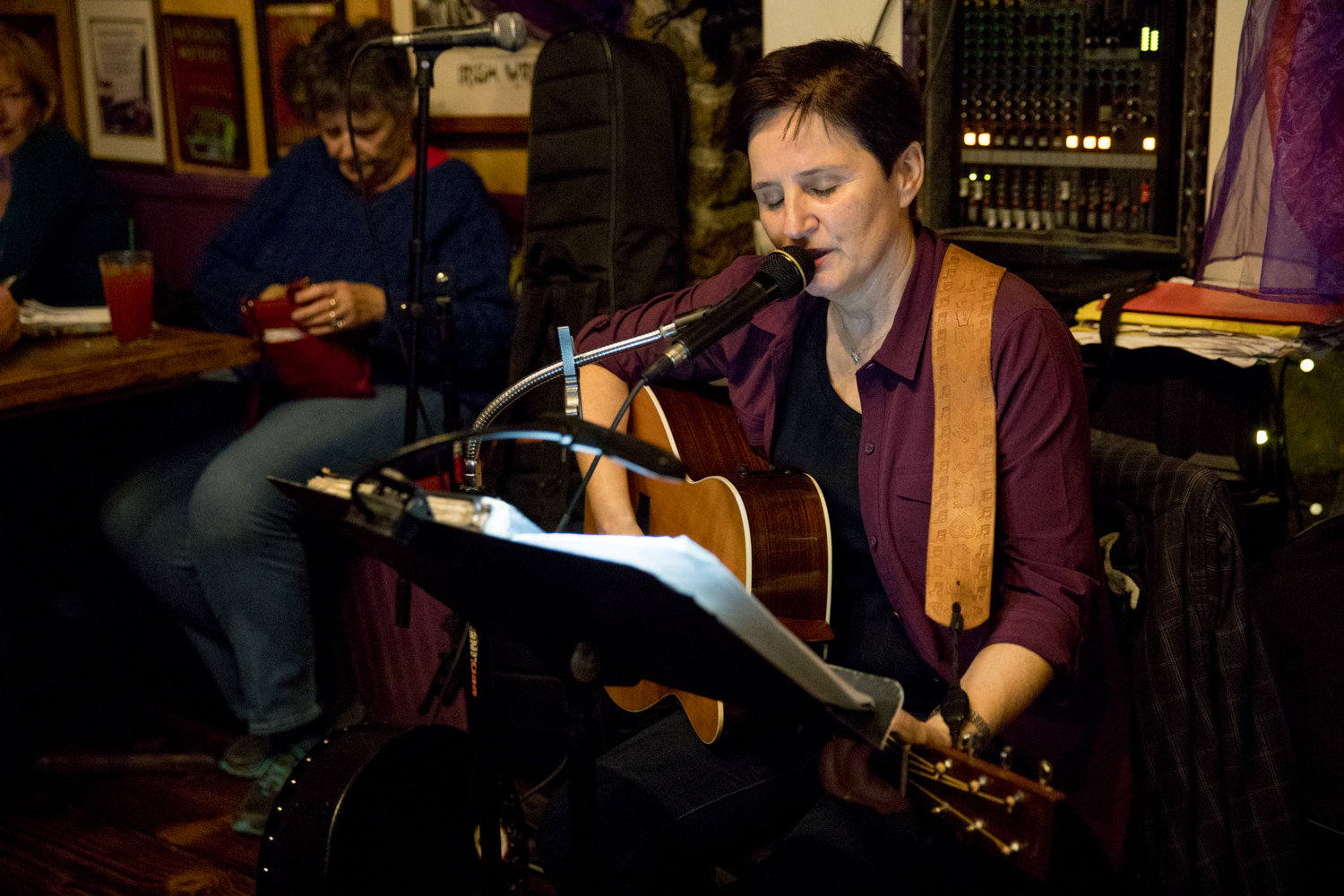 Mary Courtney plays music at An Beal Bocht Café where she is a regular at the West 238th Street venue.
JULIUS CONSTANTINE MOTAL 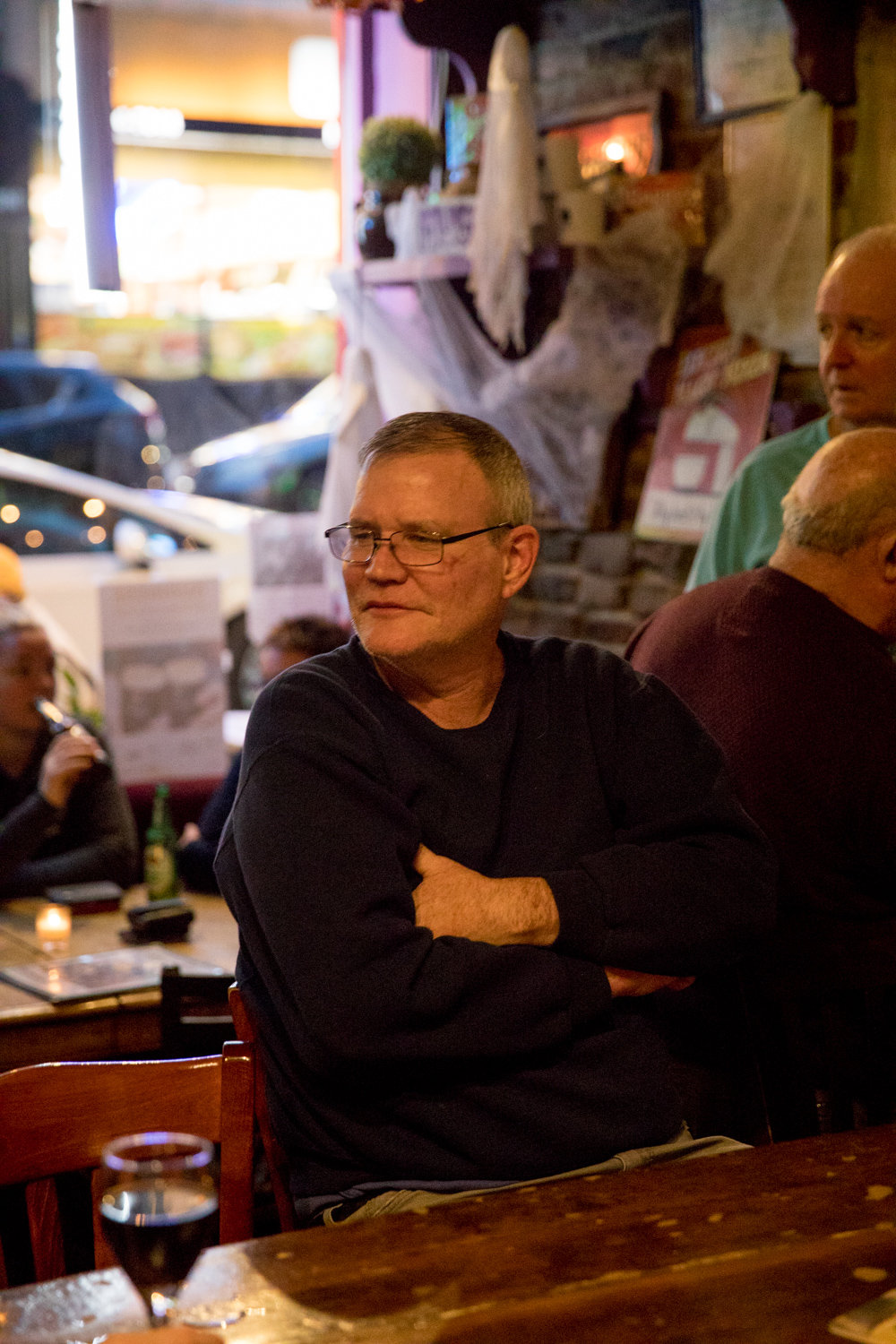 James Powers listens to Mary Courtney perform Irish music at An Beal Bocht Café on West 238th Street, where he is a regular.
JULIUS CONSTANTINE MOTAL 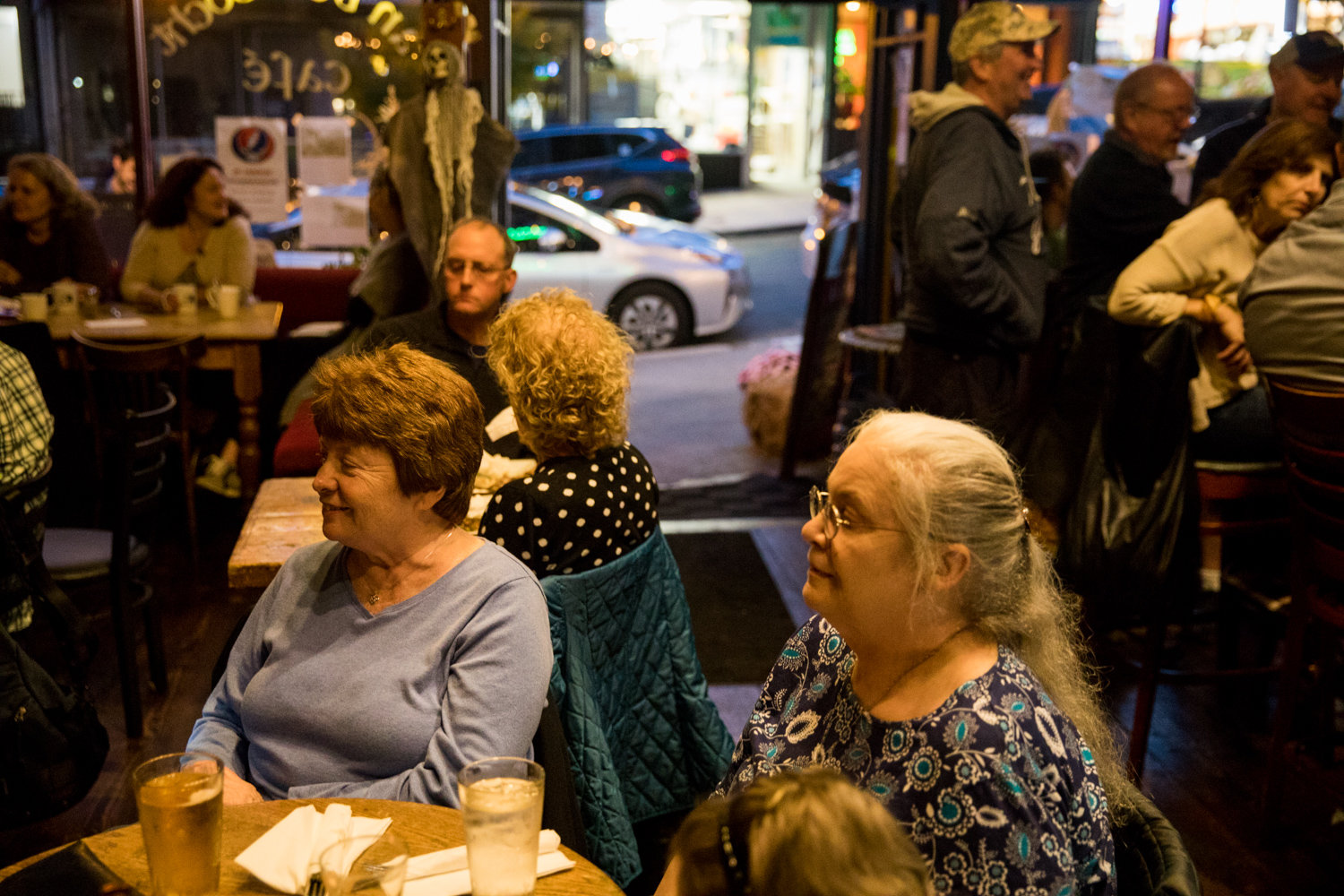 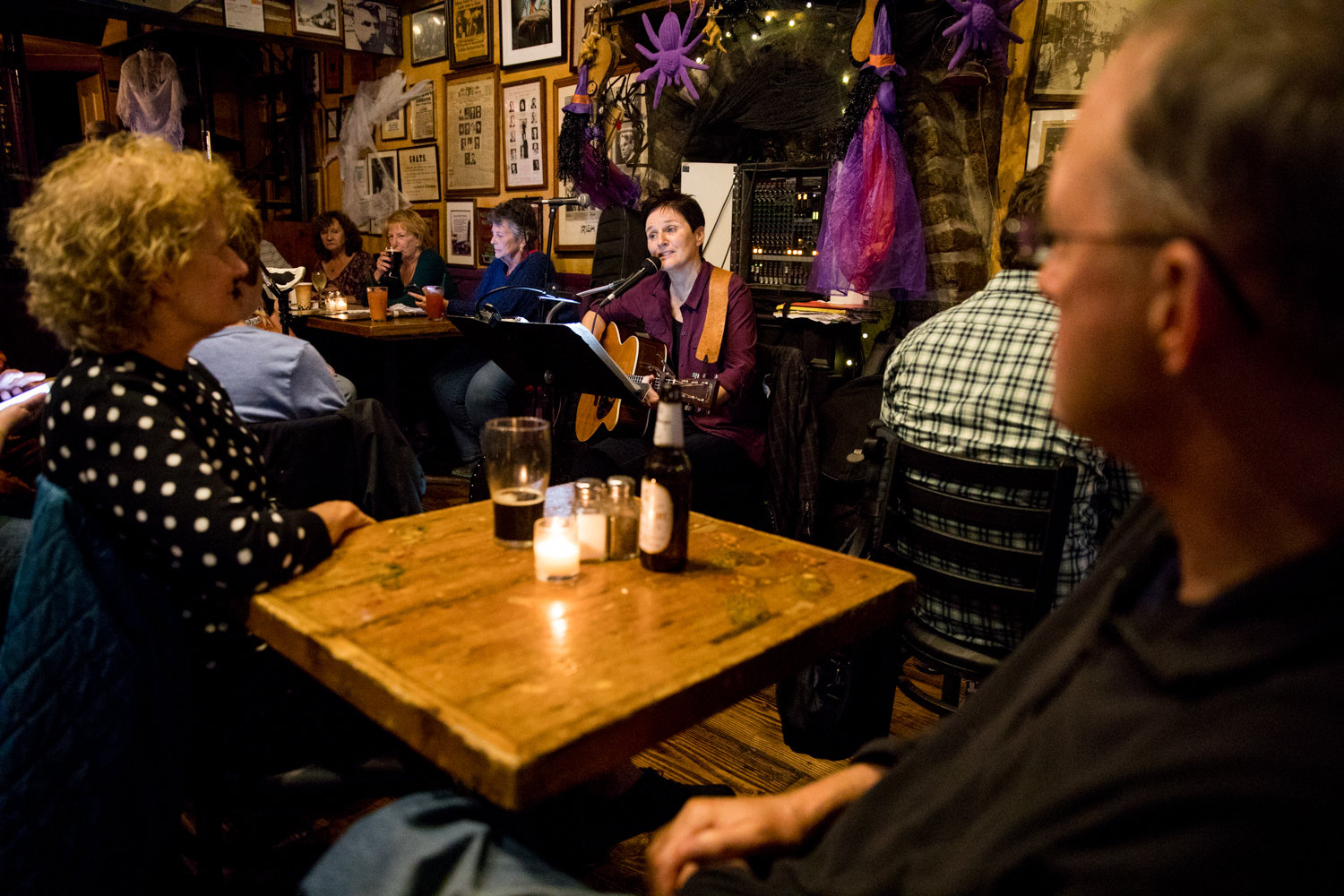 Music fills the space at An Beal Bocht Café every Friday night, which regularly hosts a variety of musical and cultural events, including poetry and theatre.
JULIUS CONSTANTINE MOTAL 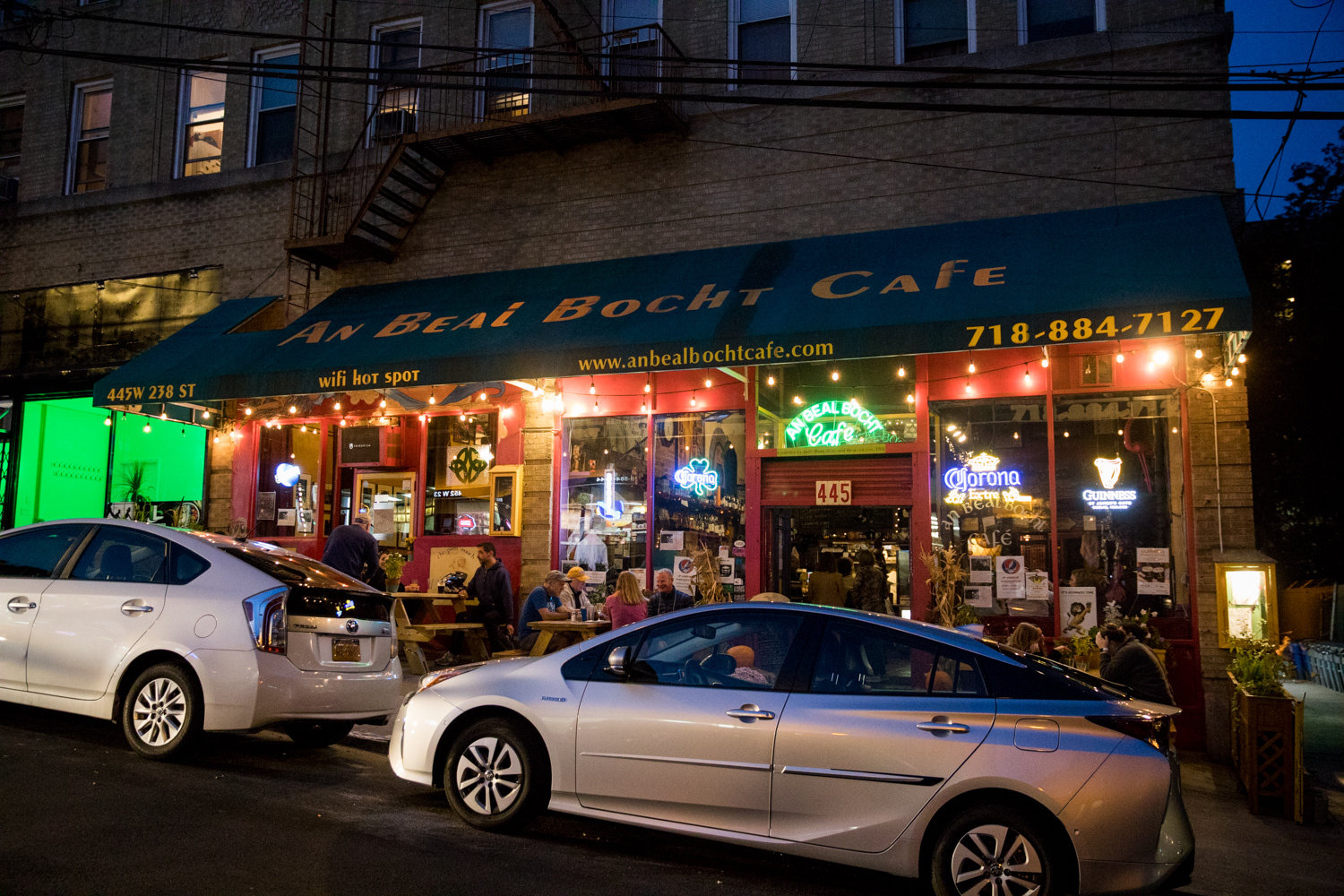 If West 238th Street is known for anything, it is An Beal Bocht Café, a pub with Irish roots catering to the neighborhood with a variety of shows like concerts and open mics.
JULIUS CONSTANTINE MOTAL
Previous Next
By RAPHAEL LASSAUZE

The café is an important fixture in the urban culture. It’s a place where the monstrous echoes of elevated trains and the bustle of frustrated commuters fade away in favor of conversation, contemplation, and a certain sense of calm.

But it doesn’t always need to be quiet.

Entering An Beal Bocht Café on a Friday evening is to be greeted with buckets of laughter and chatter by a wide range of people, many of whom seem to have Irish accents. Manager Brona Harmon dashes from one side of the bar to the other calling out “sweetheart” and “darling.”

A hush flows through the rooms like a fog, and eyes turn toward a chair occupied by a guitarist. She thanks everyone for coming before unleashing an Irish tune full of jaunt and terror, excitement, and a misty sense of loss. With every song, the audience raises up their hands for a round of genuine, appreciative clapping.

This is a regular evening at An Beal Bocht, a multi-room bar, restaurant and performance space on West 238th Street between Greystone and Waldo avenues. It’s been the starting point of dozens of local musicians and storytellers for close to three decades.

“I’ve come up here to perform since 1991,” she said. “I lived in Brooklyn, and I’d come up to the café and play with my three-piece band. But it’s just me now.”

Solitude in the spot between tables in the café’s barroom seems to be a good spot for Courtney, sitting there as the nexus for everyone’s hungry ears.

“I really love it here,” she said. “The people and places are great. I used to live here after Brooklyn, and I miss it quite a lot.”

An Beal Bocht opened in 1991, but not without a few shortfalls along the way.

“The key to a spot like this is no television,” co-owner Tony Caffrey said. “No need for a thing like that over here. There’s something here morning, noon and night.”

Instead of a television, the walls hold the pictures of Irish cultural figures, ranging from sportsmen to novelists, poets to politicians.

“I didn’t really know my culture until I left,” Caffrey said, nodding slowly. “I worked construction like a lot of Irish in the ‘80s. But once I learned my culture, I knew the arts were where I belonged.”

Regular James Powers built the wooden counter at An Beal, and has been an active audience member ever since.

But An Beal isn’t the only treasure chest of performance in the neighborhood.

Just around the corner on Riverdale Avenue is Buunni Coffee, a two-story affair situated right off a Bx7 stop north of West 236th Street. Since opening last year, Buunni has utilized its position as a venue for expression. It was founded by Elias and Sarina Prabasi, who met in Ethiopia, but moved to New York City in 2011, opening their first Buunni Coffee in Washington Heights.

That was followed by a location in Inwood, with a third coming most recently on Riverdale Avenue.

Sarina, a true globetrotter since childhood, has worked in international development for more than 25 years. She also is an author, whose latest book, “The Coffee House Resistance,” has received high praise and solid reviews.

That international comprehension is the ethos of Buunni Coffee.

Community and conversation are at the core of Buunni. At the onset, the Prabasis’ intention was a gathering place, becoming a hub of artistic expression.

Care and conversation between the Prabasis and the community has helped to produce knitting circles, Brazilian jazz performances, and open mic nights.

But sometimes performance is as visceral as a bar fight.

The Punch Bowl is at the foot of the West 238th Street subway station. There’s a pool table in the back, and above it, a photograph featuring the bar’s original incarnation, and an unfinished elevated track. The atmosphere is primordial and cave-like.

A place like that doesn’t seem ideal for a performance space. But bluegrass jam musician Tara Linhardt disagrees.

“When I got here, no one knew what bluegrass was,” Linhardt said recently, readying equipment in an impromptu area by the bar. “I showed them. They liked it, but they wouldn’t dance. But here, people dance.”

The counter on a recent night was filled with jovial laughter and shouting, old friends crowded in the corner. Springsteen blared from the radio, interrupted only by the constant sound of glass breaking. The scent of beer was everywhere.

“This is a fun area,” Linhardt said, with a laugh. “You make friends here.”

Linhardt is a teacher, bluegrass stylist, and the leader of trips to Nepal, yet another place she’s performed. And it’s made Linhardt realize something important about her music.

“People get really lonely nowadays,” Linhardt said, with a nod. “My music makes people talk to each other. That’s so important.”

Linhardt strummed a flurry of high-pitched, fast instrumentation, conjuring images of wanderers trekking winding backroads. People danced and clapped around the Punch Bowl, eventually returning to their drinks before the next song.

Manhattan is often called the center of artistry. But up here in the Bronx, there is a variety of options in close proximity to each other. They’re places near home where people of many ages can make new friends and create more ties with those around them.

“When there’s so much bad news, people are looking for something,” Buunni’s Sarina Prabasi said. “They’re looking for each other, and for a place to listen.”